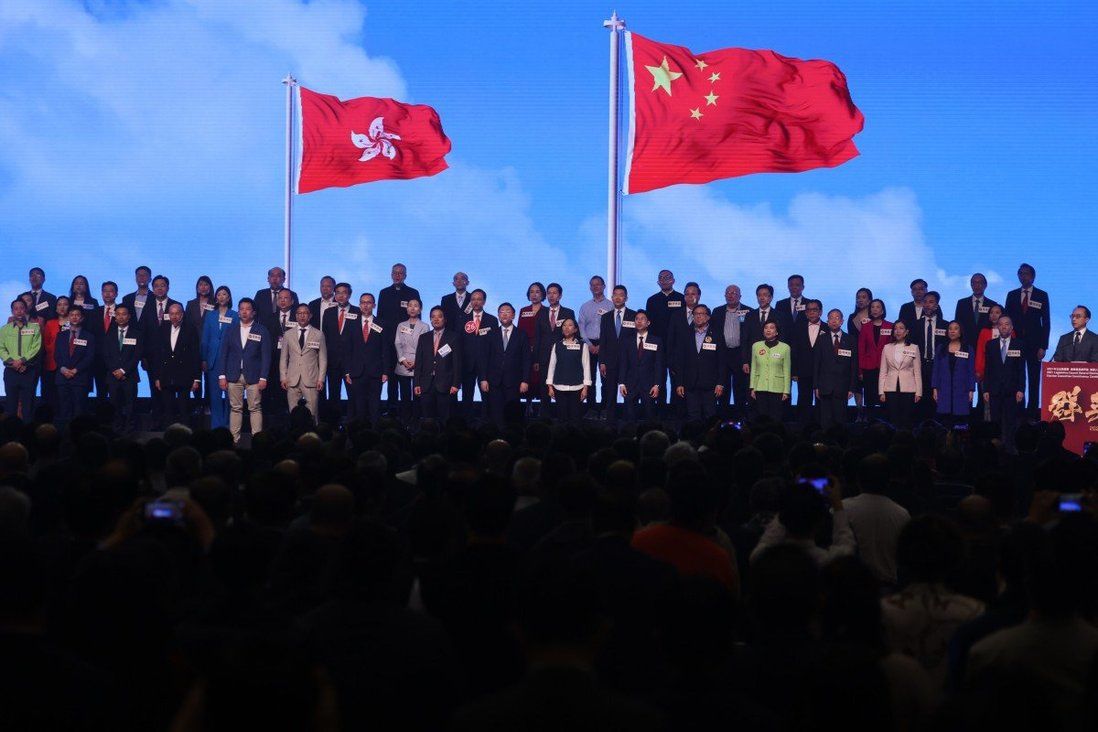 Top politicians say Election Committee voters will make their own decisions in Sunday’s poll, the first since Beijing’s system overhaul.

Pro-establishment heavyweights have dismissed suggestions ahead of Sunday’s Legislative Council election that Beijing has issued instructions on who to vote for, while city officials are ramping up calls at the eleventh hour to boost turnout.

But with just two days until polling stations open, a survey has revealed that a growing number of residents say they are not planning to vote, amounting to nearly 40 per cent of the population.

The December 19 contest – voting in which runs between 8.30am and 10.30pm – will be the first citywide poll since Beijing this year overhauled Hong Kong’s electoral system to ensure only “patriots” could hold power.

Under the drastic reforms, the number of directly elected seats has been slashed from 35 to 20 in an expanded 90-member legislature, with another 30 filled by trade-based functional constituencies.

The remaining 40 seats will be returned by the Election Committee, a powerful body comprising 1,448 mostly pro-Beijing members – fuelling concerns the results could be easily manipulated.

Tam Yiu-chung, the city’s sole delegate to the apex of Beijing’s legislature, on Friday insisted that members were not following orders from anyone as he responded to questions from reporters on rumours that Beijing had provided them with a list of endorsed candidates.

“The some 1,400 Election Committee members will make their own decisions after careful consideration,” said Tam, of the National People’s Congress Standing Committee. “I didn’t receive any instructions as to how to vote.”

Tam was speaking at one of the last election forums of the campaign, in which all 51 candidates from the Election Committee constituency took to the stage at the Hong Kong Convention and Exhibition Centre in Wan Chai to address the more than 1,000 voters with quick-fire, one-minute speeches.

The event was organised by the Hong Kong Coalition, a pro-Beijing think tank.

Some spoke of their commitment to a “renaissance of China’s dream”, while others pledged to apply their expertise – from accounting skills to experience dealing with social issues – to help resolve the city’s deep-rooted problems.

Leung denied receiving a “dim sum paper”, euphemism for a list of endorsed candidates and referred to as such for its supposed resemblance to the layout of menus at yum cha restaurants.

“The central government sees this as the first Legco election since improving the system, so it is not worried about letting voters choose their desired candidates under this mechanism,” he said.

The ballot paper for the committee constituency requires each of the 1,448-strong electorate to choose 40 candidates from a longer list of hopefuls.

Friday’s forum was watched by a spirited crowd of supporters and volunteers, who cheered and raised banners emblazoned with pictures of candidates and their election slogans.

The atmosphere stood in stark contrast to the findings of a survey published by the Hong Kong Public Opinion Research Institute (Pori) earlier in the day that underscored the widespread lack of interest in the race among the general public.

About 39 per cent of the 891 respondents, who Pori polled between December 9 and 14, said they would “definitely” or “most likely” not be voting on Sunday, up three percentage points on a previous edition of the survey conducted in the final week of November.

Only 48 per cent said they would “definitely” or “most likely” cast their ballot, down from the previous 51 per cent. The figure in a similar survey ahead of the 2016 Legco vote was 76 per cent.

Chief Secretary John Lee Ka-chiu and Secretary for Constitutional and Mainland Affairs Erick Tsang Kwok-wai, meanwhile, inspected the progress being made in preparing the central counting station in Wan Chai.

“Voters are encouraged to cast their votes to make the election a success so that forces that aim to sabotage the election will not succeed,” Lee said.

Earlier on Thursday, state-owned media outlet People’s Daily singled out Democratic Party chairman Lo Kin-hei for criticism, accusing him of “hijacking” the leading opposition party and barring its members from running in the Sunday’s poll.

The newspaper said his allies had to be swept aside for the party to have a future. 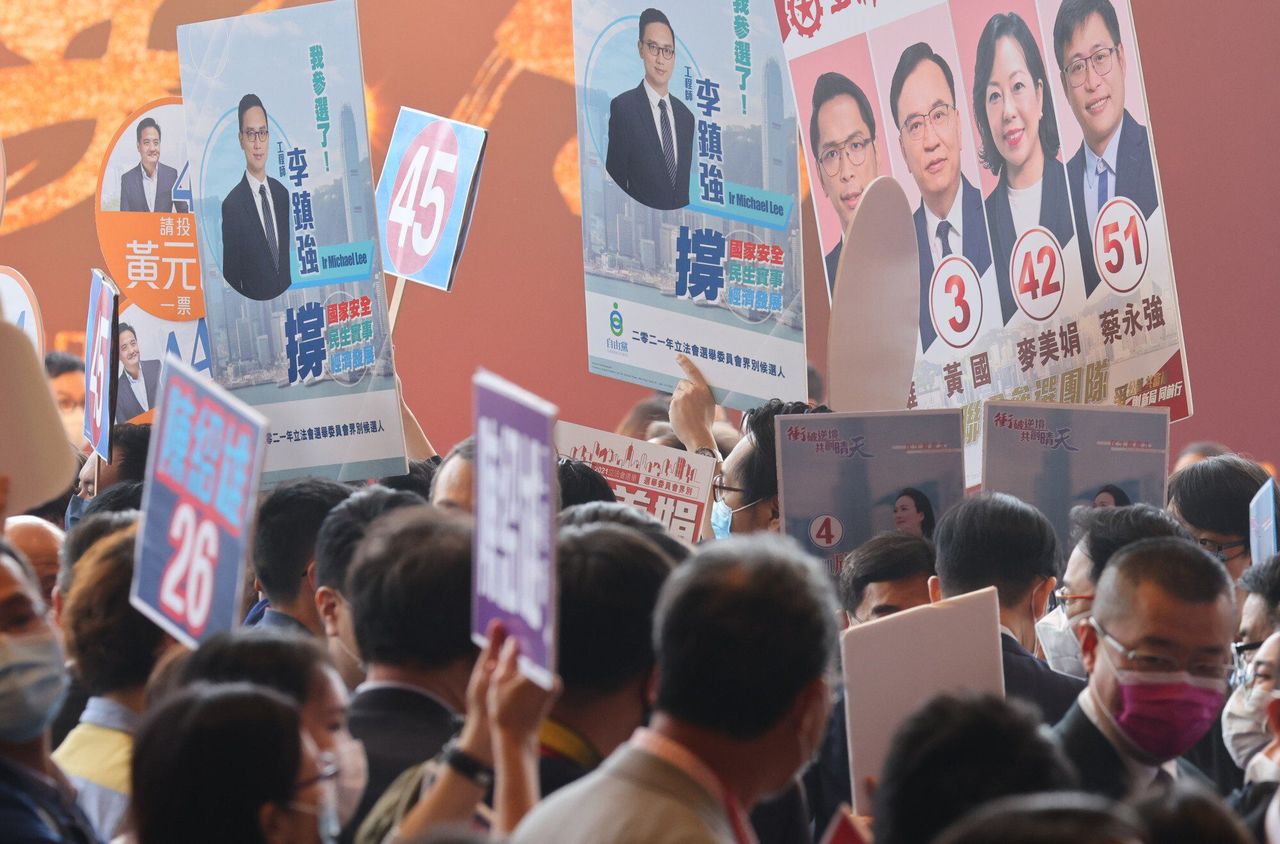 Lau Siu-kai, vice-president of the semi-official think tank, the Chinese Association of Hong Kong and Macau Studies, said he believed that Beijing was further angered by a Democrats plan to discipline members who, acting in personal capacity, endorsed certain centrist candidates.

“Beijing wants to make it clear that it no longer holds any expectation on the Democratic Party, which used to be considered as a moderate grouping,” he said.

“The authorities hope it will not do anything more to discredit the electoral system – such as doing interviews with foreign media – in the run-up to the poll.”

Meanwhile, former Hong Kong leader Leung Chun-ying pledged a HK$500,000 reward for those providing information about a mastermind said to be inciting people to undermine the election, following police suggestions of a figure operating in such a manner.

Separately, Legco president Leung sought to ease concerns over the display of the national flag in the main chamber in place of the city emblem.

Leung said it was part of preparatory work the legislature was undertaking for hosting the oath-taking ceremony following the election.

Rehearsals were under way, he added, although the legislature has yet to confirm the date of the ceremony with the chief executive, who will lead it.