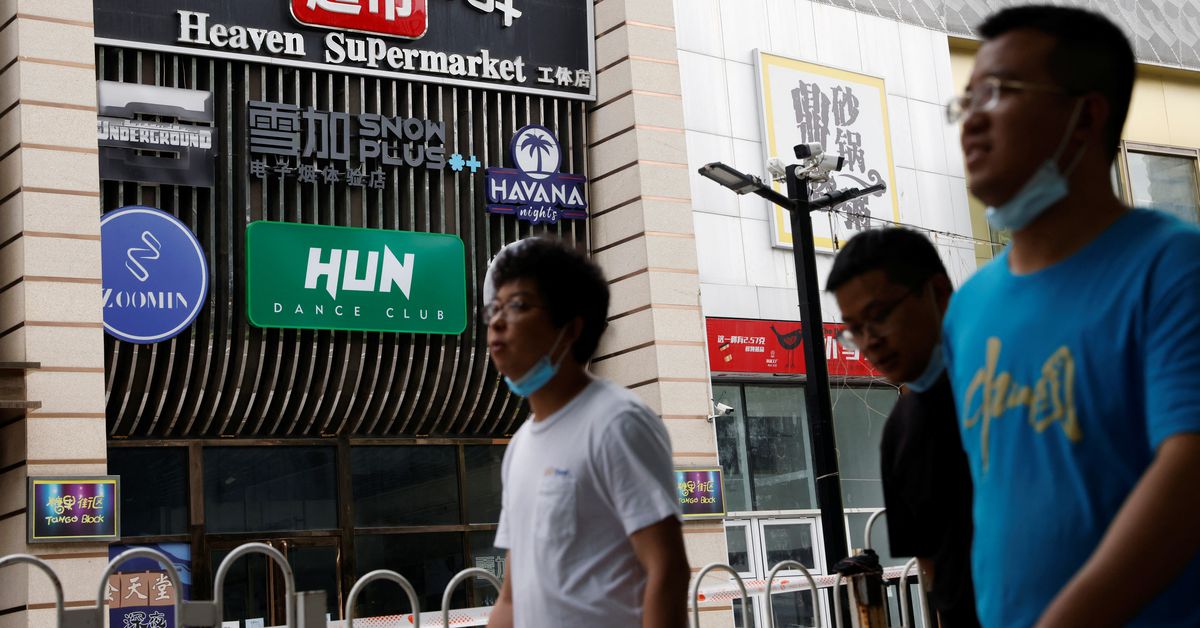 Beijing in 'race against time' to contain COVID surge

Authorities in China's capital warned on Tuesday that a COVID-19 surge in cases linked to a 24-hour bar was critical and the city of 22 million was in a "race against time" to get to grips with its most serious outbreak since the pandemic began.

Authorities announced on the weekend a "ferocious" COVID outbreak linked to the Heaven Supermarket Bar, which had only just re-opened after coronavirus curbs were eased last week.

The outbreak of at least 287 cases has raised new worries about the outlook for the world's second-largest economy. China is just recovering from a two-month lockdown in the city of Shanghai that had raised worries about global supply chains.

"We should go all out, race against time," He Lijian, spokesman for the Beijing municipal government, told a news conference, referring to efforts to contain the outbreak.

Drinking and dining in most establishments in Beijing only resumed on June 6, after more than a month of measures such as take-out meals only and working from home, along with the closure of malls and stretches of the transport system.

Authorities have refrained from restoring the toughest of the earlier restrictions, but about 10,000 close contacts of the customers of the bar have been identified and their residential buildings put under lockdown.

Chaoyang, the city's largest district in which the bar is located, began a three-day mass testing campaign on Monday for its roughly 3.5 million residents.

People infected in the latest surge in cases live or work in 14 of the capital's 16 districts, authorities have said.

Police have launched a criminal investigation into the person in charge of the bar on suspected interference with epidemic prevention, Pan Xuhong, deputy director of the city's Public Security Bureau, told the news conference.

Pan said three other people, two of whom had visited the bar and the other a close contact of bar customers, had been put under criminal investigation after they insisted on going out despite being ordered to isolate at home.

The three were later confirmed to have been infected, which resulted in dozens of people being put into quarantine at centralised facilities and more than 2,000 under other COVID measures, Pan said.

The bar's business license has been revoked after officials found it failed to comply with rules including checking customers' temperature and COVID test results, or making sure customers scan a digital health code, the market regulator in the Chaoyang district said on Tuesday.

Earlier in the day, the state-backed Beijing Daily said a team of officials would work to investigate and deal with the Heaven Supermarket Bar "quickly, strictly and seriously".

All of the city's bars, nightclubs, karaoke venues, internet cafes and other places of entertainment were being inspected, the newspaper said, with those in underground spaces being shut as epidemic prevention work is "tightened".

The paper has repeatedly pointed the finger at an individual, dubbed Patient No. 1,991, for triggering the flare-up. Careless behaviour had turned the unidentified person into the "propagator" of the outbreak.

Beijing authorities say the person did not take a COVID test between May 26 and June 8, despite visiting a number of restaurants, bars and crowded places at that time.

The patient developed a fever by the evening of June 8, two days after a visit to Heaven Supermarket Bar.

But despite the fever, the person returned to the bar early on June 9, the same day a handful of other bar patrons were found to be infected.