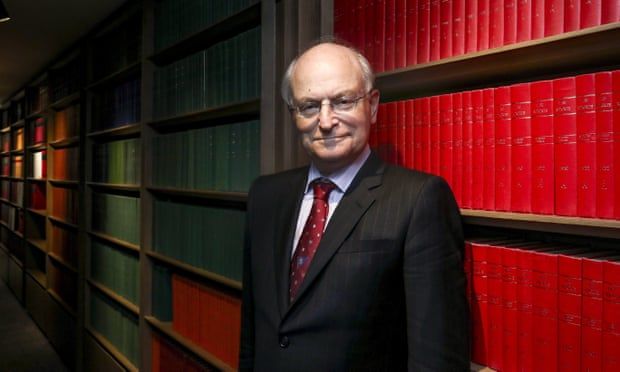 Authorities lambast British-born Paul Harris for criticising treatment of pro-democracy campaigners
Beijing and Hong Kong authorities have accused the British-born head of Hong Kong’s bar association of being an “anti-China politician” after he criticised jail sentences imposed on pro-democracy activists.

Paul Harris, a human rights lawyer and the chair of the HKBA, had represented one of 10 people convicted this month for organising or attending unauthorised assemblies during the pro-democracy protests in 2019. The defendants were given a range of suspended sentences or immediate jail terms of up to 18 months.

The media mogul Jimmy Lai and activist Lee Cheuk-yan were jailed, while Martin Lee, a barrister considered to be Hong Kong’s “father of democracy” was given a suspended sentence.

In a Cantonese-language interview last Wednesday with Stand News, Harris was quoted as saying the rulings were the first time jail sentences had been ordered “for an entirely peaceful unauthorised procession”.

“People have strong feelings and they need to find an outlet for those feelings. A peaceful demonstration is an outlet. If you don’t allow it, those feelings will not go away,” Harris also said, according to a translation by the Hong Kong Free Press.

The comments drew fire from the Chinese government’s highest representative body in the city, the liaison office, which called Harris “an anti-China politician with intimate foreign connections”, and suggested he should not remain chair of the bar association.

The response was widely reported in Chinese state media, and on Tuesday Hong Kong’s leader, Carrie Lam, appeared to back the liaison office and said her government could step in if necessary.

“For the time being I do not see the case for any government intervention into the affairs of the Hong Kong Bar Association,” Lam said. “But, of course, if there are instances or complaints about the bar not acting in accordance with the Hong Kong law, then of course the government would be called into action.”

Lam said Hong Kong – which is in the grip of a clampdown on civil and political freedoms – respected individual rights and freedom of speech and assembly “but this is not an absolute right”.

In its lengthy statement on Sunday, the liaison office accused Harris of having “spread distorted opinion, blatantly supported those who violated law, excusing those using violence, smearing law enforcement, and putting pressure on the judiciary” with his comments.

The office said continuing to have Harris as chair “made a mockery” of the association and warned it to not “walk farther down the road of politicisation. Otherwise, it will only step into an abyss it cannot get out of.”

It said this was not the first time Harris had spoken out of turn and he had “repeatedly ranted to amend the Hong Kong national security law, challenge the authority of the standing committee of the National People’s Congress, and oppose the rule of law and constitutional order in Hong Kong”. It also referenced his membership of the Liberal Democrats to question his loyalty.

Harris is a well-known human rights and public law specialist in Hong Kong, where he has lived and worked since 1994. He was born and raised in the UK, studying law and working for the Home Office and Foreign Office.

He was appointed chair of the HKBA in January. At the time, Harris said he wanted to explore appealing to the government to modify the national security law – a strict and sweeping law imposed by Beijing outlawing various dissenting acts as secession, subversion, foreign collusion or terrorism.

The remarks drew outrage from Beijing’s offices in Hong Kong as well as multiple arms of China’s state media. Harris was accused of being an “anti-communist lawyer” who had challenged state sovereignty, and the HKBA of being “hijacked by a majority of anti-China troublemakers”.

The association said in response that it was not a political organisation and both it and Harris supported the “one country, two systems” policy. “The HKBA, including its chairman, discharges its duties and attains its objectives with integrity and professionalism,” it said.

Harris declined to be interviewed, but told the Times in February he intended to stay as chair of the HKBA for one year, and to find issues to “unite” the majority of the bar, which was a reflection of Hong Kong’s “polarised” society.

“I hope to keep the bar respected, effective and pass it on to my successor in as good a state as found it,” he said.
Add Comment