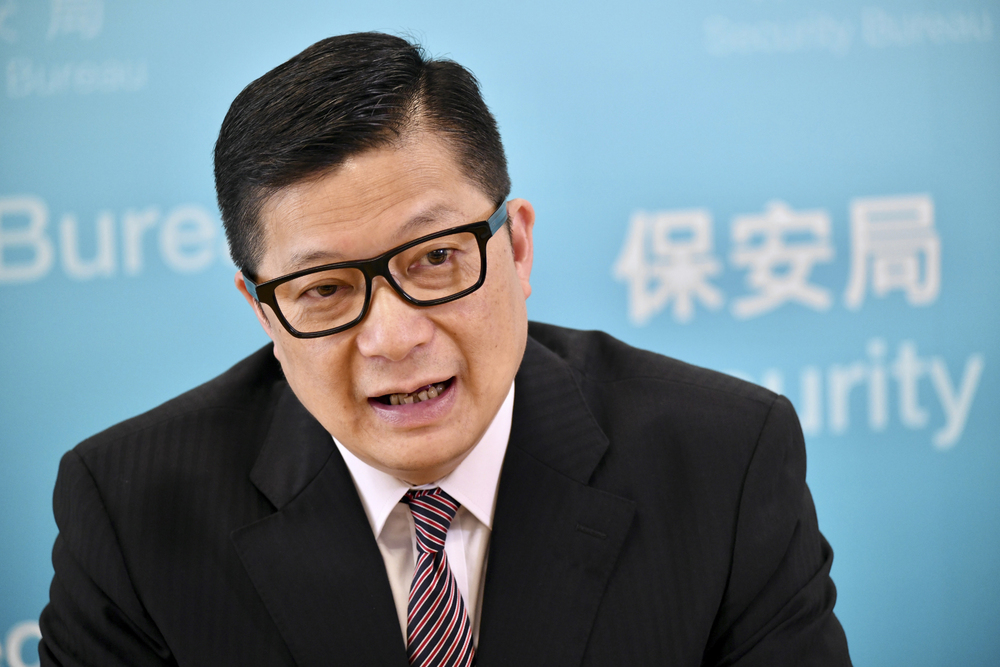 Basic Law Article 23 will target spying activities to plug loopholes following the anti-fugitive social unrest in 2019, Secretary for Security Chris Tang Ping-keung said.
Tang said in a television interview today that authorities are drafting the Basic Law Article 23 based on the version ditched in 2003 but the bill should be more comprehensive to cover grey areas.

He cited the example that good quality helmets and free MTR tickets were distributed free to protesters during the social unrest two years ago, showing there were state-level organizing behaviors.

Despite that the society has retored peace, the SAR cannot let its guard down and the government is considering to amend the Societies Ordinance, he added.

In a television interview today, Tang said the Article 23 of the Basic Law can regulate areas that have not been covered by the national security law, including the spy activities during social unrest.

“The organization of riots in Hong Kong in the past two years was state-level,” Tang said.

“For example, many materials and gears, including helmets that were even better than ours, were distributed [to protesters] for free in an organized way. Single journey tickets were also distributed to protesters at MTR stations. These [activities] were organized by state-level organizations,” he said.

Tang said the authorities are still studying how the bill should be implemented, including whether there will be designated judges for cases violating the bill and whether the police will have the same power as that granted by the national security law.

Tang also said the Article 23 drafted in 2003 is not sufficient enough to cover social unrest in recent years.

“Seventeen years have passed since 2003, and we need to draft a bill that is able to cope with what has happened in these two years,” Tang said.

“We are drafting the bill pragmatically, it would be irresponsible if we change nothing in the 2003 bill even if we found that it could not handle the current social situation in the recent two years,” he said.

He added that the bill and the current national security law will complement each other.

Asked if the police actions against pro-democracy groups will be suspended after disbandment of the groups in recent months, Tang said law enforcers have arrested and prosecuted “big tigers” endangering national security and the SAR has restored its stability.

But the authorities must not lower their guards against local territorism and the United States’ attempts to use Hong Kong as a tool to hinder China’s national development, Tang said.

He added that the government is considering the amendments of the Societies Ordinance which regulates organizations in the city.

“[The amendments may include] whether the ordinance will include more implementation details like the national security law, and whether it should require the groups to provide more information to the authorities like foreign laws,” Tang said.

The Hong Kong Alliance in Support of Patriotic Democratic Movements of China – organizer of the annual June 4 vigil – have announced to disband yesterday.

Tang said both Basic Law and national security law protect people’s freedom of assembly and expressing their views, but whether participating in June 4 vigil is illegal will depend on if attendees have subversion intentions.

“If you are just an ordinary citizen who attended some social event, I don’t see there is a problem in that,” he said.
Add Comment