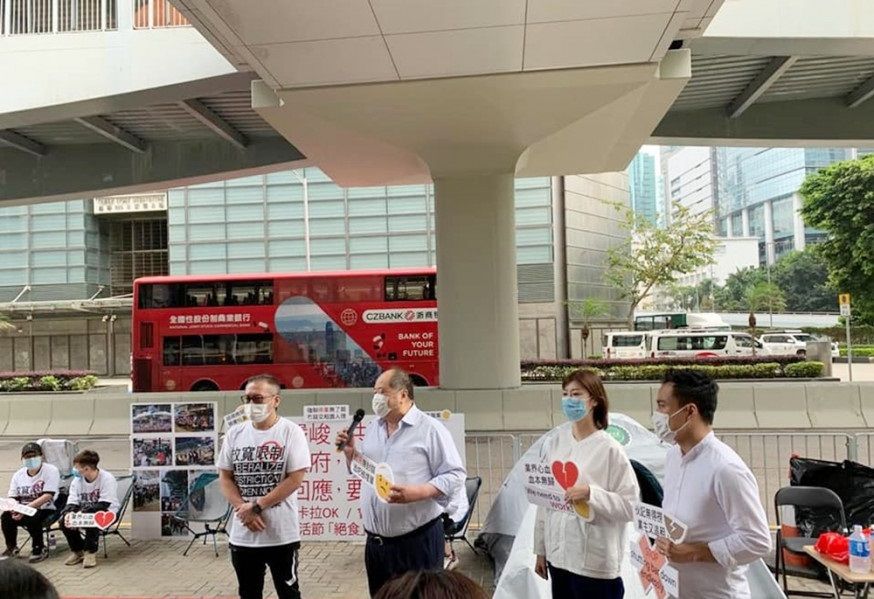 A group of bar, karaoke and mahjong parlour owners have gone on a symbolic hunger strike in Hong Kong over anti-coronavirus measures that have kept them shuttered for most of the last year.
The four-day protest started on the pavement outside the Hong Kong government's headquarters on Sunday - the one-year anniversary of when authorities first ordered a round of closures to stem infections.

Those taking part are refusing food in shifts, more an act of protest than a full hunger strike.

"People are queueing for beaches... restaurants are full but only we are in pain and barred from opening," Leung Lap-yan, founding president of the Licensed Bar and Club Association, said.

Hong Kong's bars - a major early source of infections - have been hit particularly hard by social distancing measures that have been tightened and relaxed depending on infection rates.

Over the last year, they have been fully closed for 230 days, opened with restrictions for 101 days, and allowed to run normally for only 24 days.

The latest closures have been in place since November, meaning bar owners missed out on the usually peak Christmas, New Year and Easter holiday seasons.

Densely populated Hong Kong was one of the first places to be hit by the coronavirus, but strict social distancing and universal mask wearing has helped keep infections to just over 11,000 with 205 deaths.

Those measures have caused economic devastation, however, and prompted accusations that authorities are more willing to relax curbs for politically connected industries.

Restaurants have remained open in recent weeks - with a cap on four people per table - while Hong Kong's malls and theme parks have been packed. Gyms have also been allowed to reopen despite being at the centre of a major recent cluster.

The protesting owners said their industries were willing to adopt stringent measures including capacity restrictions and even requiring customers to drink with a straw. But so far they have not won any government approval to reopen.

Yuen Kwok-yung, one of the city's top microbiologists, said on Monday that he understood people's anger.

"But if you want a full restoration of business, you must have 28 consecutive days with zero local cases," Yuen said. "Otherwise, once the restrictions are gone, it will come back."
#Coronavirus
Add Comment