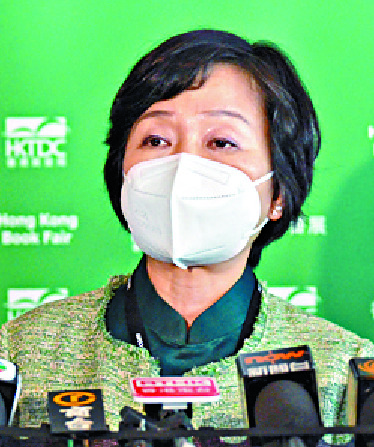 About 21,000 cross-boundary students can return to schools in Hong Kong as early as February 1, Secretary for Education Christine Choi Yuk-lin announced.
As the border between Hong Kong and the mainland reopened on January 8, Choi said yesterday that authorities have been discussing with their mainland counterparts to allow 21,000 cross-boundary students - 7,000 secondary, 13,000 primary and 900 kindergarten pupils - to commute to schools in the SAR for in-person classes after the Lunar New Year holiday.

However, about a quarter of these students have already been living in Hong Kong during the pandemic, Choi said.

It comes as the Education Bureau earlier announced the resumption of whole-day in-person classes progressively from next month regardless of students' vaccination rates.

"We have yet to discuss the control point for the students," she added.

"We are also thinking of allowing these students to register their personal information in advance so that during the peak hour when they go to school they can complete the immigration clearance quickly by scanning a code, or there will be a [immigration] channel designated to them."

Choi said she was "optimistic" of allowing the students to take daily rapid Covid tests instead of PCR tests as, currently, travelers entering from the mainland have to provide a negative PCR test within 48 hours prior to their departure.

The Education Bureau informed schools that, in order to lower the transmission risk, the daily rapid Covid test for students will remain until February 28.

Choi said the mainland study tour for secondary four to six students of the Citizenship and Social Development subject could start in April, while the short-term tours for Guangdong province, or one-day trips, will first be initiated for secondary five students.
#Covid
Add Comment