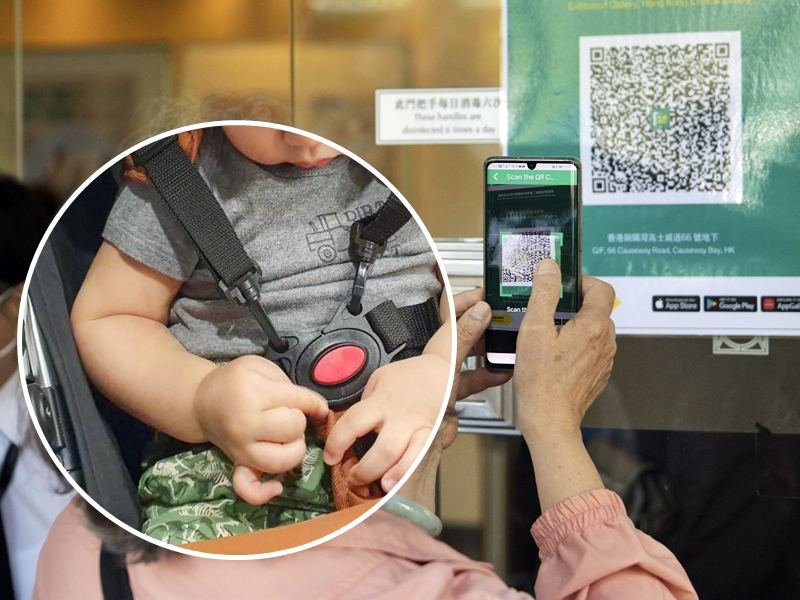 Baby "not qualified” to be exempted from using LeaveHomeSafe app, barred from entering sport center

A two-year-old baby in a stroller was banned from entering a sport center as the mother failed to provide identification to prove the baby is under 12 and can be exempted from the LeaveHomeSafe mandate.
A mother recently shared her experience on Facebook which soon went viral online.

The mother took her two-year-old baby in a stroller to a playing zone in Ma On Shan Sports Centre on Wednesday morning.

However, the staffers there requested the mother to provide identification documents to prove the baby is under the age of 12 and can therefore be exempted from using the LeaveHomeSafe app to scan the QR code.

Citizens must use the LeaveHomeSafe app to scan the venues' QR code when entering all government premises starting this month, which the government said a necessary measure for Covid-tracing.

Only certain groups of people including youngsters aged under 12 or elderly aged 65 or above can be exempted from using the app. Instead, they will have to register their information on a paper form.

The mother said in the end that her baby was banned from entering the sport center, as she did not have any document on her, and she did not wish to start an argument while carrying a baby.

She added she will not visit the sport center anymore and hoped her experience could serve as a reminder for other families so that parents can avoid disappointing their children.

The Leisure and Cultural Services Department confirmed the incident. It has reminded staffers that they can grant exemption to children aged under 12 even if they fail to provide relevant identification documents in similar cases, a spokesman said.

Many netizens slammed the staff members for being unreasonable and shared similar experiences they have encountered.

A parent commented, “I was asked to provide the birth certificate for my baby boy when I was carrying him on my back.”

As her kindergartner daughter does not have a phone, she ended up walking back to the front door and registering information for her daughter.
#Facebook  #Covid
Add Comment