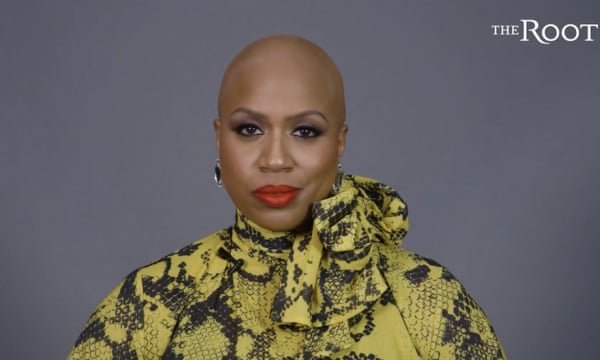 The US congresswoman Ayanna Pressley unveiled a bold new look on Thursday.

The 45-year freshman representative from Massachusetts is completely bald, a condition she revealed is caused by alopecia.

The member of the four-strong, so-called “Squad” of progressive Democratic party newcomers to Congress disclosed her diagnosis in an exclusive video with the Root.

In the video, Pressley begins by telling the story of her hair journey, going from typically pressed or bunned hair to more Afrocentric styles, most notably her Senegalese twists.

Predicting this would be “filtered and interpreted by some as a political statement that was militant”, she instead received letters of support from women and girls across the country, she said.

“Little girls were wearing T-shirts that said ‘My congresswoman wears braids,” she reveals in the video. “We received letters from all over the globe from women who talk about their own emancipation, that they felt I’ve given them permission.”

But then Pressley was increasingly spotted donning lace-front wigs. That’s because during a routine hair appointment to have her hair re-twisted, she noticed her hair was thinning. Soon after, it had completely fallen out.

“It’s accelerated very quickly. I had been waking up every morning to sinks full of hair,” Pressley said. “Every night I was employing all the tools that I had been schooled and trained in throughout my life as a black woman. I wrapped my hair, I wore a bonnet, I slept on a silk pillowcase.”

Alopecia is the medical term for baldness, and according to the National Alopecia Areata Foundation, is a “common autoimmune skin disease, causing hair loss on the scalp, face and sometimes on other areas of the body. The condition affects as many as 6.8 million people in the US with a lifetime risk of 2%.”

Pressley said she has concealed her hair loss for much of her first term in Congress.

She lost the final strands the night before Congress voted to impeach Donald Trump in December, she said.

Coincidentally, it was the same night as the anniversary of her mother’s death – and not long after the death of her mentor, the Maryland congressman Elijah Cummings, who died in October from complications from a long-term medical condition.

Deciding to go public, in the video Pressley goes from a wig to her bald head for the first time. Thinking of the T-shirts, she felt she “owed all those little girls an explanation”. Despite others insisting she didn’t, as a black woman she says she understands everything about her is seen as political.

“I think [many] might over-intellectualize it and say ‘it’s just hair’,” she says. “People who are well-meaning have reminded me of the India.Arie song, I Am Not My Hair. And that’s true, but I still want it. So I’m trying to find my way here and I do believe going public will help.”

Many on Twitter, including fellow Squad members, voiced their support, calling her a role model for others experiencing hair loss.

Your courage in sharing your story is what makes you so incredibly special @AyannaPressley.

I love you sis. https://t.co/0OtFXsrXlK

.@RepPressley reveals her private struggle with alopecia - with a powerful message about black women’s hair, what it represents, and how it serves as both an object of criticism and a symbol of empowerment. https://t.co/1q5YBdN15D

According to a July study from the Journal of the American Academy of Dermatology, African Americans experience alopecia areata at a higher rate than other racial groups, particularly traction alopecia – which can happen when hair is pulled at the roots for over long periods of time.