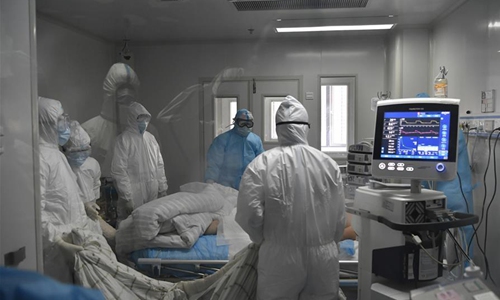 Autopsies show severe damage to COVID-19 patients' lungs and immune system, according to a doctor in Wuhan reached by the Global Times, who called for measures to prevent fibrosis of the lungs at an early stage of the disease.
"The influence of COVID-19 on the human body is like a combination of SARS and AIDS as it damages both the lungs and immune systems," Peng Zhiyong, director of the intensive care unit of the Zhongnan Hospital of Wuhan University in Wuhan, told the Global Times on Friday.

Peng said he had just talked to Liu Liang, a forensic specialist from the Tongji Medical College at Huazhong University of Science and Technology. Liu's team has reportedly conducted nine autopsies on deceased COVID-19 patients as of February 24.

"The autopsy results Liu shared inspired me a lot. Based on the results, I think the most important thing now is to take measures at an early stage of the disease to protect patients' lungs from irreversible fibrosis," Peng noted.

If irreversible damage is done, other measures, like those to prevent patients from oxygen deficit, will not be of much use, he said.

Liu's team published a paper on an autopsy they conducted in the Journal of Forensic Medicine on Tuesday.

The paper said there was apparent damage to the patient's lungs. An excess production of mucus spilled out of the alveoli, indicating COVID-19 causes an inflammation response that damages deep airways and pulmonary alveoli.

The patient, an 85-year-old man, exhibited similar pathological changes to those caused by SARS and MERS. Fibrosis in his lungs was not as serious as was seen in SARS patients, but an exudative reaction was more apparent, possibly due to the short course of his disease.

News about the paper went viral on Chinese social media platforms on Friday.

Some news reports said that Liu's team's autopsies showed that sputum bolt is one the main reasons that caused COVID-19 patients' deaths. Some medical staff have used sputum aspirators for patients based on the results, which led to a decline by half in the number of deaths in Wuhan on Wednesday.

However, Peng doubted the reports, saying that he believes the decline was due to the improving situation and shrinking patients pool.

"Even if the autopsy results are helpful, the effectiveness would not come out so quickly. It takes at least one week to observe," Peng said.

He warned that the number of deaths may rebound as he knows many critical patients in Wuhan have held out for one month but are still in danger and could die anytime.

There were 6,775 critical patients in Wuhan as of Thursday and the number of deaths Wuhan authority reported on Thursday was 28, according to NHC.

The patient mentioned in the paper was hospitalized in January for a cerebral infraction, the death of tissue in the brain resulting from inadequate blood supply. He was confirmed to be infected with novel coronavirus 13 days later and died after a further 15 days. The autopsy was conducted within 12 hours of his death.

No apparent pathological changes were found in his digestive system, spleen or brain, the report said.

Liu's team conducted the first on February 16, about a month after the outbreak.

Liu previously told media that he and his team had proposed to the Wuhan government to conduct autopsies soon after the outbreak.

The government and local hospitals agreed on the necessity of autopsies but could not provide proper locations. They also worried about risks of viral transmission during such autopsies.

Yang Zhanqiu, deputy director of the pathogen biology department at Wuhan University, explained that preparation and risk evaluation of the autopsy of COVID-19 patients is crucial, as it may cause containment of the hospital or medical members.