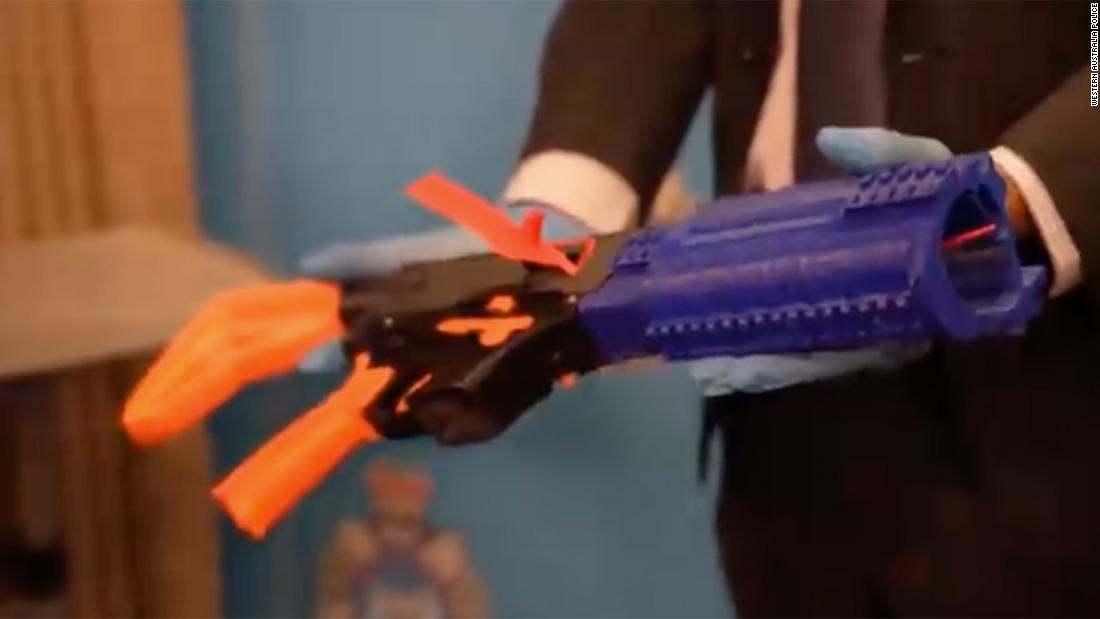 An Australian teenager has been charged with gun offenses after police seized a fully functioning firearm he allegedly made at home with a 3D printer.
Police in Western Australia found the weapon and a number of other firearms after executing a search warrant at the 18-year-old man's home in early June.

"This firearm although it resembles a toy has the ability to cause serious harm within our community," Detective Senior Sgt. Blair Smith told reporters. "It's deeply concerning that this man was able to manufacture this firearm at home with a 3D printer and readily available materials."

The plastic weapon is capable of firing 15 rounds with one pull of the trigger, according to CNN affiliate Nine News. Police allege it took two days to make with materials costing less than 40 Australian dollars ($28), Nine reported.

Last year, the Western Australia government proposed changing gun laws to make it illegal to manufacture plastic 3D firearms. Under the proposal, a maximum 10-year sentence would apply to anyone caught with plans or instructions on how to make them.

In Australia, civilians are banned from possessing fully automatic weapons, and all other gun ownership is heavily regulated and restricted to people over 18 with a valid license. The laws were introduced in 1996 after a gunman opened fire on tourists at Port Arthur, a former colonial prison in Tasmania, killing 35 people.

The massacre horrified the Australian public and the government quickly tightened rules on firearm ownership. A gun amnesty was launched, which encouraged people to hand in guns at local police stations anonymously and without penalty. Combined with a gun buyback scheme, the measure took about 640,000 guns out of circulation.

Since then, short-term amnesties have been announced -- around 57,000 guns were surrendered in just three months during the last national amnesty in 2017, according to the government. Last July, the national gun amnesty became a permanent feature.

The teenager in Western Australia has been charged with offenses including the unlicensed manufacture of firearms and ammunition, and possession of a prohibited weapon.

He's due to appear in court next week.

Australia is often held up as example of how decisive action gun control can succeed in reducing deaths from firearms. The last mass shooting in Australia was in 2018 when seven people were killed at a property in Perth, Western Australia. It was the worst mass killing in the country for 22 years.