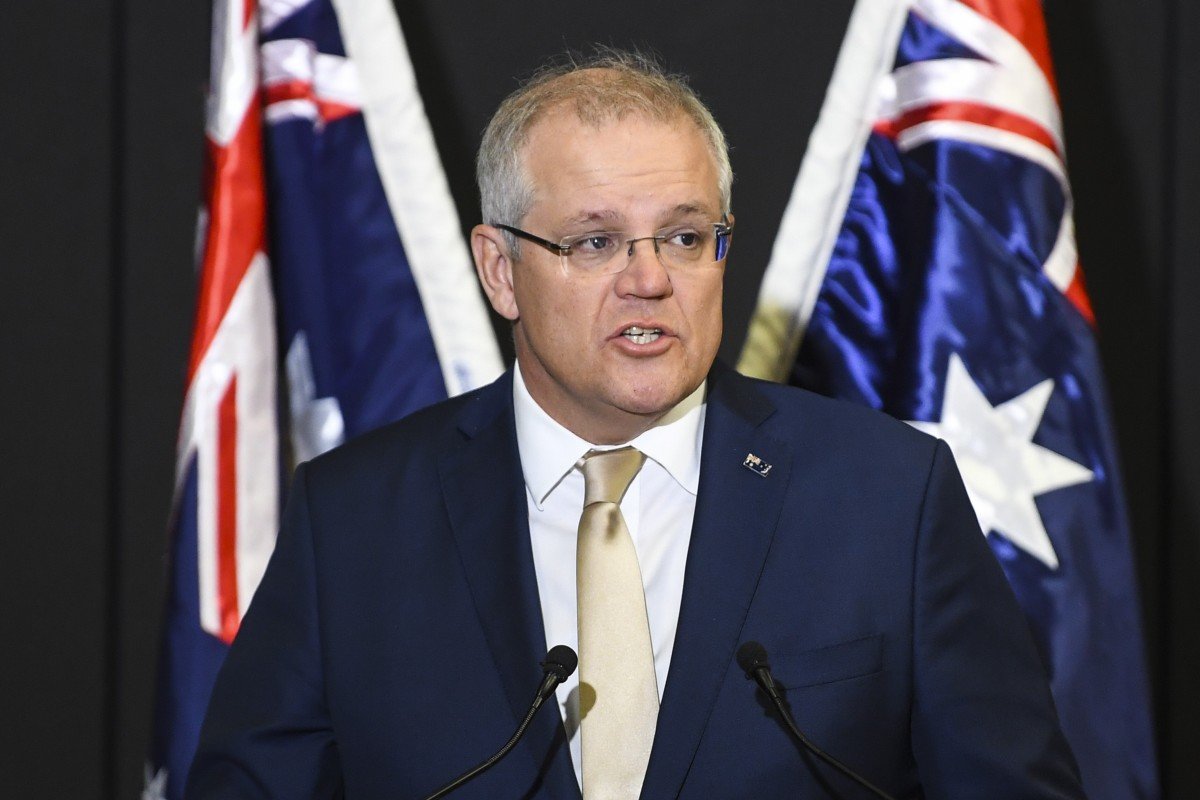 Australia will also suspend extradition treaty and allow 10,000 Hongkongers on student and other temporary visas to stay following passage of national security law. New Zealand is also reviewing its ties with Hong Kong.
Australia will suspend its extradition treaty with Hong Kong and give 10,000 Hongkongers on student and temporary visas a pathway to permanent residency in response to the city’s controversial national security law, a move that drew a swift rebuke from Beijing.

Prime Minister Scott Morrison on Thursday said the national security law constituted “a fundamental change of circumstances in respect to our extradition agreement with Hong Kong” and Australia had “formally notified Hong Kong and advised the Chinese authorities” of the decision.

In response, China slammed Australia’s move as a serious violation of international law.

“It grossly interferes in China’s internal affairs. China will not accept it, and expresses strong condemnation. China reserves the right to take action, and Australia will have to bear all consequences because of that,” said Chinese Foreign Ministry spokesman Zhao Lijian at a regular press briefing in Beijing on Thursday.

Earlier, a spokesman at China’s embassy in Canberra issued a statement saying Australia’s “meddling in Hong Kong’s affairs and China’s internal affairs ... will lead to nothing but lifting a rock only to hit its own feet”.

Meanwhile, New Zealand on Thursday said it was reviewing settings of its relationship with Hong Kong, which would include extradition arrangements, controls on exports of strategic goods and travel advice. “China’s decision to pass a new national security law for Hong Kong has fundamentally changed the environment for international engagement there,” Foreign Minister Winston Peters said in a statement.

Apart from allowing Hongkongers on graduate and temporary skilled work visas to stay in the country for five years, up from two years, Australia will offer incentives for Hong Kong businesses to relocate. While Australia did not announce plans to issue visas on humanitarian grounds to Hong Kong residents, Morrison said they could apply to the country’s humanitarian and refugee visa programme.

He added that the government would give special consideration to Hongkongers eligible for the Global Talent Visa scheme, making a pitch for international financial services, consulting and media businesses with regional headquarters in Hong Kong to relocate to Australia.

“There is so much talent in Hong Kong,” said Acting Immigration Minister Alan Tudge. “There are great businesses in Hong Kong. And we know that many individuals now might be looking elsewhere, because they do want to be in a freer country, they want to be in a democratic country.”

The move is Australia’s most significant immigration offer related to human rights concerns about China since former prime minister Bob Hawke’s decision to allow 42,000 Chinese students to stay in the country following the Tiananmen Square crackdown in 1989.

“There will be citizens of Hong Kong who may be looking to move elsewhere, to start a new life somewhere else, to take their skills, their businesses and things that they have been running under the previous set of rules and arrangements in Hong Kong, and seek that opportunity elsewhere,” Morrison told reporters in Canberra.

“Australia has always been a very welcoming country to such people from all around the world.”

The 2016 census recorded nearly 87,000 Hong Kong-born people in Australia. Hong Kong was Australia’s 12th-largest trading partner in 2018, with two-way trade valued at A$17.8 billion (US$9.8 billion). The Australian Chamber of Commerce in Hong Kong declined to comment.

The announcement came just minutes after Canberra updated its travel advice for the city to warn its 100,000 citizens in the city that they “may be at increased risk of detention on vaguely defined national security grounds”.

Critics say the national security law drastically curtails the rights and freedoms guaranteed under the “one country, two systems” framework governing Hong Kong but Beijing has maintained it is necessary to restore order to the city after last year’s anti-government protests.

Chengxin Pan, a professor of international relations at Deakin University, said Canberra’s “political gesture” was bound to exacerbate tensions, that have already been strained by disputes encompassing trade, allegations of espionage, racist incidents targeting Asians in Australia, and the South China Sea.

“You may call it part of ‘virtue signalling diplomacy’ on Australia’s part, which could at once help to reaffirm Australia’s self-image as a middle power standing up for human rights and liberal democratic values, and to double down on its ongoing diplomatic spat with China,” he said.

On Wednesday, the Chinese nationalist Global Times tabloid warned in an editorial that “political provocations over the Hong Kong issue” would end up being a “bitter pill” for Australia’s economy.

Australia-Hong Kong Link, a concern group supporting the protest movement in Hong Kong, welcomed Canberra’ s decision but asked for a “Magnitsky Act” that would impose sanctions on those involved in enforcing the national security law, on the grounds that it violated human rights.

Wong Mei-mi, 33, a Hongkonger who used to work as a welfare services officer before moving to Melbourne to study for an undergraduate degree, said she had taken part in pro-Hong Kong protests there and was worried about returning to her home city.

“I don’t know if my photos or information have been sent back to the Hong Kong authorities. I am afraid I would be arrested once I return to Hong Kong,” she said.

Crystal Auyeung, 25, who is training to be a dietitian in Brisbane, said she would seek permanent residency in Australia, even though she had originally wanted to remain just for two years to gain working experience before returning to Hong Kong.
The law, she said, was so broad that “I don’t know if I would step into legal minefields”.

But Auyeung expressed concern about a possible backlash against Hongkongers who took up Canberra’s offer of residency.
“Actually in Brisbane there’s not much need for imported labour. I am afraid local people may think that Hongkongers are coming to compete with them,” she said.

COSTS AND BENEFITS
Australia’s economy, which this year entered its first recession for 30 years due to the effects of the coronavirus pandemic, has long been sustained by steady immigration. In 2016, just under half of all Australians were either born overseas or had a parent who was.

However, the economic impact of the pandemic has led to an expected downturn in arrivals – as much as 85 per cent this financial year.

Jocelyn Chey, a visiting professor at the University of Sydney, said although Australia had strong links to Hong Kong and a large Hong Kong expat community, she expected initial uptake of the residency offer to be modest.

“Australia is going through a difficult time because of the pandemic and its effect on the economy,” Chey said. “Hongkongers know this and also know the relative costs and opportunity limitations of moving here. I would expect China and the East Asian region to recover from the current downturn before the rest of the world and I think many Hongkongers would share this view.”

Pan said it was also possible Hongkongers could face prejudice in Australia, reflected by a series of racist attacks on Asians since the start of the pandemic.

“If there was a large number of migrants from Hong Kong over a short period, it could spark some backlash among locals,” Pan said.

“It might be possible, for example, that some Hongkongers could be blamed for certain social economic woes in Australia – such as driving up house prices – in a post-Covid-19 period. But they’re most likely to be lumped together with other Chinese and Asian people amid rising anti-Chinese and Asian sentiment, rather than being singled out as Hongkongers.”
#COVID-19  #Covid  #Coronavirus
Add Comment