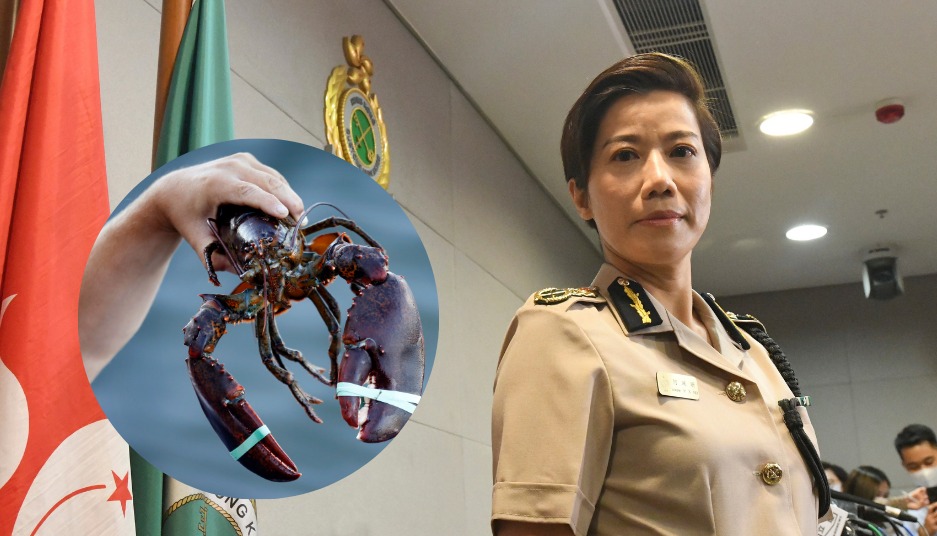 Rampant smuggling of Australian rock lobsters into mainland China is a national security threat, Hong Kong's new customs chief said on Thursday as she vowed to crack down on the trade.
Lobsters are one of a number of products from Australia that China has restricted imports of, as relations between the countries plunged. But they remain a prized and much sought-after delicacy in mainland China.

Imports of Australian rock lobsters to Hong Kong -- which maintains no restrictions on the crustaceans -- have since sky-rocketed, with suspicions that the vast majority end up on mainland tables.

Louise Ho Pui-shan, 53, explained why lobsters were one of her priorities when it comes to safeguarding China's national security during her inaugural press conference.

She was announced as the city's new customs commissioner on Thursday, the first woman to hold the position. The wife of Secretary for Constitutional and Mainland Affairs Erick Tsang Kwok-wai, Ho is the second internally-promoted customs chief following her predecessor, Hermes Tang Yi-hoi.

"On the surface, it is a simple matter of smuggling lobsters, but these activities undermine our country's trade restrictions against Australia," Ho told reporters.

"Stopping lobster smuggling is a very important part of protecting national security, so we will pursue it diligently."

Ho said the national security law has been highly effective as the number of guns, ammunition and helmets seized at the border has dropped since the introduction of the law. But there are still dangers as people use “soft means” to promote messages jeopardizing national security, such as putting up posters.

Smuggling goods by speedboat has been a mainstay of the organized crime gangs operating on both sides of the border for years, but the phenomenon has surged during the coronavirus pandemic.

Police embarked on a crackdown after a marine officer was killed last month when her vessel was rammed by smugglers during a high-speed chase.

Lobsters are just one of a cornucopia of in-demand goods that gangs smuggle into China. Recent speedboat smuggling busts have netted everything from luxury watches, handbags and shoes to endangered animal parts, cosmetics, wines, whiskey and cigars.

In June, Bloomberg reported that Hong Kong has become the world's largest importer of Australian lobsters, with monthly trade growing more than 2,000 percent from October to April.

Ho also said that customs officials will actively block the inflow of anti-government propaganda at the border, even if the content looked innocuous.
#Coronavirus
Add Comment