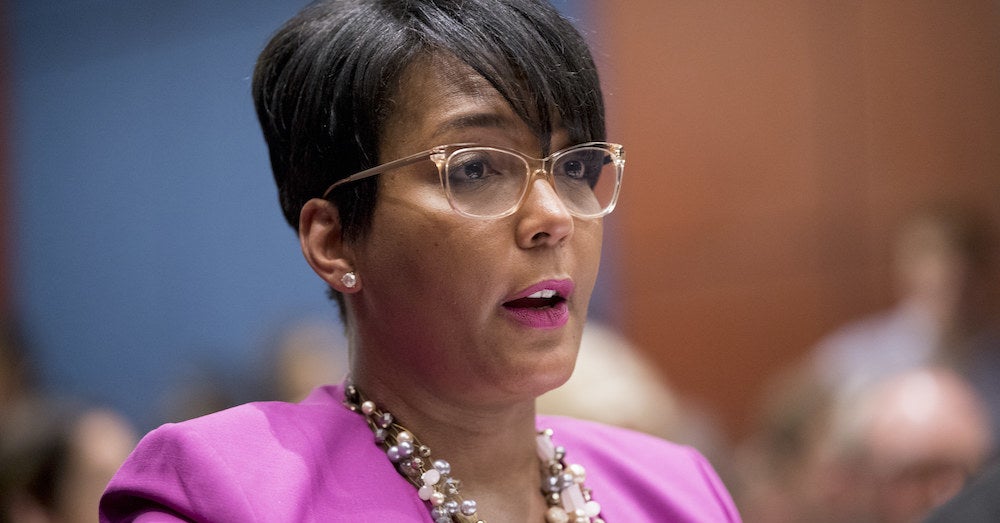 Bottoms, who has gained national attention for her response to police killings, is in serious contention to be Joe Biden's running mate.

Atlanta Mayor Keisha Lance Bottoms announced Monday she has tested positive for COVID-19, the disease caused by the novel coronavirus, as Georgia fights an uptick in cases of the virus.

Bottoms, who is seen as a top contender to be Joe Biden's running mate on the Democratic presidential ticket, tweeted that she had no symptoms when she tested positive.

COVID-19 has literally hit home. I have had NO symptoms and have tested positive.

Bottoms told MSNBC's Joy Reid that her husband also tested positive for COVID-19, despite the fact that they had been taken precautions and both tested negative two weeks ago.

"It leaves me for a loss of words because I think it really speaks to how contagious this virus is," Bottoms told MSNBC. "And we've taken all of the precautions that you can possibly take. We wear a mask. We're very thoughtful about washing our hands. I have no idea when and where we were exposed."

She said her husband's fatigue and her own slight cough and seasonal allergies were the only indications that they should both get tested again.

"This is just a lesson for everyone that you have to take every single symptom seriously," Bottoms said on MSNBC.

The mayor spoke at a press conference Sunday, following the shooting death of 8-year-old Secoriea Turner in Atlanta on Saturday, where she pleaded for an end to gun violence. Bottoms told MSNBC that she had reached out to Turner's parents to let them know of her diagnosis, and said she would be quarantining at home for the next two weeks.

"You shot and killed a baby": Atlanta Mayor Keisha Lance Bottoms demands an end to violence after the killing of 8-year-old Secoriea Turner over the weekend https://t.co/hWIeq7mPVF pic.twitter.com/DoZ9Hm68o2

The mayor gained national attention as protests rocked Atlanta in May and June following the police killings of George Floyd, Breonna Taylor, and Rayshard Brooks, who was killed in Atlanta. In response to Brooks's death, Bottoms announced that Atlanta Police Chief Erika Shields would be stepping down, and she called for the officers involved to be fired.

Georgia has reported more than 95,000 coronavirus cases and 2,860 deaths related to COVID-19, according to the CDC. The state set a record for new cases on July 2, WXIA-TV in Atlanta reported. In the past two weeks, cases increased by an average of 2,201 new cases per day, according to the station.

Georgia was widely criticized for being among the first states to reopen in late April after the initial coronavirus lockdown. Georgia businesses have remained open, and Gov. Brian Kemp has not mandated masks in public, despite a recent letter from 1,400 state healthcare workers asking him to do so.