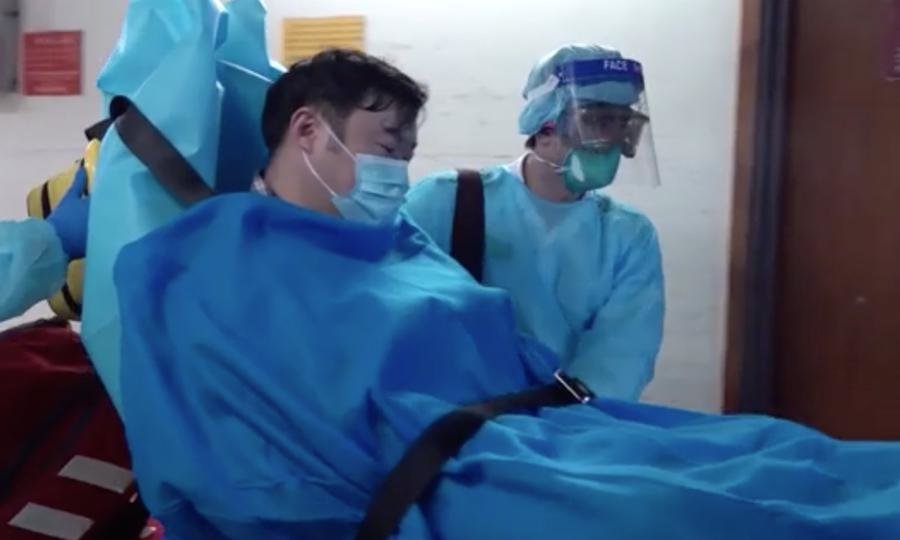 The patient’s relatives, who were traveling with him, boarded a flight for Manila before he was diagnosed
A 39-year-old mainland Chinese man who was intercepted at a customs checkpoint in Hong Kong on Tuesday because he had a fever has tested positive for the Wuhan virus. It is the first confirmed case in Hong Kong.

At 1:30 pm on Tuesday, the man and four of his family members, who live in Wuhan, took the Express Rail Link (train number G1015, seat 10D in coach 3) from Wuhan to Shenzhen North. Last night, he took another high-speed train (number of G5607, seat 2D in coach 2) and arrived at Hong Kong’s West Kowloon station at 7:74 pm.

After his arrival, he was sent to Queen Elizabeth Hospital. He had a fever and an infection in his upper respiratory tract. He tested negative for influenza but positive for the Wuhan virus. He was then sent to Princess Margaret Hospital to be quarantined.

The man said he was living in Wuhan but did not visit any wet markets or medical facilities. He added that he did not have contact with any wild animals or infected patients. However, sources told Hong Kong media that the man’s home was close to a wet market.

According to the Health Department of Hong Kong, the man’s relatives stayed overnight at the Empire Hotel in Tsim Sha Tsui and departed for Manila on Cebu Pacific Air flight 5J111 at 11:21 am on Wednesday.

Sophia Chan Siu-chee, secretary for food and health, said the case would be considered “highly suspect” until a complete DNA test can be completed on Thursday.

Commenting on why the man’s family members were allowed to leave Hong Kong, Chan said the man’s test results came after his family members, who did not exhibit any symptoms, departed for Manila.

Some observers have criticized Hong Kong’s anti-epidemic measures, saying they were implemented too late, but Chan pointed out that the fever check at the customs checkpoint had successfully identified the case.

The Health Department set up a hotline (852) 2125 2122 for passengers who were on the same train as the infected man, and would determine whether they need to be quarantined.

Chan Hon-yee, the director of the Department of Health, said Wednesday that passengers who sat near the infected man would be be sent to recreation camps.

Meanwhile, another person tested positive for the Wuhan virus at Prince of Wales Hospital on Wednesday, RTHK reported, citing unnamed sources. The person was transferred to Princess Margaret Hospital for quarantine.
Add Comment