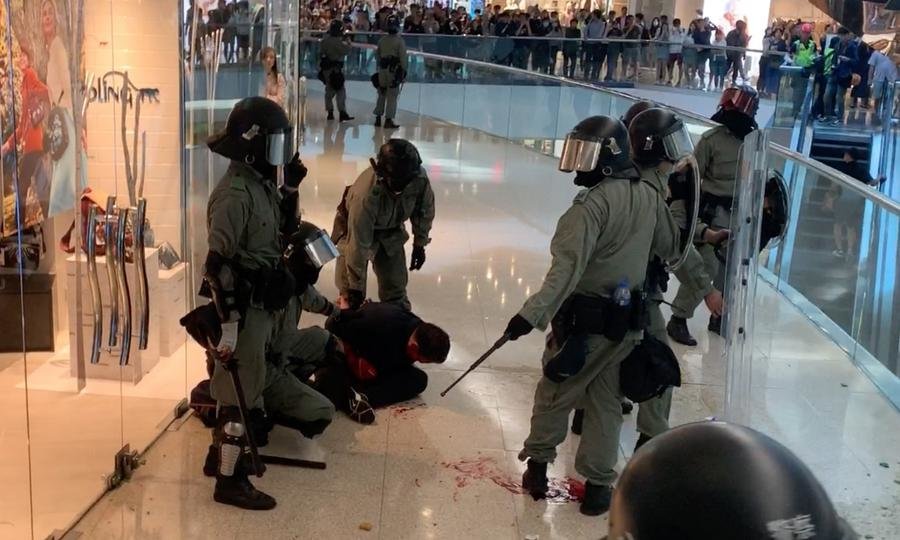 The watchdog was not fit for the purpose ‘in a society that values freedoms and rights,’ experts said

Members of the Independent Expert Panel of the Independent Police Complaints Council (IPCC) – hired to advise Hong Kong on the police response to huge pro-democracy protests – announced Wednesday they were quitting, saying the watchdog was not fit for the purpose “in a society that values freedoms and rights.”

“As a result, the IEP (Independent Expert Panel) has taken the decision to formally stand aside from its role,” the experts said in a statement obtained by local media outlet RTHK.

“We ultimately concluded that a crucial shortfall was evident in the powers, capacity and independent investigative capability of IPCC.”

The experts said they would remain committed to engaging with the IPCC, “if and when it develops the necessary capabilities and provides its draft interim report on the protests.”

“IPCC has taken note that we do not have investigation powers under the current setting, hence support from the Chief Executive and the Commissioner of Police have been solicited for the Thematic Study,” said IPCC chairman Anthony Neoh.

Neoh said the IPCC had to progress this initiative within the present IPCC Ordinance with a view to offering improvements in recommendations to the police and assist in the examination of related complaint cases.

He added that any change to the current IPCCO set-up would require consensus from the community and stakeholders and would be pursued in accordance with statutory procedures.

In a statement, the IPCC said Wednesday that the scope of the study would include incidents occurring on July 21, August 11 and August 31, including the handling procedures for arrested persons at the San Uk Ling Holding Centre on August 11.

However, the first interim report would focus on incidents occurring on June 6, June 12 and July 1.

It said the IPCC deeply appreciated the participation and contribution of the IEP members and it was pleased that IEP members’ desired to remain engaged.

The establishment of an independent commission of inquiry to look into alleged police brutality has been one of the five demands raised by Hong Kong protesters since rallies started in early June.

Chief Executive Carrie Lam repeatedly rejected the protesters’ demands, but said the government would consider it if the public was not satisfied with the interim report published by the IPCC at the end of this year.

The experts’ departure will further raise doubts about the credibility of the IPCC’s interim report into Hong Kong’s unrest, said Tanya Chan, the convenor of the pan-democratic camp.

“This is a very crucial act and you can see that this is a vote of no confidence to this report,” Chan said. “It would definitely affect the effect or the standard of this upcoming interim report.”

Priscilla Leung Mei-fun, a pro-Beijing lawmaker from the Democratic Alliance for the Betterment and Progress of Hong Kong, said if the overseas experts felt they did not have enough power to look into the cases, they should have raised the matter earlier.

The panel of five overseas experts, appointed to advise Hong Kong’s police watchdog’s study about the force’s handling of the huge pro-democracy protests, issued a statement a month ago, saying they felt the IPCC was not equipped to carry out a proper investigation.

On November 9, Clifford Stott of Keele University, one of the overseas experts, tweeted a Position Statement Report of Progress that the IEP suggested a fully independent inquiry into the policing of protests in Hong Kong.

The government also faced another setback, apart from the departure of the IEP members, when the Court of Appeal on Tuesday refused to suspend a lower court’s ruling that the city’s mask ban law was unconstitutional.

The government claimed that by declaring the anti-mask law invalid, the High Court had sent the wrong message to the public, encouraging them to wear masks at protests and emboldening them to commit acts of violence. Its claim was dismissed by the Justices at the Court of Appeal.

An appeal hearing on the anti-mask law will take place on January 9 and 10.

On October 4, the government invoked emergency laws to launch the anti-mask law. On November 18, the High Court ruled that the mask ban was excessive and the new law was unconstitutional because the restrictions it imposed on people’s fundamental rights were more than what was necessary.

The anti-mask law had remained effective until Tuesday as the High Court gave an “interim suspension” to allow the administration time to ask the Court of Appeal for a different decision.

While Hong Kong protesters applauded the court’s ruling that the anti-mask law was unconstitutional, they were confused after some masked people set fire to the gates of the High Court in Admiralty and the Court of Final Appeal in Central during the large-scale march on Sunday.

At about 6pm, two black-shirted people were seen throwing a dozen petrol bombs at the front gate of the High Court. They left after two minutes, a witness surnamed Lee told the Apple Daily.

At 7pm, two black-shirted people were seen throwing three to four firebombs at the gate of the Court of Final Appeal facing Statue Square, according to a Ming Pao report. A dozen protesters then came to put out the fire with water and asked people not to set fire to the court.

Figo Chan Ho-wun, the vice-convener of the Civil Human Rights Front, said the High Court was not near the route of Sunday’s march and the identity of the people who set the fire was unclear. He urged the police to investigate it.

Jimmy Sham Tsz-kit, the convenor of the Civil Human Rights Front, said there was a consensus among protesters that courts should be protected as they are important institutions to safeguard Hong Kong’s human rights and rule of law, particularly the recent ruling that the anti-mask law was “unconstitutional.” Sham said he believed the attackers were not protesters.

Before the police could arrest the suspects in the two arson cases, some pro-Beijing newspapers had already blamed the anti-government protesters for the attacks.