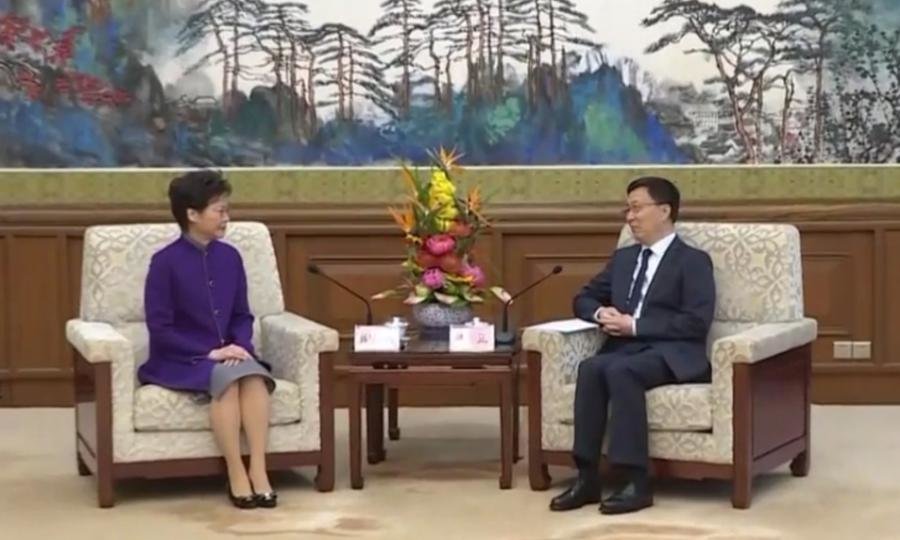 A pro-China politician in Hong Kong was stabbed and wounded while campaigning in his constituency.

While Chinese Vice-Premier Han Zheng praised Hong Kong chief executive Carrie Lam for her handling of the violence and protests during an official meeting in Beijing on Wednesday, a pro-China politician in Hong Kong was stabbed.

The central government had a high degree of trust in Lam and fully acknowledged the work done by her and her team, Han said at the beginning of a meeting with Lam in the Diaoyutai State Guesthouse in Beijing.

Ending the violence and resuming the public order are the top priority for the Hong Kong government, while the administration, legislation and judiciary should jointly achieve them, he added.

The central government supported the Hong Kong government to take effective measures to resolve people’s livelihood problems, which include housing problems for low and middle-income families and employment for young people, Han said.

Lam said she had been cheered up by Xi’s meeting on Monday evening. She said Xi’s trust and support in her and the Hong Kong government gave her stronger determination to end the violence in society.

Lam said the Hong Kong unrest had gone on for five months and the protesters’ nature had deviated from peaceful demonstrations. She said she felt sad that more than one-third of the arrested 3,000 people were students.

She said Hong Kong had originally been able to enjoy the new opportunities related to the Greater Bay Area and the Belt and Road Initiative, but they were being ruined by the escalating protests in the city.

The Hong Kong government had a strong determination to stop the violence as early as possible, she added.

Tanya Chan, a Civic Party lawmaker and the current convener of the pro-democracy camp, said Hong Kong had a separation of powers with judicial independence, while the Legislative Council also had a role to play in monitoring the administration.

Chan said she was worried that Han had called for the administration, legislation and judiciary to work together.

Lau Yui-siu, a Hong Kong-based political commentator, said the central government praised Lam as it needed Lam to stay and implement its orders. Lau said Beijing was worried that Lam’s weak leadership could shake the confidence of the civil servants and police force.

He said it was possible that the Hong Kong government would have to launch a national security law through legislative or administrative means.

Han urged Lam to lead her team to “restart and move on,” showing that the Hong Kong government would still have a lot more to do after the violence in society ended, said Lau Siu-kai, the vice-president of the Chinese Association of Hong Kong and Macau Studies.

Hong Kong protests have continued for five months with clashes between police and protesters happening every weekend, as well as on some weekdays.

Violent attacks also happened on the streets. On Sunday evening, a pro-Beijing man attacked several people with a knife in Taikoo Shing on Hong Kong Island. He also attacked some other people and bit off the left ear of a district councilor.

On Wednesday, Junius Ho Kwan-yiu, a pro-Beijing lawmaker, was stabbed by a man, who pretended to be a supporter while he was campaigning for the coming District Council election in Tuen Mun.

A man holding a bouquet of flowers approached Ho as the politician was campaigning in his constituency near the border with China.

Footage posted online showed the man handing Ho the flowers and asking for a picture. He then pulled a knife from his bag before striking Ho in the chest.

Police said three people were wounded in the incident, including the attacker, who was subdued by Ho and his aides as he shouted in Cantonese: “Junius Ho, you scum!”

Ho suffered a minor injury to his chest and was sent to a hospital. The identity of the attacker was not yet known.