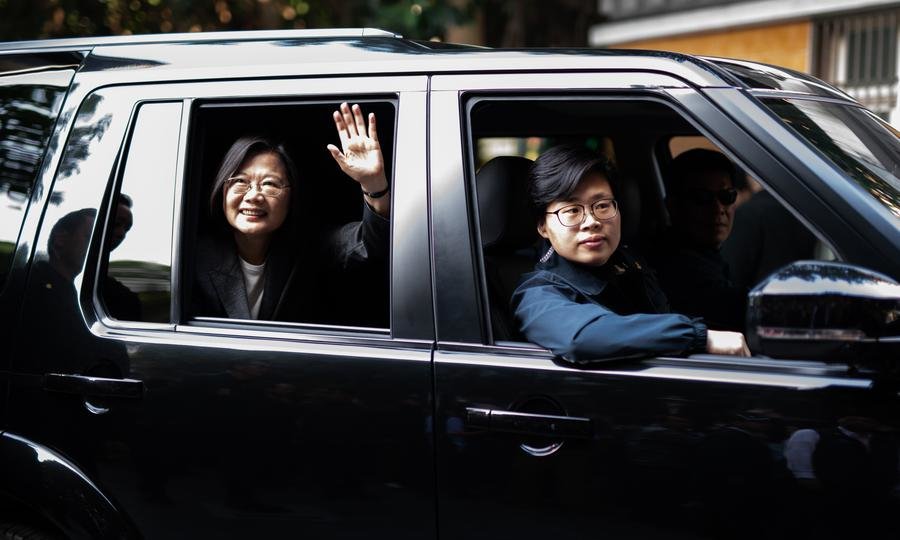 Over the next four years, relations between mainland China and Taiwan will remain the biggest issue for newly reelected Taiwanese President Tsai Ing-wen.
Presidential candidate Han Kuo-yu of the Kuomintang party (KMT) conceded defeat Saturday night, paving way for the return of Tsai.

“I’ve already called President Tsai Ing-wen and congratulated her,” Han said, according to Hong Kong broadcaster RTHK. “She’s been authorized by Taiwanese people to lead the island in the coming four years. Democracy, freedom and the rule of law are Taiwan’s core values. Taiwanese people have made a decision. As candidates, we will absolutely accept the election results,” he said.

Millions of Taiwanese voters went to the poll stations Saturday to elect their leaders including the president and 113 Legislative Yuan members. Many overseas Taiwanese flew back to the island to cast their votes. Around nightfall unofficial live tallies kept by major local news networks showed the 63-year-old Tsai securing around 56-57 percent of more than 10 million votes counted so far.

This election was seen as an important chance for the 19.3 million Taiwanese voters to express their views on cross-strait relations, given Beijing’s proposal to reunify with Taiwan by replicating Hong Kong’s “one country, two systems” model on the island.

Tsai, the candidate of the Democratic Progressive Party, and Han both said that “one country, two systems” would not be suitable for Taiwan, which would not give up its own sovereignty.

However, Han favored much closer ties with China.

Yun Sun, director of the China Program at the Stimson Center of the Brookings Institution, told the Chinese website of BBC that with Tsai’s victory the mainland will continue to suppress the economy of Taiwan while seeking a dialogue with Tsai, watching to see if she can make some compromises.

If Tsai refuses to accept the 1992 Consensus, which refers to the “one China with different interpretations” principle, the compromises can be some other things such as an amendment of her party’s constitution to rule out “Taiwan independence,” Sun added.

Last November, Tsai indicated her willingness to meet with Chinese President Xi Jinping in a third location when conditions are ripe, such as after her hoped-for re-election. Tsai said the only prerequisite for a meeting with Xi would be Beijing’s respect for the island’s sovereignty and security needs – a demand that Xi is unlikely to agree to.

Some political analysts remained skeptical whether a meeting between Tsai and Xi will be possible, given that Beijing has never ruled out the option of occupying Taiwan by force.

On January 2 of last year, Xi gave a speech to mark the 40th anniversary of the issuance of the “Message to Compatriots in Taiwan” sent by the Standing Committee of the National People’s Congress of the People’s Republic of China. He said Beijing would try its best to achieve mainland-Taiwan unification but would not give up the option of achieving it by force. He said Beijing would take all possible measures to fight against Taiwan independence.

In March 2019, Wang Yingjin, director of Center for National Unification Research, Renmin University, put forth a new version of “one country, two systems” for Taiwan. Wang proposed that, after the mainland and Taiwan unified, the island’s leader would not be appointed by the central government and would have no need to report to Beijing. He said Taiwan’s top leader should enjoy certain diplomatic rights, he added.

The Tsai administration has rejected such a resolution on many occasions, saying that the “one country, two systems” model has been proven a failure in Hong Kong’s extradition law saga.

Taiwanese journalist Yang Chien-Hao told Asia Times that in general people in Taiwan are not too worried about the mainland’s possible military invasion of the island as the cost for Beijing to do so would be very high if the United States, or even Japan, intervened. Yang said that since Tsai took office in 2016, a lot of overseas Taiwanese businessmen had returned to Taiwan as they were not afraid of worsening cross-strait relations.
Add Comment