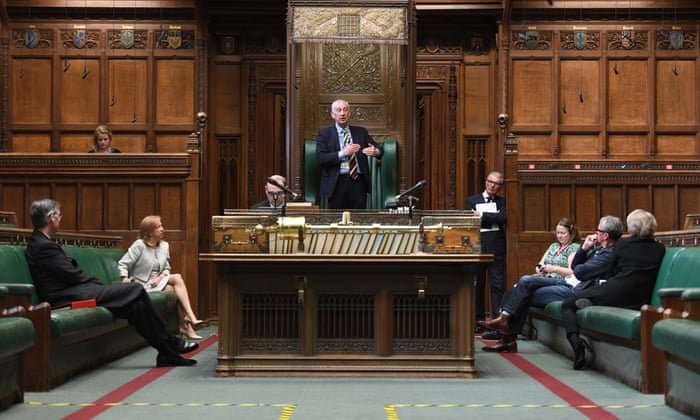 A semi-digital Westminster will mean less posturing and preening by MPs. That suits the crisis we’re in
When politicians think they are writing history they are often just doodling in its margins. Even when obviously momentous things are happening, it isn’t easy to know in real time what mark will be left by specific actions – or inaction.

One day Boris Johnson might look back and wish he had done more, faster, to avert the spread of Covid-19. He might wish he had hastened the country into lockdown sooner; gripped tighter the logistics of testing and supplying protective equipment. How much he wishes those things will depend on how harshly he is judged in the future. He looks safe enough today. Polls showing about 50% support for the Tories suggest a lenient court of contemporary opinion.

Maybe a catalogue of government negligence just isn’t what the public feels like reading right now. There is an instinct to rally around incumbent authorities in an emergency, and an invisible viral enemy is uniquely unsettling. The idea that our lives might be in the hands of political chancers or fools is so alarming that people project competence where they want to see it. The wish for good leadership begets the belief that we are well-led.

Johnson’s infection by the virus also made his physical vulnerability more salient than his professional fallibility. It bestowed some immunity from public scorn. As with pretty much everything about the coronavirus, we can only wonder how long that will last.

Ministers naturally want to wrap themselves in the blanket of national solidarity woven by collective trauma. They rebut the charge that bad choices cost lives with the assertion that those choices were the best ones available at the time, based on what (some) scientists were saying.

Defending the government’s record over the weekend, Michael Gove promised that “profound lessons” would be learned, but that such a reckoning should come “at some point in the future”, as if it would be tasteless to ask who is responsible for avoidable deaths when people are still dying.

It is true that hard decisions look easier with hindsight. And it is reasonable to presume that ministers were trying to do the right thing and not, as hysterical online critics allege, conspiring to euthanise swaths of the population. It should be possible to think the government messed up while also appreciating that it is staffed by human beings under stress, not evil warlocks. But Britain has never been great at measuring political performance with nuance. The two settings are hard-boiled contempt and soft-soap indulgence.

The deployment of wartime metaphor in Whitehall further narrows the space for constructive criticism. The blitz analogy implies that there is something unpatriotic in the exposure of government errors. That would be true if the disease was emboldened by political dissent, but it doesn’t care. There is no fifth column of pro-virus agents poised to exploit divisions and weaken our defences. The government doesn’t like reports of its bungling in this crisis for the same reason that governments have always hated scrutiny. Turning up the martial mood music is meant to drown out awkward questions.

The return of parliament this week, albeit in semi-digital form, ought to change the dynamics. It helps that Labour has a leader capable of scrutinising government through a lens not skewed by dogma. Keir Starmer has conspicuously foresworn petty point-scoring and is respected enough by sensible Tory MPs that his judgment counts for something in the House of Commons. Whether such ecumenism can counteract the centrifugal force exerted by party fringes is less clear.

Yet even a capable opposition might struggle to hold government to account by video link. Remote debating and voting systems are works in progress, and Westminster culture does not lend itself to sudden innovation. Technical difficulties are exacerbated by the arcane procedures that have grown out of the architecture of the building itself – the lobbies, tea rooms and corridors. The labyrinthine Gothic palace has sprouted thickets of peculiar ritual. Modernisers have long wanted to scythe through the impenetrable tangle, but traditionalists fear damage to the organic fibres of British democracy.

New arrangements are supposed to facilitate something called “hybrid scrutiny”, but there is a risk that they recreate only a synthetic tissue of scrutiny that ministers can wear for show, without being discomfited by persistent questioning. On the upside, there might be less of the am-dram preening and sycophantic posturing that pad out a lot of analogue parliamentary proceedings.

There are already signs of an improved political tone outside parliament.

BBC Question Time is more watchable in its sober, socially distanced format. It is sad but not surprising that banishing the studio audience brings out the best in politicians. That isn’t meant to sound elitist. It isn’t the fault of the public that guests on a politics show crave applause too much to dare giving a straight answer.

The absence of a crowd can make politics less gladiatorial, but so does scientific uncertainty at the heart of the issues being discussed. It is still possible to argue about the coronavirus response from behind the old partisan lines, and plenty of people are trying. There is a current of libertarian impatience with lockdown that flows through ideological channels already carved by supporters of a hard Brexit. There are Labour tribalists who refuse to believe that a Tory prime minister could be sincere in admiration for an NHS that saved his life. But the majority appears content to accept that this is not a moment that fits the familiar binary templates. There is no pro-virus party whose candidates have to be invited on to the BBC for balance. There are not two sides to the question of whether we want the disease.

That doesn’t remove the need for scrutiny. Starmer can seek the same outcome as Johnson without deferring to his methods. It is ridiculous to think having a common goal means suspending opposition, but it was also ridiculous in pre-Covid times to think that having different goals demanded constant, enraged, polarised debate.

Conditions of lockdown and the atmosphere of national emergency make it harder to hold government to account, but they also expose how bad British democracy already was at doing grownup scrutiny. The crisis is showcasing the potential for a more deliberative, constructive way of doing politics. It could catch on, but only if we recognise it, embrace it, cultivate it – and don’t leave it as a doodle in the margin of these historic times.
#COVID-19  #Covid  #Coronavirus  #Boris Johnson
Add Comment