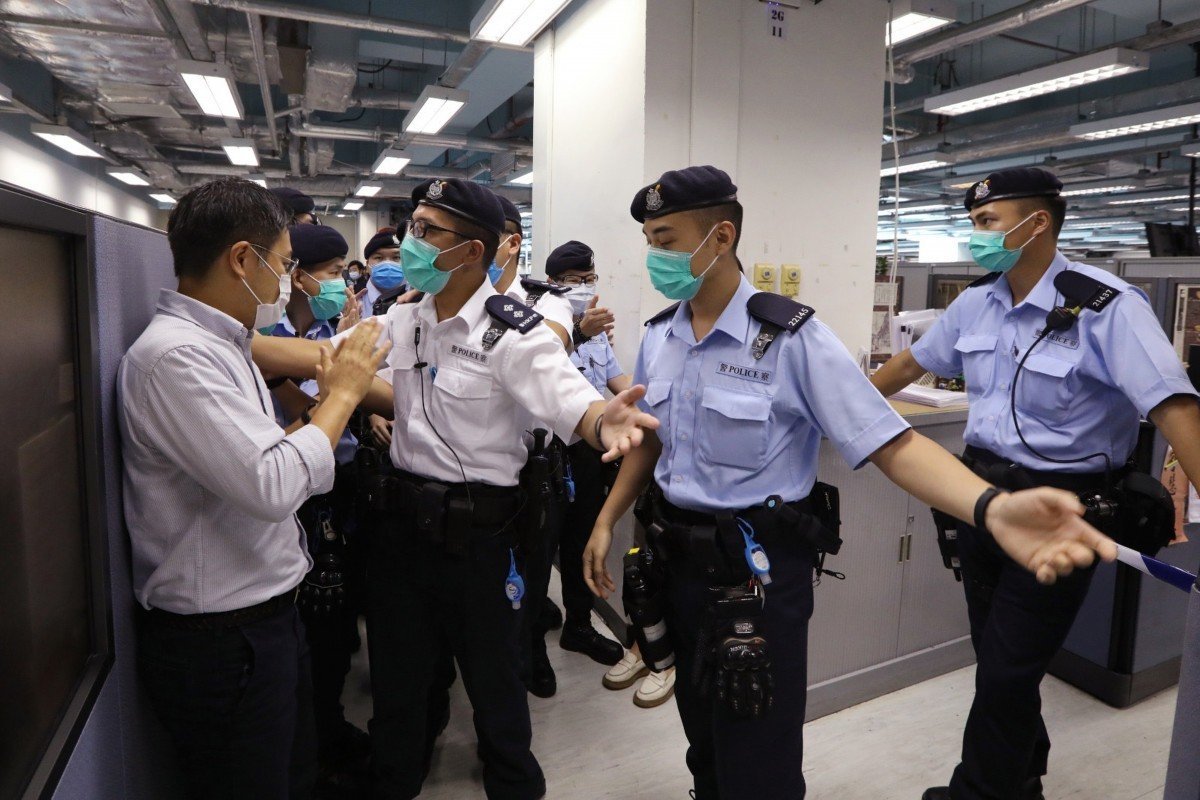 Confrontations between editors and police over warrants, access seen by thousands as newspaper’s staff takes to Facebook during raid. ‘You swallow whatever is served on your plate’, founder Jimmy Lai tells live audience, while admitting uncertainty about the paper’s future

In scenes broadcast live online by Apple Daily’s own reporters, the newspaper’s founder, Jimmy Lai Chee-ying, his hands handcuffed behind his back, was escorted to his office on Monday morning by scores of police officers.

The media mogul behind the tabloid-style newspaper was arrested shortly after daybreak at his Ho Man Tin residence on suspicion of violating the sweeping national security law that Beijing has imposed on the city.

A few hours later, at about 9.45am, an estimated 200 officers raided the publication’s office in the Tseung Kwan O industrial estate. While few journalists were in the office yet, those who were began streaming the raid on the publication’s Facebook page.

Police inside the newsroom requested that everyone show their staff IDs, while one officer initially told the journalist handling the live broadcast to stop or risk getting into trouble for obstructing officers.

The staff member refused and kept filming. “It is our duty to report, and we will do our very best here, until we are banned from doing so,” the journalist said on the live feed.

Police could then be seen walking around the newsroom, flipping through files and documents on some of the desks, leading the paper’s editor-in-chief, Ryan Law Wai-kwong, to demand they show him which areas of the newsroom the warrant allowed them to search.

The officers ignored Law and asked him to take his complaints, including the fact a lawyer for the newspaper had been barred from entering the building, to more senior officers.

Outside, journalists were arguing with members of the police public relations branch ahead of Senior Superintendent Steve Li Kwai-wah’s briefing with reporters, as the force said only select representatives from well-known media outlets that had not obstructed police operations in the past would be allowed to attend.

Journalists from Stand News as well as foreign wire services were among those barred from attending the briefing.

Li told those allowed to attend that a search had been conducted in the second-floor editorial department because the offices of some of the suspects were situated on that floor. 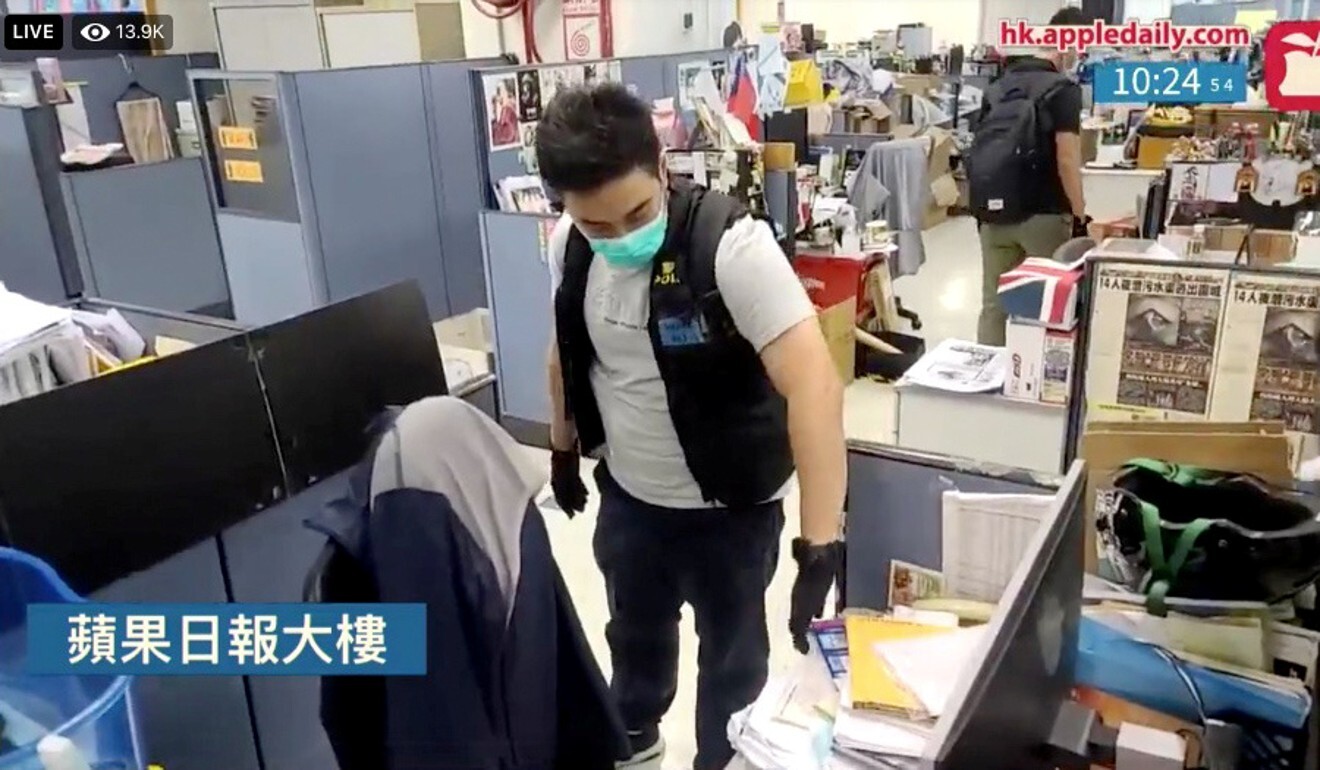 He said he was aware there were news materials in the newsroom and that officers had been sent in to do an “initial screening” to determine which areas could be searched and which could not, assuring that areas with news materials would not be.

In a separate nighttime briefing, Li said he realised journalists were dissatisfied that some officers appeared to be looking at documents on desks, which was why he had subsequently told officers to leave the editorial department.

Kwok Ka-chuen, chief superintendent of the police public relations branch, admitted police had allowed only selected journalists to enter cordoned-off areas. The move, he said, was designed to improve transparency of police operations, but he added he would listen to feedback from the outlets that had been barred. 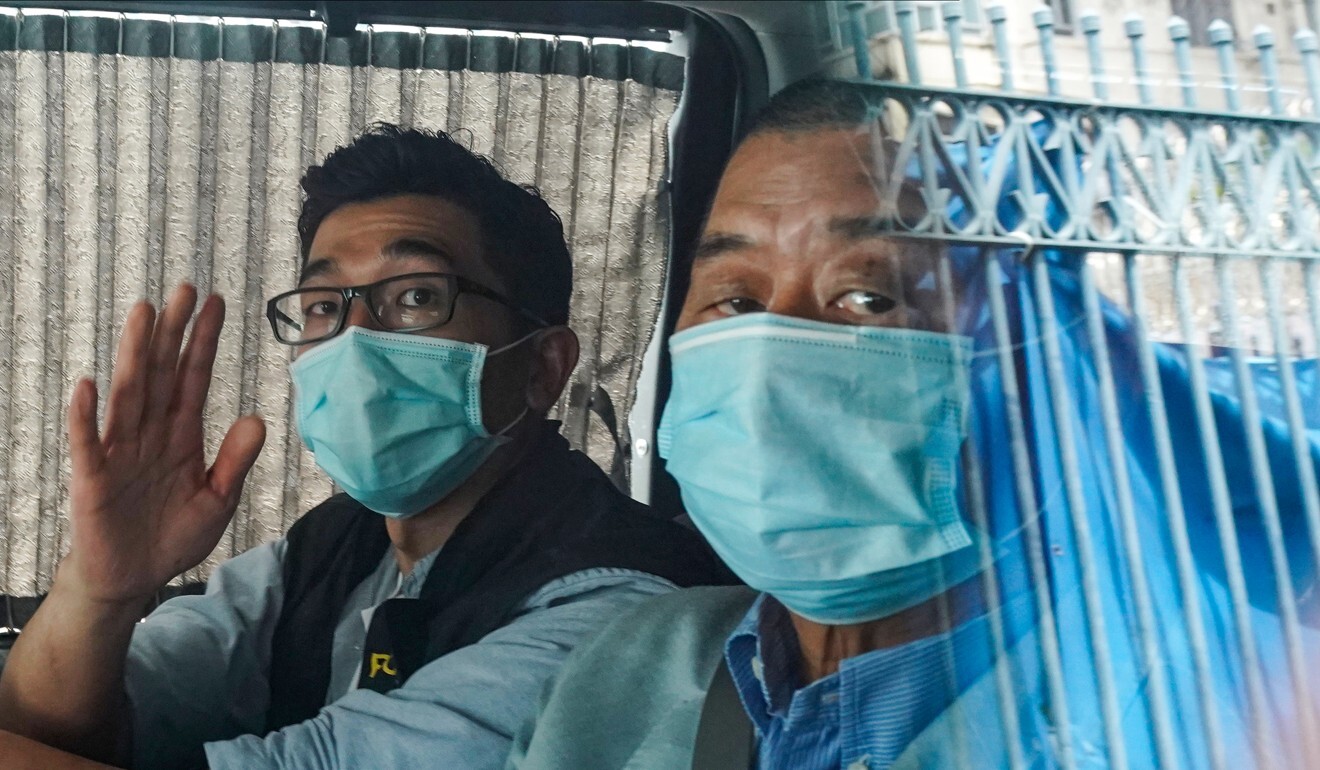 Apple Daily founder Jimmy Lai (right) is seen in custody outside the Mong Kok after his arrest on Monday. Photo: Felix Wong

But Chris Yeung Kin-hing, chairman of the Hong Kong Journalists Association, said police had indeed gone through journalists’ documents, decrying what he called an attack on press freedom.

“It was shocking and terrifying that the officers went through every corner of the newsroom,” he said. “This may have happened in third-world countries but I have never seen this happen in Hong Kong.”

The News Executives’ Association also expressed concern and regret that some journalists had not been not allowed to attend the police briefing earlier in the day.

Apple Daily’s lawyers were eventually allowed into the building and Lai was brought by the police to his office on the second floor of the building at about 11am.

An hour later, Cheung Kim-hung, chief executive of Next Digital, Apple Daily’s parent company, was also brought to his office on the same floor, his hands handcuffed behind his back. Hong Kong police conduct a raid of the offices of the Apple Daily newspaper after arresting its founder Jimmy Lai on Monday morning. His two sons and some of the newspaper’s senior executives were also taken into custody. Photo: Handout

Law, the newspaper’s top editor, tried to get closer to Lai, but was warned by police he could be arrested for obstructing officers in the execution of their duties.

He later argued with Li, the superintendent, complaining that some journalists were unable to return to their desks and work as some areas of the newsroom remained cordoned off. Li initially suggested letting them return to their seats, if they did not take photos of the ongoing police operation. He later decided it was permissible.

Lai left the premises at about 1.30pm, and when asked by an Apple Daily reporter for his thoughts during the live broadcast, said he was not sure about the newspaper’s future.

“You swallow whatever is served on your plate,” Lai said, using a Cantonese expression meaning to improvise.

As Cheung was escorted away by police 30 minutes later, he said: “For sure, Apple Daily will hang in there.”

Lai has been a staunch support of the city’s pro-democracy movement and his paper has always been critical of the authorities.

Next Digital said in its annual report this year that it had about 2,300 employees, among them, 1,275 in Hong Kong and 1,047 in Taiwan. There are about 70 journalists on Apple Daily’s Hong Kong desk alone, for example.

Police seized about 25 plastic boxes of evidence in total from the building.

The police cordon on the second floor was removed shortly after 2.15pm, but officers remained in the building throughout the day. 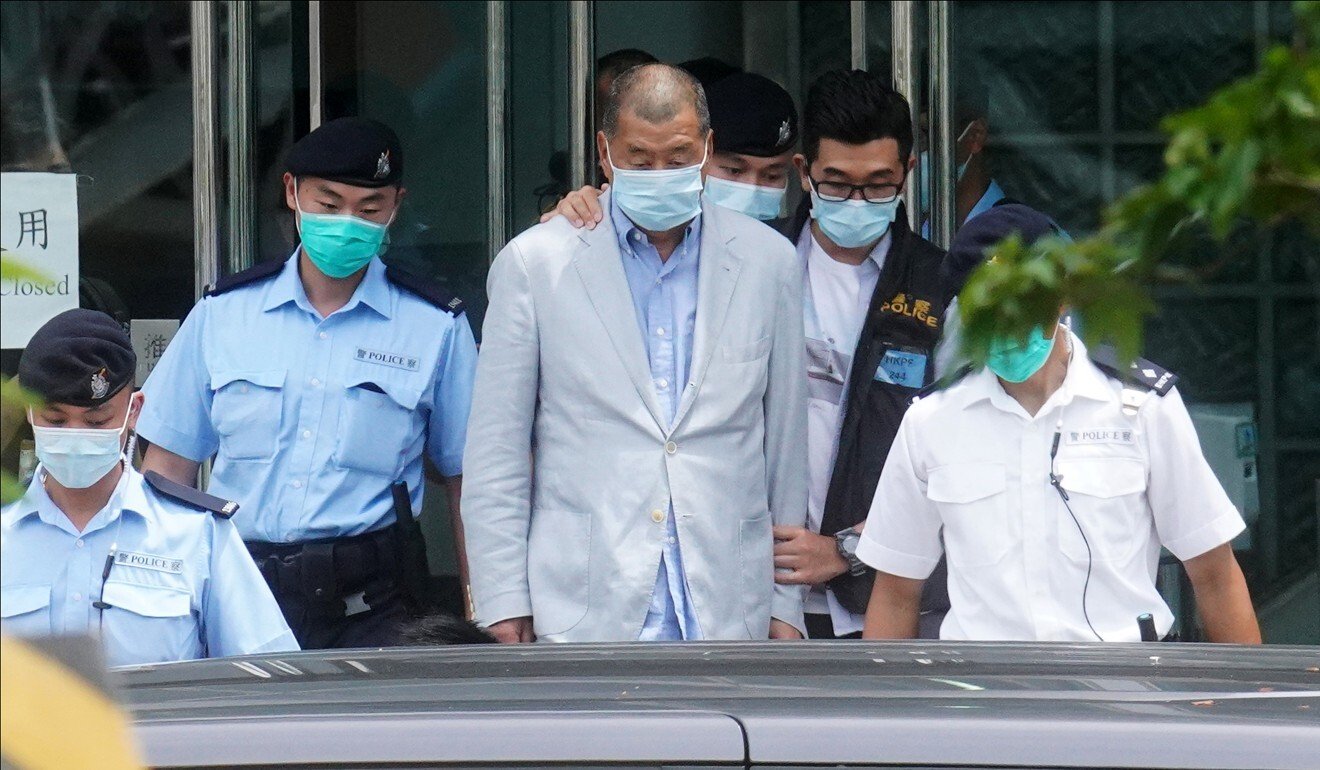 Amid the operations, several pro-government supporters popped a bottle of champagne outside the premises. One of them, Fu Chun-chung, said Lai “deserved the punishment”.

Earlier this year, Lai said he always believed he might be sent to jail for his calls for democracy in the city. But he has stressed he would not leave Hong Kong.

The last time law enforcement officers conducted a large-scale raid of a city newsroom was in 2004. In July of that year, officers from the Independent Commission Against Corruption raided six newsrooms, including the South China Morning Post, Apple Daily and Sing Tao over another case.

Alex Lam, an Apple Daily principal reporter and spokesman of its employee union, said: “Many of my colleagues were angry. But we must stand firm at our posts and do our jobs.”