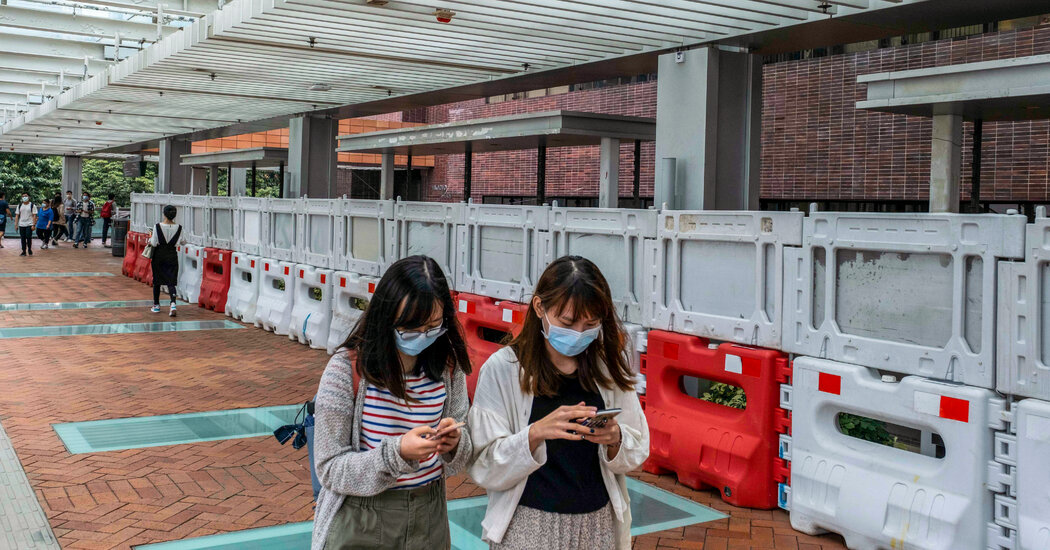 Campuses have long been hubs of protest in the city. Now, the authorities have promised to root out teachers who bring politics to the classroom.

When Harry Wu, a professor of medical humanities at the University of Hong Kong, gave a lesson last fall about doctors’ responsibilities in society, he focused on a real-world example: the volunteer medics treating protesters and police in the antigovernment demonstrations convulsing the city.

But this semester, after China imposed a new national security law on Hong Kong, Professor Wu hastily reworked his lesson plan. He included photographs of the protests in his lecture slides, but did not explicitly address them. Before uploading the slides to a university portal after class, he deleted the photographs altogether.

“It’s right in front of your eyes, but you don’t have any opportunity to talk about this in class,” he said.

As China tries to quell the political upheaval in Hong Kong, the city’s universities — ranked among the best in Asia, if not the world — have become potent symbols of the shrinking space for dissent or even discussion.

Politically active professors have been fired or denied contracts, in what they call retribution for their criticism of the government. Students are requesting more secure platforms for submitting assignments. Scholars are reconsidering whether Hong Kong is a viable home for their careers.

Even seemingly politically neutral fields, like medicine, have become potential minefields. Professor Wu plans to move to Taiwan next year. 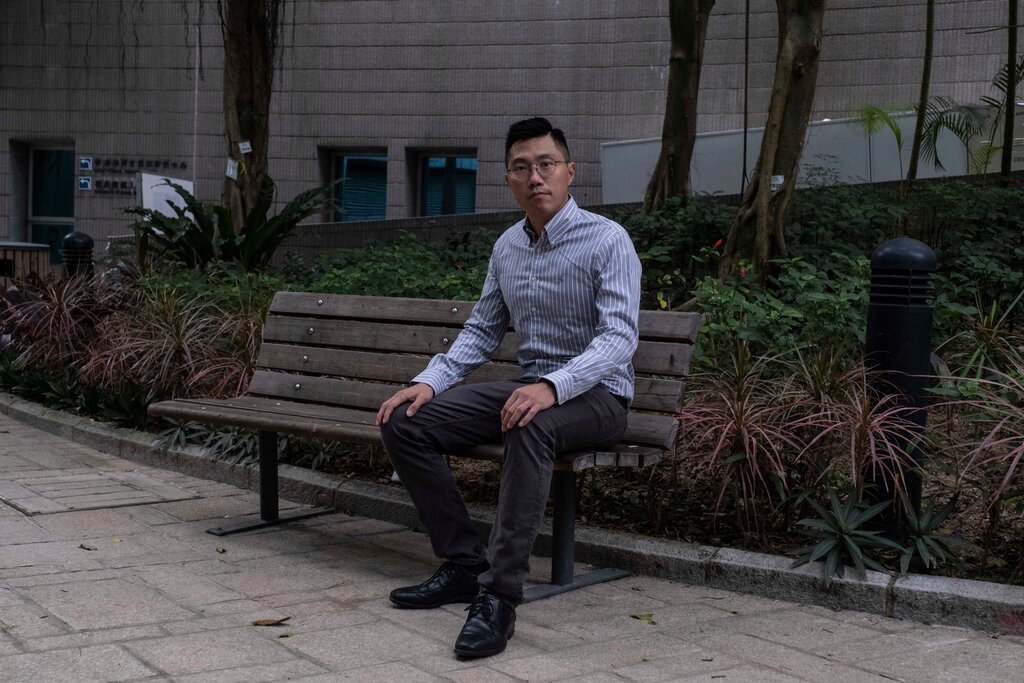 Harry Wu, a professor of medical humanities at the University of Hong Kong, said he plans to move to Taiwan next year.

The new law, which gives Beijing the broad power to crack down on political dissent, has even altered universities’ physical landscapes.

Government officials have been open about their intent to subdue the once-freewheeling campuses, even as they insist that academic freedom remains intact. Hong Kong’s chief executive, Carrie Lam, said last month that the city’s education secretary would meet with university presidents to discuss how they would roll out the law at their institutions.

“If they no longer have the ability to meet the requirements, then law enforcement of course will have to go in and resolve it,” she said.

The scrutiny is part of a wider campaign to control education. The Education Bureau has offered to review textbooks, and last month it stripped a primary schoolteacher of his teaching credentials for discussing Hong Kong independence. Beijing’s top official in Hong Kong has called on the government to bolster “patriotic education.” 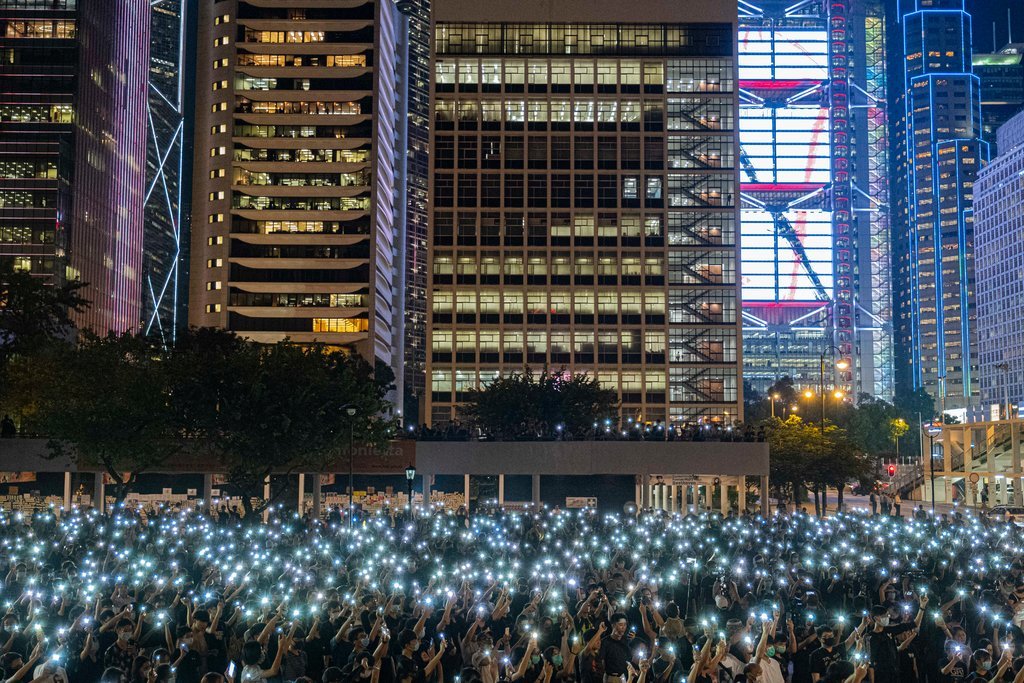 Students at an antigovernment rally in Hong Kong’s Central district in August 2019.

The impact on universities could be particularly important to the government given their historical role as incubators of social movements.

Student unions led the monthslong pro-democracy protests in 2014 known as Occupy Central. The idea of occupying Central, the city’s business district, was proposed by a University of Hong Kong law professor, Benny Tai, who was fired for his involvement in that movement this July.

Students were also among the most devoted protesters during last year’s demonstrations, which were sparked by a now abandoned bill that would have allowed extraditions to mainland China. Two of the most violent confrontations between protesters and police unfolded on college campuses, including a two-week siege at Hong Kong Polytechnic University.

Even before this year, professors who supported democracy were denied promotion. In late 2019, the government retracted $200 million in funding for three universities, which one of the schools’ leaders said was retribution for student involvement in the protests. 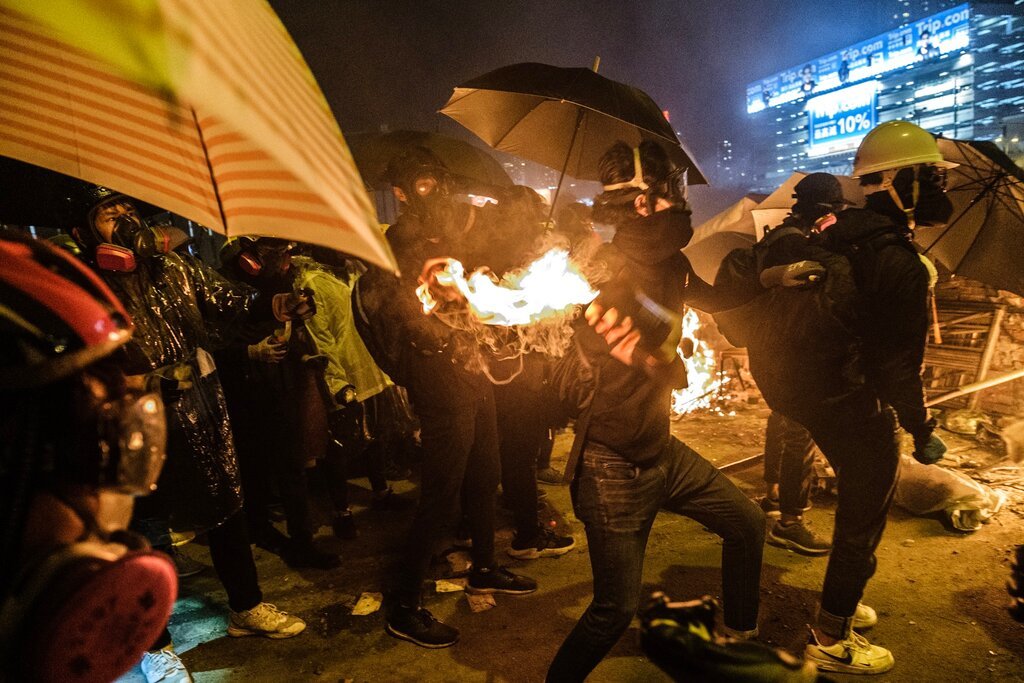 Protesters threw firebombs at the police from behind barricades at Hong Kong Polytechnic University, where violent confrontations unfolded last year.

The security law, enacted this summer, specifically orders the government to increase supervision over universities. Mrs. Lam has promised to root out “black sheep” who “bring politics into the classroom.”

“The message is loud and clear that the government is watching what the universities are doing,” said Johannes Chan, the former dean of the University of Hong Kong law school.

The result is a pervasive air of suspicion. As some faculty and students feel increasingly observed, they themselves have turned a more distrustful eye on their institutions.

More than 4,000 people signed a petition last month opposing the University of Hong Kong’s selection of two professors from Tsinghua University in Beijing for top administrative posts, citing fears the appointments would erode academic independence. They pointed to a Tsinghua webpage that listed one of the nominees as a Communist Party member, which was scrubbed after media inquiries.

A University of Hong Kong official called the allegations unsubstantiated.

Some students were equally skeptical of the university’s decision to dismantle their protest wall. The university said it was done to ensure “traffic flow.” But Tracy Cheng, vice president of the university’s student union, said she thought the reason was fear of the law. Hong Kong’s pro-Beijing newspapers had written several articles describing the display as a violation of the law. 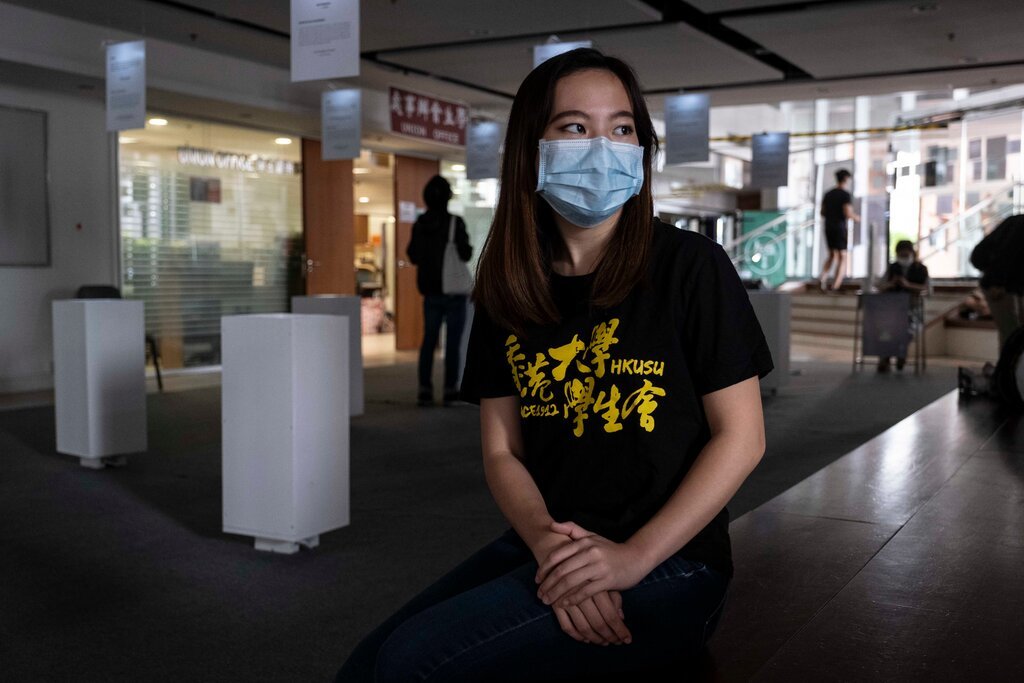 “We kind of understand that the university is afraid,” said Tracy Cheng, the vice president of the University of Hong Kong’s student union.

“We kind of understand that the university is afraid,” said Ms. Cheng, a third-year student. “But we still feel like this harms the freedom of speech.”

The Chinese University of Hong Kong has been explicit in its acceptance of the law. On Wednesday, the school released a statement denouncing promotional posters for a student-organized exhibit about the protests, accusing them of having “a biased description” of the events. The university “solemnly reminds students not to challenge the law,” it said.

The coronavirus pandemic has heightened the unease by forcing most classes to be held online. Some students and professors worry the format leaves them vulnerable to surveillance.

When Chow Po Chung, a professor of political philosophy at the Chinese University of Hong Kong, gave a recent online talk on the philosopher John Rawls’s book, “A Theory of Justice,” none of the several hundred attendees turned their cameras on. Many used false names.

A student asked if she could submit a paper to him directly, rather than uploading it to a portal used to detect plagiarism. She said she didn’t know if the portal was secure.

While he believed it was, he has concerns of his own. In previous years he has taught a class that explored the feasibility of secession, drawing on Quebec or Scotland. Now he wonders whether those conversations might be forbidden.

“Before, you thought of this as an academic discussion,” he said. “It didn’t have that kind of meaning.”

Outright censorship or punishment, tied to the law, remains rare. But the prospect is creating a climate of fear.

Many academics said the firing of Mr. Tai by the University of Hong Kong sent a warning. The school dismissed him over his conviction related to his leadership of the 2014 protests, even though the faculty senate recommended he be allowed to stay. 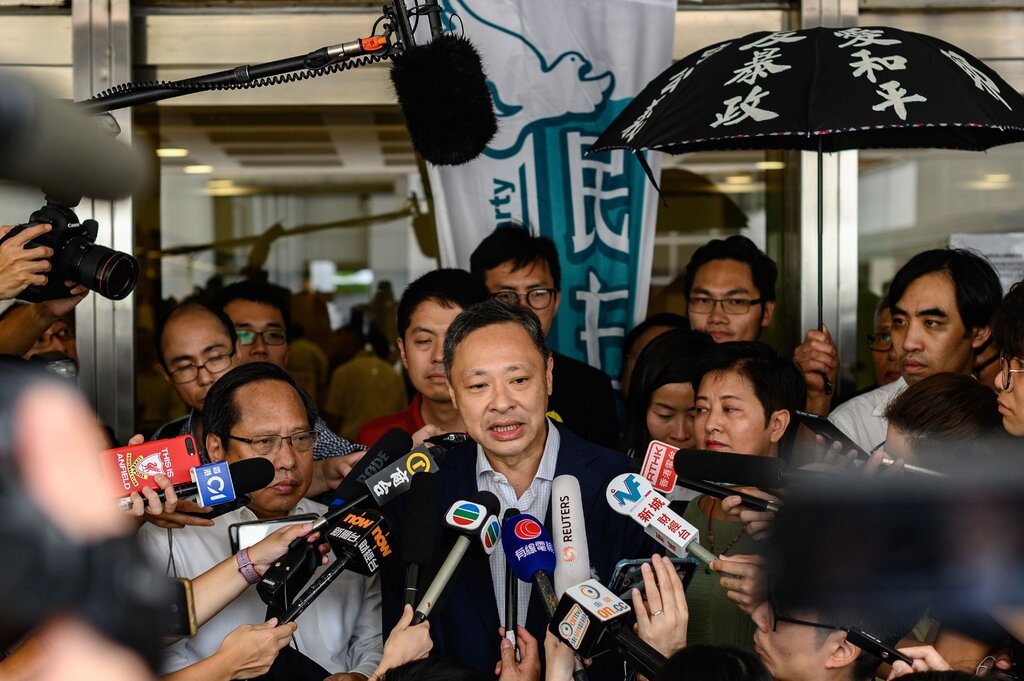 “When there’s a Benny Tai, you know they can do that again and again, until they have the situation they’d like to see,” said Stephen Chan, a professor of cultural studies at Lingnan University, adding that he was re-examining his syllabus for potentially sensitive material.

Ip Iam-Chong, who teaches in the same department, said administrators would proactively discourage staff from speaking out.

“Most people just want to keep the status quo,” said Professor Ip, whose own tenure application was rejected this summer. The university never raised politics as a reason, but he believed that his criticisms influenced the decision; he founded InMedia HK, a forum for pro-democracy writing.

A spokeswoman for Lingnan said that all personnel decisions were based on academic merits.

The sensitivities can cut both ways in this highly polarized atmosphere. Some academics described fears of offending students with different political views.

Petula Ho, a professor of social work at the University of Hong Kong, said she found it difficult to offer critiques — even supportive ones — of the protest movement. She said students had castigated her for discouraging clashes with police.

Some professors have looked outside the classroom to teach more freely. Since being fired, Mr. Tai has begun hosting private talks on how to defend the rule of law.

“If you do not allow people to talk about these sensitive concepts in universities, in schools, then students will not just learn from schools and formal curriculums,” he said. “What we can do is to use social media, civil society, to continue the work.” 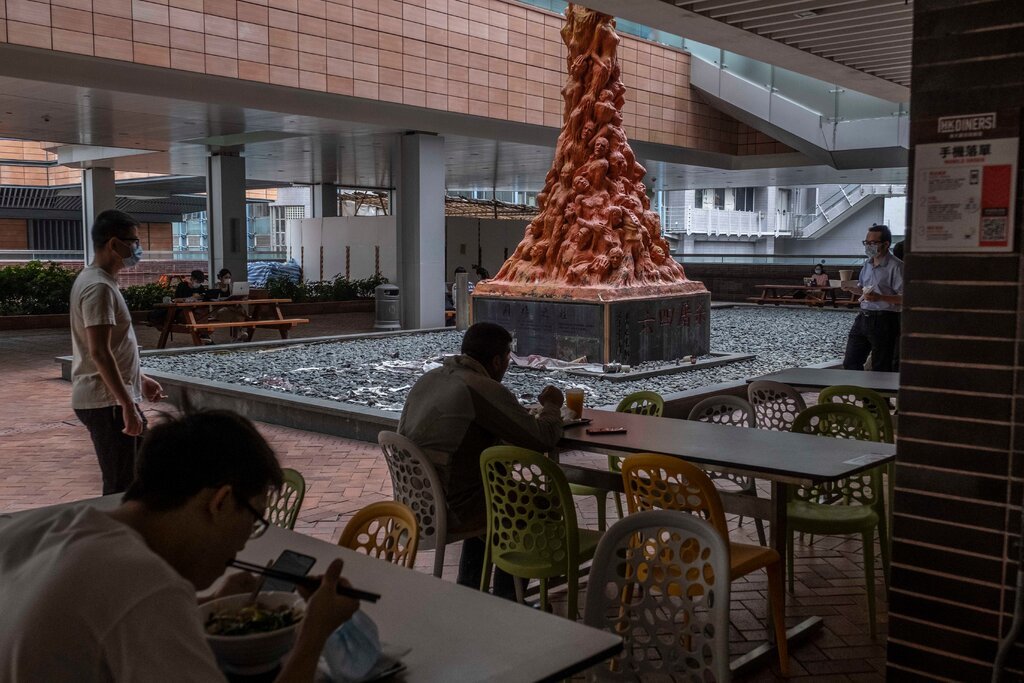