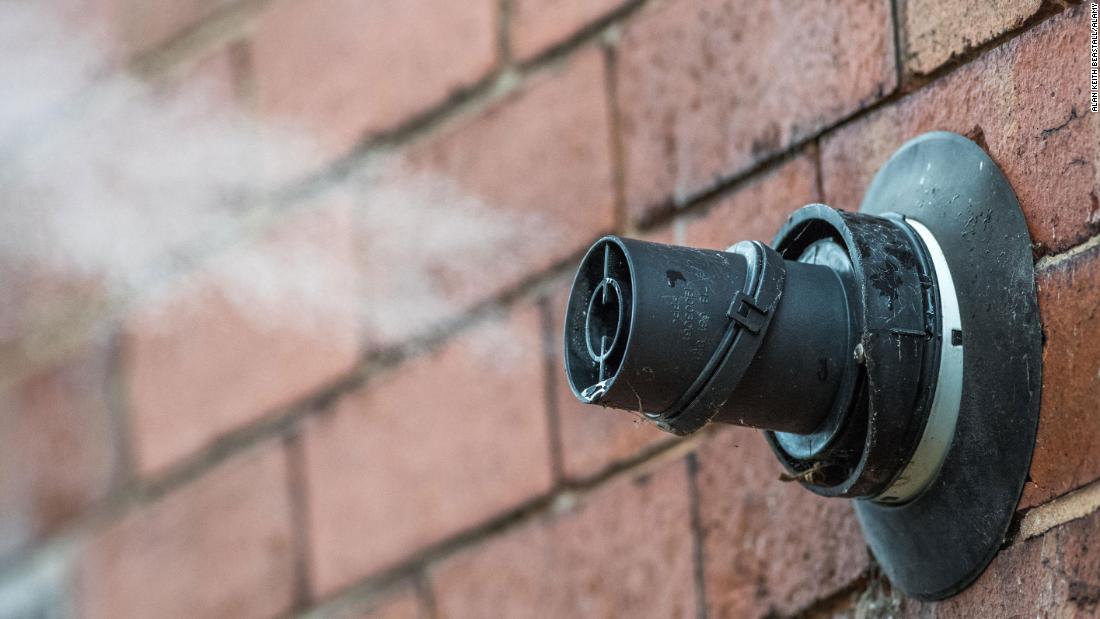 As gas prices soar, people are mulling alternatives to heating their homes. Here's what to know

Soaring natural gas prices have raised the specter of cold homes and inflated energy bills for millions of people over winter across Europe and the United States, where most people rely on gas-fired boilers for heat and hot water.

At the same time, pressure is mounting on world leaders ahead of the COP26 international climate talks to rapidly reduce the use of fossil fuels, including natural gas. The gas shortage and sense of urgency around the climate crisis have raised an important question: Is there a better way to heat our homes?

Here's what you need to know.

What are the alternatives to gas and what exactly is a heat pump?

As gas prices soar, some countries have had to restart coal plants to fill the gap in electricity production. But there are cleaner alternatives for powering your home.

Rooftop solar panels: These are particularly good for heating water. With the right support, residents can store energy themselves and sell unused power back to the national electricity grid, but subsidies and incentives vary across countries while upfront costs can be higher than for conventional water heating systems. Globally, domestic solar power met only 2.1% of space and water heat demand in 2018, according to the International Energy Agency (IEA).

Green hydrogen: This fuel has also been touted as a clean alternative since it can be derived from sources like water, rather than fossil fuels, and is produced with renewable energy. But the fuel is still in development phase, and some experts say that using solar or wind energy to produce another fuel right now is a waste of precious renewables. Green hydrogen is widely seen as appropriate for heavy industry and large vehicles, like planes and ships. 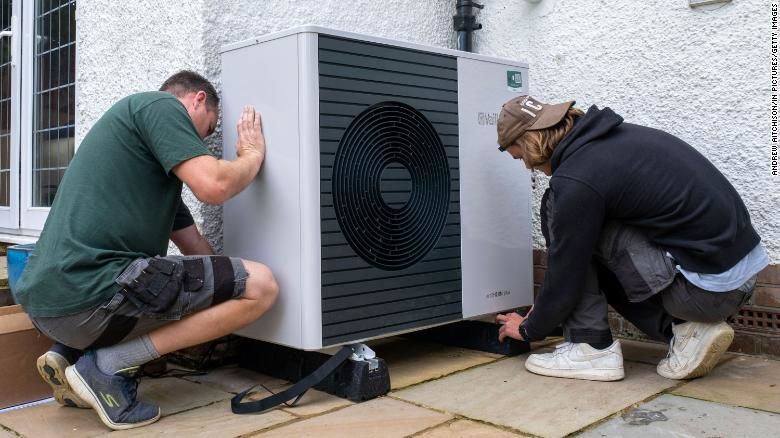 An air source heat pump unit is installed at a 1930s-built house in Folkestone, England, on September 20, 2021.

Between 2007 and the end of 2020, nearly 15 million heat pump units were installed across the 21 countries in Europe for which it has data, the European Heat Pump Association (EHPA) said. Of those, 1.6 million were installed last year, with Germany, France and Italy accounting for nearly half of those sales.

"If the government wants a chance to catch up, it needs a proper strategy and enough cash to clean up our homes on a massive scale. This means substantial grants for heat pump installations, especially for the poorest families, removing VAT on green home technologies and a phase out of gas boilers early next decade," said Greenpeace UK's policy director, Doug Parr.

The UK government is due to set out its plans to cut carbon emissions from homes in a policy paper in the coming weeks, ahead of the COP26 summit. 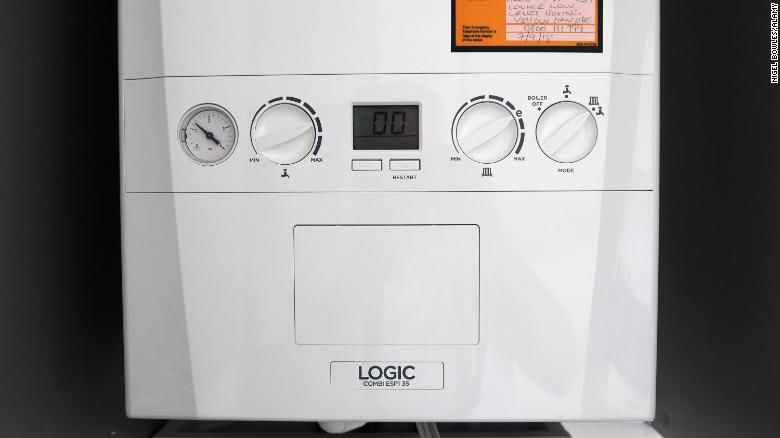 Gas boilers provide heating and hot water to millions of homes around the world.

The US is moving quickly to install heat pumps in new homes. According to the IEA, the share of heat pump sales for new buildings exceeds 40% for single-family dwellings and is near 50% for new multi-family buildings. Ground source heat pumps are more common in the US than anywhere else -- accounting for more than half the 400,000 sold annually -- with sales boosted by a 30% federal tax credit in past years, the IEA said.

Worldwide, nearly 20 million households purchased heat pumps in 2019, up from 14 million in 2010, according to the IEA. Most of this growth is from higher sales of reversible units that can also provide air conditioning, it said, reflecting an increased need for cooling as well.

Despite this growth, heat pumps still meet less than 5% of global heating needs in buildings, the IEA said.

Gas is getting expensive, but is it worsening the climate crisis?

While some countries, like the UK, celebrate their phase-out of coal, they are using more gas -- but natural gas isn't exactly a low-emissions fuel either.

It is more efficient than coal and emits less carbon dioxide when burned, but it's made mostly of methane, a harmful greenhouse gas that can leak into the atmosphere from gas pipelines and abandoned wells and cause significant warming. The UN climate change report published in August emphasized the urgent need to control methane emissions.

Methane has more than 80 times the global warming power of carbon dioxide and leaks from active and abandoned gas wells, as well as from other sources.

Its concentrations in the atmosphere have been rising since the mid-1980s, and more rapidly over the past decade.

The US and European union have agreed to slash methane levels by 30% by the end oft he decade and is rallying other nations to do as well. 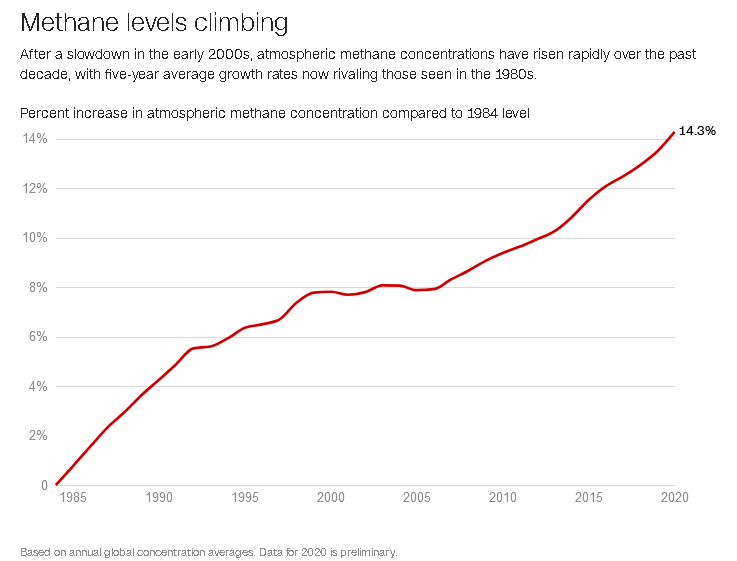 The European Union is a little less reliant. Natural gas accounts for 32% of the 27-country bloc's energy consumption in households, more than fossil fuel-powered electricity (25%), renewables (20%) and petroleum products (12%), according to 2019 EU figures. But it is expanding and investing heavily in gas.

One issue affecting the urgency with which people view the need to switch away from natural gas may be as simple as its name.

"The findings suggest that climate communicators should describe natural gas using the terms "methane gas" or "methane," which is the main component of this energy source," the researchers concluded.

The IEA has said that no new fossil fuel boilers should be sold globally from 2025 if the world is to achieve net-zero greenhouse gas emissions by 2050, where the amount of emissions is not greater than those removed from the atmosphere.

Under its roadmap for the energy sector, published in May, sales of gas boilers should fall by more than 40% from current levels by 2030 and by 90% by 2050.

That's going to require a huge transformation. As many countries wean themselves off coal -- which is generally the biggest emitter of all widely used fossil fuels -- they are switching to natural gas as a "bridging fuel" during the transition to renewables playing a bigger role in the energy mix.

More than 80% of UK households are connected to mains gas and about half in the US use natural gas for home and water heating.

People don't necessarily have that much power over the energy sources for their homes, unless they are fairly wealthy. This also depends on where you live -- some countries have done more than others to help households move away from gas.

Also, if you're in a block of flats, as many people are, you may have even less of a say.

The UK government has said it plans to ban gas boilers in new-build homes from 2025, with low-carbon heating systems to be installed in their place. It also intends to stop the sale of new gas boilers from 2035.

But heat pumps remain expensive and their installation often also requires broader changes inside the property, said Katherine Ellsworth-Krebs, senior research associate in sustainability at the UK's Lancaster University. As well as replacing their individual gas boilers, people may need to install bigger radiators and underfloor heating to ensure their homes are warm enough.

Ground source heat pumps require space to either bury a pipe in a loop under a garden or dig a deep borehole. That's not always realistic in urban areas, where air source heat pumps -- which look a bit like air conditioning units -- are a better option. "They don't require as much space, but they're not as efficient," Ellsworth-Krebs told CNN.

The country's many older, draftier homes also present an obstacle, she said, since heat pumps produce a lower, constant form of heating that works best with a tight building fabric.

The UK government has been accused of flip-flopping on its policies on solar panels and heat pumps, with rebates that have been introduced and then withdrawn. Its flagship "Green Homes Grant" -- which was supposed to help hundreds of thousands of households improve their insulation and install low-carbon heating such as heat pumps -- was scrapped in March after just six months. 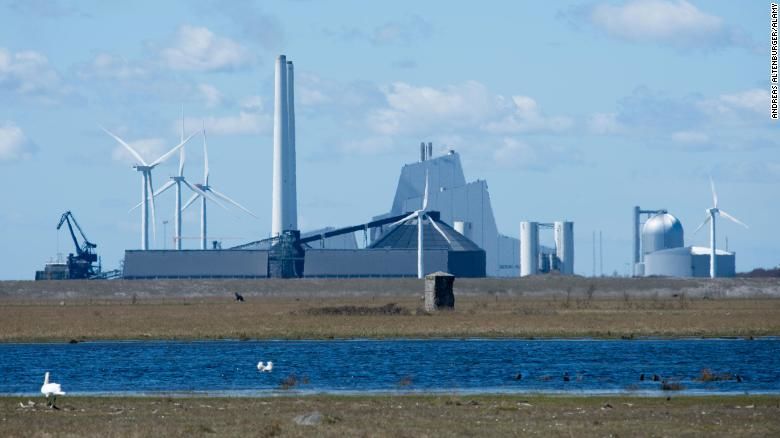 A view of Denmark's Avedore Power Station, which provides district heating to the Copenhagen metropolitan area.

The EU has set out ambitious plans in its Green Deal to help it meet a target of cutting greenhouse gas emissions by at least 55% by 2030, compared to 1990 levels. But reliance on fossil fuels varies widely across its 27 member states and some, particularly the less wealthy nations, may find it harder to transition their populations away from them for home heating and to renovate old building stock.

Ellsworth-Krebs believes the solution could be found in localized options, such as district heating systems, rather than relying on individual households to make the shift towards lower carbon alternatives. District heating systems work by distributing heat from burning waste or from geothermal activity, for example, through insulated pipes to homes across a city or community.

"I think it shouldn't be on you as a homeowner, or a landlord, to be making a lot of these big investments," she said.