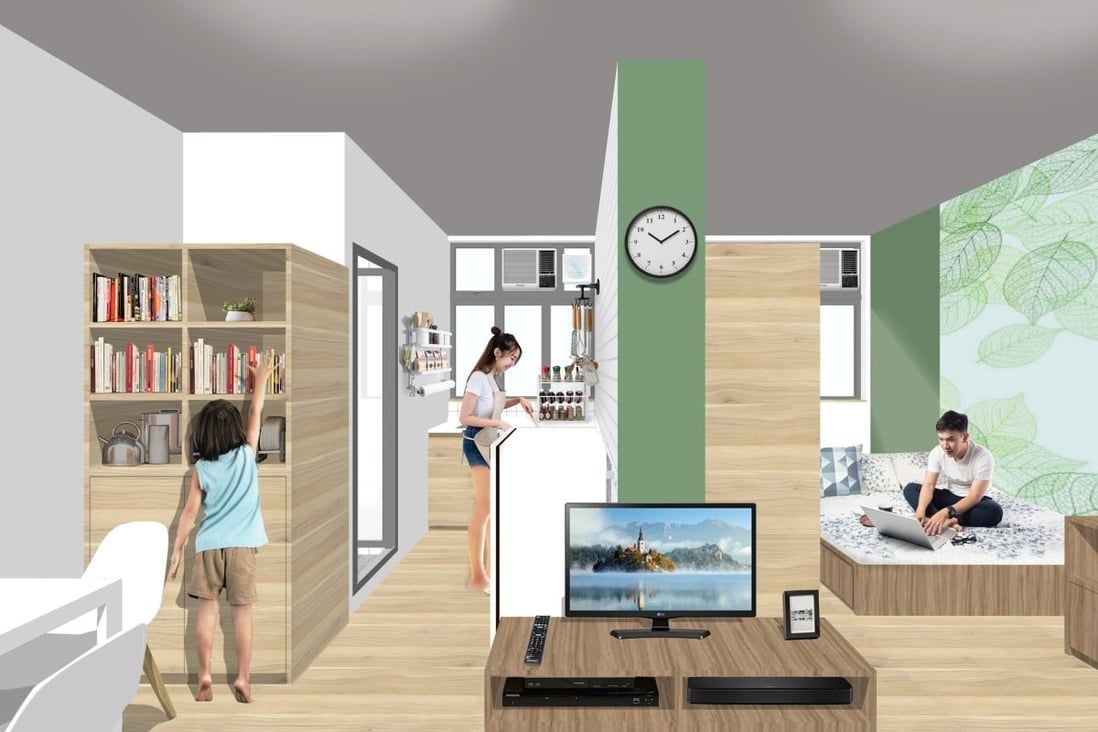 Preliminary designs for Hong Kong’s new temporary public housing that feature a family in a spacious flat with open-plan kitchen and bedrooms were revealed on Tuesday.

“Light public housing will provide self-contained toilets, kitchen, air conditioners and a water heater, Ho said in her post. “The specific layout of each flat will depend on the project, while residents can decorate the unit by themselves.”

The design draft showed a flat, big enough for a three-generational family, with several windows to maximise natural light and two air conditioners.

The cooking area was equipped with a sink, a food preparation space and an extractor fan.

The Architectural Services Department will build 30,000 temporary flats and aim to reduce the waiting time for public housing from six years to 4½ by 2026-27.

The new temporary accommodation will mean families waiting for the allocation of a permanent public housing flat will enjoy a better standard of living in the interim.

Anthony Chiu Kwok-wai, executive director of the Federation of Public Housing Estates, said the temporary flats had “better facilities” than permanent public units as traditional flats were unfurnished and had no air conditioner, exhaust fan or water heater installed.

“I think it is reasonable to equip temporary housing with these basic facilities as it is just a short term home for tenants,” Chiu explained. “They are not supposed to spend much on renovating their temporary shelter.”

He added the government might consider leaving the layout design of the flats to tenants to allow more flexibility.

The new-style temporary public flats, designed for people who have been on the housing waiting list for more than three years, will range from 107 to 333 sq ft.

Rents will be set at 90 per cent of the cost of new build public housing in the same district.

The temporary flats will be built using prefabricated modules from the Chinese mainland to speed up construction.

Vincent Ho Kui-yip, chairman of the building policy panel of the Hong Kong Institute of Surveyors explained larger flats to accommodate a range of family sizes could be created by joining modules together.

Ho added that the government plans to build 30,000 temporary flats on five to six sites meant each area of land had to be at least 200,000 sq ft to make the scheme cost effective and allow for elements of design flexibility.