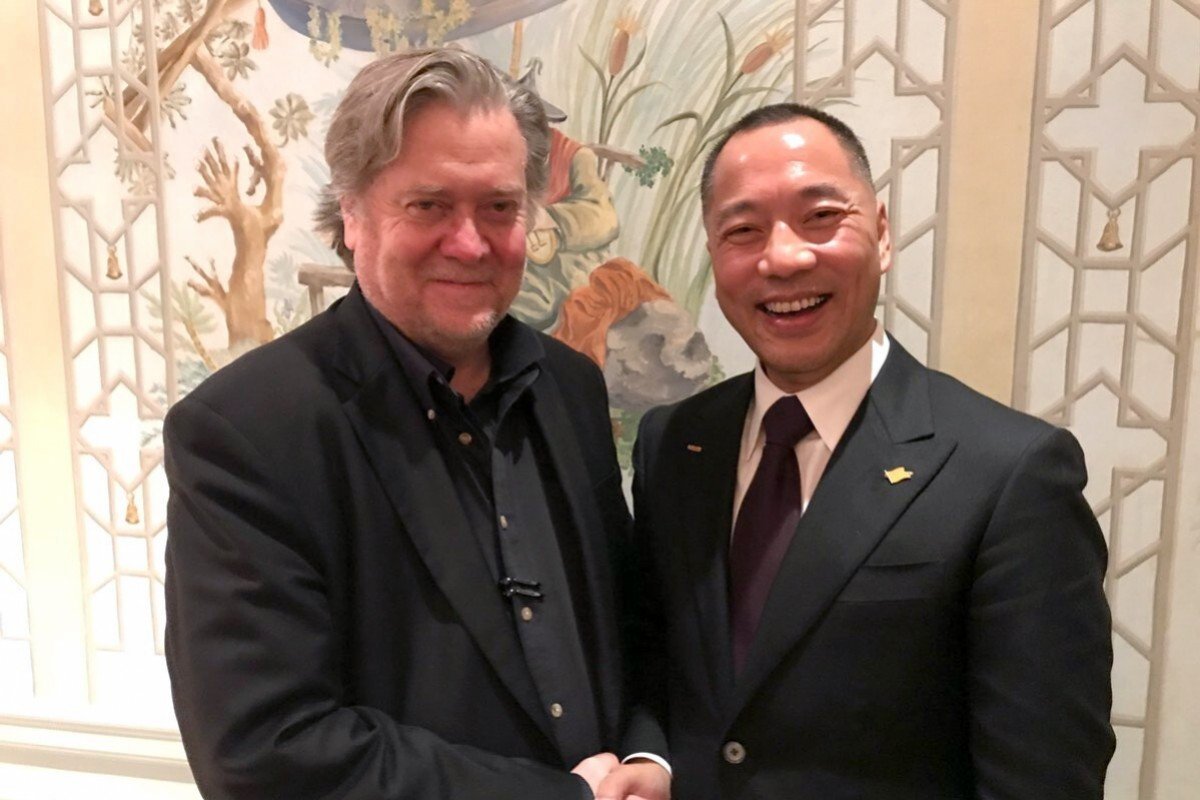 A foundation associated with fugitive Chinese tycoon Guo Wengui and former White House chief strategist Steve Bannon is linked to a non-peer-reviewed study that alleges the coronavirus is an artificial pathogen.

The Rule of Law Foundation’s name appears on the title page of the paper published on the Zenodo open-access research repository on Monday.

In the paper’s abstract, the researchers said the theory of a natural origin of the coronavirus “although widely accepted, lacks substantial support”.

“The alternative theory that the virus may have come from a research laboratory is, however, strictly censored on peer-reviewed scientific journals,” it said.

Coronavirus: A look inside China’s Wuhan Institute of Virology

The study’s first author is Yan Limeng, a former University of Hong Kong postdoctoral researcher who alleged in July that HKU silenced her when she claimed to have discovered early in the outbreak that the coronavirus could be transmitted between people.

Yan made the allegations on Fox News and claimed she made the discovery three weeks before the Chinese government confirmed human-to-human transmission of the coronavirus on January 20.

HKU has denied the allegations, saying that Yan did not conduct any research on the coronavirus in December or January.

The Rule of Law Foundation comprises two New York-based charities funded by a US$100 million donation from Guo in November 2018. According to Bannon, the foundation was created to help victims of Chinese government persecution.

Bannon has identified himself as chairman of the Rule of Law Society, one of the foundation’s constituent charities, which is also named on the paper’s title page.

Real estate tycoon Guo fled China in 2014 after learning an associate had been arrested on corruption charges. Based in New York, he has campaigned to topple the Chinese Communist Party, making a host of unverified allegations about party leaders.

Since leaving the White House in 2017, Bannon has appeared with Guo in dozens of videos attacking the party.

Last month, Bannon was arrested in Connecticut on Guo’s yacht on charges that he defrauded donors in a private fundraising effort.

On Monday, Yan said on Twitter that Zenodo was hacked after the paper was published. Yan’s Twitter account, which had almost 60,000 followers, was also suspended, although it is unclear why.

Three other scientists were listed as co-authors on the paper but the South China Morning Post could not find previous work by the researchers, all of whom appear to have Chinese names.

The researchers’ credentials were not included in the study, and there was no explanation of their links to the foundation or their role in the study.

There was no response to a request for comment sent to an email address listed on the paper.

China and the United States have traded barbs over the origin of the coronavirus.

Chinese diplomat Zhao Lijian, now the foreign ministry spokesman, suggested on Twitter in March that the virus could have escaped from a US military lab
and taken to the central Chinese city of Wuhan, where it was first detected.

Meanwhile US officials, including Secretary of State Mike Pompeo, have suggested that the pathogen could be traced back to a lab at the Wuhan Institute of Virology.

There is no publicly available evidence to back either claim and scientists have dismissed these theories.

An analysis in the journal Nature said the virus had none of the hallmarks of genetic engineering.

Yan’s paper said the Nature article was mired by “conflicts of interest” but did not give evidence to support the claims.

It also said the “genomic sequence of Sars-CoV-2 is suspiciously similar to that of a bat coronavirus discovered by military laboratories in the Third Military Medical University (Chongqing, China) and the Research Institute for Medicine of Nanjing Command (Nanjing, China)”.

Kristian Andersen, first co-author of the Nature article, said on Wednesday that many of the central claims in Yan’s paper were factually inaccurate.

Andersen said Sars-Cov-2, the official name of the coronavirus, was not “suspiciously similar” to the bat coronavirus Yan referred to.

“This simply can’t be true – there are more than 3,500 nucleotide differences between Sars-CoV-2 and these viruses,” he said.

“My lab has never received funding from China and we have no collaborations with Chinese investigators. I have no financial interests in China. All our analyses are scientific and unbiased,” he wrote.

Yan has become a frequent guest on right-leaning broadcasters and platforms. On Tuesday, she repeated many of the central allegations in the study on Fox News show Tucker Carlson Tonight, one of the most popular current affairs programmes on US cable television.

Yan also frequently appears on Bannon’s podcast, War Room, and in reports published by a media outlet owned by Guo, repeating her allegations that the virus is engineered.

Guo and Bannon have been among the most outspoken advocates of the theory that the coronavirus was a biological weapon created in China’s first biosafety level 4 lab at the Wuhan Institute of Virology.