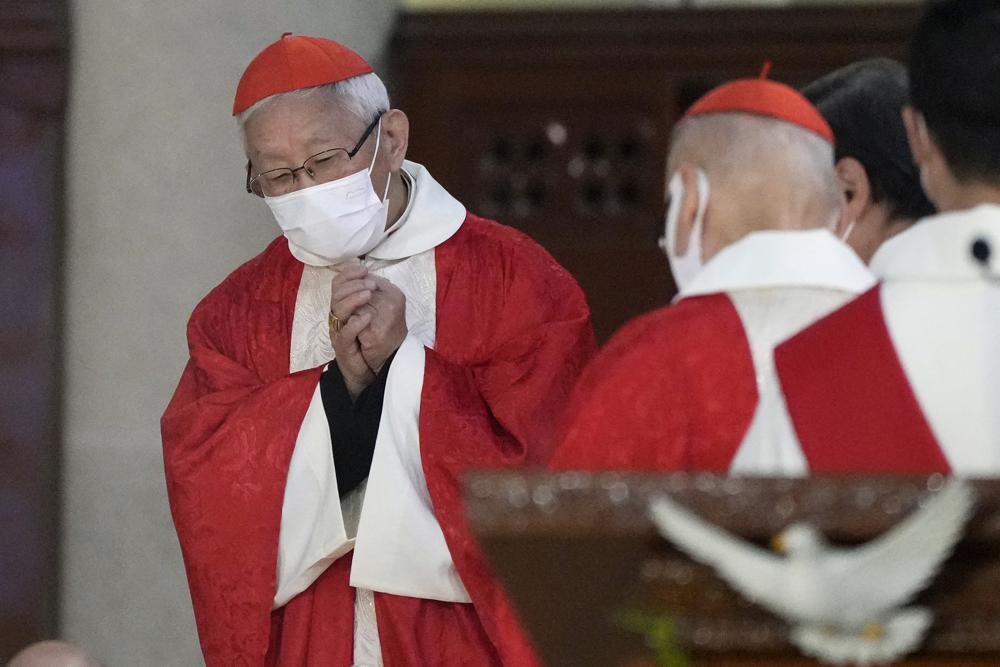 Cardinal Joseph Zen, the 90-year-old Catholic cleric arrested by Hong Kong police on national security charges, has long been a fiery critic of Beijing’s control of religion and political monopoly, along with efforts by the Vatican to reach a working arrangement with the ruling Communist Party.
Zen left a police station on bail Wednesday night following his arrest alongside other former trustees of the 612 Humanitarian Support Fund, which provides assistance to people arrested during 2019 anti-government protests. The former Hong Kong archbishop has not yet commented on his arrest.

A police statement said the former trustees were suspected of endangering national security by making requests of foreign countries or overseas agencies and calling for sanctions against Hong Kong.

Widely condemned abroad, the arrests further a campaign to quash all forms of dissent in the city under a sweeping national security law passed in 2020, a year after authorities subdued pro-democracy protests that challenged China’s rule over Hong Kong.

The crackdown is increasingly penetrating into the city’s long-respected economic, religious, and educational institutions, along with non-governmental organizations, many of which have closed down their Hong Kong operations. The city was promised that it could keep freedoms of speech, assembly, and judicial independence when it was handed over from Britain to China in 1997, but critics say Beijing has reneged on its guarantees.

China’s Foreign Ministry fired back at the criticism, with spokesperson Zhao Lijian saying, “We are firmly opposed to any act that denigrates the rule of law in Hong Kong and interferes in Hong Kong affairs.”

“Hong Kong is a law-based society, where no organization or individual is above the law, and all illegal acts will be punished by law,” Zhao told reporters at a daily briefing.

Separately, the ministry’s office in Hong Kong issued a statement saying that “safeguarding national security is justified, foreign interference is purely in vain.”

Zen had once sought to build bridges with China’s Communist Party-controlled Catholic church by visiting Beijing-approved seminaries in mainland China. But he also said those experiences showed him the lack of religious freedom in China and fed a deep distrust of the officially atheist ruling party.

China broke off relations with the Holy See in 1951 after the party took power and established its own church. Foreign priests were expelled and many of their Chinese colleagues spent decades in prison or labor camps.

In recent years, the Vatican, particularly under Pope Francis, has been eager to reach a deal with the Chinese government and unite the churches.

Zen was especially scathing of attempts by some in the Vatican to reach an arrangement with the party on the appointment of bishops on the mainland, a power traditionally wielded by the Holy See which Beijing claims for itself.

In 2018, he warned that a deal between the Vatican and China that cedes too much authority to Beijing would place the country’s Catholic followers in a big “birdcage.”

“The Communist government just wants the church to surrender, because they want complete control, not only of the Catholic Church but all the religions,” Zen said at the time.

A tacit agreement was reportedly reached in 2018 whereby China submitted names to the Vatican for approval, but that has had little perceptible impact on relations between the sides. Zen accused the Holy See of selling out underground Catholics who have remained loyal to the Vatican.

Zen, a frequent blogger, posted about making a desperate journey to Rome in a personal effort to prevent an underground bishop from being replaced by an excommunicated one favored by Beijing.

The Vatican spokesperson, Matteo Bruni, said Wednesday the Holy See “learned with concern the news of the arrest of Cardinal Zen and is following the evolution of the situation with extreme attention.”

The Hong Kong Catholic Diocese also issued a statement Thursday saying it was “extremely concerned” about Zen’s condition and safety.

“We have always upheld the rule of law. We trust that in the future we will continue enjoying religious freedom in Hong Kong under the Basic Law,” it said, referring to the city’s mini constitution.

Zen has outsized political clout in a city where Christians are a minority but many hold elite positions, particularly in government and education.

Born into a Catholic family in Shanghai in 1932, Zen left for Hong Kong, then a British colony, in 1948, a year before the Communist takeover of the mainland.

He adopted an activist role after he was appointed Hong Kong’s junior bishop in 1996, the year before Britain handed control of the city to Beijing. He frequently drew the wrath of China’s Communist leaders, who called him a “Vatican agent.”

Zen backed the city’s pro-democracy movement and was an outspoken critic of proposed anti-subversion legislation that officials were forced to shelve. He went on a three-day hunger strike to protest a government plan to curtail the influence of churches in publicly funded schools.

The junior bishop took over the Hong Kong diocese in 2002 and Pope Benedict XVI named him a cardinal in 2006, which he said signaled the pope’s focus on China. Zen retired from the Hong Kong post in 2009.

Also arrested Wednesday was singer-actress Denise Ho, who has become outspoken on a range of issues from the pro-democracy movement to LGBTQ rights.

Ho, a Canadian citizen, had earlier been banned in mainland China and lost her commercial endorsements after publicly supporting a 2014 push for expanded democratic rights known as the Umbrella Movement.

Ho was earlier arrested in December after police raided an independent online news site whose board she had formerly sat on and charged her with conspiracy to publish a seditious publication.
#Pope Francis
Add Comment