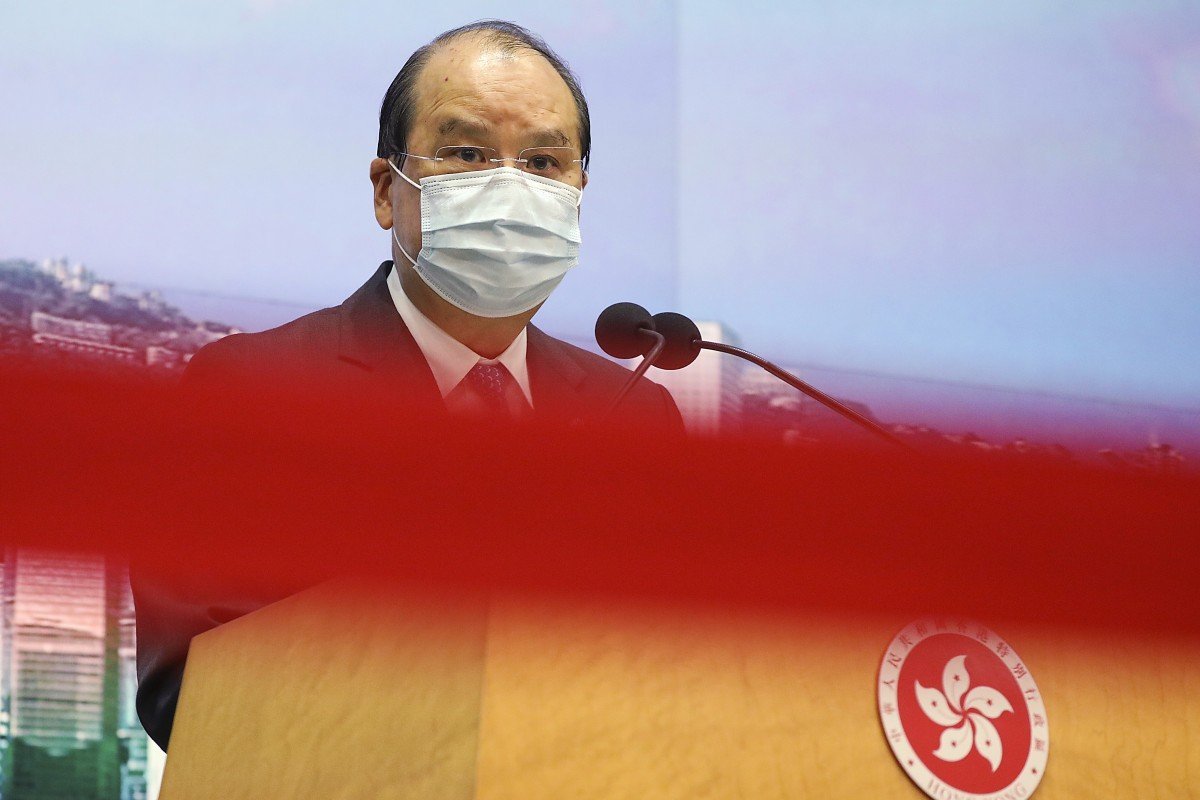 Unwise for the legislators to abandon their duty of monitoring the government, Matthew Cheung says.

Hong Kong’s No 2 official has hit out at opposition lawmakers who resigned en masse over a recent resolution by Beijing, saying it was “unwise and irresponsible” for them to abandon their duties of monitoring the government in the legislature.

The resolution, passed on Wednesday by China’s top legislative body, the National People’s Congress Standing Committee (NPCSC), resulted in the immediate disqualification of four legislators who had previously been barred from running for re-election. Fifteen pan-democrat colleagues quit en masse
on Thursday to protest against the decision. 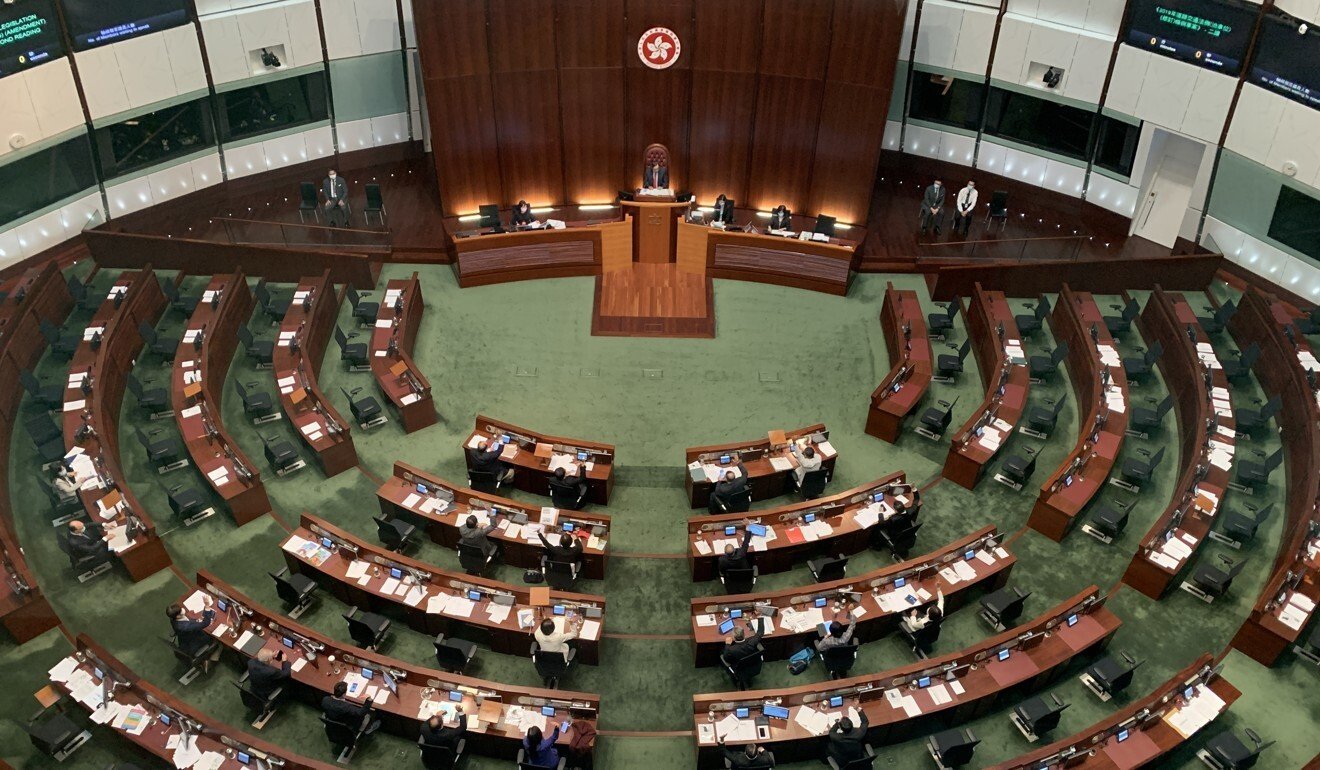 Empty seats in the Legislative Council after opposition lawmakers quit.

Writing on his official blog on Sunday, Cheung said: “It was unwise and irresponsible for the resigned non-establishment lawmakers to abandon their duties of monitoring the government and the opportunity to speak up in the Legislative Council.”

The standing committee’s decision, which allows for the summary ousting of lawmakers without the involvement of the courts or Legco, sparked backlash from local legal groups and the international community, with the European Union calling the action a “severe blow” to Hong Kong’s autonomy.

But Cheung, describing the resolution as “constitutional, legal and reasonable”, said Beijing’s move only targeted activities that would endanger national security, including by seeking foreign countries to impose sanctions against Hong Kong.

“[Beijing’s action] is by no means to exclude dissidents, or to suppress different voices,” he said.

Cheung also described as “nonsense” the criticisms that challenged the legal grounds of Beijing’s decisions.

The Hong Kong Bar Association has balked at the resolution’s bypassing of the existing constitutionally mandated method for removing lawmakers, while the opposition has said the expulsion of legislators was a step back for democracy and marked the end of the “one country, two systems” principle, referring to the policy that gives Hong Kong a high degree of autonomy.

“These people talked black into white, arbitrarily smeared and maliciously attacked the country,” the deputy leader wrote. “Their attempts to undermine and provoke the affection of Hong Kong people towards the country will not succeed.”

Democratic Party chairman Wu Chi-wai, one of the 15 lawmakers who resigned, insisted it was unconstitutional and a breach of the Basic Law for authorities to disqualify his colleagues without going through the city’s courts or legislature.

“The pan-democratic camp has the responsibility to resign en masse to express our outright rejection,” Wu said.

Maria Tam Wai-chu, vice-chairwoman of the Basic Law Committee, said on a TVB show on Sunday that the four unseated legislators – Alvin Yeung Ngok-kiu, Dennis Kwok, Kwok Ka-ki and Kenneth Leung – would not be eligible to run in the upcoming Legco election, which was slated for September next year. 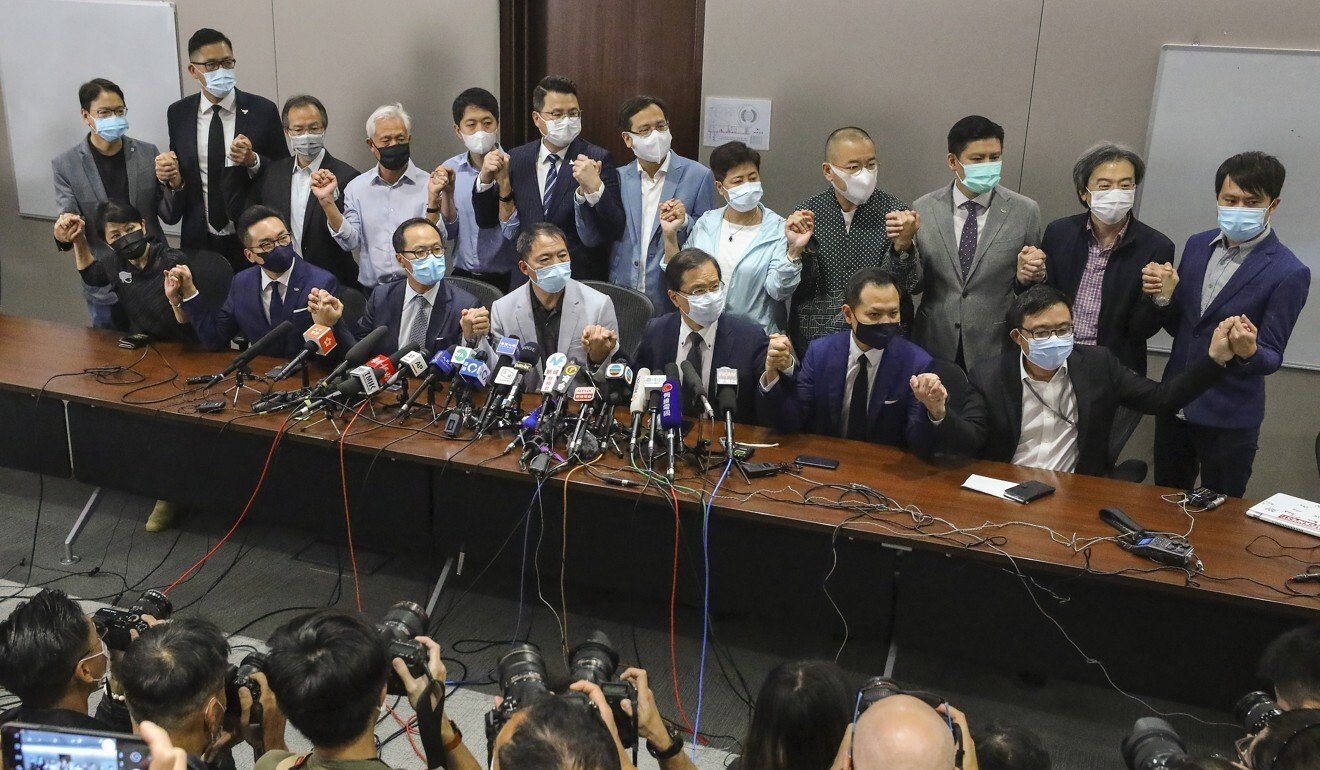 Pro-democracy lawmakers make a show of unity on Wednesday.

Tam said the “time is too short” for electoral officials to believe that they would genuinely bear allegiance to Hong Kong as a special administrative region of China.

But Fergus Leung Fong-wai, a localist district councillor who was also barred from standing in the upcoming Legco elections, said he believed that even if pro-democracy candidates make a declaration to abandon certain political beliefs when seeking seats in the future, they would still be disqualified by officials under the “arbitrary red line” drawn by Beijing.

Under Article 104 of the Basic Law, Hong Kong’s top officials, lawmakers and judges must swear to uphold the city’s mini-constitution and pledge allegiance to Hong Kong.

The NPCSC issued an interpretation of the article in 2016, specifying that a person shall bear legal responsibility if he or she refused to take the oath sincerely, or engaged in conduct in breach of the oath.

In a statement issued on Thursday, the Bar Association, which represents the city’s barristers, said Beijing’s decision and the disqualification of four pan-democrats violated the principle of “due process inherent in the rule of law”.

Asked to comment on the criticism, Maria Tam sidestepped the question and asked the public to think about the sanctions imposed on Hong Kong officials earlier by the US government instead.

“There are no mechanisms for [the Hong Kong officials] to appeal against the sanctions,” she asked.

“What’s the point of discussing the principle of due process [in Beijing’s decision]?”

Following the disqualifications, both the United States and Britain had warned of further sanctions against individuals in China.