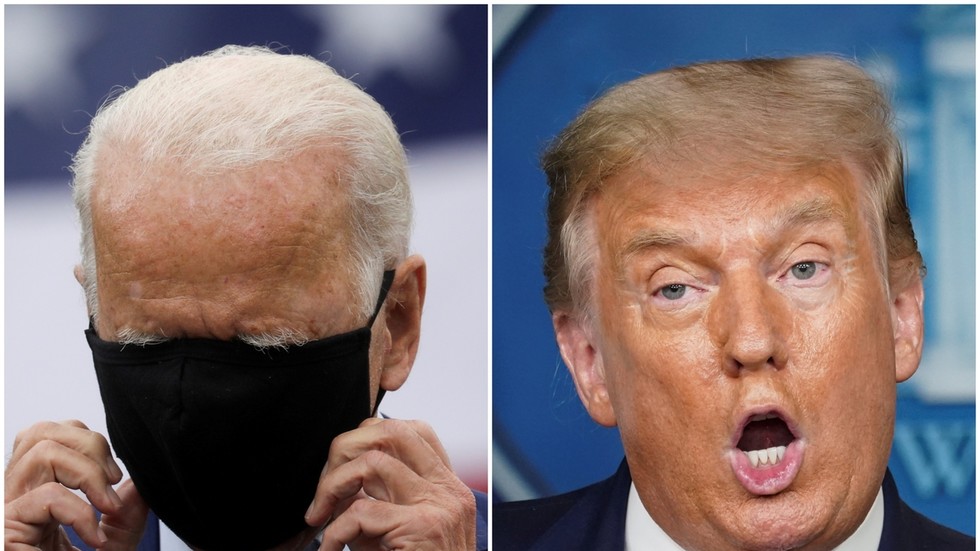 As US President Donald Trump and Democratic challenger Joe Biden accuse each other of being unfit for the job, voters in six swing states say they agree… with both of them. A poll reveals voters think neither is mentally fit.
Voters in the critical swing states of Florida, Michigan, Pennsylvania, North Carolina, Arizona, and Wisconsin doubt either Trump or Biden are fit to serve as commander-in-chief of the US, according to a poll conducted last weekend by CNBC and Change Research. Published on Thursday, the survey’s results raise questions about the wisdom of both parties running ever-more-aged candidates for the top office in the world’s most heavily armed superpower.

Some 55 percent of those surveyed viewed Trump as mentally unfit, while 52 percent argued Biden was not in control of his mental faculties. The candidates are 74 and 77 years of age respectively, meaning whoever wins will be the oldest president to enter the White House in US history.

Interestingly, a majority of poll respondents believed both politicians were physically fit to be president. Some 52 percent of voters in the swing states affirmed Trump was of sound body, compared to 54 percent who said the same of Biden.

Trump and his doctor have flatly denied claims he suffered “a series of mini-strokes” last year after the claim spread on social media earlier this month.

The rumors were fueled by a CNN report detailing an episode from a forthcoming book in which Vice-President Mike Pence was instructed to be “on standby” to take over as president, should something happen to Trump during a trip to Walter Reed hospital in November.

The president slammed the rumor as “fake news” and called for the cable network to fire an analyst who’d amplified it, accusing CNN of being “complicit in the smear campaign…to level the playing field against Joe Biden, somebody who truly has lost a step.”

Biden’s critics have argued that the former VP’s frequent, often-bizarre ‘gaffes’ and lapses into incoherence are a sign of incipient dementia. Trump has accused him of “hiding in the basement” and warned his campaign is a Trojan horse for full-on socialism, pointing to his reluctance to condemn the riots that have disrupted cities across the US.

While Biden’s supporters have chalked the oddities of speech up to a lifelong stutter and insisted his absence from the public eye is merely a precaution taken against the coronavirus, nearly half of Democrats surveyed in a poll last month believed he would not last for a full four-year term.

Trump’s enemies have long indulged fantasies of dislodging their bogeyman using the 25th Amendment to the Constitution, which provides for the removal of a president who is “unable to discharge the powers and duties of his office” due to physical or mental incapacitation. However, an effort to oust him on that basis has not been seriously attempted.

Biden boasts a slight lead over Trump in the six swing states polled as of Wednesday, though another poll found Trump supporters are remaining quiet about whom they plan to support on election day.
#Donald Trump  #Joe Biden  #Coronavirus

GEORGE L AUMAN 168 days ago
I live in NC, USA....one candidate is a sociopath with significant personality disorders and hopefully will no be reelected and the other candidate does not have these traits. I voted today

Oh ya 172 days ago
Well we know for sure slow joe is. He needs to spend his last years at home around family. God knows he has skimmed enough money from china to buy groceries. But the nutbars that support him hate Trump so bad they can not see its Shady Acres time. Someone needs to be charged with elder abuse in his case . I have met people here in panama that if you mention trump they start foaming at the mouth, turn beet red and go off on a rant. I truly believe that they should move back to the United States and change things there if they feel that strong
View all comments (2)Add comment