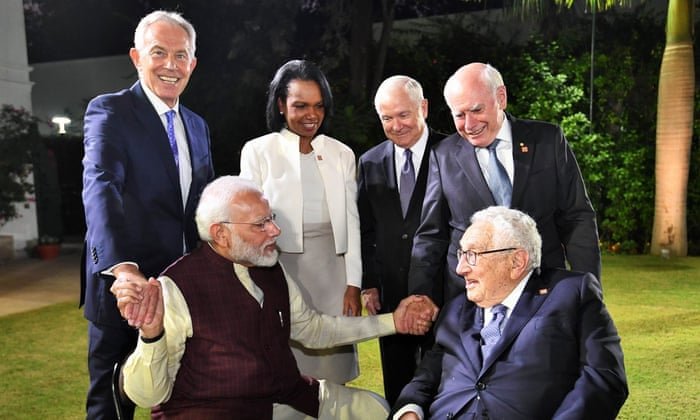 If the horsemen of the apocalypse ever hung up their riding boots, this could be a photo of the retirement party. Five men and a woman of very different backgrounds and different continents, brought together by an investment bank and shared history of mayhem.

The smiles and hand-holding in the group photo at the JP Morgan International Council in New Delhi are redolent of fond memories and fellow feeling. They have nearly a half-millennium between them, and no end of war stories to share, tales of pressing the buttons and pulling the levers behind some of major conflicts of modern times.

The dean of the bunch is sitting low in his seat on the right: Henry Kissinger, the 96-year-old living embodiment of cold war realpolitik with a wealth of foreign policy knowledge and major wars to his name, including the undeclared, illegal mass bombing of Cambodia.

Standing in the rear are three of the leading minds behind the 2003 Iraq invasion. With his trademark tan and grin, the former British prime minister Tony Blair is at the left, next to Condoleezza Rice, who was George Bush’s national security adviser at the time. Over to their right is John Howard who, as Australian leader at the time, sent his country’s troops into the fray.

The latter-day crusade in pursuit of Saddam Hussein’s non-existent weapons of mass destruction was one of the most disastrous mistakes in history, unleashing a cascade of violence that killed well over half a million people and ushered in an era of extreme violence in the Middle East that continues today.

The fact they are still feted as foreign policy sages suggests that once you reach a certain level in global diplomacy, you can only fail upwards.

In among the trio is Robert Gates, former CIA director and defence secretary, who sat the Iraq war out but as deputy director of the CIA did advocate a bombing campaign against Nicaragua.

At the centre and focal point of the little group is its newest member, Narendra Modi. The Indian prime minister is the only one among them still doing the day job, but may be being inducted early for moving troops into Kashmir, revoking its autonomous status and rounding up Muslims, even at the risk of nuclear war with Pakistan.

In the photo, Modi is the benign host, grasping hands with Blair and Howard, while gazing amicably at Kissinger, apparently forgiving the elder statesman for his determined support for the Pakistani dictatorship even though its army killed at least 300,000 mostly Hindu Bengalis in what is now Bangladesh and forced 10 million to flee to India. On the notorious Nixon tapes, Kissinger can be heard referring the Indians as “such bastards” and calling Indira Gandhi a “bitch”.

“If Modi wanted to get huffy, he would have material,” said Gary Bass, author of Blood Telegram, a book on the genocide and Nixon and Kissinger’s role in it.

There is no sign of huffiness at the JP Morgan bash. The fact that when Blair and Rice were in office, their governments imposed travel bans on Modi after anti-Muslim rioting killed a thousand people under his watch has also been consigned to the past.

It may be that once you rise to the top level of such grand strategy, it no longer matters what side you were on or who you killed. They all add to the mileage on your platinum card. To have taken part and come out the other side, prosperous and smiling, is enough.