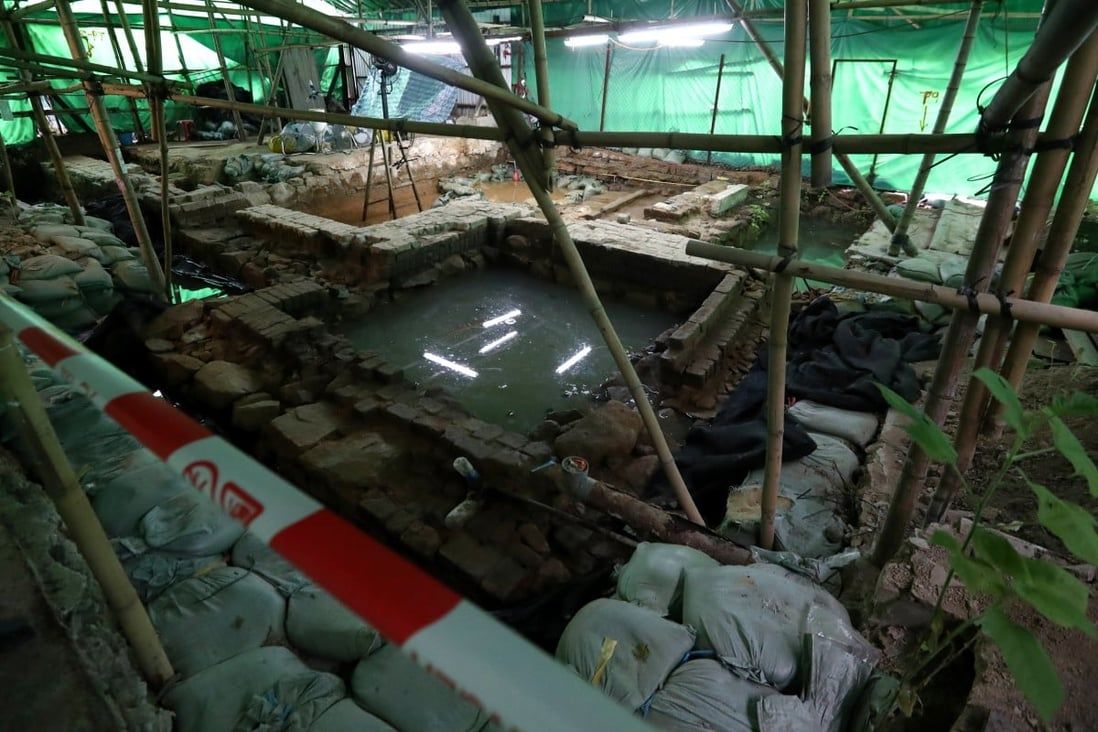 Discoveries prompt Urban Renewal Authority to expand conservation park it plans as part of project to build 750 flats by 40 per cent.

An excavation of a site where an 18th century walled village once stood in what is now downtown Hong Kong has uncovered tens of thousands of artefacts, including parts of a ceramic neck pillow, an inkwell, an opium canister, Japanese pottery and an ox cart.

The discoveries have prompted the Urban Renewal Authority (URA) to expand a conservation park it planned as part of a project to build 750 flats by 40 per cent and rethink the original layout of the residential blocks, two experts involved in the work have told the Post.

Nga Tsin Wai Tsuen in Wong Tai Sin was first established about 670 years ago, but was almost completely rebuilt in the 1700s. To protect against pirate raids, the villagers erected walls around the settlement’s walls and built watchtowers at each corner. 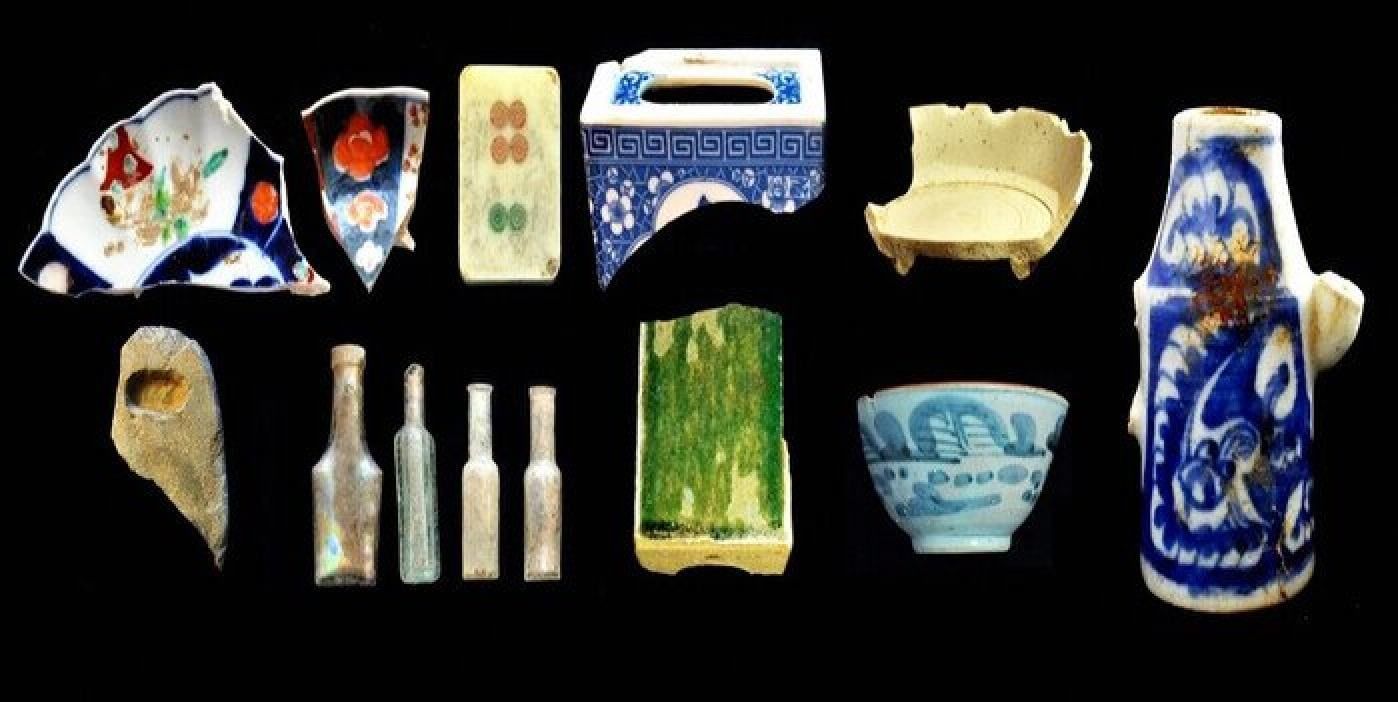 Some of the thousands of historical artefacts found by archaeologists at Nga Tsin Wai Tsuen village in Kowloon.
The six-year excavation found remnants of the watchtowers, the north and south walls, and a moat, archaeological expert Julie Van Den Bergh told the Post.

The project’s architectural consultant, Tony Lam Chung-wai, said the expanded park, which would include the watchtowers’ foundations and some of the village wall remains, could present a sense of wai, Cantonese for “to encircle”.

“The four corner watchtowers can vividly show the encirclement,” Lam said. “The public will also be able to know how long these village walls are by walking along them.” 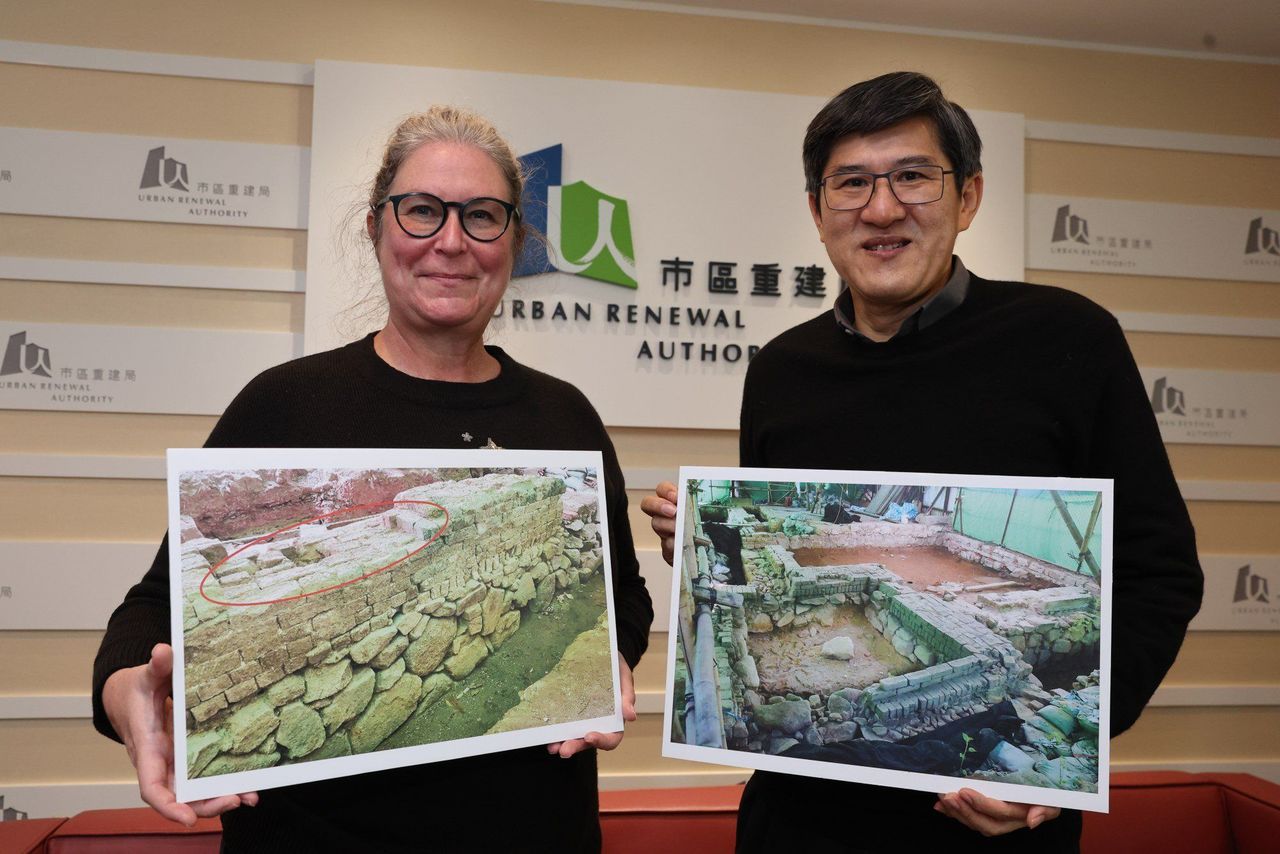 Julie Van Den Bergh and Tony Lam with images of some of the archaeological finds at Nga Tsin Wai Tsuen village in Kowloon.

The URA’s latest proposal calls for a park that extends across 21,500 sq ft of the roughly 50,000 sq ft site. Construction of the 750 flats is due to begin in the middle of next year after the government approved a detailed development plan and conservation proposal.

Members of the public would be able to enter the park through the village gatehouse and walk along the central axis to visit eight reconstructed homes, complete with artefacts, designed to show the daily life of villagers. It is hoped the park will be open to the public by 2030.

A plaza will be built in front of the village’s Tin Hau Temple for people to hold a Da Jiu festival, organised once a decade to pray for peace. 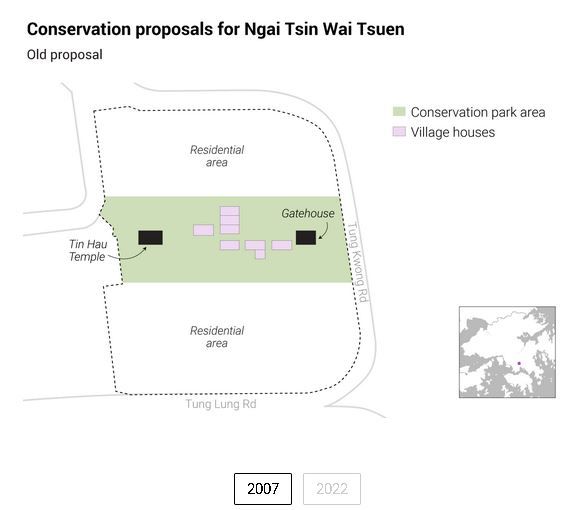 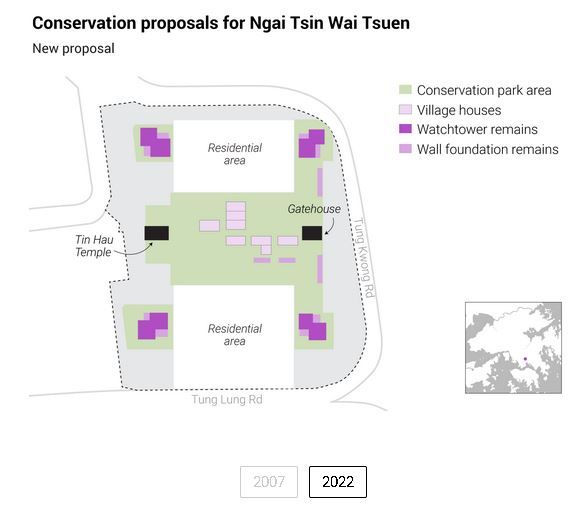 The URA will also apply for an exemption from a requirement to build a car park to minimise construction at the site.

Van Den Bergh explained that Nga Tsin Wai Tsuen formed a “defence league” with nearby settlements along the original Kowloon Bay shoreline, and infrastructure such as the Lung Tsun Stone Bridge, a pier built in the Qing dynasty between 1873 and 1875 to service customs vessels.

She also noted the nearby Kowloon Walled City, once a garrison town for soldiers, officials and their families in the 19th century.

She added that the finds at Nga Tsin Wai Tsuen had also shed light on walled village settlements in the New Territories, most of which remained occupied, which made excavation work almost impossible.

Van Den Bergh said she imagined the inhabitants of Nga Tsin Wai Tsuen, along the original shoreline of Kowloon Bay, were well-off in comparison with others in the 18th century.

“It was very much an agricultural community, so their income was from the market produce that they could sell quite close by,” she said.

The development site was first identified in 1998 by the Land Development Corporation, the predecessor of the URA. In 2008, the URA entered into a joint venture agreement with Cheung Kong Property Holdings, now CK Asset Holdings, to build the residential blocks and conservation park by 2023-24. The company acquired about 70 per cent of the property interests in the village.

But the Conservancy Association accused the URA of failing to properly inform the public about its findings at the site, noting its archaeological research report public has not been made public.

“It is the city’s last urban walled village. The authority should release more information or even conduct another round of public consultation,” Peter Lee Siu-man, the association’s senior campaign manager, said. “It gives a bad impression to the public.”

Lee added he also had concerns about the conservation park, which he said might become a “private clubhouse” as rules could be imposed to prevent the public from enjoying the area.

He said pressure could also be brought to bear by residents in the flats to stop people from organising festivals.