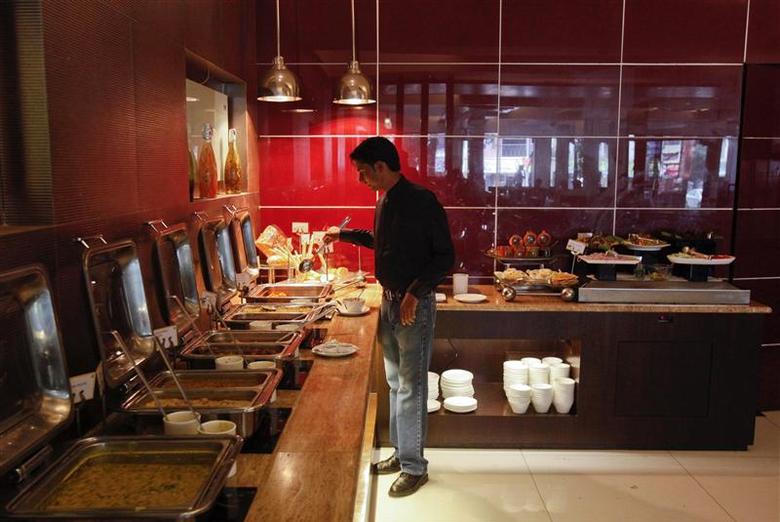 With a tantalizing array of satay chicken, wok-fried mud crab and chilled tiger prawns, the dinner buffet at Singapore’s Grand Hyatt hotel typically sets diners back about $70. Those on a tighter budget and with an eye on sustainability can fill a box for a 10th of that price.
Across Asia, tech startups are taking food otherwise destined for landfill and providing discounted meals through mobile phone apps.

About a third of food is lost or wasted every year globally, and the mountains of waste are estimated to cause 8-10% of greenhouse gas emissions such as methane, the United Nations says. The Asia-Pacific region is among the worst in the world for food waste, accounting for more than half of food squandered globally.

“A common mantra that I have is that being sustainable should be attainable,” said Preston Wong, chief executive officer and co-founder of treatsure, which collaborates with chains including the Hyatt,Accor Group and the Singapore Marriott Tang Plaza Hotel to allow app users to pick out and collect a “buffet-in-a-box” of food that would otherwise be thrown out. “I think technology can bridge that gap,” he said.

With more than 30,000 users, treatsure has saved an estimated 30 metric tons of food from going to waste since it launched in 2017, with users typically having to wait until the end of service before they can collect their food, according to Wong. Still, that’s a far cry from the 817,000 tons of food waste in Singapore in 2021, a 23% increase from the year prior. Authorities say the city state’s only landfill, Semakau, is expected to meet Singapore’s solid waste disposal needs up to 2035 and beyond.

Hong Kong faces similar problems. It has already filled up 13 landfills, and about 3,300 tons of food waste per day were dumped in its remaining sites in 2020, according to Hong Kong’s Environmental Protection Department.

“The space is very limited,” said Anne-Claire Beraud, Hong Kong country manager of Phenix by OnTheList, an app launched in the territory last year. “Everything is very dense so there isn’t a lot of space to treat all this waste.”

The app allows users to pick up a “Mystery Basket” of food at stores including Pret A Manger and local cake shop The Cakery for a minimum 50% discount.

So farit’s sold 25,000 baskets, with each equating to about 1 kilogram of food saved from going to wasteand 4.5 kilograms of CO2 emissions avoided, the company says.

Phenix’s original platform was launched in France in 2014 and expanded to four other European countries where it’s saved 150 million meals. It collaborated with OnTheList, a flash-sale company, to bring the app to Asia.

The concept of food sustainability is still in its infancy in Asia, compared with North America and Europe where authorities are cracking down. France has already banned supermarkets from throwing away unsold food, and Spain recently drafted legislation to tackle waste by fining companies. US states including California and New Jersey have laws to reduce the amount of food going to landfills.

That’s boosted the popularity of apps likeToo Good To Go, which was launched in Denmark in 2016 and now operates in 17 countries including the US, Canada and the UK. It has has provided more than 152 million meals through its so-called Magic Bags, which are sold at a discount by shops and restaurants at the end of the day with items that would otherwise have been thrown out.

In a region as culturally diverse as Asia, smaller local startups are getting a foothold catering to their home market.

Companies “have to match that region’s culture and habits,” said Taichi Isaku, co-founder and chief product officer of CoCooking, which created the Tabete food-rescue app in Japan. “It’s an area that has to be nurtured in order to successfully introduce new technologies.”

Tess Kermode, director of international expansion at UK-based Olio, agrees that companies need to “understand the culture and the people in a particular market.”

The firm operates in 62 countries including India, Sri Lanka, Nepal, Thailand and the Philippines. The app is mostly community based with neighbors posting free food to be picked up from their homes. So-called Food Waste Heroes also collect surplus produce from businesses and bring it home to list.

Olio says the app has helped save almost 58 million portions of food worldwide. Its largest international market is Singapore, where it has over 125,000 users and a formal partnership with foodpanda’s online market. The firm has ambitions to expand but, like other apps, says a lack of awareness of food sustainability in Asia is currently a handbrake on growth.

“Consumer-facing technology such as applications on personal devices can be very useful,” said Anthony Bennett, senior food systems officer for the UN Food and Agriculture Organization in the Asia-Pacific.

“However, this topic should be considered along with increasing the overall food literacy for consumers.”
Some apps, including treatsure and Tabete, are taking such matters into their own hands and trying to educate users with tips on reducing food waste and recipes on their social media pages.

“In North America and Europe, there’s been some maturity in understanding such challenges and tackling them,” said treatsure’s Wong. “But in Asia, this narrative has just begun.”
Add Comment