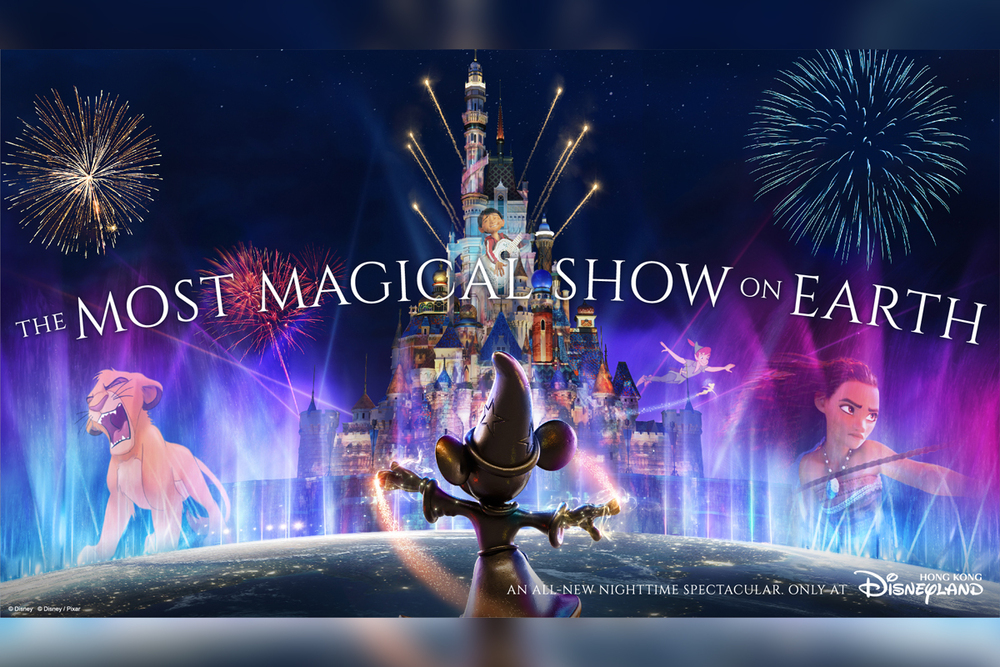 Since its debut in June 2022, “Momentous”, the much-anticipated brand-new nighttime spectacular at Hong Kong Disneyland Resort (HKDL) has continued to wow audience, young and old. Transcending the lives of different characters through classic Disney music and projection images of approximately 150 Disney and Pixar characters, the fascinating show brings a multi-sensory experience to guests, inspiring them to celebrate the different stages of life and cherish being together with loved ones.
“Momentous” as the Most Magical Show on Earth has been a roaring success as the show delights guests’ senses night after night with its eye-opening multimedia elements, including large- scale projection mapping, water projections, theatrical lighting, lasers, choreographed water fountains, flames, pyrotechnics, and firework effects.

Behind the scene, the successful delivery of the show depends on teamwork and contributions of the talented local and international cast members of Disney who began working on this project back when the new castle wasn’t even in existence five years ago.

The technical team plays a vital role especially in ensuring that the special effects are performing perfectly in the show. According to Gary Yiu, HKDL’s Supervising Technical Manager - Operations, the team members are responsible not only for the multimedia elements like projection mapping, water projections, theatrical lighting, lasers, choreographed water fountains, flames, pyrotechnics, firework, but also programming, arranging rehearsals and maintenance, allowing the show to run smoothly in compliance with safety regulations.

Normally, the U.S. team is responsible for the setup of large-scale performances, but the pandemic has got in the way, so the local team has shouldered the installation and rehearsals of the entire show. “But the show must go on!” he remarks. “It is a strong motivation for us to rise to the occasion. I am thankful to all my colleagues for the professional team spirit they have exhibited, as everyone strives hard and go that extra mile to get the show on the road.” He describes “Momentous” as ‘unprecedented’. Although there used to be many large-scale performances with fireworks and music in Hong Kong, none of these are comparable to “Momentous”.

Music is another crucial element of the show. HKDL’s Music Director Ceejay Javier believes that music is the soul that ties in the entire show together. The musical elements help tell the story more effectively, and also induce the emotional involvement of the audience.

“The show explores different stages of life through Disney’s classic animations and characters,” he notes. “In order to connect the music with the show, it took a lot of effort to select works that fit the theme of ‘life’ among the many Disney tunes.”

He explains that even though some of the same songs appear in different Disney shows, the production team has rearranged the music so that the audience can recognize the familiar melodies while finding freshness in them at the same time.

“For me, the greatest thing about ‘Momentous’ is that everyone can relate to the show as it is like reliving the moments of happiness and sadness of meetings and partings in life,” he adds. “Everyone will feel it differently depending on their own personal memories. Like me, I like the scene of Coco and the song ‘Remember Me’ the most as it recalled my memory with my grandmother.”

For the show to succeed, Virginia Sung, HKDL’s Senior Manager of Show Operations, believes that coordination between different departments are crucial “There are a number of things we need to attend to in the two hours prior to the show, like running tests, communicating with different teams, ensuring the smooth operations, and executing any contingency plans according to the situation and weather of the day,” she elaborates.

Virginia underscores the importance of flexibility for the Operation team as they have to deal with unexpected circumstances that may arise out of the blue. “In the event of an emergency, we will take stock of the situation and follow pre-established procedures to come up with contingency plans in co-ordination with various departments.”

Fiona Yu, who has taken part in different performances in HKDL, is the local team’s Production Director of “Momentous”. She applauds the hard work of each and every team member: “The preparation of the show has been an arduous journey, but the team has managed to gather the essence of many Disney classics, while the music and projected images are well-connected alongside the multimedia effects.”

?She highlights the ‘Afterglow Moment’ in “Momentous” as it has been specially arranged by the local team for the guests to reminisce on the show. “We hope to keep the energy of “Momentous” in the Castle after the show and extend it to Main Street, U.S.A., so that guests have enough time and space to ponder and think about the message behind the show.”

Fiona agrees that the most exciting thing about the show is that it resonates with everyone. “Launching this year, the show carries a special meaning as it echoes how we go through life these days,” she says. “Since the pandemic has somehow freed us from the usual fast pace of life, it seems to remind us to slow down and cherish the most basic and beautiful things in life.”

Fiona added that apart from “Momentous”, HKDL has different shows and performances that attract many local talents with diverse expertise to join the team. Since opening in 2005, HKDL has become one of the most popular employer among young people and provided fertile soil for grooming multi-generations of professionals in Creative, Entertainment and Hospitality industries for Hong Kong.
Add Comment