In the world’s big financial centers — from New York to Toronto to London to Sydney — rents for inner-city apartments are plunging.

International students who normally bolster demand are stuck at home and young renters — the most mobile group in real estate — are finding fewer reasons to pay a premium to live in what is, for now, no longer the center of things.

With remote working in vogue for everyone from banks to tech companies, and the quirky shops and bars that made living in a city fun curtailed, the equation about where to live is changing. And so is the balance of power between landlords and tenants.

Christine Chung, 26, is one of those taking advantage. She just managed to negotiate a 9% drop in rent for the house she shares with three others in Sydney’s trendy Enmore neighborhood about 10 kilometers (6.2 miles) from the city center. It wasn’t easy — the property agent spent the best part of five weeks dodging calls — before the landlord agreed to reduce the rent from A$895 ($638) a week to A$810. Rents are normally quoted in weekly terms in Australia.

“I’ll push for another rent reduction at the end of the lease,’’ Chung said. “The market has changed.”

Step out into the leafy suburbs and it’s a different story. Well-off professionals betting they’ll never have to be in the office full time again are willing to trade a longer commute for more space and larger gardens. Prices there are rising despite the looming global recession.

In Westchester County — a region north of New York with more than 20,000 acres of parkland — purchase prices for single-family homes have surged 16% from a year ago.

By contrast, Manhattan apartments are the cheapest they've been since 2013. Listings have tripled from a year ago while the median rent has tumbled 11%, with even bigger declines for studios.

With offices still barely populated and entertainment limited — Broadway venues are set to stay closed until May — the city’s costliest borough is losing some of its allure.

M. Christine Boyer, a professor of urbanism at Princeton University and a landlord herself, says she’s noticed the change.

“Maybe the drop in prices will bring a more equitable distribution in housing,” Boyer said. Even so, she expects the city’s appeal to endure. “We love cities, we love to congregate.” 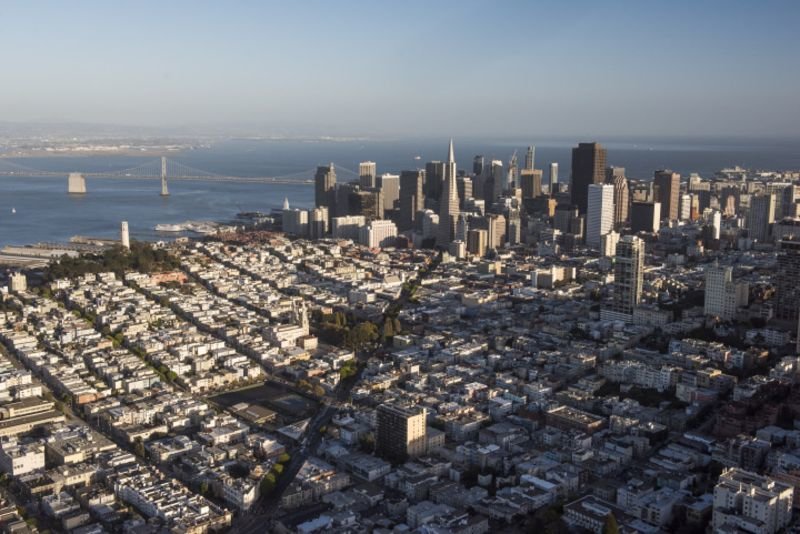 The skyline of downtown San Francisco.

Few places exemplify the tension between cities as magnets for the ambitious young and sky-rocketing prices better than San Francisco and the Bay Area.

Even as the region has minted millionaires, it’s also spawned a housing crisis that has forced some Silicon Valley workers to live in rented RVs parked on city streets.

Now with tech firms telling staff they should expect to work remotely well into next year — and may even be able to do so permanently — rents are falling fast.

The median monthly rent for a studio in San Francisco tumbled 31% in September from a year earlier to $2,285, compared with a 0.5% decline nationally, according to data released by Realtor.com.

In downtown Toronto, home to the second-largest financial center in North America behind New York, apartments are piling up.

Rents have plunged, down 14.5% in the third quarter compared with the same period last year, according to data from research firm Urbanation Inc. Properties are also sitting on the market for longer — 26 days in August compared with 14 a year earlier.

The halt to immigration and urban dwellers’ desire for more space to ride out the pandemic has put a dent in demand. On the supply side, a flurry of new completions and Airbnb operators shifting to longer term leases have also pushed more inventory onto the market.

While resale prices are still above where they were last year, brokers are starting to report some investors are dumping units below market value in an effort to get sales done right away before an anticipated slump.

A glut of condos for sale is building up in Toronto's glitzy downtown By contrast, prices for detached homes for Toronto as a whole are up 13% on the year. 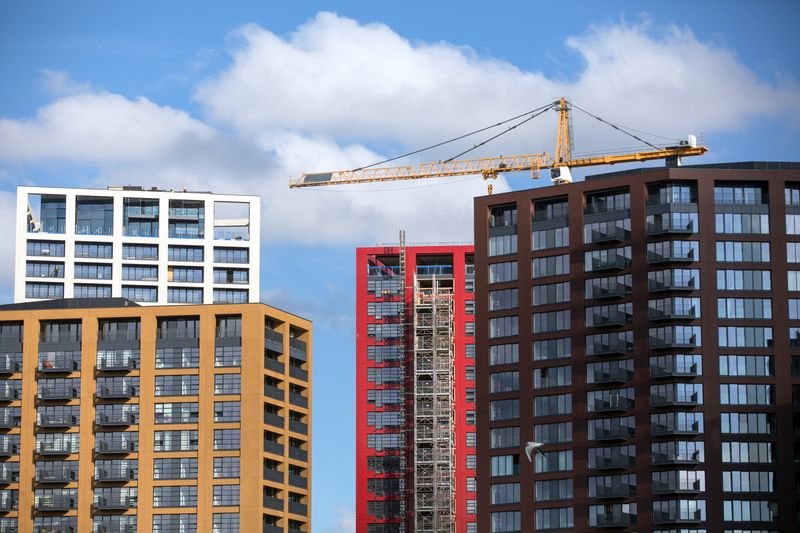 A crane stands above residential apartment blocks in London.

In London, declines in international students and the number of well-paid overseas executives seeking temporary homes in the city after Brexit are pushing down rents at the top end.

In the capital’s wealthiest areas, rents slumped 8.1% in the year through September, the steepest drop in more than a decade, according to broker Knight Frank.

The ripples are being felt down the ladder as well, with London the only region of the country where tenant demand is falling, according to a survey last month by the Royal Institution of Chartered Surveyors. Nearly seven out of 10 respondents expect rents in London will fall over the next three months.

In Singapore, an island that’s only 50 kilometers wide and smaller than New York City, the drop in rental volumes isn’t so much about people moving farther out. It’s more about them moving away.

Much of the demand for central rental units in the city state comes from expatriates, who find leasing a cheaper option than buying because of hefty stamp duties levied on foreigners. Now Covid-19 has taken the sheen off many elements of expat life in Asia, with family and friends now seeming very far away and once-frequent travel around the region curtailed.

Singapore is also facing its worst recession in history and the government is putting pressure on firms to hire locally.

Despite a notable bounce in activity as some of the border restrictions eased, rental volumes of private units were down 8% from a year ago, according to data from real estate portal SRX Property. Rents are 17% lower than their peak in 2013. By contrast, home sales are at the highest level in more than two years.

A growing number of tenants are opting for shorter leases so that they can move quickly if they a find cheaper apartment, said Christine Sun, head of research and consultancy at OrangeTee & Tie. 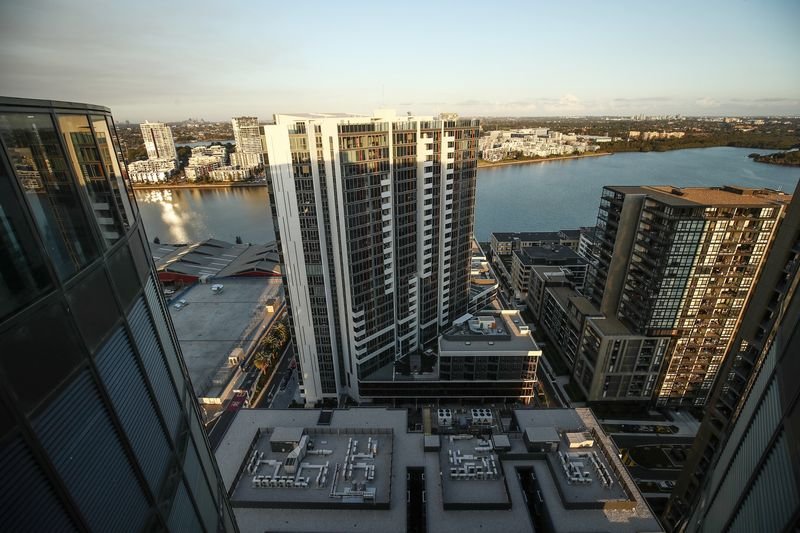 In Australia’s financial capital, daily new virus cases can be counted on your fingers and the beaches are bustling as summer nears.

While the changes aren’t as dramatic as in some cities, things have shifted. Rents are falling in the city while bidding wars erupt in the suburbs.

Yet the market also shows the powerful attraction cities have. Vacancy rates in the central business district, which spiked to a record high of 16% in May, according to SQM Research, have stabilized around 13% compared with around 5% pre-pandemic. Closed borders and the absence of international students are weighing heavily on demand.

What happens next to the world’s major cities is an open question.

For these sorts of price drops to translate into affordability improvements — something politicians everywhere have repeatedly failed to achieve — will depend on what happens on the other side of the ledger.

“You can’t forget income,” Chris Martin, senior research fellow at the City Futures Research Centre in Sydney, said. “The crisis has changed the ground under the economy.”

Corporate owners may also choose to sit on vacant properties while waiting for the market to return, Paul Chatterton, professor of Urban Futures at the University of Leeds, said, while noting there is a real opportunity to convert under-utilized apartments into more diverse spaces.

Given the signs suburban living and home working are increasing, city governments should focus on the core cultural, artistic and political functions of cities, according to Chatterton. “They've really got to find their feet in other directions.”

Though you won’t find many predicting radical de-urbanization.

“History tells us cities can be remarkably resilient,” said Christian A. Nygaard, a researcher in social economics at Swinburne University of Technology. For example, in Japan, changes to population distribution as a result of the bombing of Hiroshima and Nagasaki in 1945 had disappeared by the early 1960s. “Covid doesn’t evaporate all the investment that has gone into the central parts of our cities.”

One group to keep a close eye on, Nygaard says, is international students. Their choices if and when they are able to return will be one litmus test as to whether demand really is shifting for good.