OpEd: The Anti-Mask Law for Protesters is an Illegal Law

Law should not be only right, but also smart. Controversial laws it's exactly the problem and not the solution.

The human right to protect one's body from harmful tear gas and surveillance is an integral part of the supreme freedom to peacefully protest. The government’s right to be able to restore peace and order is never in question. But new laws and limitations for Hong Kong it's part of the problem, not the solution. Obviously It will create more anger than the safety it meant to bring.

A government should not eliminate the human rights of 2 million peaceful protesters to protect one's body from harmful tear gas and surveillance just because there are among them a few thousand hooligans, criminals or terrorists - call them whatever you want.

The police have the full right - and obligation - to use reasonable force to defeat every protester who resorts to violence. That is exactly their job.

But the same police have the same right -and obligation- to protect the protesters from a government that attempts to eliminate the human rights of millions of people to protest peacefully, in order to make their job of law enforcement easier.

This law is not only crossing the inviolable line of human rights to protect one's body from harmful tear gas and surveillance - but even if you think this law is right - it is not smart.

Controversial law is what started the problem and should not be played again as the solution. It should never come to life.

Not because we support the violence protests. Opposite: I think the Hong Kong Police should get much more confidence to crack down the criminals that destroy Hong Kong with bombs and fire and violence - by all means. But do not throw the baby out with the bathwater. Do not impose laws that will make more people crazy. Do not limit the ability of the young and angry people to protest properly and peacefully.

Do not criminalize the citizens that angry but do not cross the line and do not use violence. They are the majority of these protests, and if you push them too much - you will lose the respect all the people have to the law. Many leaders try to do this mistake in the past, but they never win. Not in the Arab Spring, not in Berlin, not in USSR, not in what was British America, and... not in China 70 years ego when Mao came and lead the revolution that made China great again. Those who do not learn history are doomed to repeat it.

Hong Kong's civil war is creating a lot of challenges, not less for the government than for the protestors.

So far, Hong Kong (and obviously China) has tolerated - amazingly, surprisingly - a huge number of illegal actions carried out repeatedly by some protesters, at a level far above what would be allowed in any other country. If these violent acts had happened in the USA or the UK, or anywhere else for that matter, then a tally of 1,000 dead protesters shot by police would be a very optimistic estimate. A death toll that would no doubt be applauded by the mainstream media as "winning the war against terrorism".

The salient fact - an amazing, surprising fact - is that the extreme violence perpetrated by some protesters and the remarkable tolerance of the authorities shows that not only Hong Kong but also China (yes, China!) has allowed its people far greater freedom of speech than would any Western country.

Of course, neither should we totally ignore the incontrovertible video evidence of several and more then just few instances of illegal violence against the protesters by very few criminals from the Hong Kong Police.

Right now, the most important and urgent challenge is not to point fingers but to find a peaceful solution, so as to relax the situation in a way that each side can forgive the wrongs done against them and move forward for the benefit of all Hong Kong.

The outlandish behavior of the extreme minority does not obscure the fact that as many as two million good, smart, well-educated, modern and loyal citizens of Hong Kong are angry, frustrated, and panicking - not just about their current lives, but about their future, and about the country they were born in and are proud to belong to.

Those decent and law-abiding people have the full right to protest, without being threatened or deterred by tear gas, labeled by face recognition technology,  or any other draconian measures.

In the light of the extreme violence and criminality -actually terrorism- of SOME of the protestors, the ban imposed by the authorities against peaceful protests is perfectly understandable. But everything that is right is smart.

Given the choice, obviously no government would really want to allow mass protests. But every citizen has the supreme right to make their voices heard, regardless of the natural desire of governments to keep enjoying the status quo and to keep ignoring the big, deep and wide social problems that Hong Kong have, regardless the extradition bill, lack of democracy, or Mainland China controls.

Hong Kong's situation is bad enough as it is. Going forward, any mistake that crosses the line - by government, police or protesters - might escalate the situation to a tragic and irreversible point.

At such a sensitive juncture, a wise government should not attempt to impose laws and orders that will obviously be broken by the masses.

Hasty and ill-thought out legislation will not prevent protesters from protecting themselves with gas masks, but will instead destroy respect for law and order in general. If reactive and repressive new laws don't make sense - and should be rightfully broken - who can guarantee that the rest of the laws will remain holy?

The need to use facial recognition technology to identify and classify protesters is understandable. Everybody wants to know everything about the others and love to protect its own secrets.

Equally, the protesters would love to have the ability to identify with face recognition and to separate out from the world-renowned and generally excellent Kong Kong Police Force the few but bad criminal policemen who have used unnecessary violence against protesters, and to have them punished properly.

But there is a fine, fine line that no one should cross:

And, no matter how terrible the conflict or how bad the situation, they must never forget the difference between the right to use power and the wrong to abuse power.

The Anti-mask law is a clear abuse of power and is illegitimately exposing the peaceful protesters to illegal tear gas and illegal surveillance.

To repeat - and let's never forget it - the peaceful protesters have rights that are above any law: human rights.

One of these rights is not to be labelled and categorized in the same pack as the criminal and terrorist protesters. At the end of the day, the decent, peaceful and angry protesters know very well that the violence of the extremists is not part of the Hong Kong they want, whereas the good old Hong Kong Police is exactly what they want, as soon as life gets back to normal.

The fact that some other Western countries have this law doesn't make it right. Hong Kong should cherry pick the best examples from every country, and not inflict on its people the bad laws that regrettably every good country also has. 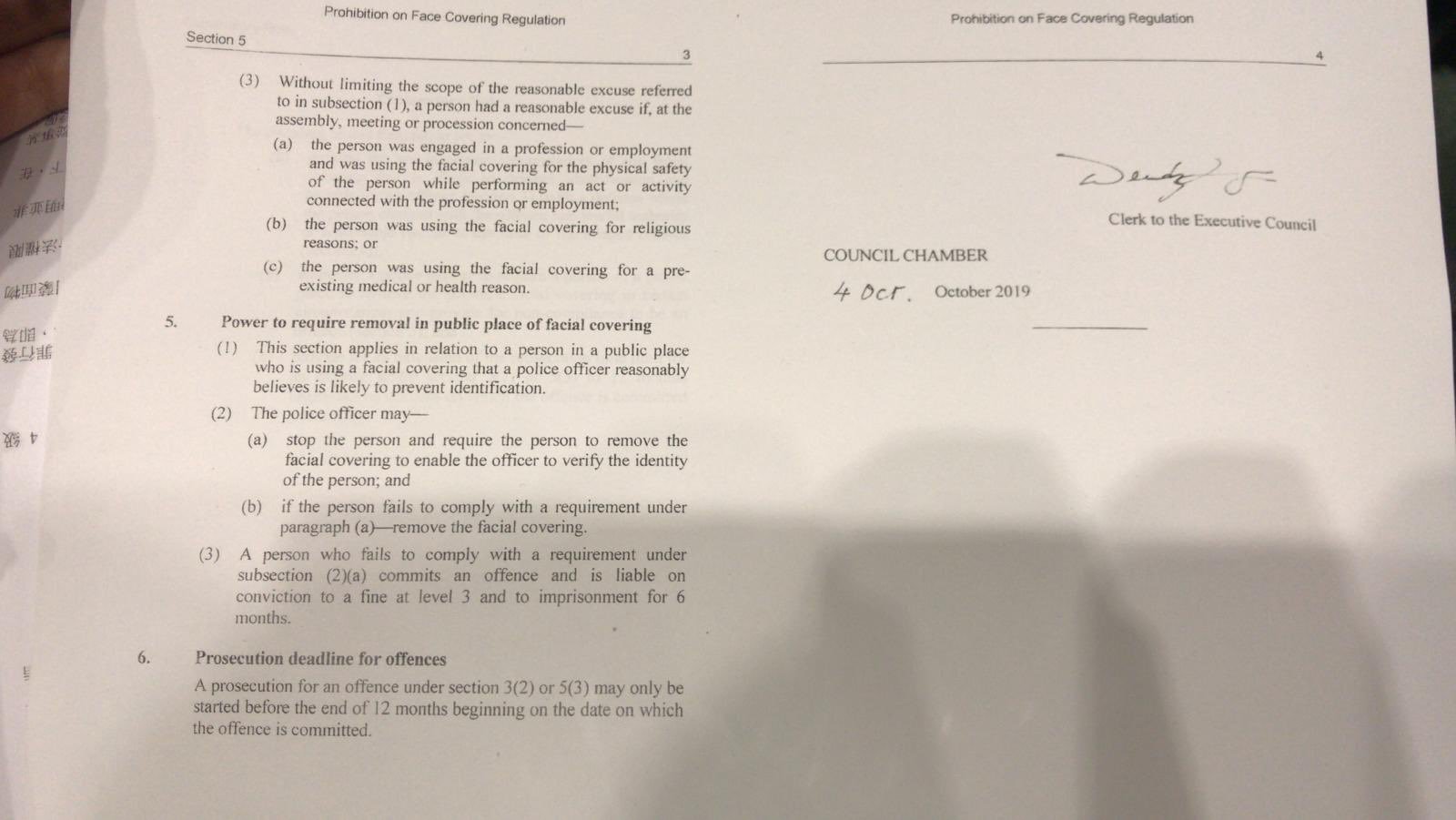