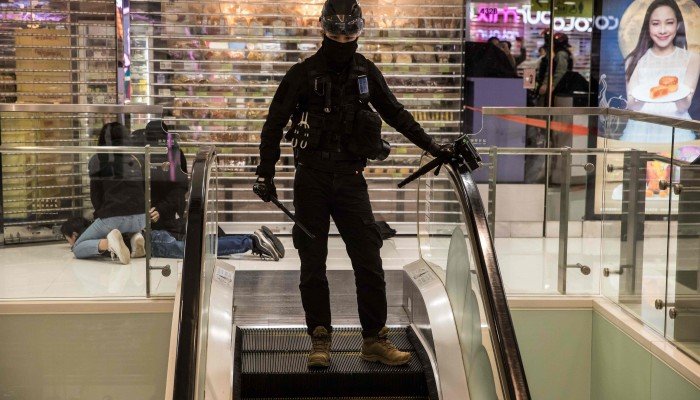 The Hong Kong government needs to dispense with the blinkered view that the protests are hurting tourism and the economy. As the world shifts towards online shopping, Hong Kong must reduce its unhealthy reliance on mainland tourist arrivals

One gloomy year for Hong Kong is ending and the naysayers are predicting that, as long as the protests continue, the economic outlook will remain bad. There is plenty of data to back up their pessimism: visitor arrivals, retail sales, hotel occupancy rates and much more are at or near record lows, and growth this year is expected to be nearly flat.

Affected economic sectors are warning of job cuts and wailing for more subsidies. But trying to prop up that which is failing and believing that what worked in the past will also work in the future is flawed thinking: rather, the city must recognise it has been given a golden opportunity for the overhaul it sorely needs.

Think of all these chances that are being missed. With fewer tourists, rents will continue to fall. This means opportunities for entrepreneurs, whether in innovation and technology, arts and culture or plain out-of-the-box creativity.

Far greater government focus will be needed, but with time, new industries like biomedicine will have a chance to germinate and those that have taken root in information and communications technologies – data analytics, the internet of things, artificial intelligence, robotics and environmental services among them – will be better able to flourish.

The authorities have painted the protests as disruptive and causing chaos. They have sided squarely with shop owners, restaurateurs, hoteliers and tour operators, contending that a vital part of the economy has been impaired.

Demonstrators have targeted shopping districts and malls to pressure the government to meet their demands and their tactics have got officialdom frothing at the mouth. Let the foam pour forth; the authorities have only themselves to blame.

The protests, in their seventh month, are not fully to blame; the US-China trade war has also made an impact on the Hong Kong economy. The authorities continue to be blinkered, however, contending in a recent media release that “the local social incidents with increasing violence depressed consumption sentiment and severely disrupted tourism and consumption-related activities”.

They ignore the reality that mainland Chinese, who typically account for almost 80 per cent of visitors, have been deterred, restricted and scared off by Beijing.

But, to my mind, this is good – the Hong Kong government must wake up to the fact that its reliance on Chinese tourists and shoppers is unhealthy and that there’s every need to steer the economy in a more sustainable direction.

The future, as global trends shift, is online shopping, rather than bricks-and-mortar stores. Also, the day will surely come when Beijing seeks to further boost domestic consumption by lowering the hefty taxes it has imposed on foreign luxury goods, a major reason for Hong Kong’s popularity as a shopping destination. The Hong Kong dollar’s peg to the US dollar also significantly impacts business.

Tourism is considered one of Hong Kong’s four key industries, along with financial services, professional services, and trading and logistics. But while in 2018 the four industries accounted for 57.3 per cent of nominal gross domestic product, tourism itself – which covers retail, accommodation, food and beverage, and cross-boundary transport – represented only 4.5 per cent.

In terms of employment, tourism accounted for 6.6 per cent of jobs, or around 250,000 workers. Tourism is the only key sector significantly impacted by the downturn.

The protesters are innovative and resilient; threats, intimidation and brute police force will not deter them from pushing for their goals. As the government grapples with the challenge of offering a meaningful response, it has to take on board the message sent about how vulnerable Hong Kong’s tourism and retail sectors have become. It’s time for a clear-headed New Year’s resolution.