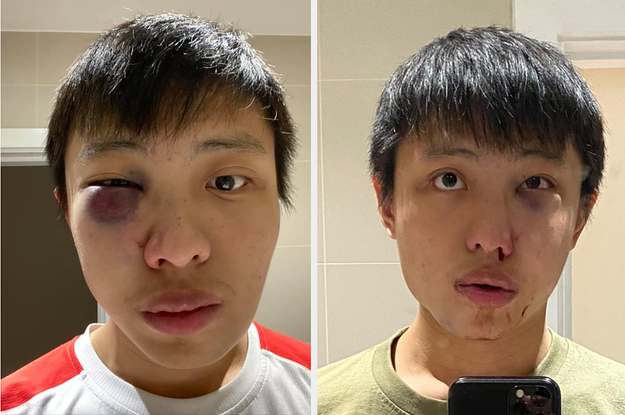 Police in London described the attack as "a racially aggravated assault."
A 23-year-old Asian student said he was attacked by a group of men in London as one yelled at him, "I don’t want your coronavirus in my country."

In a Facebook post Monday, Jonathan Mok shared images of his bruised and swollen face, described what happened to him, and urged others to be vigilant against racism and hate - even in a global city like London. The city's Metropolitan Police Department is now investigating the attack as a "racially aggravated assault."

Mok, who said he has been going to school in London for two years, said the spread of the virus has become an excuse for racism. Although he said he had been repeatedly subjected to racist remarks, he hadn't believed he would face physical violence.

"However, stories and videos of racially-motivated assaults always seem like they would never happen to you. After all, people might be racist and might say things, but surely, they wouldn’t dare attack you, especially on one of the busiest streets in London?" Mok wrote. "To those people who told me that London isn’t racist, think again."

Mok said he was walking past a group of men on Oxford Street around 9:15 p.m. Feb. 24 when one of the men looked at him and said something about the coronavirus.

"I was stunned and turned around to have a look at the man made the statement," Mok wrote. "He shouted ‘Don’t you dare look at me, you ’ (I could not catch the last word because of the accent). Within 3 seconds, he was in my face, together with 3/4 other young men, and a young lady."

The man then punched Mok in the face multiple times, Mok wrote. Another man tried to kick Mok, then said, "I don't want your coronavirus in my country," before delivering another punch across his face, according to Mok's post.

Mok said a few passersby stopped to help him and called the police. The men who attacked him fled the area before police arrived, he said.

In a statement provided to BuzzFeed News on Tuesday, Metropolitan Police described the attack as "a racially aggravated assault." Officials said they are still working to identify the suspects and are reviewing available footage from CCTV.

No arrests have been made.

Mok said doctors told him he suffered a few fractures to bones in his face in the attack and may need reconstructive surgery to repair them.

He did not immediately respond to an interview request from BuzzFeed News.

COVID-19, the disease caused by the novel coronavirus first identified late last year in Wuhan, China, has been spreading across the globe. The disease has sickened tens of thousands and killed more than 3,000 people, with the majority of cases in China.

Cases have been reported in more than 30 countries, including the UK, with sizable outbreaks in South Korea, Italy, and Iran.

In Mok's post, he said the outbreaks were just the latest reason for racists to act on their hatred of people from other countries or who have a different skin color. He urged people who read his post to do their part to be the change.

"Racism has changed it form and shape through the years and it is once again rearing its ugly head in light of the COVID-19 crisis," he said.
#COVID-19  #Covid  #Coronavirus  #Facebook
Add Comment