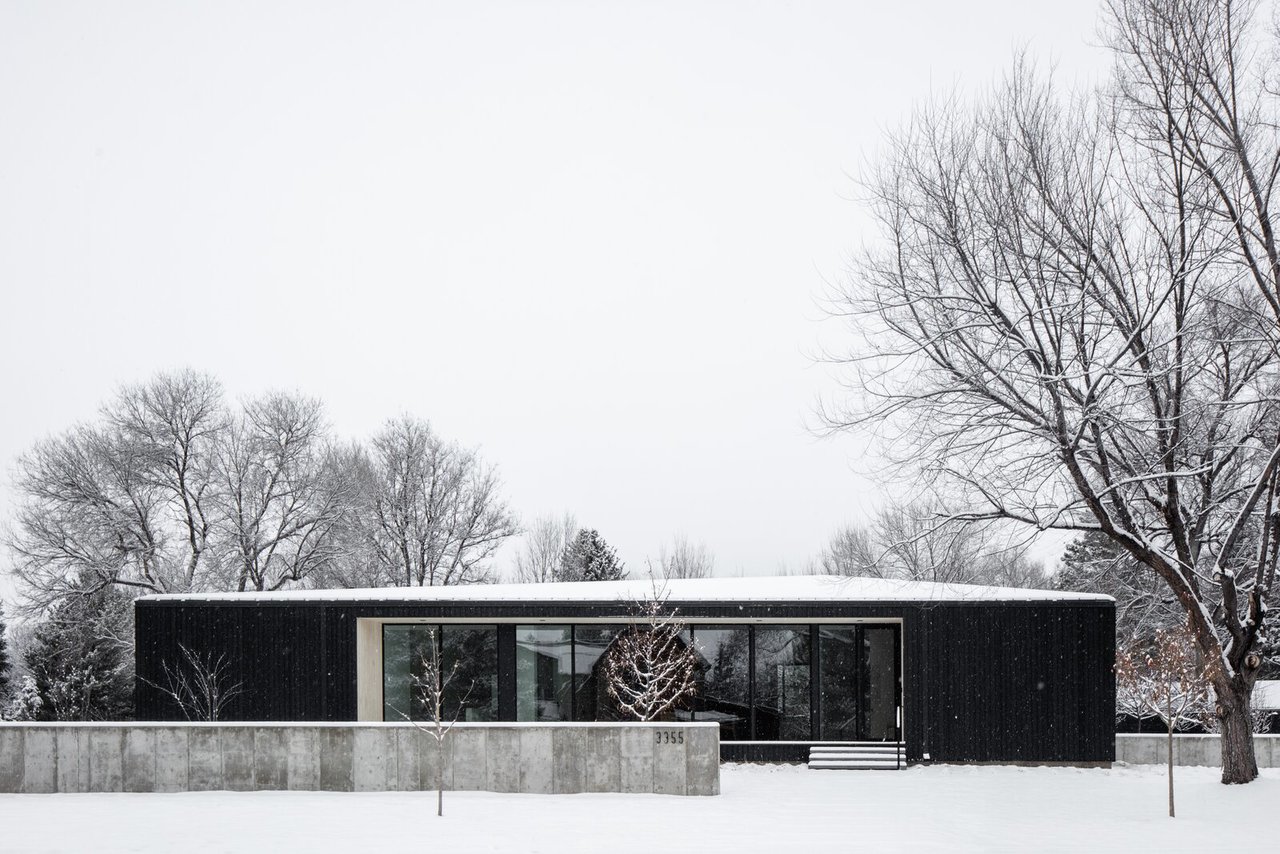 An Artfully Crafted Boulder Home Glows From Within a Charcoal Exterior

Drawing inspiration from artist Robert Kelly, Studio B creates a simple yet bold home that explores ideas of layering and translucency.

The paintings of Robert Kelly appear as strict depictions of dark, geometric shapes on pale backgrounds. Close up, they reveal a subtle layering: Kelly paints his opaque circles and squares over indistinct collages of found material, including vintage film posters, printed antique paper, and weather charts.

Studio B sought to establish a similar dynamic with Vista Drive Pavilion, an elegant black box that houses a complex of brightly lit, semitranslucent spaces. 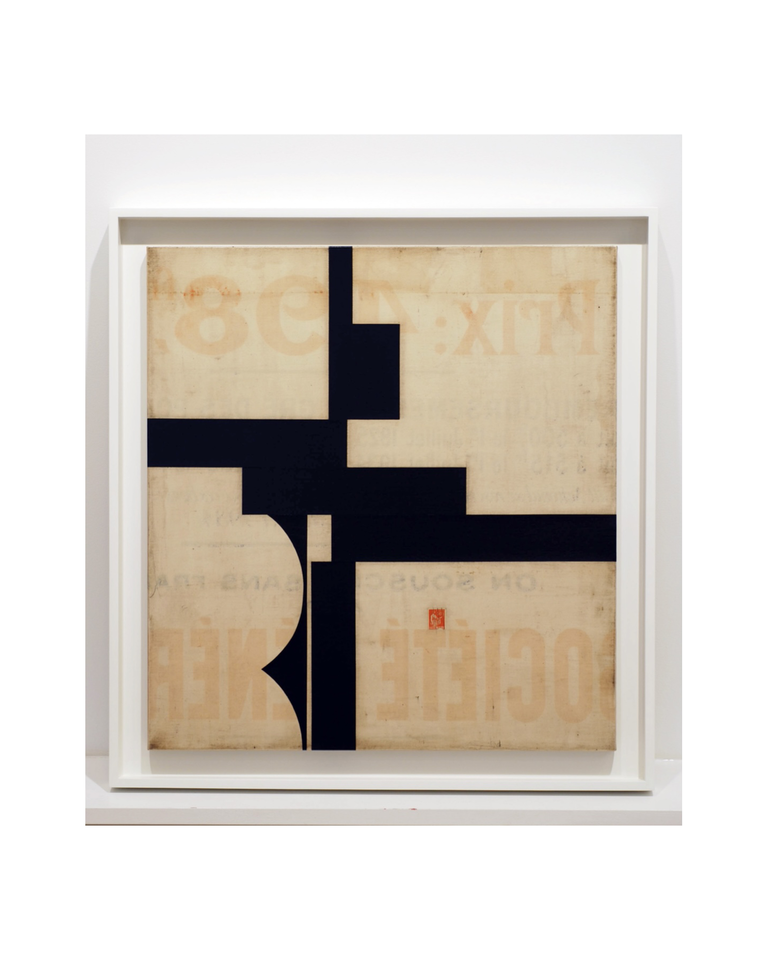 Even the exterior-a wire-brushed, black-stained STK Cedar-has layers, with a cloak of solar paneling on the south-facing roof, and a sheath of weatherproofing on all sides. The 14-kilowatt photovoltaic system on the roof is cleverly integrated into the architectural form, while the angle and orientation maximize the efficiency of the panels throughout the day. 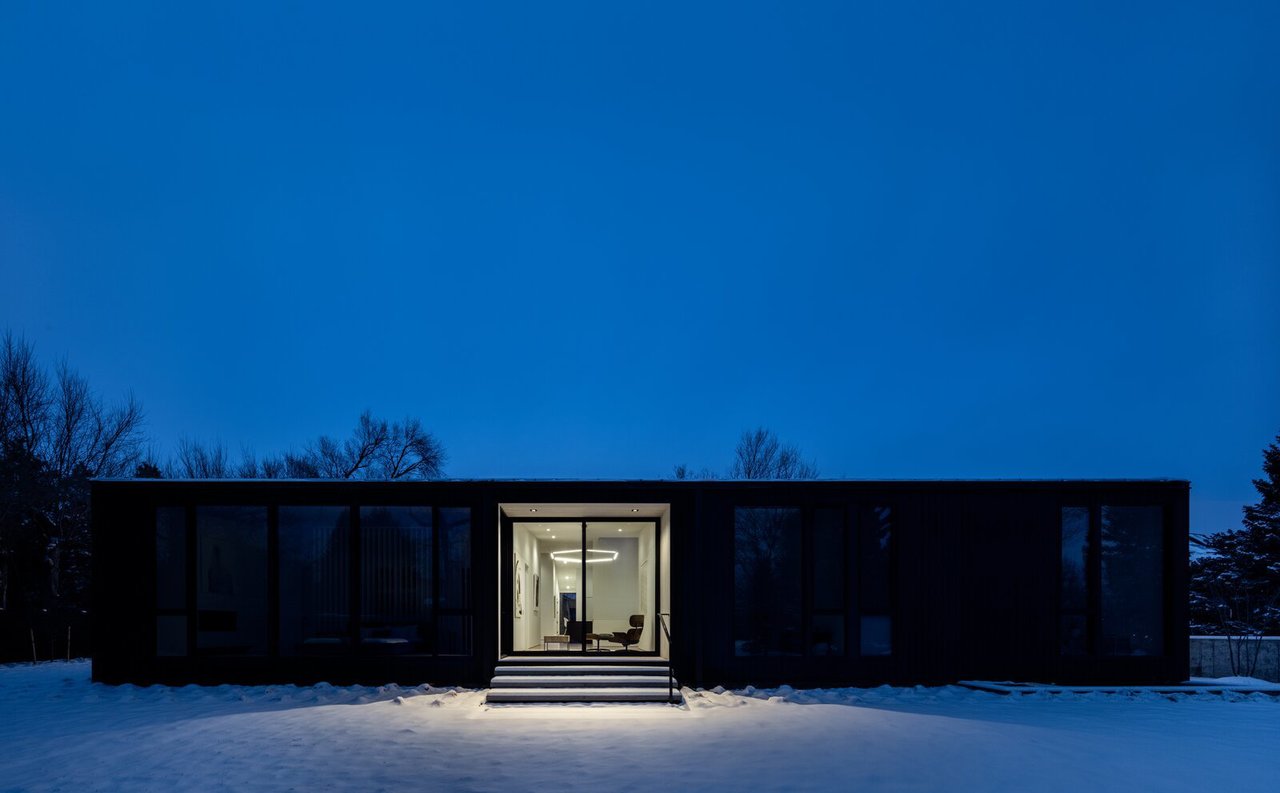 Just as the geometric shapes in Kelly’s paintings appear to hover in space, the Vista Drive Pavilion seems to float lightly in its simple landscape.

"In the evening," says Mike Piché, principal at Studio B, "the blackened exterior fades into the darkness, leaving a uniform glow where the portals occur. What remains is a black, floating silhouette containing a collage of form and light." 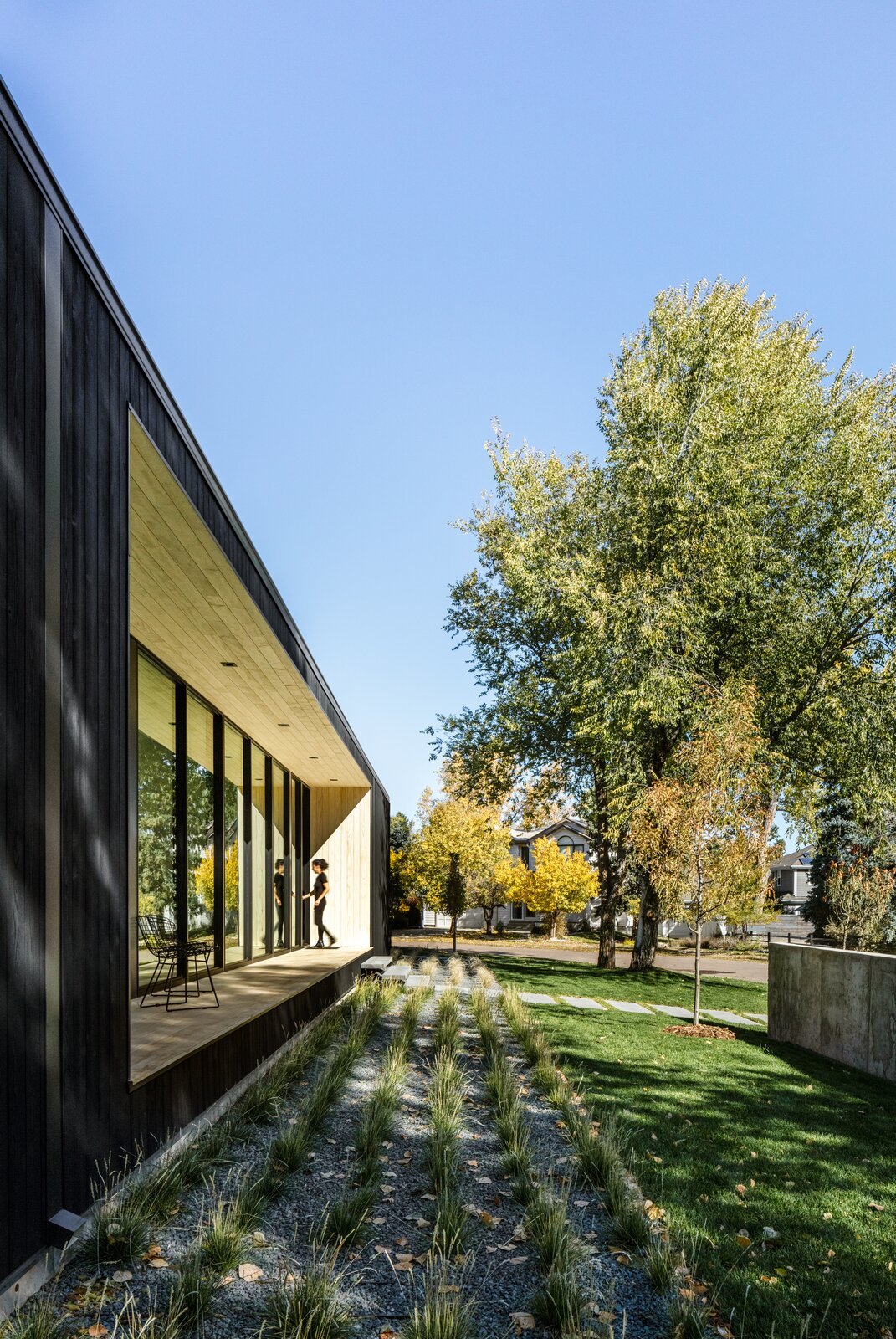 Piché attributes this quality to the added thickness of the insulation, which ends just above ground level. The thick outer layer also allowed Studio B to build the downspouts directly into the siding for a smooth exterior.

Like Kelly's paintings, the home borrows from a variety of sources. The immediate neighborhood has a "park-like" vibe, few sidewalks, yards that flow into one another, and midcentury single-story homes. Within this setting, the team conceived of a concrete-and-glass pavilion that sits comfortably in its landscape and is accessible from all sides. 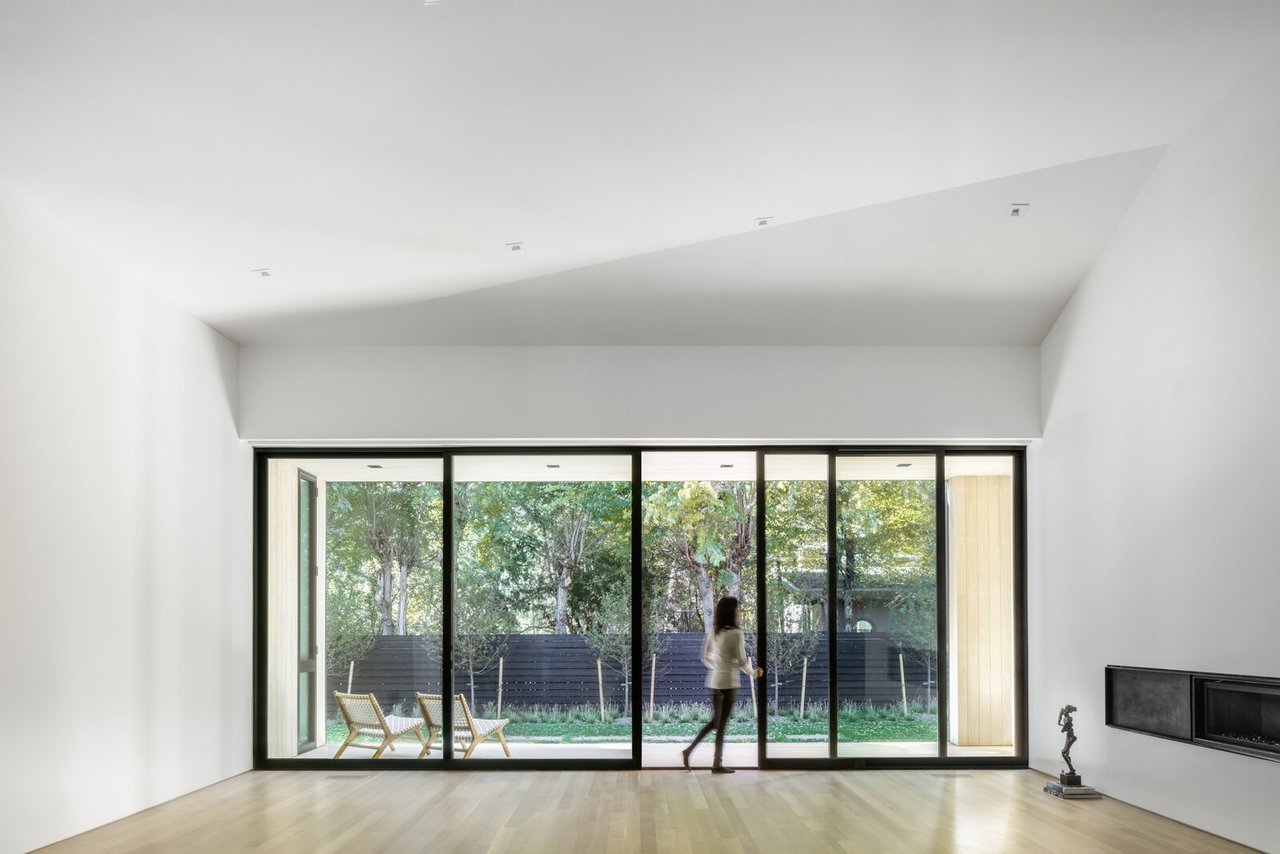 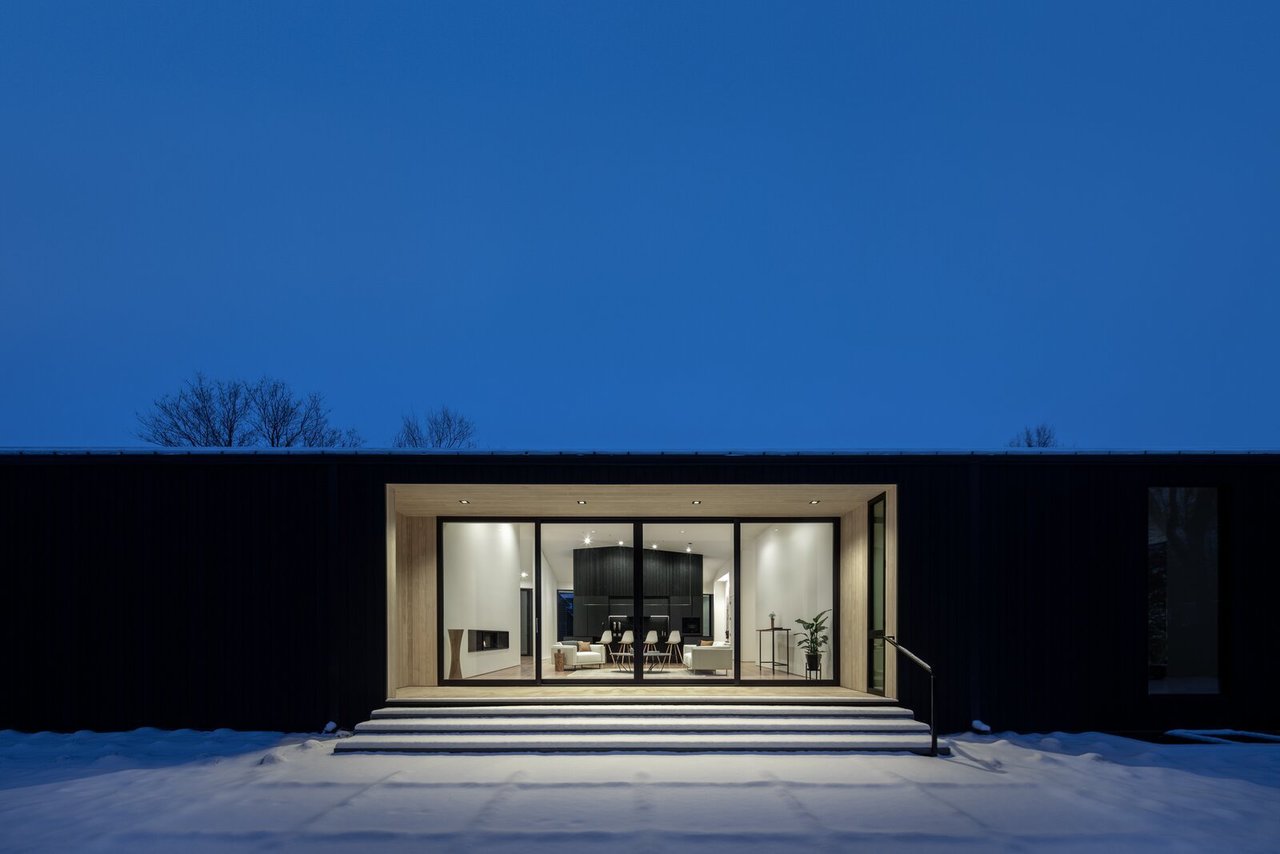 "We talked a lot about Eero Saarinen’s Miller House in Columbus, Indiana," says Piché. The Miller House, a midcentury architectural icon, inspired "the posture" of the Vista Drive Pavilion, as well as its surrounding garden.

"The exterior floating stairs are also uniquely midcentury," explains Piché, adding that they’re reminiscent of the Farnsworth House and Crown Hall, both by Mies van der Rohe. Thus, the team imagined Vista Drive Pavilion as a modern house that "responds to the neighborhood without replicating the past." 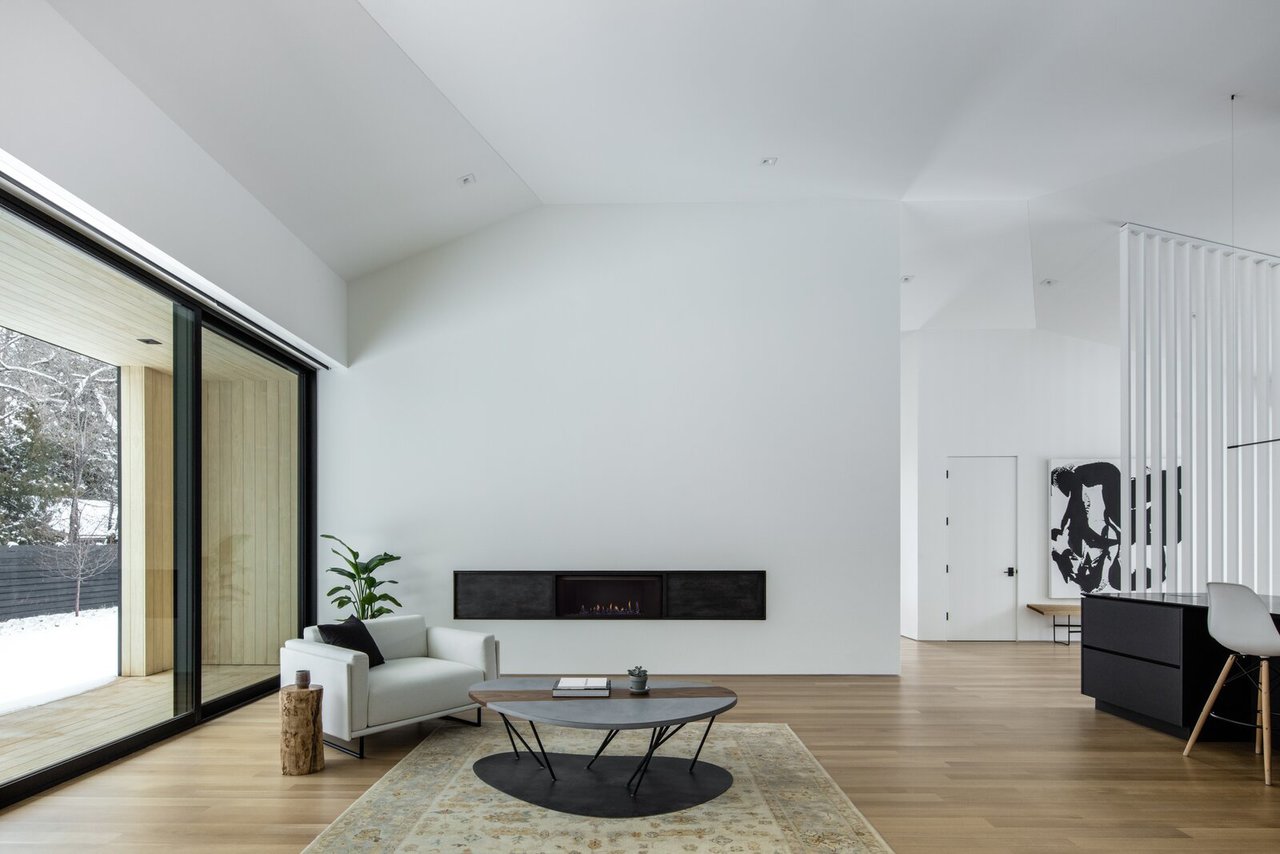 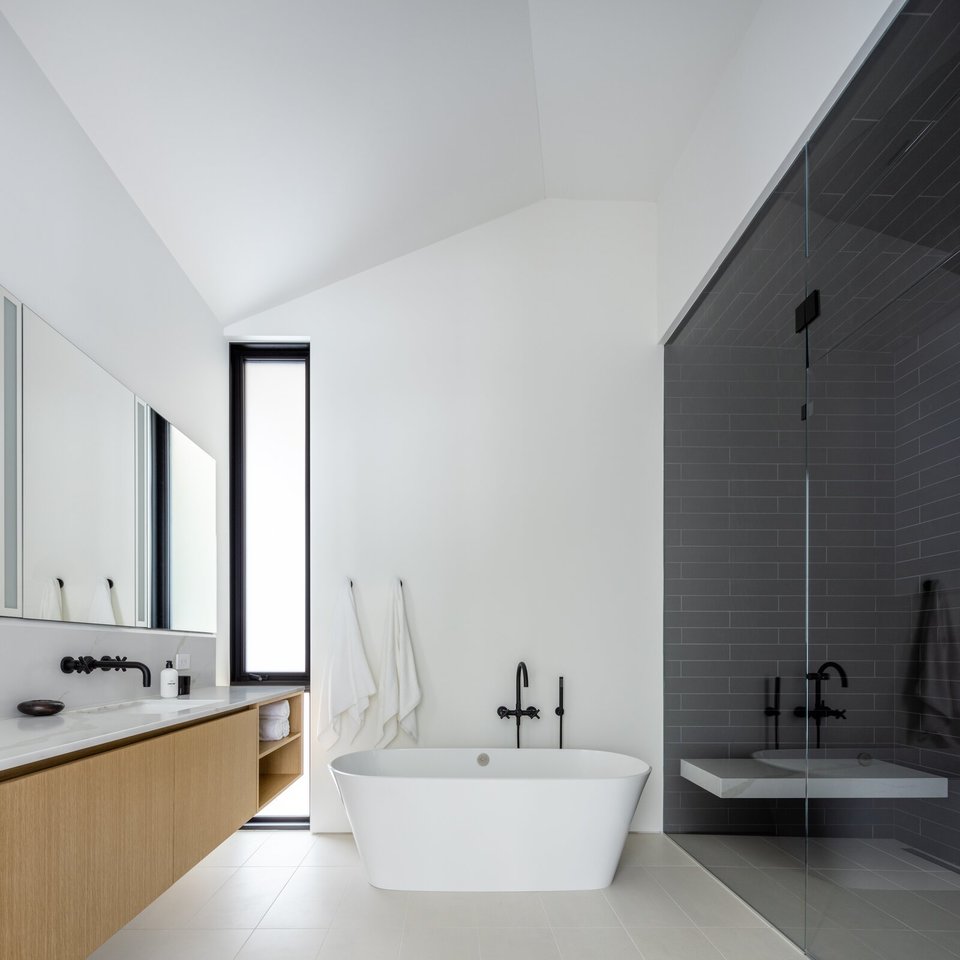 Just as Kelly explores simple shapes in his paintings, Studio B played with the exterior simplicity and interior complexity of a trapezoid. From the front entrance, the home appears to be a flat-roofed box. But inside, Studio B allowed the ceiling to follow the surprisingly varied roofline. "The subtle angles created some interesting geometries and spatial richness," says Piché.

The ceilings rise to peak height over the home’s common spaces, while the bedrooms and office spaces are more intimate with slightly lower ceilings. In keeping with the variegated ceiling height, Studio B varied the flow and shape of the living spaces. Thus, the common spaces wind throughout the home, each with a window or steps to the exterior. 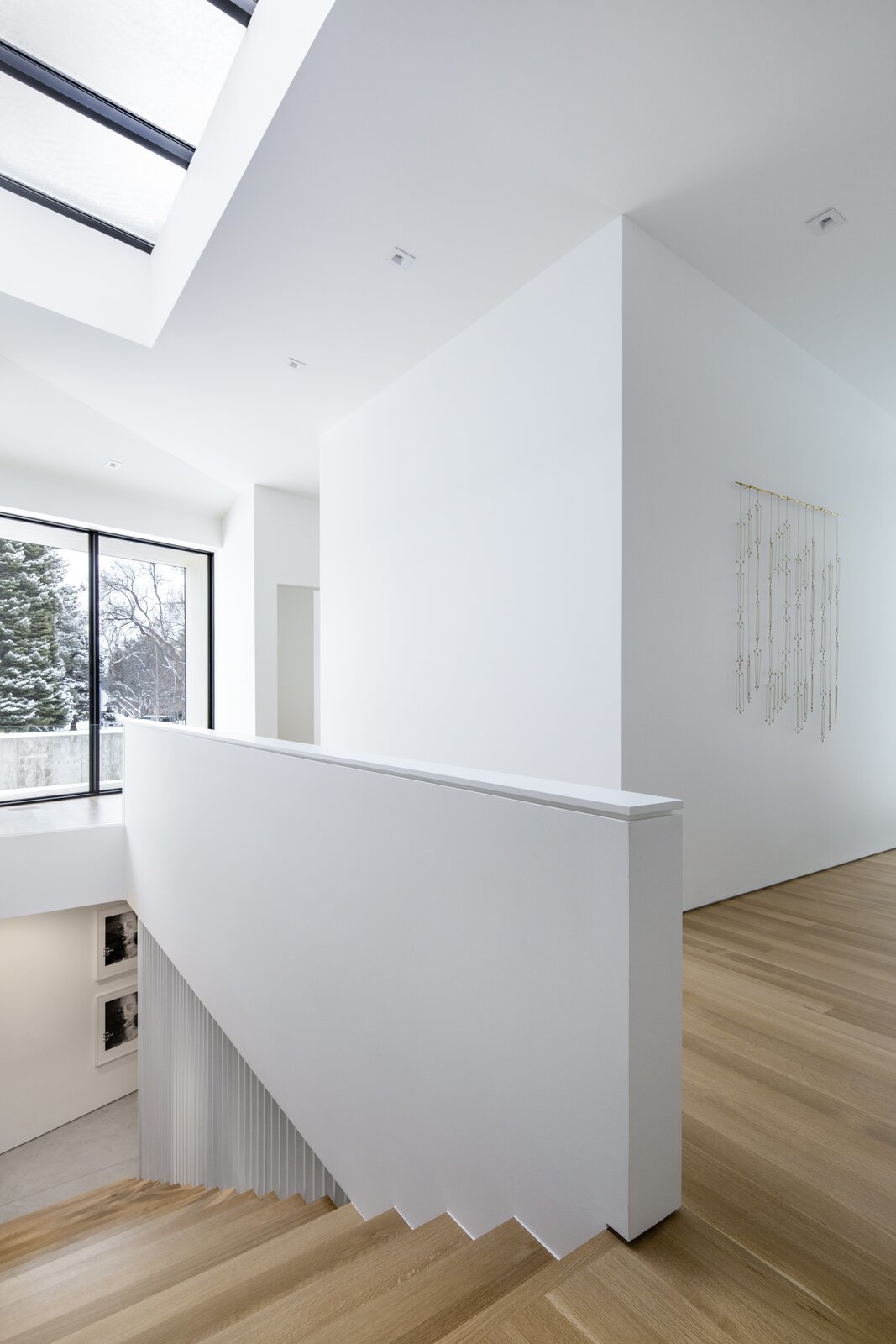 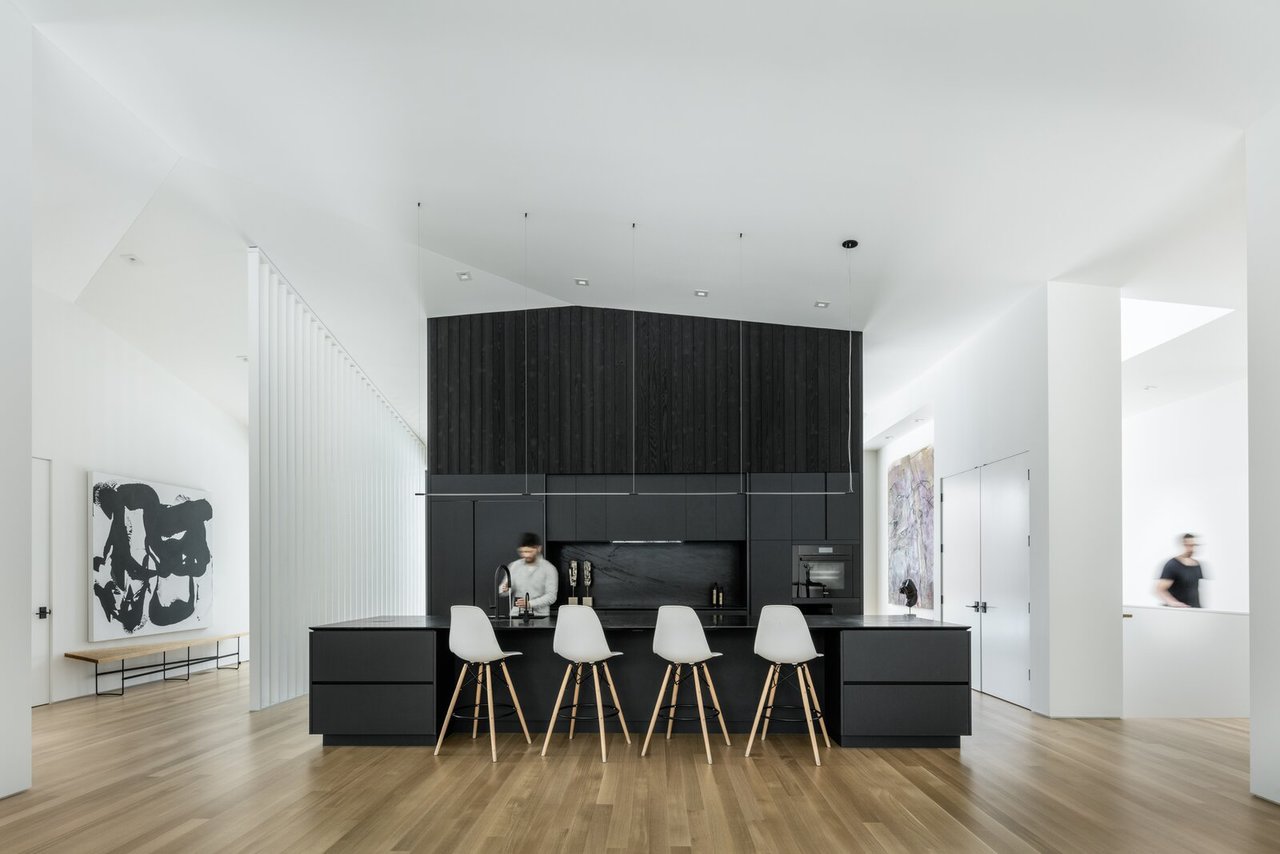 In his artworks, Kelly makes a sharp contrast between his dark geometric shapes and the ivory or white background. Here too, Studio B contrasts the solidly black exterior with a bright interior. The design team painted the walls and ceilings a pure white and matched pale wood furniture with white oak floors.

Located at the very core of the home, the kitchen is a large, dark block that both draws focus and separates the front of the house from the living room and backyard. The dining room on the other side of the kitchen is more connected to the front yard, front porch, and street with large glass walls and decorative lighting.

The house is open enough that the kitchen has views out to the exterior windows on all sides. In turn, light from four sides penetrates the space throughout the day and reflects up the sloped ceilings. 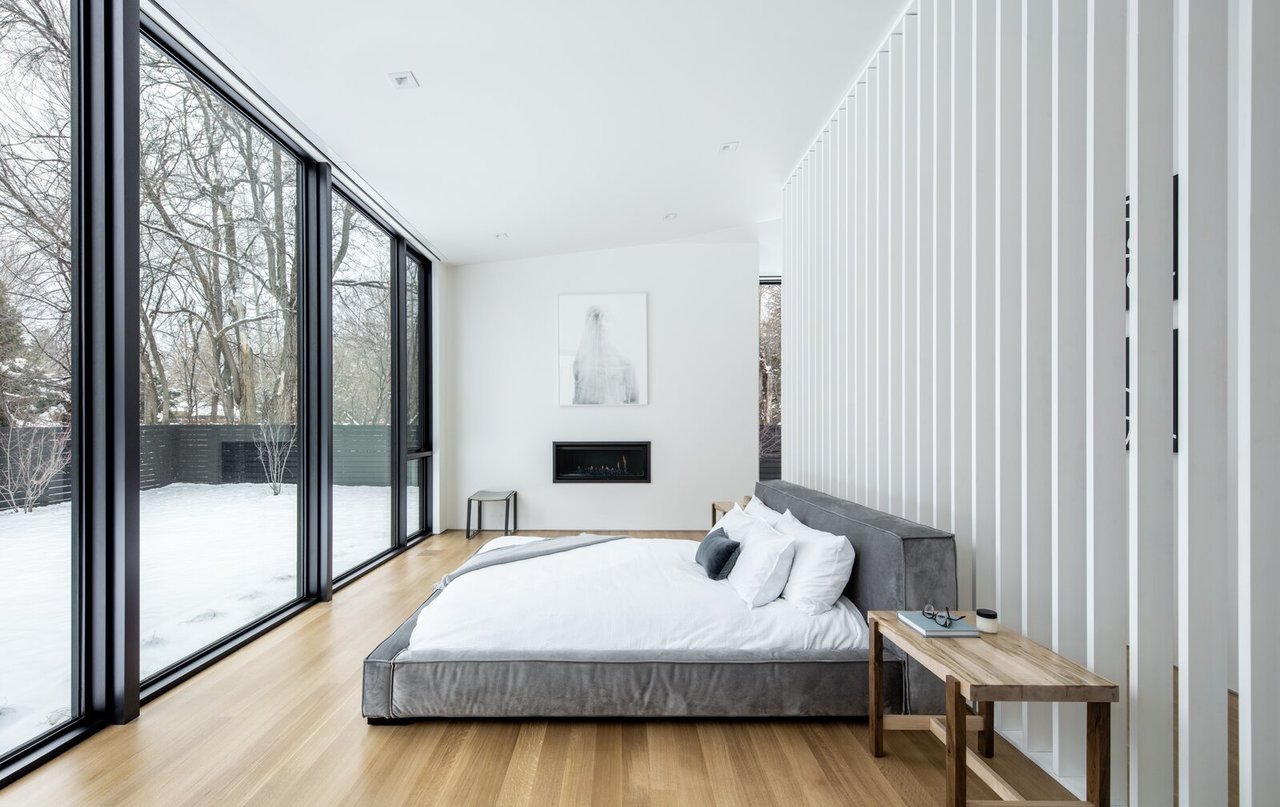 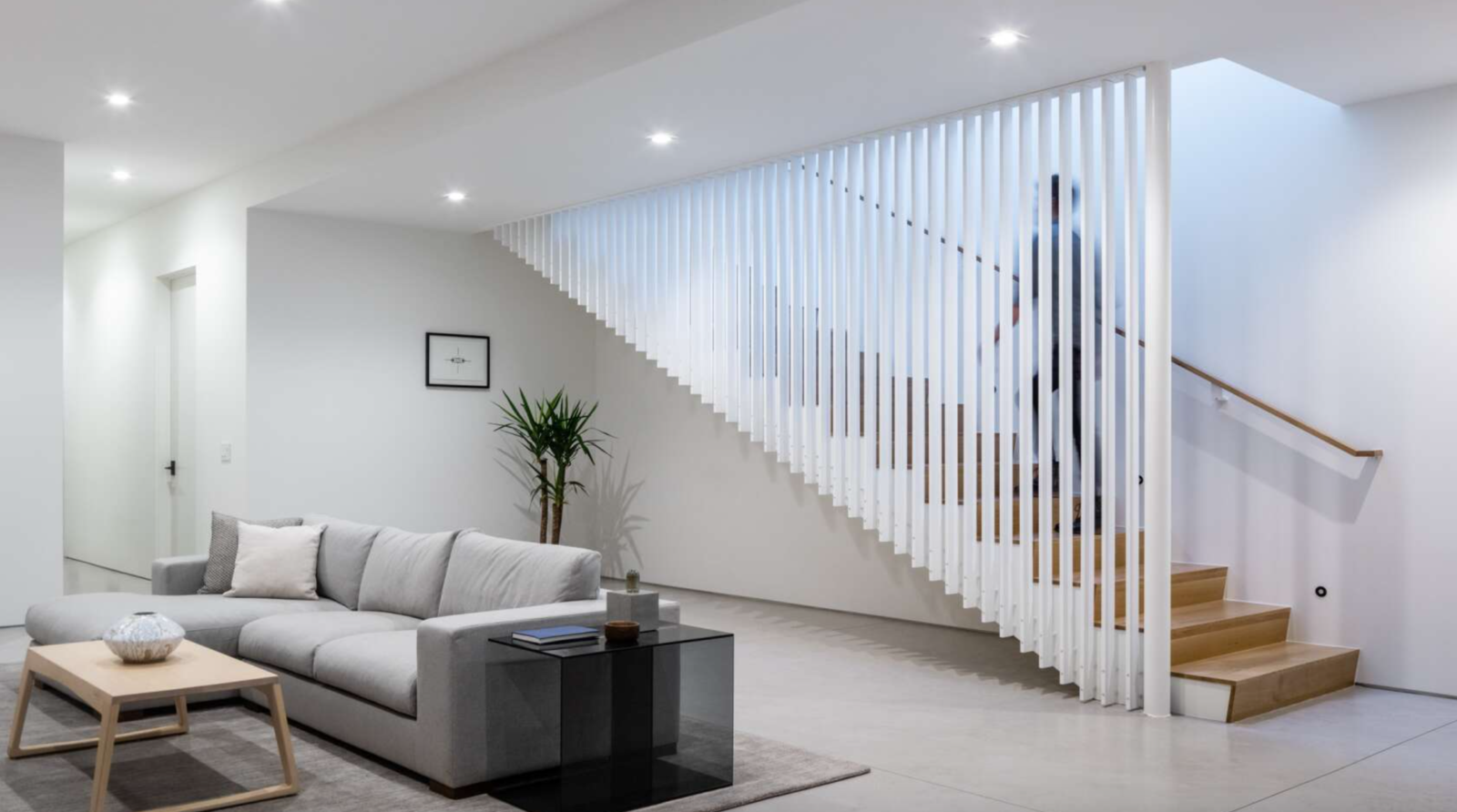 To mimic the levels of layering and transparency in Robert Kelly’s paintings, the team installed slatted, semitransparent walls that layer light throughout the day. "We wanted the space and light to flow freely from one room to the next," Piché explains. "The slats helped us do that, while at the same time keeping certain areas intimate and defined."

Even the below-grade ground floor-which includes a media room, a gym, two bedrooms, and a storage space-is flush with light. Studio B accomplished this with a large skylight just above the staircase, vertical metal slats to keep the stairwell open, and, in the lower rooms, deep window wells. 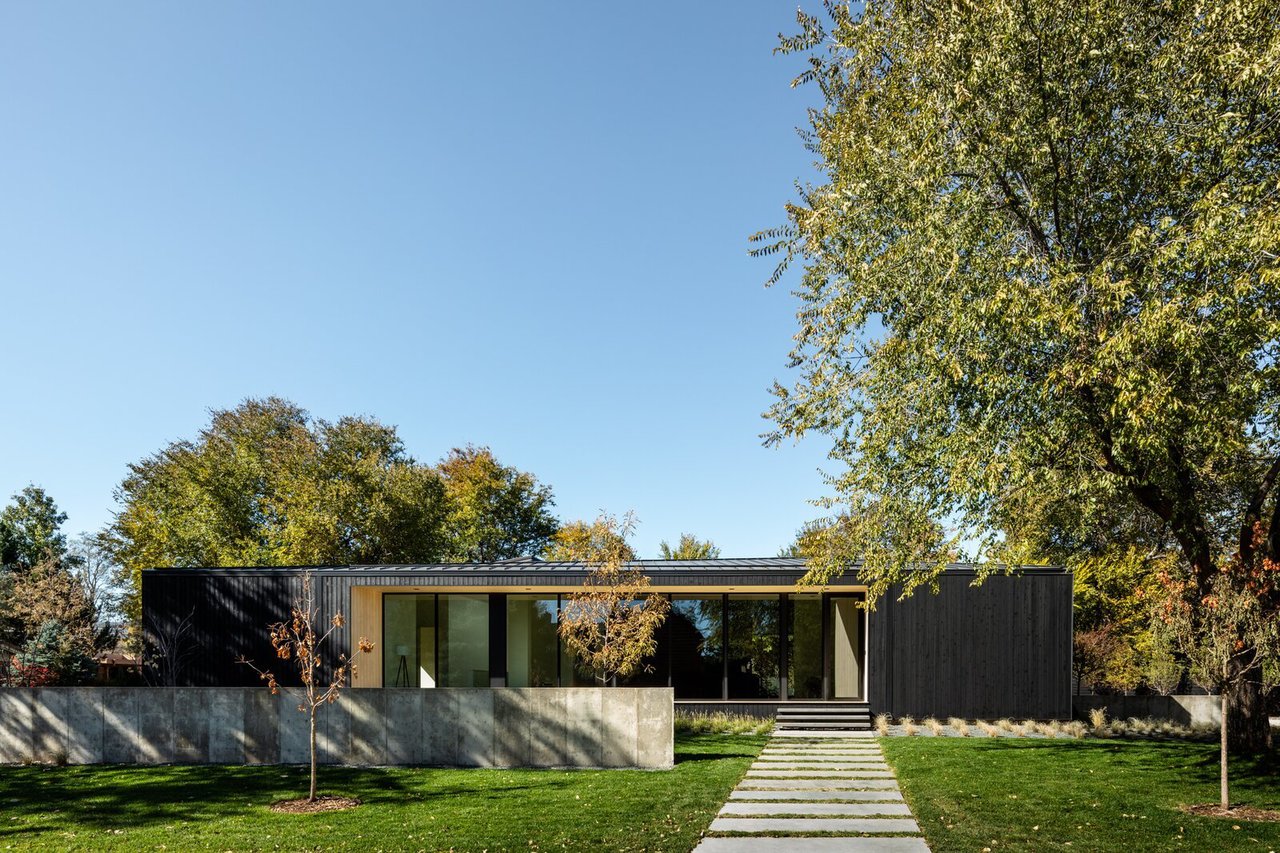 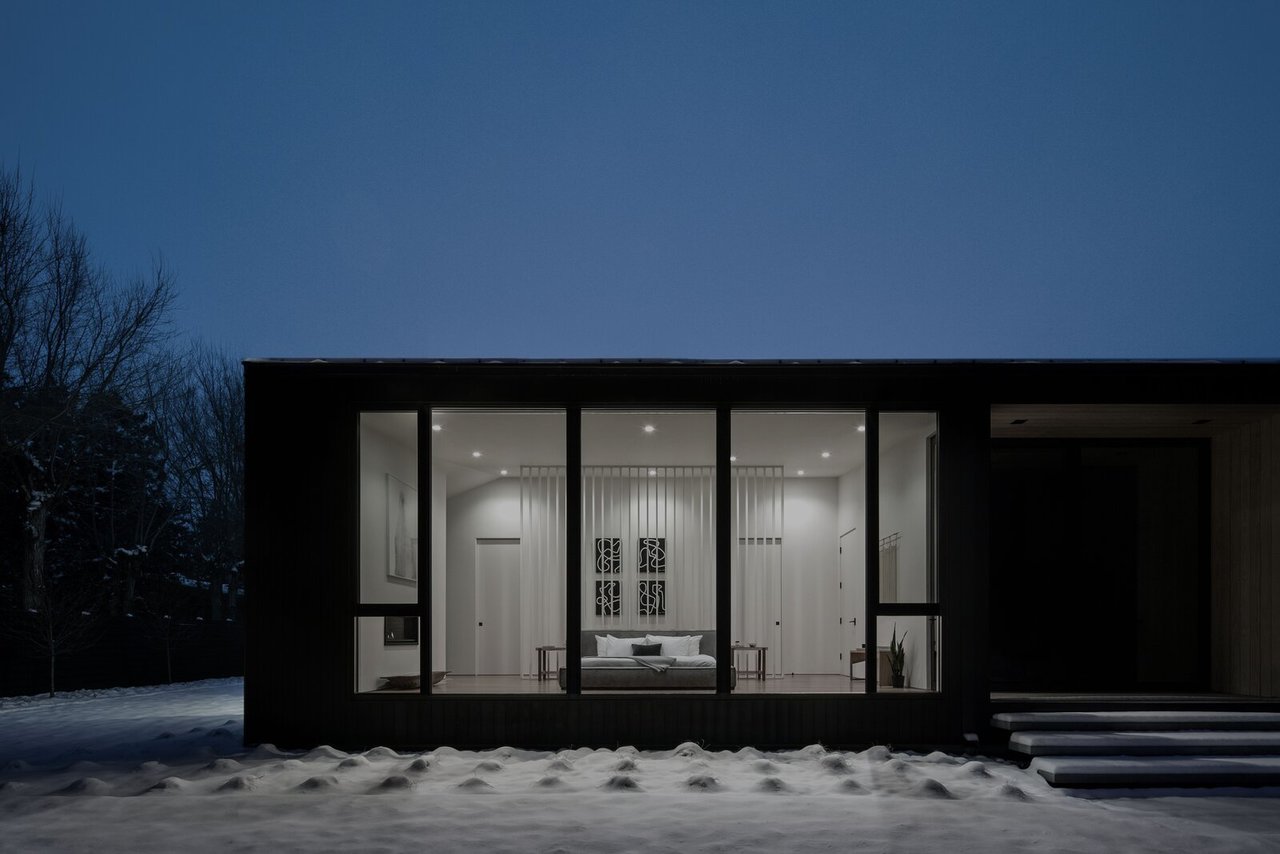 Studio B did not let stylistic choices detract from their fundamental commitment to sustainability. From the native grasses and low-maintenance shrubs to the original, mature trees, they embraced the local landscape. They also selected locally available building materials, including recyclable and biodegradable wood. Finally, the solar panels and sheath of insulation make the home energy efficient all year round.