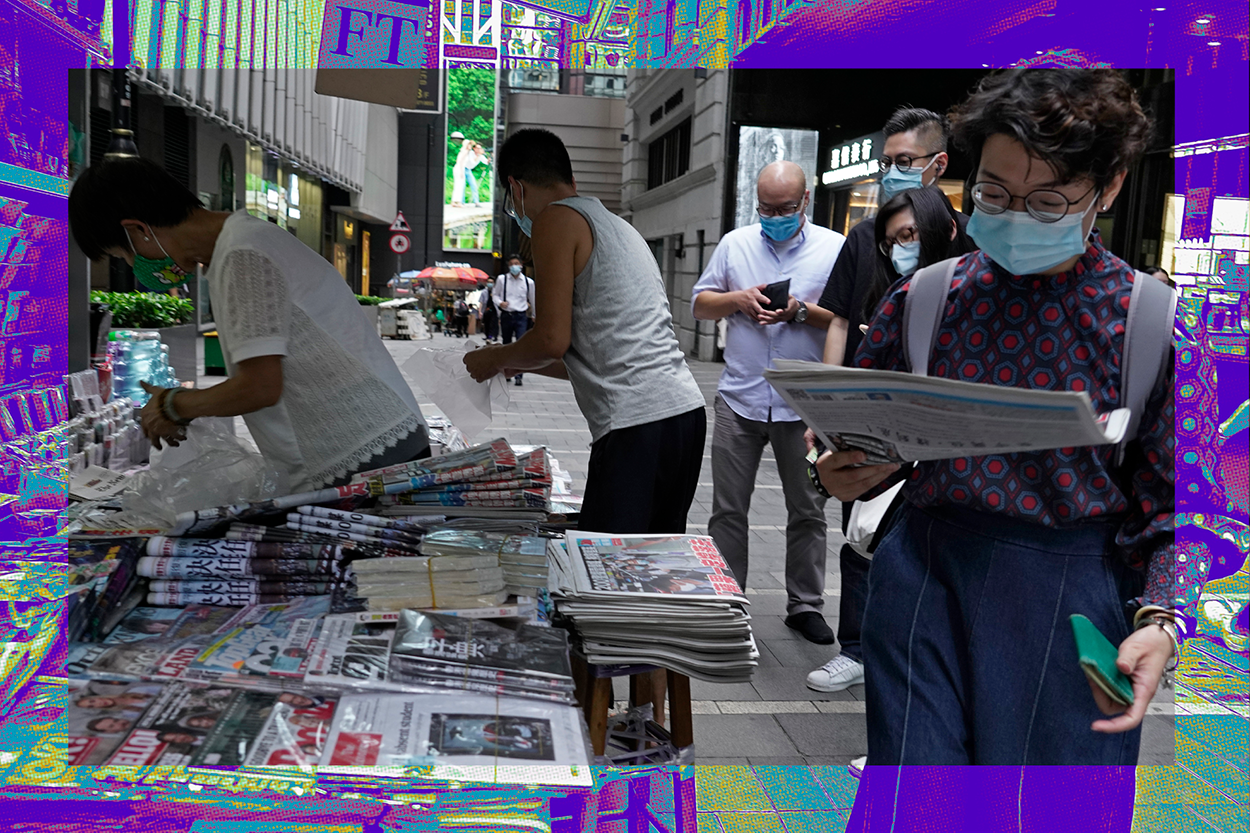 In 2019, Hong Kong was one of the most widely covered news stories in Asia. Journalists around the world came to Hong Kong to document jam-packed streets, umbrella canopies, and plumes of tear gas as the city erupted last summer in response to a proposed extradition bill to China.

Hong Kong has long been a hub for media organizations in the region, and the spate of reports that came out of the protest movement are a physical manifestation of the relatively free rein of journalists on the ground there.

As the city convulsed through months of peaceful demonstrations and fiery confrontations, journalism coverage was both a symbol and function of the press freedom that sets Hong Kong apart from China, where the public flow of information is often tightly controlled.

Like much of the world, Hong Kong in 2020 looks decidedly different. The coronavirus pandemic further quelled protests that had already started to shrink following government bans on public gatherings and mass arrests.

As Hong Kong worked to contain the spread of the virus, Beijing passed a national security law that gives China broad powers to judge and punish dissent.

The new law has called into question the extent to which press freedom in Hong Kong can survive, with far-reaching provisions that may set a new, albeit vague, precedent for what people in Hong Kong, including journalists, can and cannot say.

The indeterminacy of the law lends itself to speculation and media coverage that focuses on the city’s impending slide into authoritarianism.

In the meantime, very real changes are happening in the journalism industry: Opinion writers are removing their bylines, newsrooms are soliciting help from lawyers, and reporters are seeking extra advice about how to protect their sources.

And women working in journalism on the ground say amid feelings of uncertainty and confusion, they are trying to figure out how to do their jobs.

Compared to the visceral experience of covering the street action of protests, staying tuned in to the fallout of the new law requires attention to this kind of detail, Mary Hui, a reporter at Quartz, said.

After the passage of the law, she is trying to focus on stories that will make this feeling tangible for people who don’t live there. “The changes in Hong Kong are happening very quickly, but often in ways that you wouldn’t immediately notice,” Hui said.

Signs of the law’s creep into daily life sometimes happen beyond the immediate line of vision, she said: professors not getting tenure or being fired, people in offices being told to be cautious about what they post on social media, or being asked to take down signs with pro-democracy slogans.

“All these little things that wouldn’t necessarily rise to the level of being a huge story, added up together really shift the entire way Hong Kong society functions,” she said.

Hong Kong’s leader, Carrie Lam, has said the national security law will not limit press freedom if media does not commit any offense under this piece of legislation. Meanwhile, organizations, including the Hong Kong Foreign Correspondents’ Club, have expressed concern that the law, and possible new procedures for processing visas for foreign media, will impede on the ability of journalists to report freely and without reprisal.

In addition to covering the confluence of the coronavirus pandemic and the national security law, journalists in Hong Kong have already had to turn the lens on themselves.

At the end of last month, Hong Kong Free Press said the Hong Kong Immigration Authorities denied a work visa for Aaron Mc Nicholas, an incoming editor, with no further explanation. Earlier this month, Jimmy Lai, the founder of a pro-democracy publication Apple Daily, was arrested, and journalists’ desks searched.

Protecting self and sources

The intimidation factor of a law with such a grand scope is already having a chilling effect as reporters try to figure out where their legal and personal boundaries are, said Jennifer Creery, managing editor of Hong Kong Free Press.

A subtler trend she foresees in the fallout of the national security law is self-censorship among reporters who don’t know where red lines are because they haven’t been tested.

“Self censorship has always been a threat to press freedom in Hong Kong and I think if anything, the NSL in Hong Kong has exacerbated those existing fears,” she said.

After the national security law passed, Sharron Fast, a media law expert, and lecturer at the University of Hong Kong’s Journalism and Media Studies Centre, said she started receiving calls from former students asking for advice about how to report stories with sensitive sources with the knowledge of the heightened stakes.

“We need more tools on their legal armory than ever if they’re going to report without fear or favor,” she said. “The risk is not just personal.”

For local journalists, keeping abreast of the changes the law brings also means gauging whether pursuing certain stories as bylined reporters would put them at personal risk.

These kinds of events add an extra layer of complexity for Hong Kong reporters who have to live with the aftereffects of the law, some of whom are now thinking about what it would take for them to decide to leave.

Hui from Quartz said that question gets to the heart of what it means to report on Hong Kong, and the conflicting pangs of thinking about having to cover its changes anonymously or from afar.