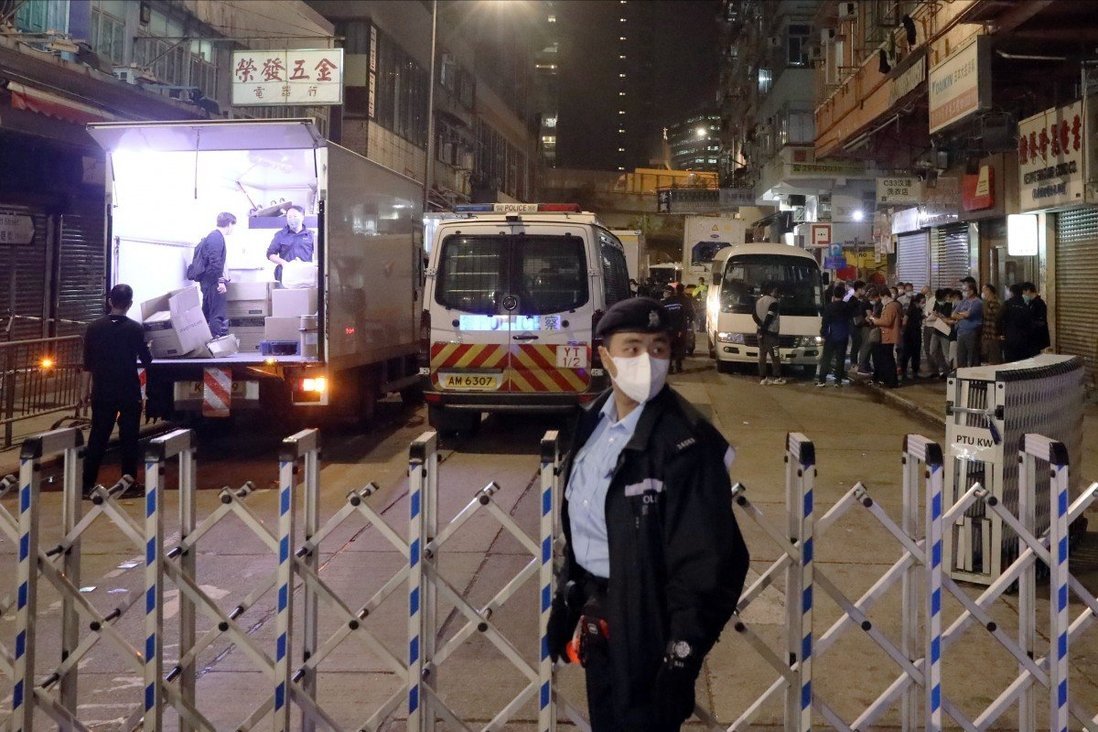 Metal barriers blocked streets, police addressed people through loudspeakers, and some residents in the Hong Kong area of Yau Ma Tei faced a night sealed off from the rest of the city, after an “ambush-style” Covid-19 lockdown on Tuesday.

People living in blocks numbered 9-27 on Pitt Street, and Shun Fung Building on 3 Tung On Street, were taken by surprise, with the government acting at the last minute to avoid giving residents advance warning through leaks in the media.

The lockdown, which began at 7pm, was expected to end at 6am on Wednesday, and those in the area had been told to stay inside until they had been tested for Covid-19. But officers also said people should be prepared to miss work, because they were unsure of whether testing would finish on time. 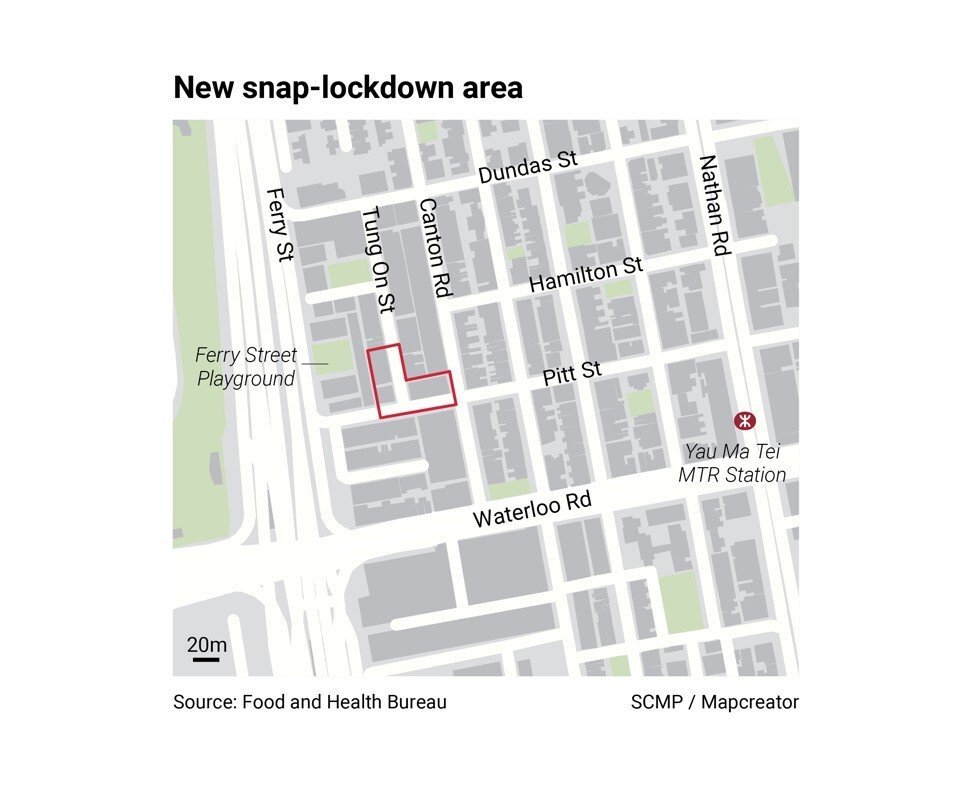 Police cordoned off the area with metal barriers and directed residents of the 12 buildings to booths where health officers checked their identity cards and went through some procedures. Trucks were seen driving into the area to offload materials.

Residents came down from their homes to register for tests around 9.30pm, while supplies, including canned food and water, were set out along tables outside the temporary screening stations and handed to those who had been tested.

At about 11pm, Commissioner of Police Chris Tang Ping-keung visited the site and said this lockdown would be conducted more swiftly because of the lessons learned from the previous one. He thanked those in attendance for their hard work.

Officers used loudspeakers to tell residents indoors to notify relatives who had yet to return to the area, as well as to urge them to prepare enough food.

Yau Tsim Mong district councillor Lee Wai-fung said a lot of the residents were elderly, people who had long-term illnesses, and tenants in subdivided flats.

“Will the government be preparing food and other arrangements to help them?” he said. “I don’t know why the government had to ambush people like this as many residents have not even returned.”

Lee said the buildings numbered 15-27 on Pitt Street had 36 confirmed cases, while a mandatory testing order on Shun Fung Building had only be lifted hours before. 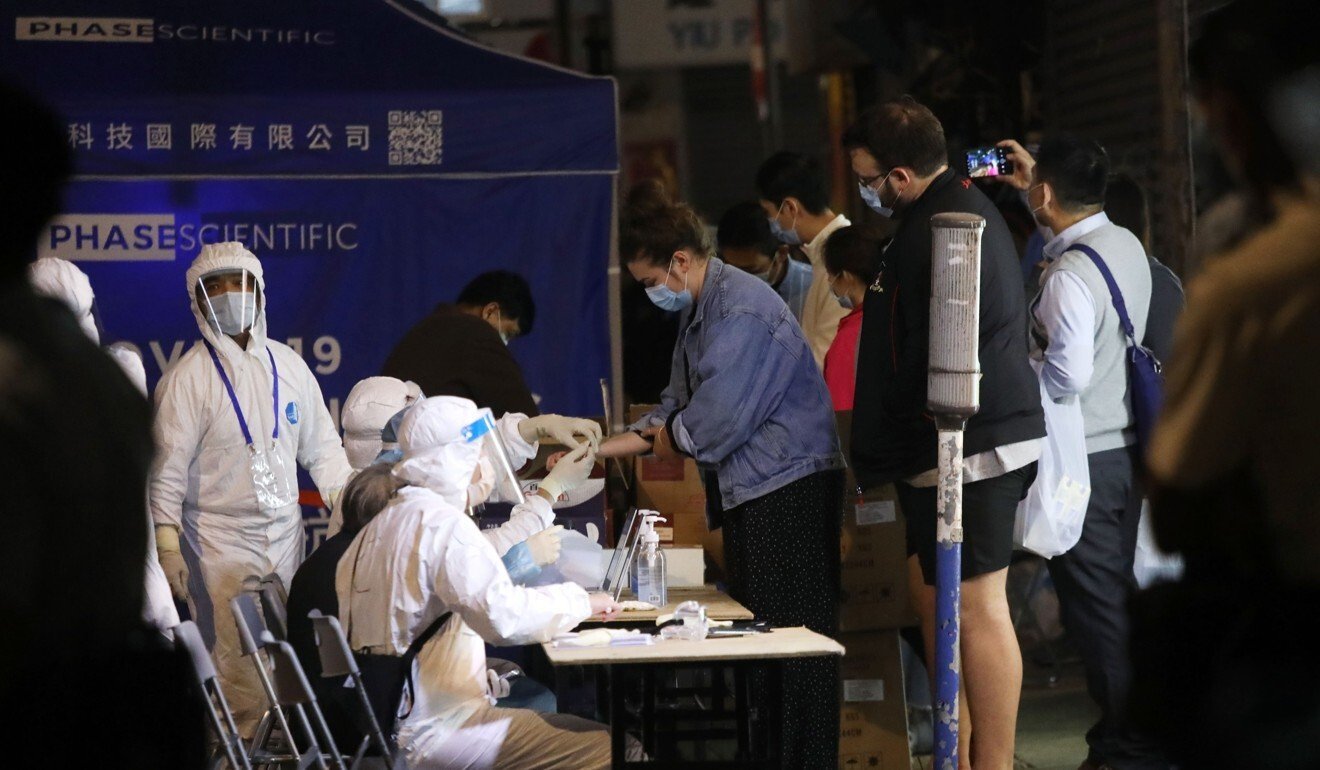 Residents under lockdown in Yau Ma Tei queue to get tested for Covid-19 on Tuesday.

The move came after Chief Executive Carrie Lam Cheng Yuet-ngor said on Tuesday morning the government would try to implement “ambush-style” lockdowns in the future.

“We should do smaller-scale, restriction testing operations, but we could do more at the same time,” she said.

Before the latest lockdown, authorities announced two more neighbourhoods would also be placed under stepped-up mandatory testing orders, and existing social-distancing measures would be extended by another week.

Residents of any building with just one coronavirus infection within two areas in Hung Hom and Mong Kok districts would have to undergo mandatory screening under the tightened measures.

An existing mandatory testing zone in Jordan was also expanded, while one in Sham Shui Po remained the same. 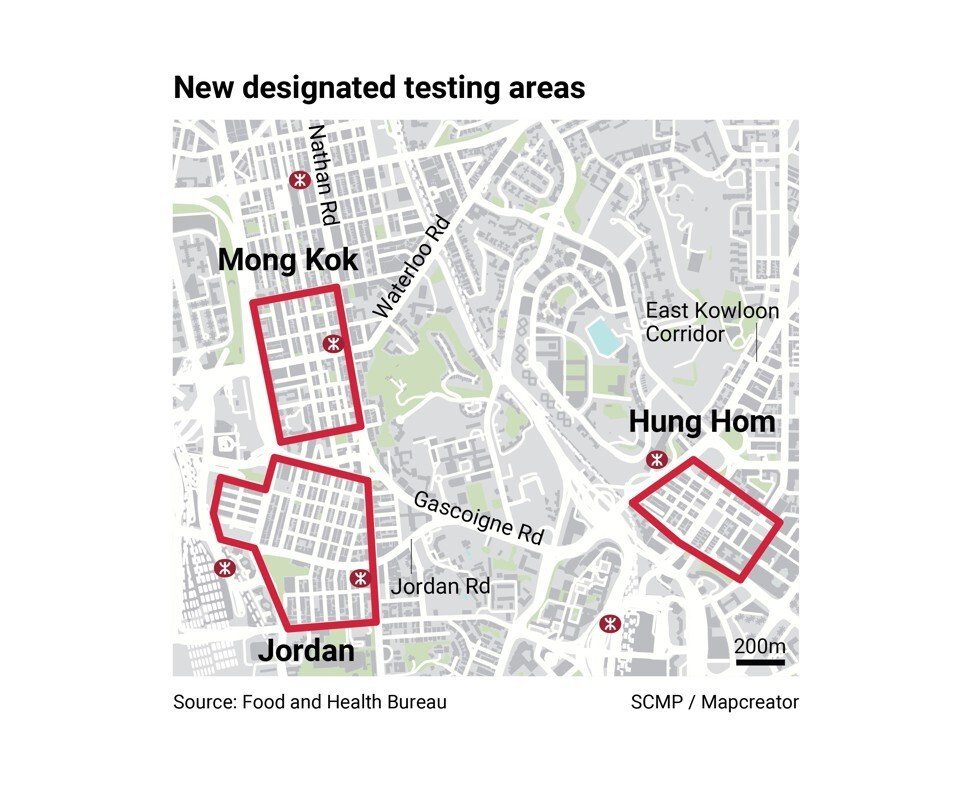 “The new districts were added after looking at the distribution of infections in buildings over the past two weeks,” Undersecretary for Food and Health Dr Chui Tak-yi said. “We want to take action before these cases become significant, that’s why we are adding these areas.”

The Jordan testing area will be expanded to reach Nathan Road to the east, Austin Road to the south, Ferry Street and Canton Road, including Man Wah Sun Chuen, to the west and Kansu Street to the north. 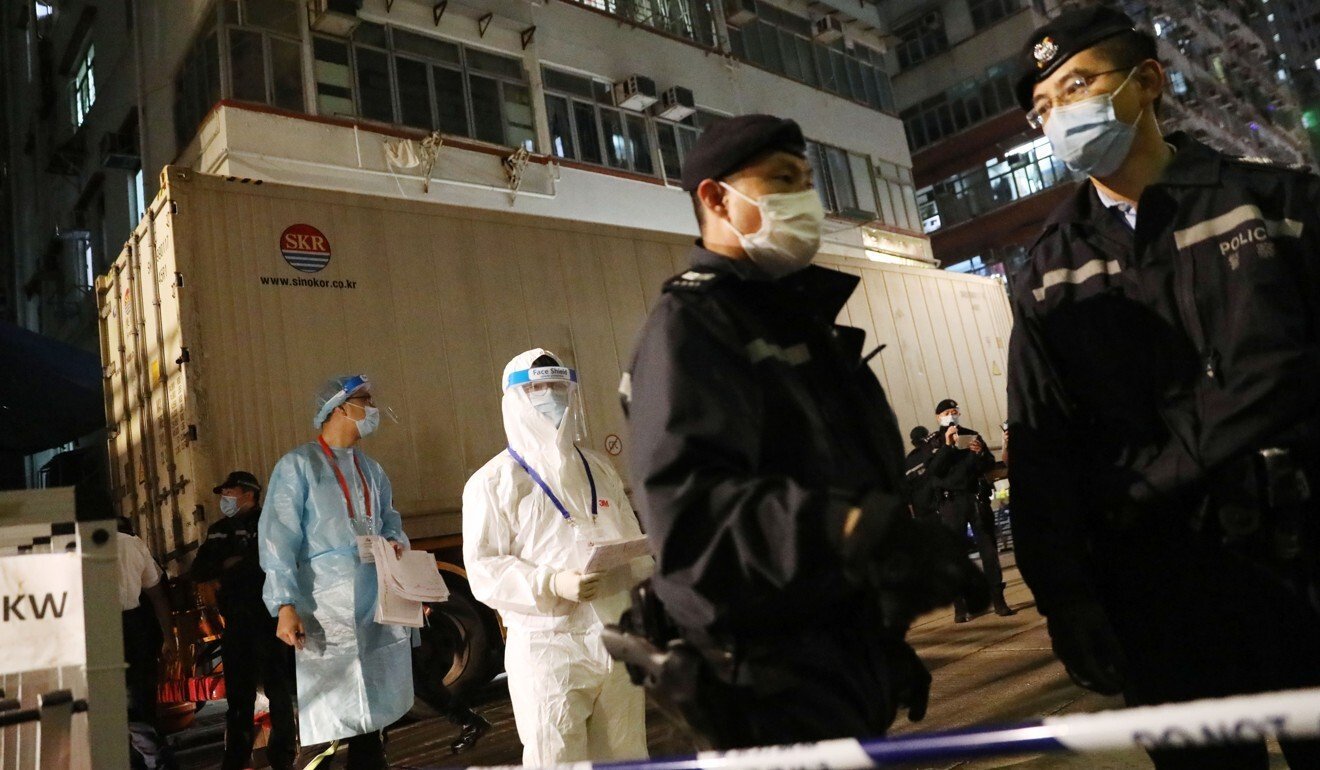 Police and government workers at the site in Yau Ma Tei after it was locked down at 7pm.

The government also announced it would extend existing social-distancing measures, which include a ban on public gatherings of more than two people, no dine-in services after 6pm, and the continued closures of some venues such as bars and beauty parlours, until February 3.

Of the 64 new cases, all but one were locally transmitted. The imported infection was from the United Arab Emirates. Among the local tally were 21 infections of unknown origin.

The city’s confirmed case total stood at 10,222, with 172 related deaths. More than 50 preliminary-positive cases were reported.

Lam had earlier hailed the 44-hour mandatory-testing exercise in Jordan at the weekend as a success, despite news of the operation leaking, allowing some residents to flee beforehand. But she said improvements for future action could be made in relation to their scope, duration and secrecy.

Pointing to Hong Kong’s population density, Lam said it had been very difficult for authorities to conduct testing with high levels of efficiency, given thousands of residents lived in some 150 multistorey buildings within a tiny area.

She also pledged to review the weekend’s screening exercise to see if the length of time residents were confined could be reduced.

Some health experts and critics had questioned the effectiveness of the unprecedented lockdown in Yau Tsim Mong, where only 13 coronavirus infections were detected among the more than 7,000 residents tested, or a 0.17 per cent positive rate.

The city leader responded by saying the operation had proved to be an effective tool and one her administration would deploy again.

Personal details of about 200 people who had not undergone screening during the lockdown were handed to the Centre for Health Protection, Lam revealed, noting the operation had been conducted under an “inefficient” framework as the government did not have residents’ data in each area, as in mainland China.

Meanwhile, a confirmed Covid-19 patient was found to have gone for a five-minute scan on Sunday at Caritas Medical Centre’s radiology department before two air purifiers had been installed as planned.

Chui said it was unclear why the devices were not installed on time on Saturday, but emphasised that the risks for 71 other patients who used the room the same day were low.

“The oxygen mask [the patient] wore fully covered up her mouth and nose, and the air breathed out was filtered, therefore the virus should be filtered up,” he said.

However, 10 patients were classified as “close contacts”, as they used the scanning room more frequently. A medical worker who helped the patient put on oxygen masks was also classified as a close contact. They would all undergo three virus tests and medical surveillance.

Dr Chuang Shuk-kwan, head of the Centre for Health Protection’s communicable disease branch, said there were no confirmed cases involving the Block 5 cluster at the private Laguna City housing estate in Lam Tin, where at least 10 infections were reported in the past two weeks.

A total of 78 residents from E flats had been sent to quarantine as of Tuesday night.

Citybase Property Management, which manages the estate, said it had reminded residents to fill U-shaped traps with water to ensure they functioned properly. It would also continue to monitor cleaning and disinfecting of common areas and facilities.

Chuang also said residents in Block R of Luk Yuen Sun Chuen in Tsuen Wan, and Yan Fu House in Tin Fu Court in Tin Shui Wai, would have to undergo mandatory screening after two infections in each.

Residents of Asian Building on Cheung Sha Wan Road and 241 Apliu Street in Sham Shui Po, Man Fai Building and 115 Shanghai Street in Jordan, Prospect Building in Mong Kok, and Cheong Lok Mansion in Hung Hom, which fall under the designated testing zones for buildings with just one case, would also have to get tested.

Kwun Tong district councillor William Li Wai-lam noted that almost 90 per cent of the residents living in Block 5 of Laguna City had been tested for Covid-19, considerably more than reported earlier.

Experts believed the coronavirus might be spreading vertically through pipes or light wells in a “chimney effect”.

Professor Yuen Kwok-yung, who advises the government on the public health crisis, said at the time the block, home to between 640 and 770 people, had seen just 463 residents complete mandatory testing.

But on Tuesday, Li clarified that Yuen’s figure covered only those who had gone to the testing centre, not the 160 others who used government collection packages to turn in their own specimens. Others had been screened at private hospitals or clinics, he added.

Authorities issued a partial evacuation order for Block 5 residents on Monday after the flurry of recent cases. Two security guards, one of whom lived on Reclamation Street in Yau Tsim Mong district, were among the infected.