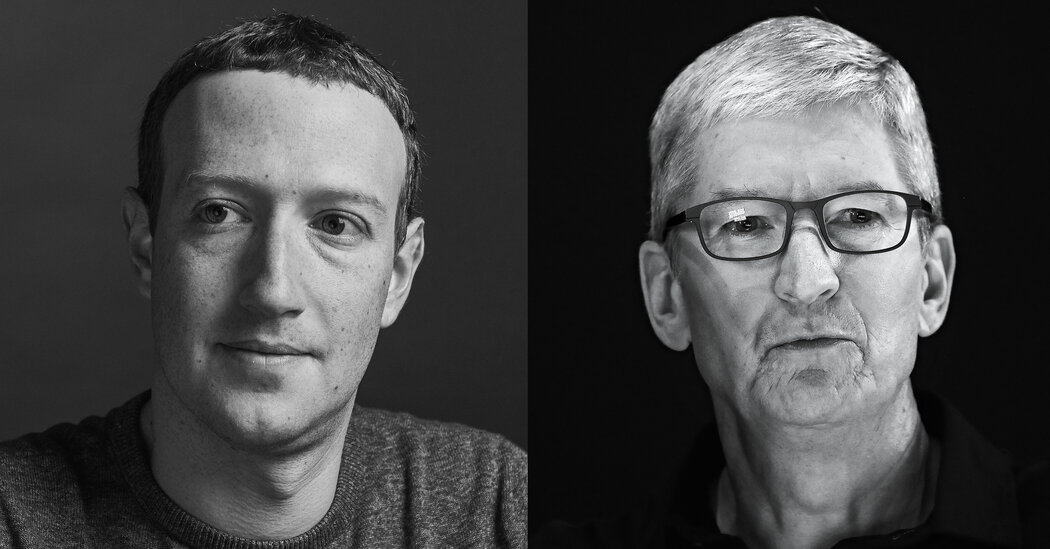 The tech C.E.O.s will appear together at a congressional hearing on Wednesday to argue that their companies do not stifle competition.
After lawmakers collected hundreds of hours of interviews and obtained more than 1.3 million documents about Amazon, Apple, Facebook and Google, their chief executives will testify before Congress on Wednesday to defend their powerful businesses from the hammer of government.

The captains of the New Gilded Age — Jeff Bezos of Amazon, Tim Cook of Apple, Mark Zuckerberg of Facebook and Sundar Pichai of Google — will appear together before Congress for the first time to justify their business practices. Members of the House judiciary’s antitrust subcommittee have investigated the internet giants for more than a year on accusations that they stifled rivals and harmed consumers.

The hearing is the government’s most aggressive show against tech power since the pursuit to break up Microsoft two decades ago. It is set to be a bizarre spectacle, with four men who run companies worth a total of around $4.85 trillion — and who include two of the world’s richest individuals — primed to argue that their businesses are not really that powerful after all.
And it will be a first in another way: Mr. Zuckerberg, Mr. Pichai, Mr. Bezos and Mr. Cook will all be testifying via videoconference, rather than rising side-by-side for a swearing-in at a witness table in Washington. Perhaps appropriately, their reckoning will be broadcast online.

“It has the feeling of tech’s Big Tobacco moment,” said Gigi Sohn, a former senior adviser at the Federal Communications Commission and a fellow at Georgetown University’s law school, referring to the 1994 congressional appearance of top executives of the seven largest American tobacco companies, who said they did not believe that cigarettes were addictive.

The hearing, which caps a 13-month investigation by the House subcommittee, will be closely watched for clues that could advance other antitrust cases against the companies. The Federal Trade Commission, for one, is preparing to depose Mr. Zuckerberg and other Facebook executives in its 13-month probe of the social network. The Justice Department may soon unveil a case against Google. And an investigation into Apple by state attorneys general also appears to be advancing.

As a result, preparations for the hearing have been frenetic — even with the event postponed by a few days this week to accommodate the commemoration of Representative John Lewis — as tech lobbyists jockeyed behind the scenes to influence the types of questions that lawmakers might ask.

At the hearing, which starts at noon on Wednesday, the 15 members of the antitrust subcommittee will have five minutes for each question. Representative David Cicilline, Democrat of Rhode Island and the chairman of the subcommittee, will control the number of rounds of questioning, potentially stretching questioning into the evening.

The length of the hearing may also be prolonged since the antitrust issues facing Apple, Facebook, Google and Amazon are complex and vastly different.

Amazon is accused of abusing its role as both a retailer and a platform hosting third-party sellers on its marketplace. Apple has been accused of unfairly using its clout over its App Store to block rivals and to force apps to pay high commissions. Rivals have said Facebook has a monopoly in social networking. Alphabet, the parent company of Google, is dealing with multiple antitrust allegations because of Google’s dominance in online advertising, search and smartphone software.

Democrats may also veer off the topic of antitrust and bring up concerns about misinformation on social media. Some Republicans are expected to sidetrack discussion with their concerns of liberal bias at the Silicon Valley companies and accusations that conservative voices are censored.

“There was an attitude these were great American companies that created jobs and that we should have a hands-off approach and let them flourish,” Mr. Cicilline said in an interview. “But there are a lot of serious issues we have uncovered over the course of the investigation that weren’t apparent when we first began investigating.”

For the chief executives, the hearing will be a test of how they perform under fire. Mr. Bezos, 56, has not previously testified to Congress, while Mr. Cook, 59, and Mr. Pichai, 48, have both testified once before. Mr. Zuckerberg, 36, the youngest of the group, has the distinction of being the veteran: He has answered questions at three congressional hearings in the past two years as Facebook has dealt with issues such as election interference and privacy violations.

But none are taking any chances for the event to go awry. Mr. Zuckerberg, who had been at his 750-acre estate on the Hawaiian island of Kauai, has been preparing for his testimony with the law firm WilmerHale, according to people with knowledge of the matter. And a small team is working with Mr. Bezos for his testimony in Seattle, said people with knowledge of the matter.

For weeks, the tech giants have also waged a lobbying battle to soften any blows. All four chief executives planned to call lawmakers on the House subcommittee in the days before the hearing, said three people with knowledge of the preparations who were not authorized to speak publicly.
Apple and Amazon also recently released studies to rebut claims of market dominance and anticompetitive practices. Last week, Apple publicized a study by a consulting firm called Analysis Group showing that the 30 percent commission it charges many apps for the right to appear on iPhones is close to what other platforms charge for distribution. The study left out that Apple helped popularize that 30 percent standard across the industry.

Amazon-funded economic consultants have in recent months argued that the e-commerce company’s business model, which is not grounded in selling ads like Google and Facebook, makes it less likely to violate antitrust laws. Last week, Amazon also released a report on small business, saying sales by third-party sellers grew 26 percent in the past year, outpacing Amazon’s own sales directly to consumers.

Google has said that the search and advertising tech markets that it dominates are changing fast. More than half of all searches for products on the internet originate on Amazon, Google’s lobbyists have said.

And Facebook’s Washington staff has pointed to competition from China, particularly from the popular video app TikTok, as evidence that competition in social media abounds. The Chinese-owned app is in the cross hairs of the Trump administration, which has threatened to ban it for national security reasons.

Big Tech’s rivals have also jockeyed to have their gripes brought up at the hearing, even if for just a few minutes. The House subcommittee has been flooded with proposed questions, documents and letters from the companies’ competitors, according to congressional staff and rivals.

Spotify, for instance, submitted questions about Apple’s dominance of the App Store. GreatFire, a China-based group, sent a letter with nine questions for Mr. Cook about Apple’s censorship of certain apps in China. Blix, a company whose email app competes with Apple and that is suing Apple in federal court for patent infringement, sent five questions to the subcommittee, including one on why Apple ranked its own apps ahead of rivals’ offerings in its App Store.

This month, David Heinemeier Hansson, the co-founder of Basecamp, a project-management tool, said he also briefed lawmakers on a recent public spat with Apple. Apple had denied Basecamp’s new email app from appearing in the App Store because it charged customers outside of Apple’s payment system. After Mr. Heinemeier Hansson complained publicly, Apple permitted the app with some minor changes.

The subcommittee’s members, who have already held five hearings about the tech giants, were informed and thoughtful during his briefing, Mr. Heinemeier Hansson said.

Even if the hearing results in more theater than substance, some said the greatest risk to the tech companies was increasing momentum toward regulations.

“The C.E.O.s don’t want to be testifying. Even having this collective hearing creates a sense of quasi-guilt just because of who else has gotten called in like this — Big Pharma, Big Tobacco, Big Banks,” said Paul Gallant, a tech policy analyst at the investment firm Cowen. “That’s not a crowd they want to be associated with.”
#Mark Zuckerberg  #Facebook
Add Comment