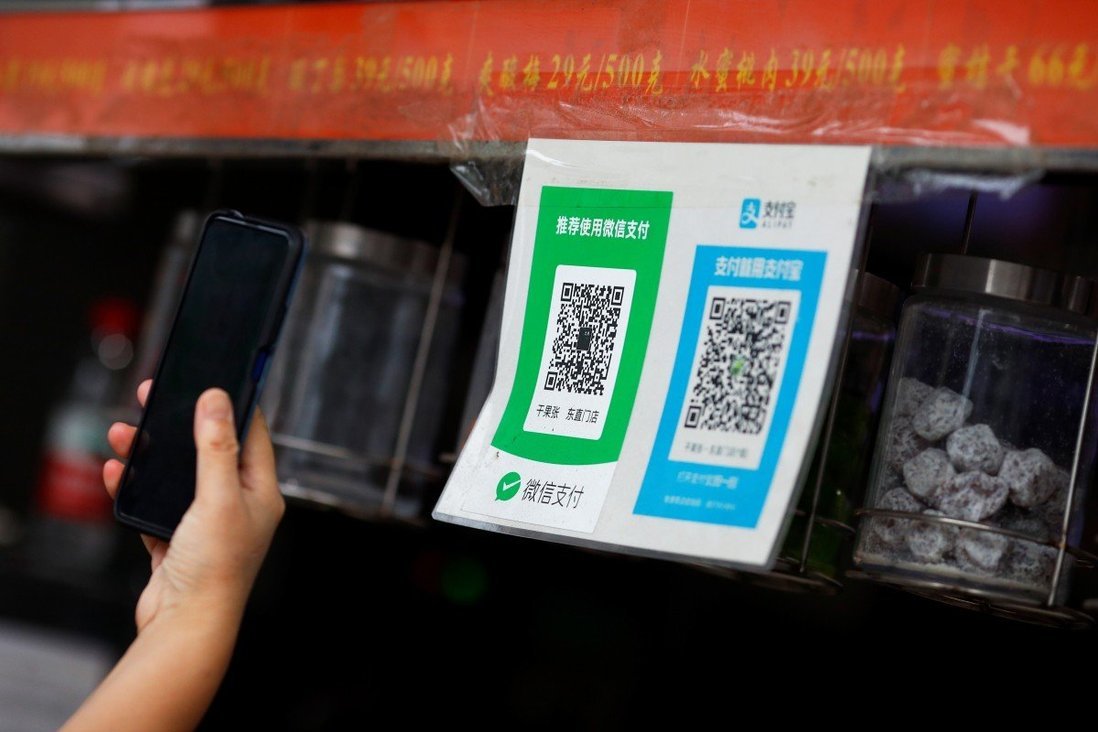 A new regulation drafted by China’s central bank, which seeks to determine whether nonbank institutions qualify as monopolies, has analysts and legal scholars pondering on the potential of Ant Group’s Alipay and Tencent Holdings’ WeChat Pay being subject to penalties or broken up.

The draft, which was published on Thursday to solicit public feedback through February 19, uses both “nonbank payment service market” and “nationwide electronic payments market” to refer to different markets. How the People’s Bank of China (PBOC) defines the terms could have far-reaching consequences for the future of China’s US$29 trillion e-payment market and the country’s two largest mobile payment service providers.

The new rules also put China’s central bank in an unusual position. Angela Zhang, director of the Centre for Chinese Law at the University of Hong Kong, said that it is “problematic” for the central bank to define a market in the context of antitrust regulation.

When deciding whether an institution qualifies as a monopoly, “the boundary of a market should be defined by antitrust regulators and the courts”, Zhang said. “In electronic payments, do you calculate market share by turnover or volume? It’s not that simple and easy.”

The central bank did not offer details clearly defining the market. But according to the bank’s quarterly payment reports, the “turnover of e-payments handled by nonbank payment institutions” totalled 264 trillion yuan (US$40.8 trillion) in the 12 months through June 2020. Alipay handled 118 trillion yuan in payments in China during the same period, according to the October initial public offering prospects from Ant Group, an affiliate of Alibaba Group Holding, the owner of the South China Morning Post.

If Ant’s numbers are part of the PBOC’s calculations, that would give Alipay 44.7 per cent of China’s nonbank e-payment market. WeChat Pay does not publish its payment volumes, but Beijing-based consultancy Analysys estimates that the value of the service’s total payments is about 70 per cent that of Alipay. However, WeChat Pay handles a larger number of transactions.

Article 56 deals with the “nationwide electronic payments market”. The article stipulates that any nonbank service provider controlling half of this market could qualify as a monopoly. This also applies to two entities with two-thirds of the market or three providers with three-quarters of the market.

As in the previous article, the PBOC did not clearly define the market. However, according to the bank’s quarterly payment reports, China’s total electronic payments market turnover was 2.6 quadrillion yuan. If this figure is used, Alipay’s 118 trillion yuan transaction volume would account for less than 5 per cent of the whole market, far from the proposed monopoly redlines.

How broad or narrowly a market is defined can greatly impact a firm’s perceived market power. In smartphone mobile payments, for example, Alipay had 55.4 per cent of the market in China as of June 2020 and WeChat Pay had 38.5 per cent, according to Analysys. The markets specified by the PBOC appear to cover more than just mobile payments.

Liu Cheng, a partner at the law firm King & Wood Mallesons who is experienced in antitrust law, said the central bank is sowing confusion by adopting two different terms for measuring market share.

“The two seem to be two different things. What do the terms mean exactly, and how to define them?” Liu said. “It’s debatable whether [the central bank] can define a market. In fact, a better approach is … to leave the job to antitrust regulators and antitrust courts.”

While it is unknown what effect the new regulation might have on Alipay or WeChat Pay, industry insiders said the central bank is sending a strong message that it is looking to give its antitrust regulations more teeth in its fight against Big Tech’s expansion in financial services.

A Beijing-based antitrust lawyer, who declined to be named because he is not allowed to speak publicly on the matter, said that although the central bank does not have its own antitrust law enforcement authority, it is using enhanced regulations to threaten antitrust action through other authorities.

According to the draft rules, the PBOC can report suspected monopolistic practices to China’s antitrust authority and ask it to decide whether certain entities have built up dominant market positions. The central bank can also ask regulators to take corrective measures, including suspension of service, vetoing merger plans that produce monopolies, or “carving up nonbank payment institutions”, according to the draft regulation.