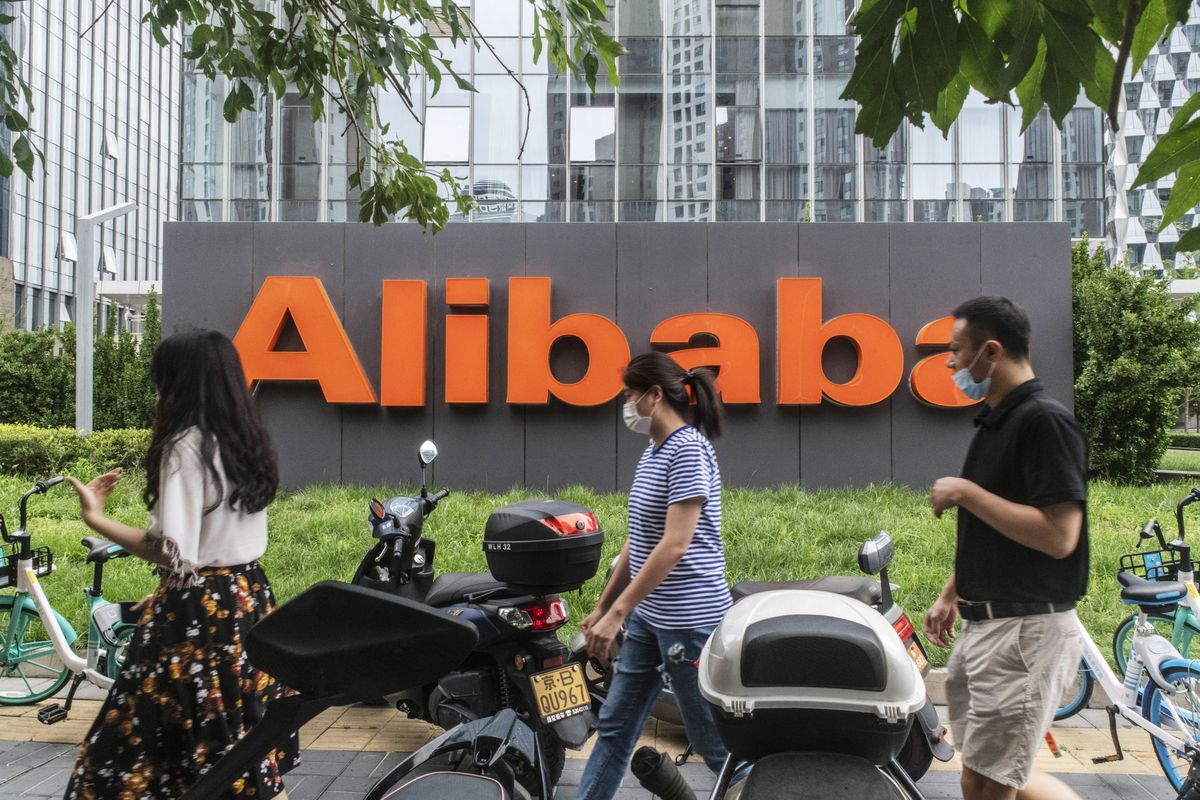 Temasek Group Holdings Pte., Baillie Gifford & Co., and Matthews Asia are among the major shareholders that have swapped stakes in the Chinese e-commerce giant to take advantage of new rules easing the switch following Alibaba’s listing in Hong Kong last year. Geopolitics is contributing to the shift, according to people familiar with the moves.

“Lots of long-term fund managers, especially the ones whose fund managers are based in Asia, are switching or considering switching from ADRs into Hong Kong-listed shares,” said Nelson Yan, head of offshore capital markets investment at Creditease Wealth Management (Hong Kong) Ltd., referring to American Depositary Receipts. “Demand for these ADRs in the U.S. is now clouded by the politics.”

The Alibaba stock shifts are a sign that the Trump administration’s fierce rhetoric against Chinese tech firms is prompting investors to take steps to avoid the potential fallout. At the same time, as Chinese companies seek more dual listings in Hong Kong, the moves threaten to drain liquidity of the New York shares.

Baillie Gifford, whose partner and portfolio manager James Anderson told Bloomberg Television in March that Alibaba could become a $2 trillion company, swapped 10.4 million U.S.-listed shares worth about $2.67 billion in the second quarter. That’s about a fifth of its stake, and is the biggest change since it first bought shares in 2014.

The money manager, among Alibaba’s largest shareholders, converted the stock to the Hong Kong-listed shares, according to a person familiar with the move. A spokesperson for the Edinburgh-based firm declined to comment.

A spokesman for Singapore’s state-owned investor Temasek confirmed that it swapped half of its stake representing 12.1 million shares -- worth about $3 billion -- from the U.S. to Hong Kong, declining to comment further.

The issue has been top of mind for many institutional investors since May when the Senate overwhelmingly approved S.945 -- a bill that could lead to Chinese companies being barred from listing on U.S. exchanges. Conditions include being able to certify that they aren’t under the control of foreign governments and allowing the Public Company Accounting Oversight Board to audit the business.

Matthews Asia, which manages about $23.4 billion, divested almost three quarters of its U.S. Alibaba shares in the second quarter, worth about $700 million. Much of that is now held in H-shares in Hong Kong and in its Pacific Tiger Fund, whose lead manager is Sharat Shroff.

Keywise Capital Management, which oversees $1.5 billion for global investors including sovereign wealth funds and endowments, plans to invest in the Hong Kong shares of dual- listed Chinese companies, said founder and Chief Investment Officer Zheng Fang. The increased U.S. scrutiny of Chinese ADRs has led to investor concerns about the potential risks of holding these securities, he said.

The Hong Kong shares may also get a boost from MSCI’s plan to reduce the Chinese ADR weightings in its indexes, while raising Hong Kong stocks, he said. Once listed in Hong Kong, those companies may be included in the stock connect scheme with China, allowing them to attract support from mainland Chinese investors, he added.

Myriad Asset Management, the hedge fund firm led by Carl Huttenlocher, also swapped most of its Alibaba ADRs for Hong Kong shares, said a person with knowledge of the matter. With more of Alibaba’s peers listed in Hong Kong, it’ll become easier to compare valuations and do hedged trades, the person said.

The stock moves are already boosting Aliababa’s trading in Hong Kong. On a 50-day moving average basis, Hong Kong’s daily turnover now accounts for about 17% of the company’s total trading, up from a low of 13% in early June. 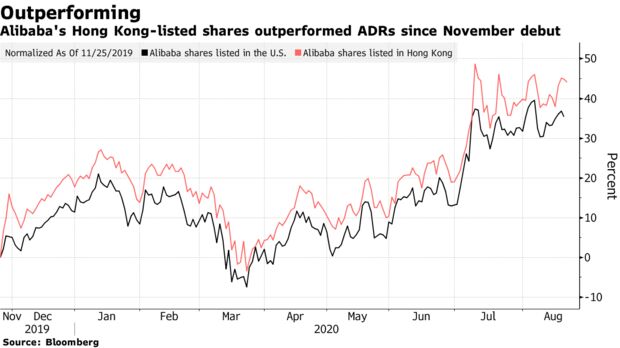 Investors in the Hong Kong shares have been rewarded, with the stock gaining 45% since the November listing, compared with a 35% jump in the U.S. stock over the same period in local currency terms. The Hong Kong shares may attract even more institutional investors when Alibaba joins the Hang Seng Index on Sept. 7

“The majority of its shares are still in the U.S., but the relocation is already happening and that’s driven by long-term holders,” said Kenny Wen, Hong Kong-based strategist at Everbright Sun Hung Kai Co. “In the very long run, we can’t exclude the possibility for Hong Kong to become the primary listing place for Alibaba.”