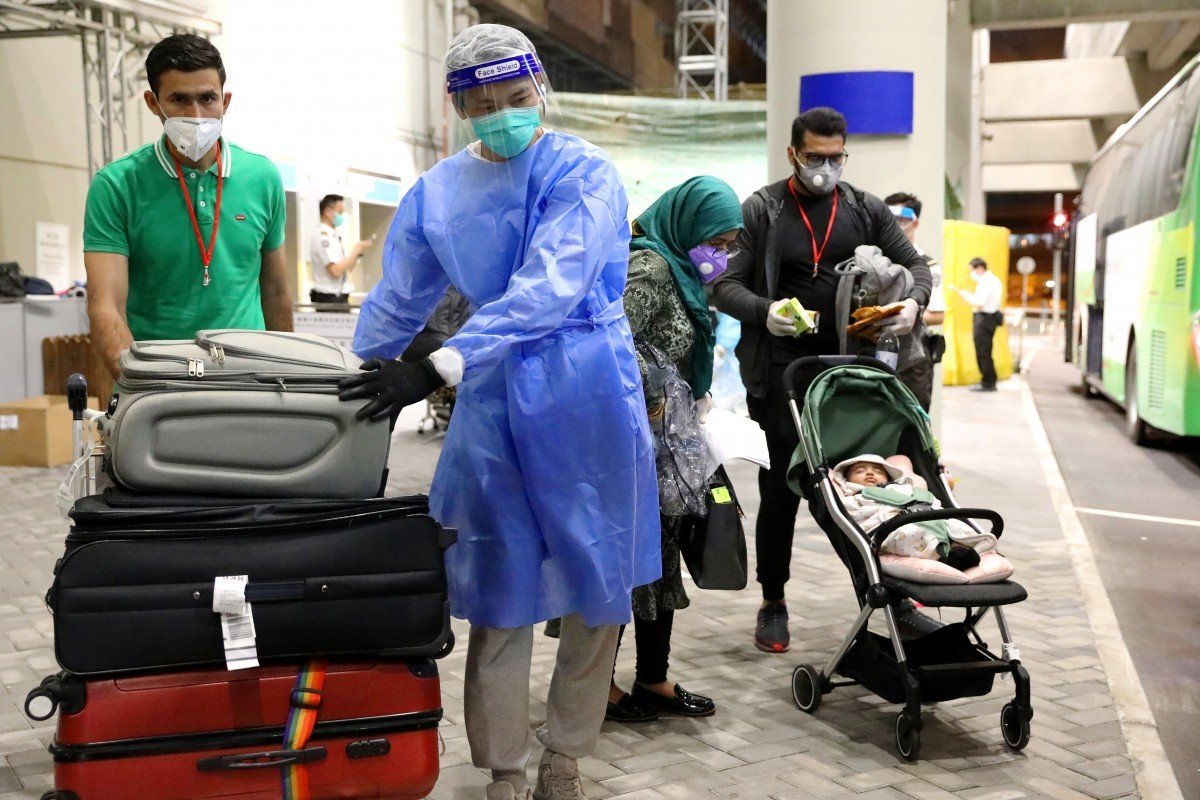 Local health officials have classified Pakistan, India, Nepal, Bangladesh and South Africa as high-risk due to their low testing rates. There are an estimated 5,000 Hongkongers in India alone now waiting for flights back to the city
Hong Kong will require thousands of air travellers flying from high-risk countries such as India and Pakistan to produce certificates showing they have tested negative for Covid-19 before they arrive, two sources have told the Post, as the city confirmed 38 new cases on Friday, with 32 local infections among them.

The planned air-travel restrictions come as the government is drafting tighter measures to weed out imported coronavirus patients amid a third wave of local infections, which is stretching hospital and quarantine facilities thin.

Friday’s numbers add to the 34 local cases reported on Thursday and 19 on Wednesday. The city’s overall tally now stands at 1,403 cases.

Speaking at a daily press briefing, Dr Chuang Shuk-kwan, head of the Centre for Health Protection’s communicable disease branch, said she understood “the arrangement for high-risk travellers going back to Hong Kong is being discussed but has not yet been implemented”.

There are an estimated 5,000 Hongkongers in India alone, representing the vast majority of residents waiting for a flight back to the city. Separately, an estimated 12,000 domestic helpers and 10,000 overseas university students are expected to add to that number.

The Hong Kong government on Tuesday said it would begin talks with the consulates of countries it deemed high-risk. Health officials have classified Pakistan, India, Nepal, Bangladesh and South Africa as high-risk due to their low testing rates.

Hong Kong resident Amit Rawat, 35, flew to India over the Lunar New Year in late January with his six-year-old son and wife Sarjoj, who is four-months pregnant. They planned to stay in Noida, outside Delhi, for a holiday but were left stranded after the government locked down the nation in March.

His wife has missed several doctor’s appointments in Hong Kong, and Rawat is reluctant to take her to a local hospital citing infection risks. The Hong Kong government arranged four chartered flights for residents stuck in India in May and June, bringing back about 850 people.

“It has been a month since the last evacuation flight. We just do not know when the next one will be,” the digital marketer said.

Rawat asked for clarity from the Hong Kong government on the new testing requirement.

“What will the time frame be?” he said. “For example, if I got a Covid-19 test today in India, I might get a result in one or two days. So what is the exact timeline the Hong Kong government is looking for? Will they accept a result that is a week old? That is a real concern for Indians who are stranded at the moment.”

One of the biggest concerns regarding inbound travellers is Hong Kong’s limited quarantine centre capacity. Authorities now have four facilities with 2,422 units, with each typically accommodating one to three people. Through Friday, about 45 per cent units were occupied.

Government officials last month said that Chun Yeung Estate in Fo Tan, which accounts for 72 per cent of quarantine centre capacity, would cease operations by the end of July and be returned to its intended use as public housing.

But new quarantine units are on the way. Ninety-nine units have been built at the Sai Kung Outdoor Recreation Centre, and another 1,500 at two sites at Penny’s Bay on Lantau Island are to be completed gradually between this month and September.

So far, authorities have avoided stricter air travel measures such as reducing the number of flights that carriers operate or capping the total number of arrivals. Under the Basic Law, the government cannot deny a Hong Kong resident entry.

Those flying into the city to work aboard ships are required to produce negative Covid-19 test results from their last destination, taken within 48 hours of their departure. Their shipping company or agents must validate the results in a “guarantee letter”, and crew members must present the test results and letter to the Department of Health upon arrival in the city.

Dr Ho Pak-leung, an infectious disease expert at the University of Hong Kong, said the rising number of infections worldwide made it necessary to require air arrivals to produce negative virus test results.

“If there is a high ratio of passengers infected with the virus on every flight, quarantine facilities and the hospitals system would soon break down,” Ho said. But the government should specify the testing method and list institutions it would recognise as authoritative. “For example, India does a lot of antigen testing [for Covid-19] … which produces many more false negative results,” Ho said.

A better option would be to require the more accurate Polymerase Chain Reaction test for their certificates. It detects the presence of the virus by amplifying the virus’ genetic material to a point where it can be detected by scientists.

Mainland China previously took the unprecedented step of restricting flights to one weekly passenger flight per route, per airline, as it sought to stem the rush of returnees seeking safe haven as infections spiked in Western countries.

The Australian government, meanwhile, on Friday said it would slash the number of citizens allowed to return to the country by 50 per cent – to 4,000 per week – as the country’s second-largest state, Victoria, battled a fresh outbreak that has forced Melbourne to order 5 million residents to stay at home for six weeks.

Sydney Kingsford-Smith, the nation’s busiest airport, this week restricted international passenger arrivals to 450 a day and 50 per flight, with quarantine facilities left stretched.

New Zealand’s government has also ordered airlines to reduce the number of international arrivals coming into the country as it tries to ensure its quarantine facilities are not overwhelmed.