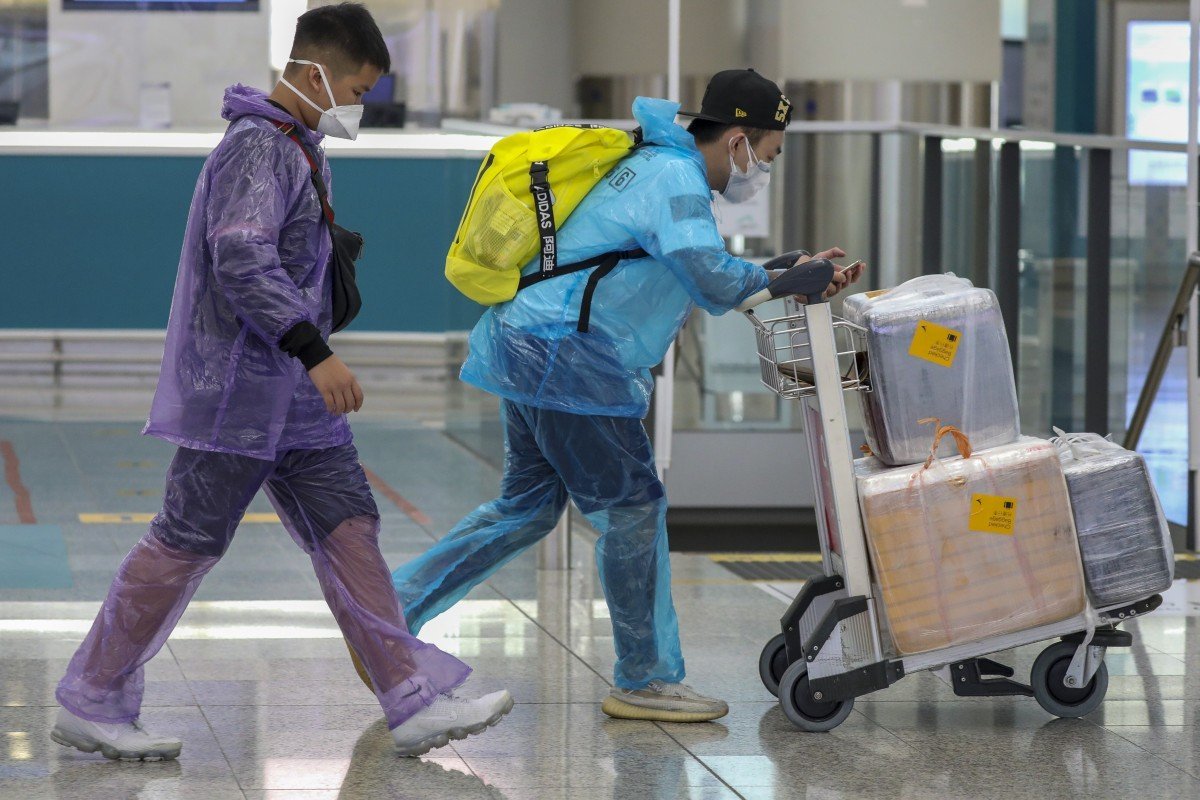 Coronavirus: after Singapore and Taiwan close borders, calls for Hong Kong to do the same

Pressure was on Sunday mounting for Hong Kong to follow Singapore and Taiwan in closing its borders on all non-residents as it reported 44 new coronavirus infections, the second-highest single-day spike since the outbreak began.

Of the newly confirmed cases, 29 involved travellers returning from North America, Europe and Asia, including seven students. There were also cases with unknown chains of transmission, raising fears of possible community outbreaks.

The flurry of diagnoses took the city’s confirmed infection tally to 317, with four deaths.

The Hong Kong government also revealed on Sunday night that police were investigating 41 cases of quarantine violation, including five people who could face prosecution for leaving their confinement without permission or removing their tracking wristbands.

While the five people had been found, police were still tracking down the other 36, who left their designated address without approval.

A top medical expert warned that the number of infections could reach 1,000 in the next few weeks unless drastic measures were taken.

Dr Leung Chi-chiu, chairman of the advisory committee on communicable diseases at the Hong Kong Medical Association, said the city could reach a “point of no return”. He urged the government to ban non-residents from entering without compelling reasons.

Earlier in the day, Singapore announced just that. Starting at 11.59pm on Monday, the Lion City will ban all short-term visitors from entering or transiting through it. Even foreign work pass holders will not be able to re-enter the country, except those who provide essential services such as health care, as well as their dependants.

The country’s National Development Minister Lawrence Wong, tasked with containing the spread of the disease, said closing the border was a hard decision for a small, open economy such as the city state. But he said it was necessary given the risks of imported cases and the scarcity of valuable medical resources.

Another regional transport hub, Taiwan, also shut its doors to all non-citizens.

Asked if Hong Kong would follow Singapore’s lead, a government spokesman replied in a statement that it needed to conduct a “thorough risks assessment” first.

“The assessment will take into account factors such as the number, distribution and rate of increase of infected persons, measures put in place for surveillance and control of the outbreak, and the frequency of visits by Hong Kong residents,” it said.

Since last Tuesday, when Hong Kong first announced that all non-residents – except those from Macau and Taiwan – would be put under a 14-day home quarantine, the city has reported 90 imported cases. Over that six-day period, the health authorities also identified 45 cases that may “possibly be local”, although they could not ascertain the chains of transmission.

Dr Joseph Tsang Kay-yan, another local infectious disease expert, supported the idea of barring non-residents from entering. He said the city’s public health system could collapse if there were more than 800 infections.

The daily number of non-resident arrivals has dropped from 2,800 to about 600 since Hong Kong introduced the 14-day home-quarantine measure. But Tsang said more needed to be done.

“The government must come up with plans to further lower the number of non-resident arrivals from the current 600 or so. There are still other ways to do it, even without a total ban,” he said.

“For instance, the authorities can consider requiring all visitors to present health certificates before allowing them in.”
Gabriel Leung, an epidemiologist and dean of medicine at the University of Hong Kong, said viral tests on saliva samples from airport arrivals should cover those aged 60 or above, and people returning from Europe and North America, even if they have no symptoms.

“You can simply distribute empty bottles to all travellers who have been to Europe and North America … the results will be out in 24 hours or 48 hours,” he said. “This would be better than knowing nothing at all [about whether people are infected].”

Hong Kong is one of the few places in the Asia-Pacific region yet to introduce a blanket travel ban.

Vietnam’s Prime Minister Nguyen Xuan Phuc on Saturday issued a directive that banned all foreigners from entering, and suspended flights carrying foreign passengers. Australia and New Zealand also closed their borders to any foreigners who are not permanent residents, while Malaysia banned visitors and imposed a partial lockdown until the end of March to restrict the movement of its residents.

In mainland China, the central government announced all international passengers heading to the capital Beijing would be redirected to 12 designated entry points scattered across the country. They would be quarantined for 14 days, and be allowed to continue to Beijing only after testing negative.

Chinese authorities said the measures were necessary because Beijing had become a top destination for imported cases on the mainland, reporting 13 such new cases on Sunday.

To prevent similar imported cases, the Hong Kong government has set up a temporary test centre at AsiaWorld-Expo, near the airport. Officers have been carrying out Covid-19 tests on arrivals who show upper respiratory symptoms or have a fever.

Tsang said these people needed to be tracked and to take further tests later, even if their first tests come back negative, because the coronavirus had an incubation period of 14 days or longer.