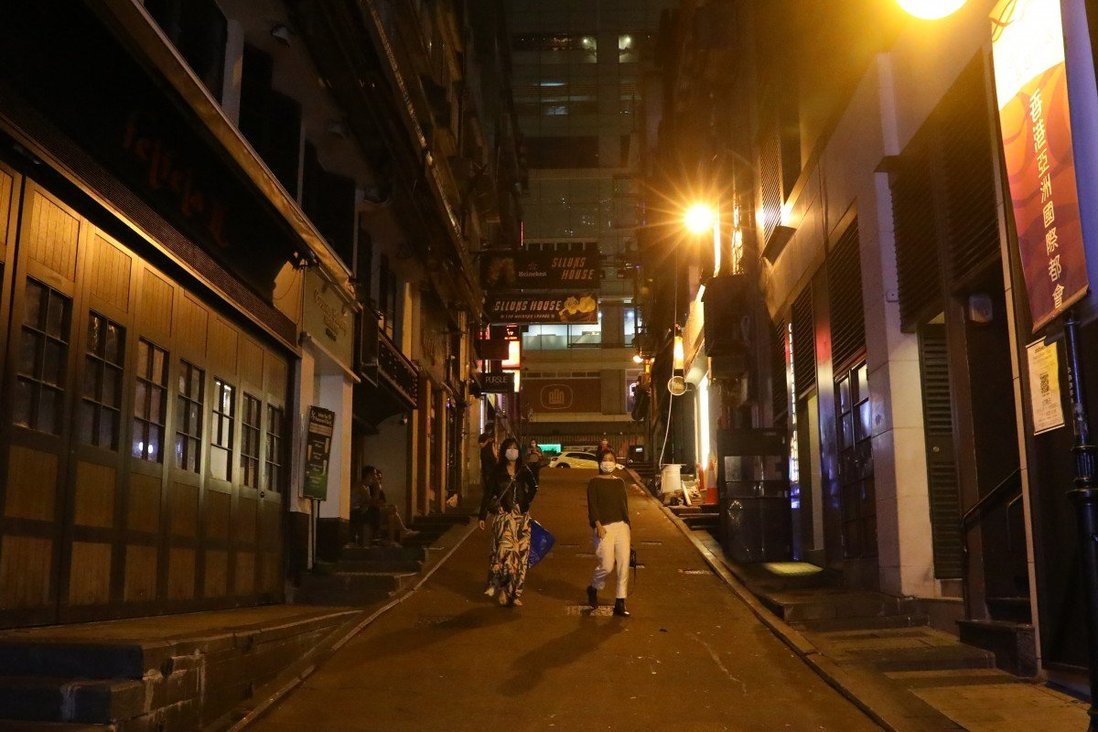 About half of Hong Kong’s bars could go out of business under the ravaging impact of the Covid-19 pandemic, affecting almost 100,000 people employed in the sector, according to industry players.

Bars, pubs and nightclubs have been ordered to close between November 26 and December 15, marking the third round of restrictions this year, amid social-distancing rules to curb the raging fourth wave of coronavirus infections. But bars with catering permits, mainly those within restaurants and hotels, can stay open.

Wing Chin Chun-wing, vice-president of the Hong Kong Bar & Club Association, said the order to shut bars and nightclubs again would affect some 100,000 workers employed as bar staff, suppliers, bouncers, overnight taxi drivers and in many other roles.

“December is normally one of the industry’s busiest seasons. Once, the overall revenue during Christmas and New Year peaked at HK$3 billion [US$387 million],” Chin said, referring to earnings in 2016. “If the closures are extended to the end of the month, that means we don’t get any revenue at all.”

“If that were to happen, roughly half of the city’s bars would have to go out of business,” Chin said, referring to some 1,400 businesses that operated only as a bar.

He also added that 120 bars were shut for good recently, putting some 1,800 people out of work.

According to the Food and Environmental Hygiene Department, Hong Kong has more than 8,300 licensed liquor premises, including bars, pubs, nightclubs and restaurants.The Licensed Bar and Club Association of Hong Kong charter president Ben Leung Lap-yan said the chamber accidentally discovered about a month ago that one in every four bars or pubs were no longer operating when its staff started conducting site visits to encourage them to install the government’s contact-tracing app.

Public and private venues have been asked to install the “Leave Home Safe” app, which records visitors’ presence as a tool to trace their whereabouts amid the pandemic.

“At the beginning of this year, there were 1,400 licensed players, but when we visited districts such as Tsim Sha Tsui, Central and Prince Edward, many have shuttered,” Leung, also the owner of Barbe Bar in Tsim Sha Tsui, said.

“Even if the outbreak dies down by the middle of this month, and if we are allowed to resume some operations, I don’t think there is any chance to see a rebound in our business in December.”

Health authorities warned on November 20 that Hong Kong entered a fourth wave of infections which stemmed from a dance club cluster that has now snowballed to more than 600 cases. Hong Kong on Friday confirmed 112 new coronavirus cases, taking its infection total to 6,701, with 111 related deaths. 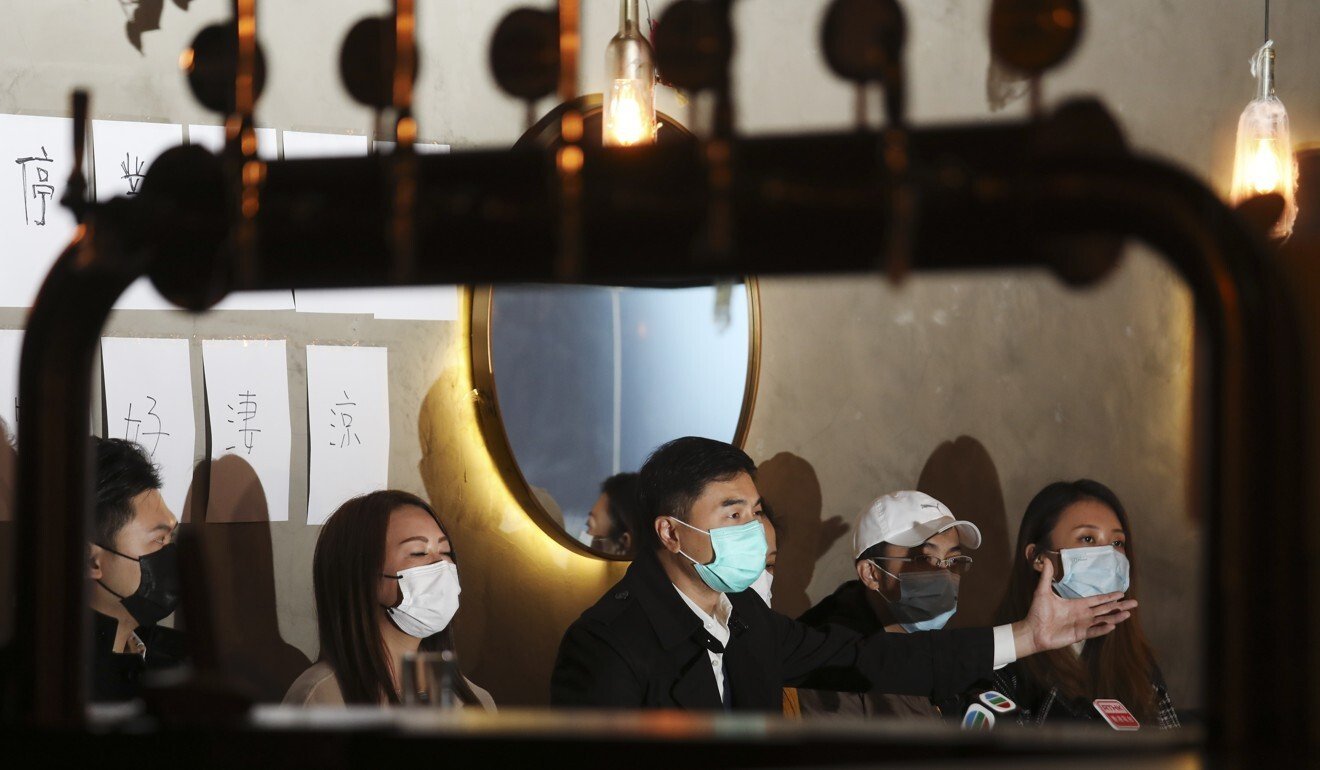 Representatives of Hong Kong’s bar industry at a press conference in Mong Kok.

Leung said a fresh wave of business shutdown started from December 1, after the government’s HK$81 billion (US$10.4 billion) wage subsidy initiative – Employment Support Scheme – ended on November 30. During the six-month subsidy period, beneficiary companies were banned from firing any workers. The association had about 500 members, he added.

“Without any income and subsidy, there is no way bars and pubs can survive because operators still need to pay for other fixed costs such as rent and wages,” he said.

Bartenders are also in the same boat.

Cat Hou Chui-shan, chairwoman of the Bartenders and Mixologists Union of Hong Kong, said the dreaded bar closures were expected and workers in the industry had no choice but to “face the reality”.

“I’m actually supposed to be working as I speak to you over the phone, but I have nothing to do as the restobar I work for is completely empty right now,” Hou told the Post on Friday night, generally a peak time to serve customers.

“We’re worried that the business would shut down because of financial problems,” she said.

She added that about 20 per cent of bartenders and mixologists in the city had been made redundant so far this year, with only 1,000 people remaining in the industry. Even among the existing workers, about one-third has been forced to suspend work because of the temporary closure of bars and pubs.

Hou said the industry would have some hopes of a revival only after a vaccine was available, which the government said would be in the second half of next year.

To rescue the bar and pub industry, Leung said the association had engaged a scientist to come up with a public health solution to boost consumer confidence.

Restaurant takings already sank to a record low in the third quarter, slumping 35.3 per cent year on year as Hong Kong’s catering sector took a massive hit from sweeping social-distancing rules between July and September.

Bars suffered the most as total receipts plunged 62.7 per cent year on year to HK$133 million (US$17 million) during the third quarter when pubs were ordered to close from July 15 to September 17.

Unemployment in the retail, accommodation and food service sector also hovered at 11.2 per cent in the three-month rolling period between August and October.