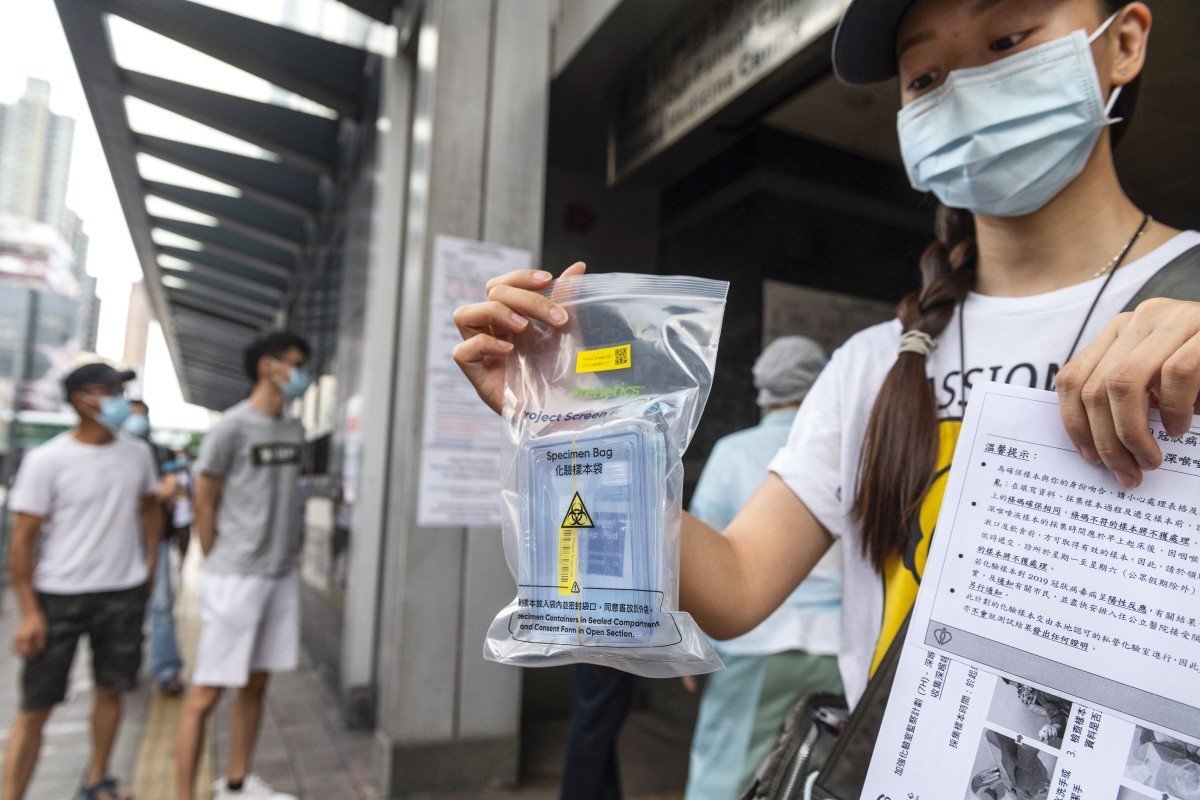 Scheme, which is open to all of Hong Kong’s 130,000 school staff, begins on Monday and is expected to run until January.

bout 50 schools a day are expected to have staff tested for Covid-19 under a new voluntary screening programme that starts in Hong Kong next week.

The city recorded three new Covid-19 cases on Wednesday and its first virus-related death in more than a month. Two of the new infections were linked to a growing Covid-19 cluster involving a staycation holiday in Mui Wo. The third was imported and involved a domestic worker arriving from India.

A man, 70, who had battled the virus for nearly three months died in the morning.

The testing scheme for teachers and staff at kindergartens and primary, secondary and special schools starts on Monday. Secretary for Education Kevin Yeung Yun-hung said he expected about 50 schools to take part each day.

“Having more people in a school getting tested is a way to protect students,” said Yeung, who stressed staff would not be forced to join.

“There is no pressure on teachers. We don’t need to know which teachers join. We are not planning to compare participation rates between schools.”

Yeung expected the programme would run until January, taking into account the holidays. The Education Bureau said testing would be offered to all of the city’s 130,000 school staff.

Seven infections have been linked to the cluster, which includes some people who had spent time at the Seaview Holiday Resort in Silvermine Bay from October 25 to 27.

Specimen bottles for Covid-19 testing would be distributed in Mui Wo and Tai Wai, where an infected mainland Chinese woman was suspected to have worked as a prostitute during her incubation period.

Bottles would also be handed out to bars on Hong Kong Island and in Kowloon over the coming two weekends.

Since the start of October, more than 8,300 bottles had been given out to bars and pubs and about 5,400 collected.

As of Wednesday, the city had confirmed 5,348 infections, with 106 related deaths.

Dr Ho Pak-leung, a microbiologist from the University of Hong Kong, urged the government to consider setting up vending machines at major MTR stations to distribute specimen collection kits for Covid-19 testing.

Meanwhile, demand for hotel rooms was expected to rise as arrivals from everywhere other than mainland China, Macau and Taiwan would need to quarantine for 14 days in a hotel from next Friday. The health authorities on Tuesday announced the change to cut home quarantine transmission risks.

Michael Li Hon-shing, executive director of the Federation of Hong Kong Hotel Owners, which represents more than 100 properties, said around one-third of its members would take in arrivals. He called on the government to provide timely support for hotels if any guests turned out to be infected.

“The government response currently is slow and some officers are hard to reach,” Li said.

Dr Leung Chi-chiu, a specialist in respiratory medicine, said hotels should be designated for quarantine to avoid cross-infections. “People quarantining there should not have any contact with each other. If there is any cross-infection, the 14-day quarantine will be meaningless,” he said.

Separately, customs seized about 100,000 suspected fake N95 respirators, with an estimated market value of about HK$3 million (US$384,615), in a raid on a logistics firm in Kwai Chung on Tuesday. They were intended to be transshipped overseas via Hong Kong.

A similar amount of medical-grade masks were also seized last Wednesday in a separate case. Two people were arrested in total over the cases.