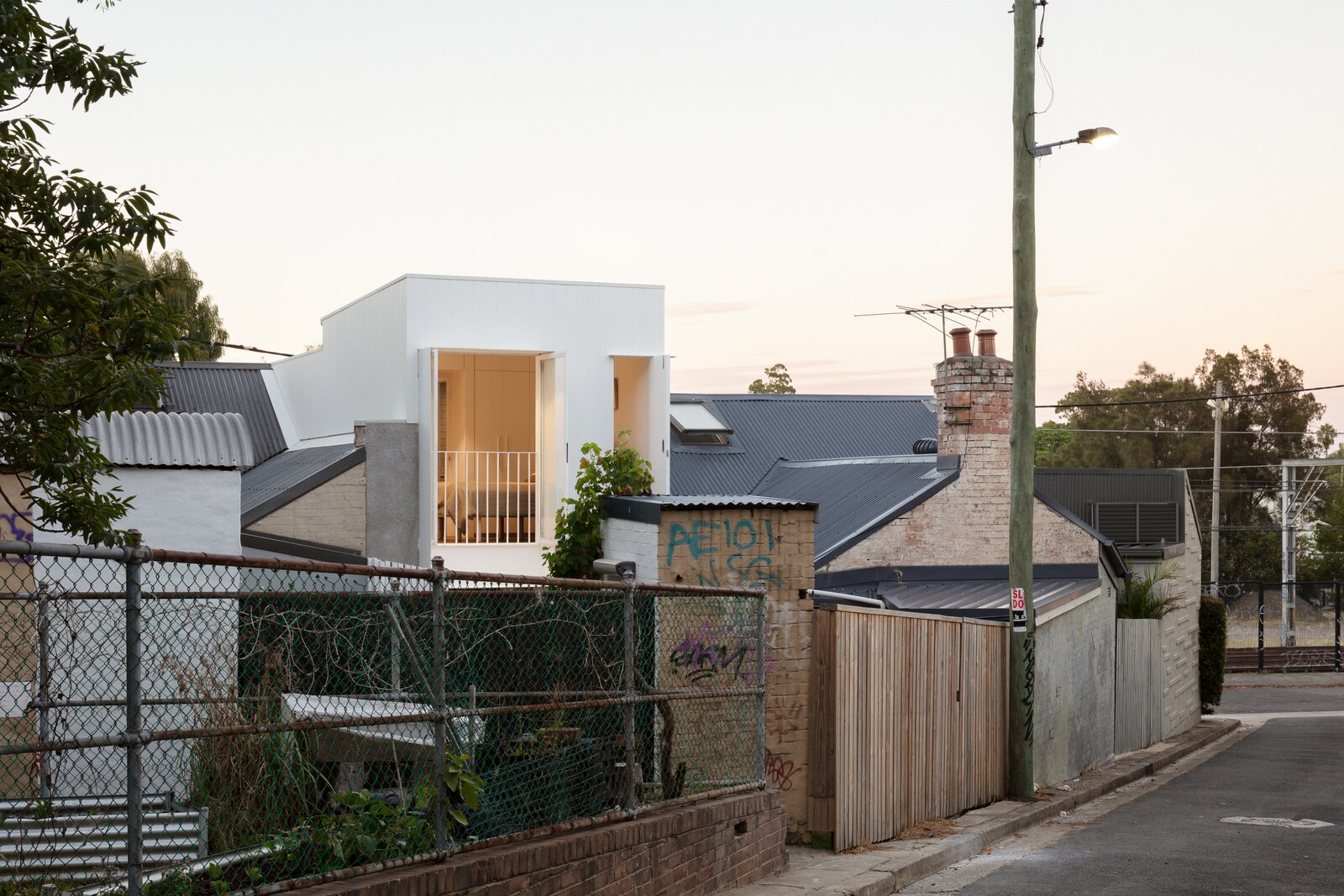 A Luminous Micro-Home Peeks Above the Rooftops in Sydney

This Australian home feels larger than its 645 square feet thanks to white walls, plenty of outdoor connections, and loads of natural light.

When a young couple approached Sydney, Australia–based design firm Architect George about renovating a dark and dated single-story home on a narrow lot in the suburb of Newtown, they challenged the architects to create a comfortable, light-filled two-level home that connects to nature. "The house occupies one of the smallest and most awkward sites you could come across as an architect," says Dean Williams of Architect George. "But it benefits from great sunlight and proximity to a community park and garden, and urban amenities." 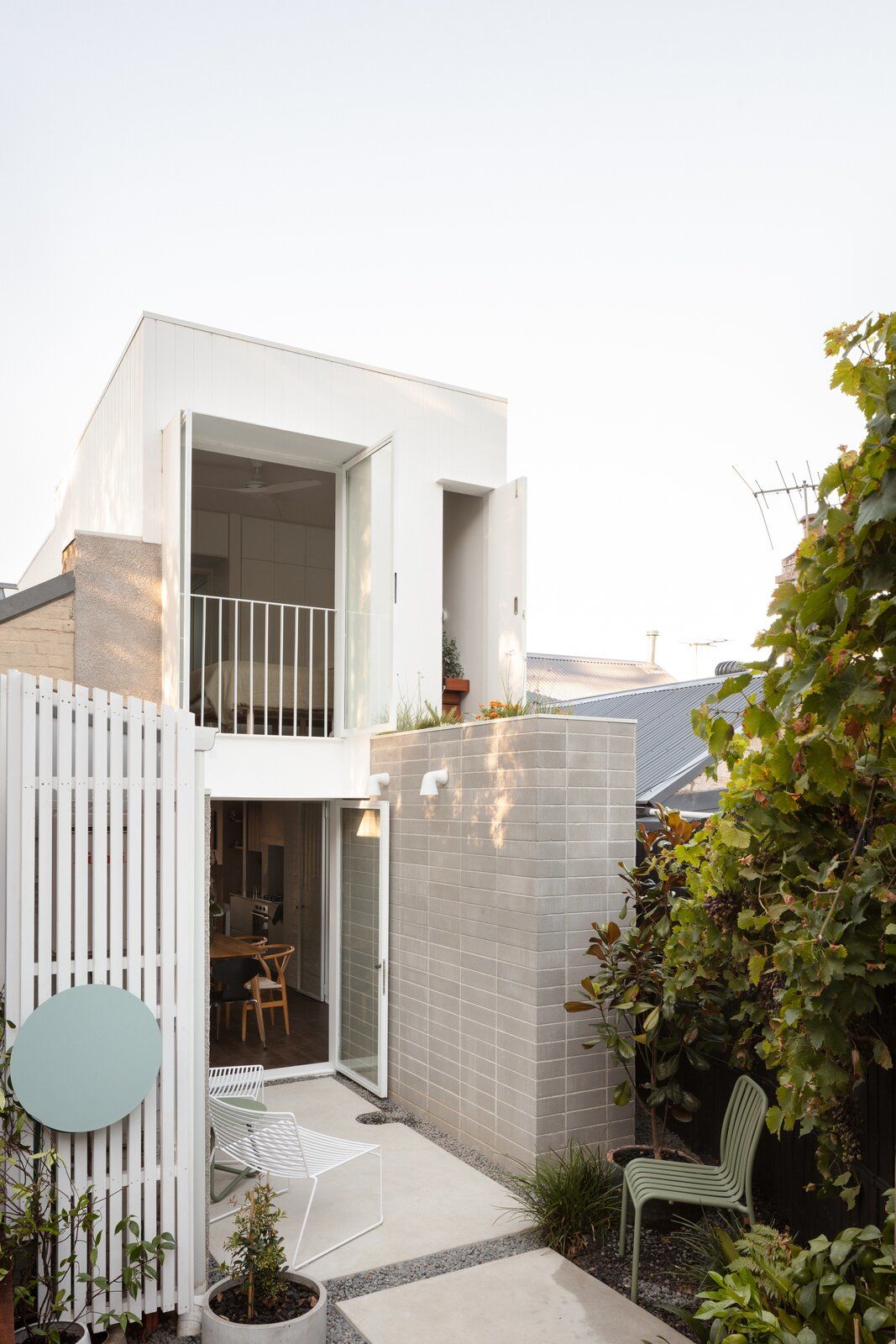 The micro-home that Architect George designed for a young couple in Newtown, Sydney, Australia, features a greenery-filled courtyard that ties the interior of the home to the outdoors. 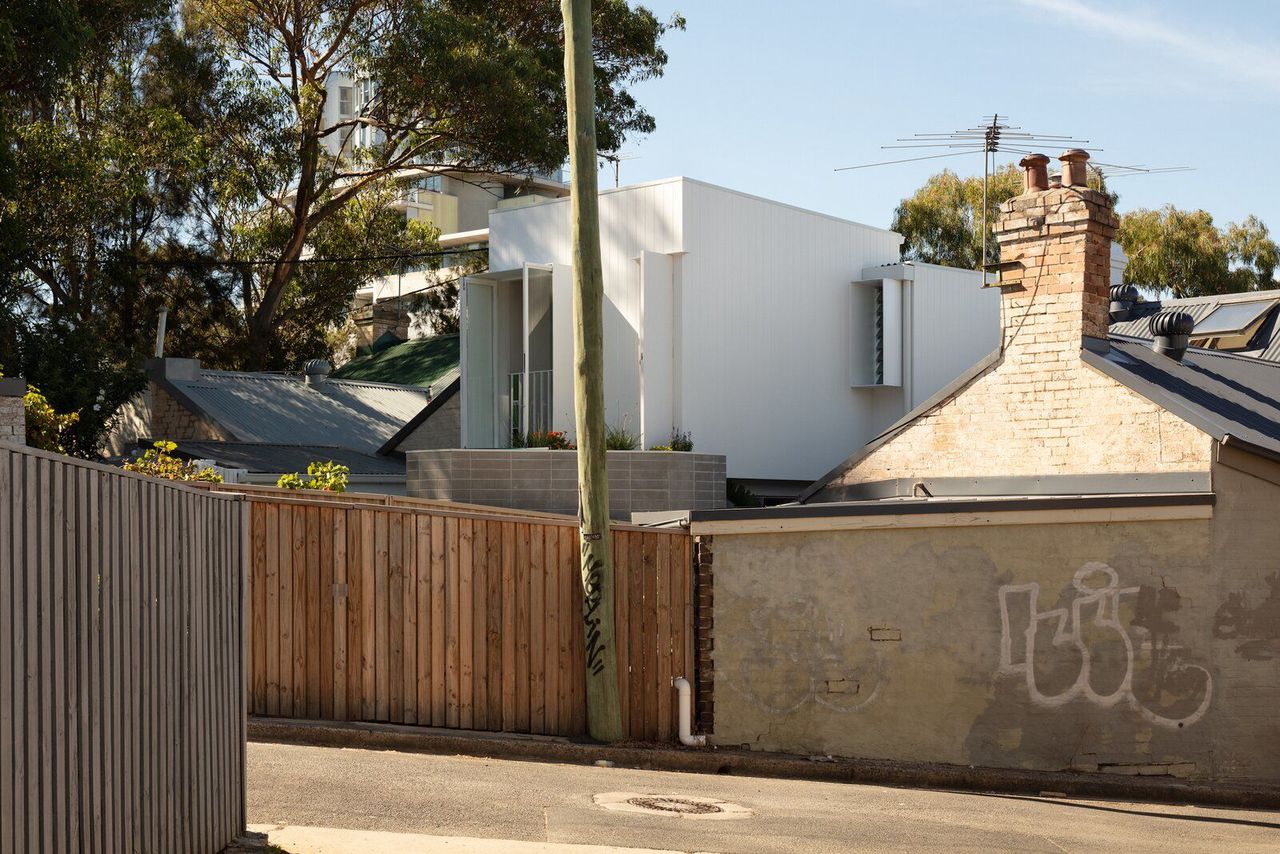 The two-story home, outfitted with white-painted concrete, cement, and brick, is part of a dense and busy urban environment.

The new design-which measures just 645 square feet and features two bedrooms and two bathrooms-rises like a minimalist sculpture out of the center of its varied urban context. "It’s adjacent to a busy train line and beneath a flight path," Williams says. "There’s a lot going on in a very dense inner-city environment." 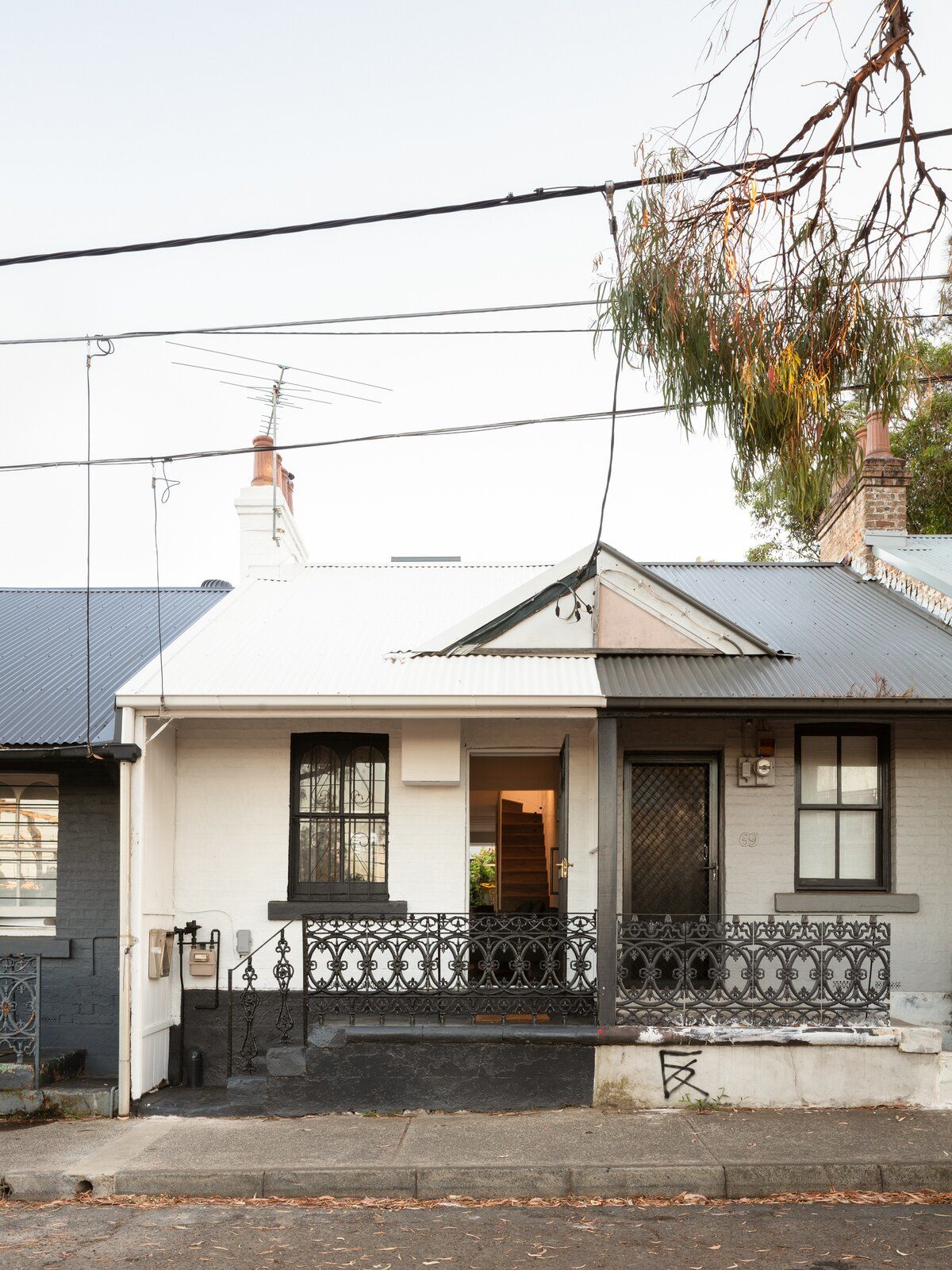 The previous incarnation of the home was a 470-square-foot row house with only one level. A pull-down staircase accessed a half-level located in the attic.

The lot is situated within a terrace row on a triangular block, and it’s marked by 13 angled boundaries. "It’s a lot compared to the typical four boundaries you see with urban street patterns," Williams says. "The design had to rationalize these angles, the small site, and the urban context." 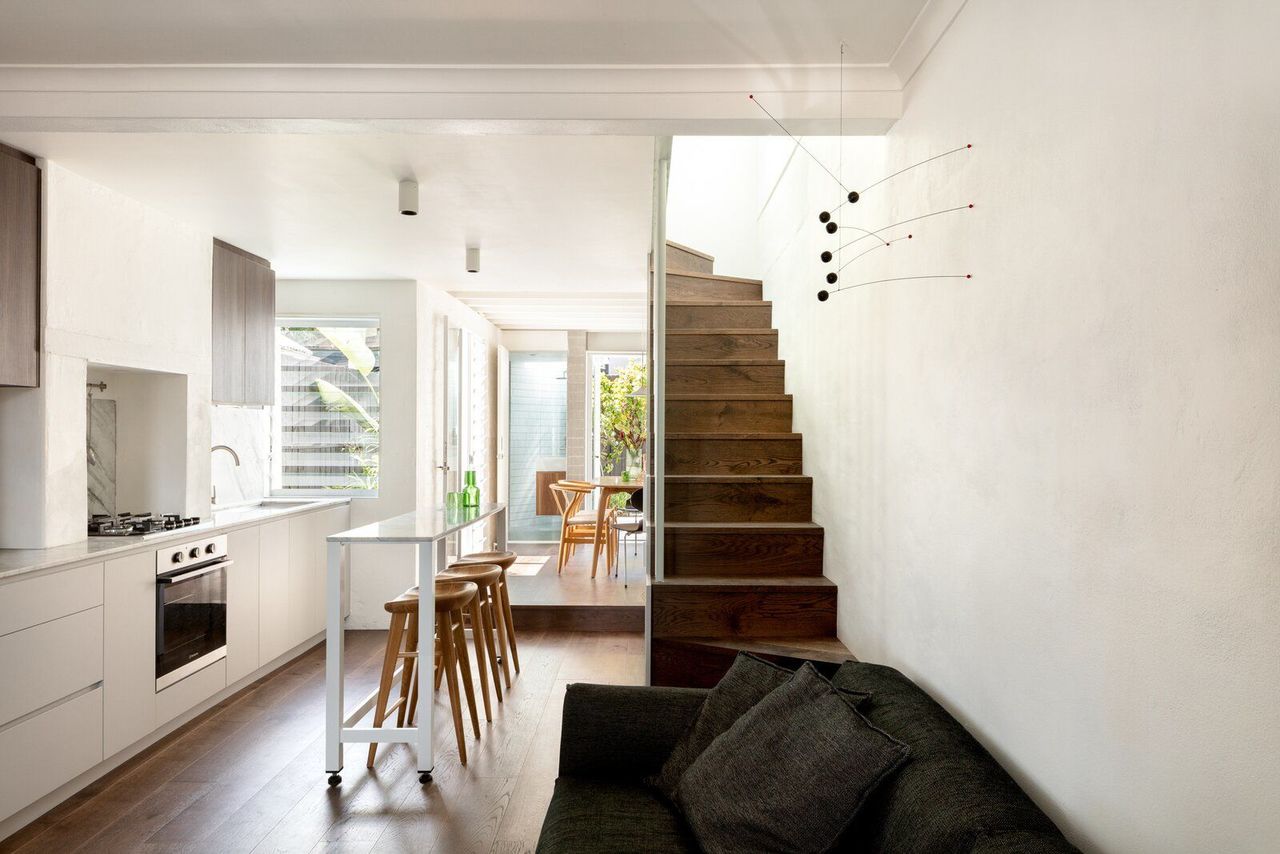 A large glass door at the rear of the home ties the open-plan kitchen, dining, and living areas on the first level to a sun-drenched courtyard filled with plantings. 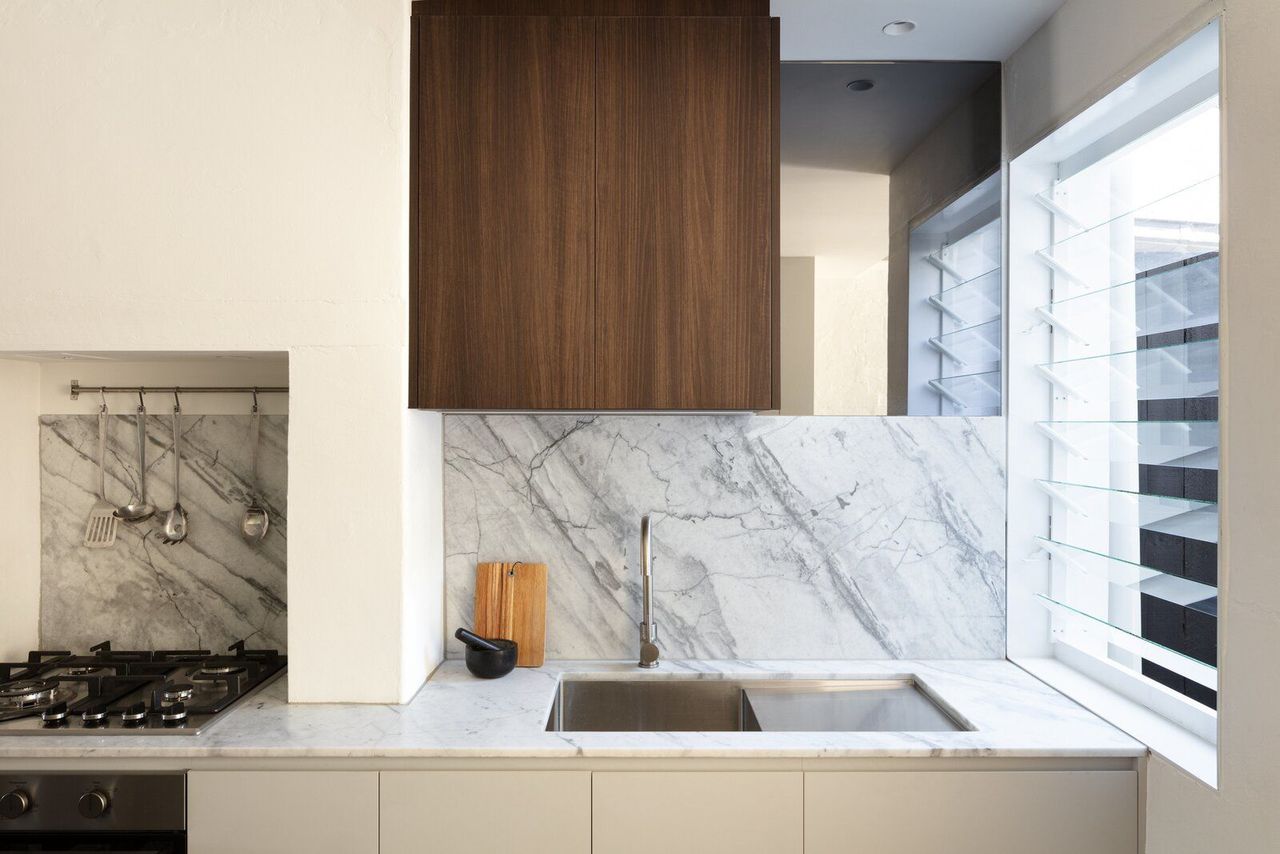 The kitchen displays a variety of textures, including dark walnut and marble.

The architect responded to the complexity of the site by using the angles as opportunities to tie the rooms to the outdoors. "The house is modest in size, so it was important to create indoor/outdoor connections that would increase the sense of space," Williams says. 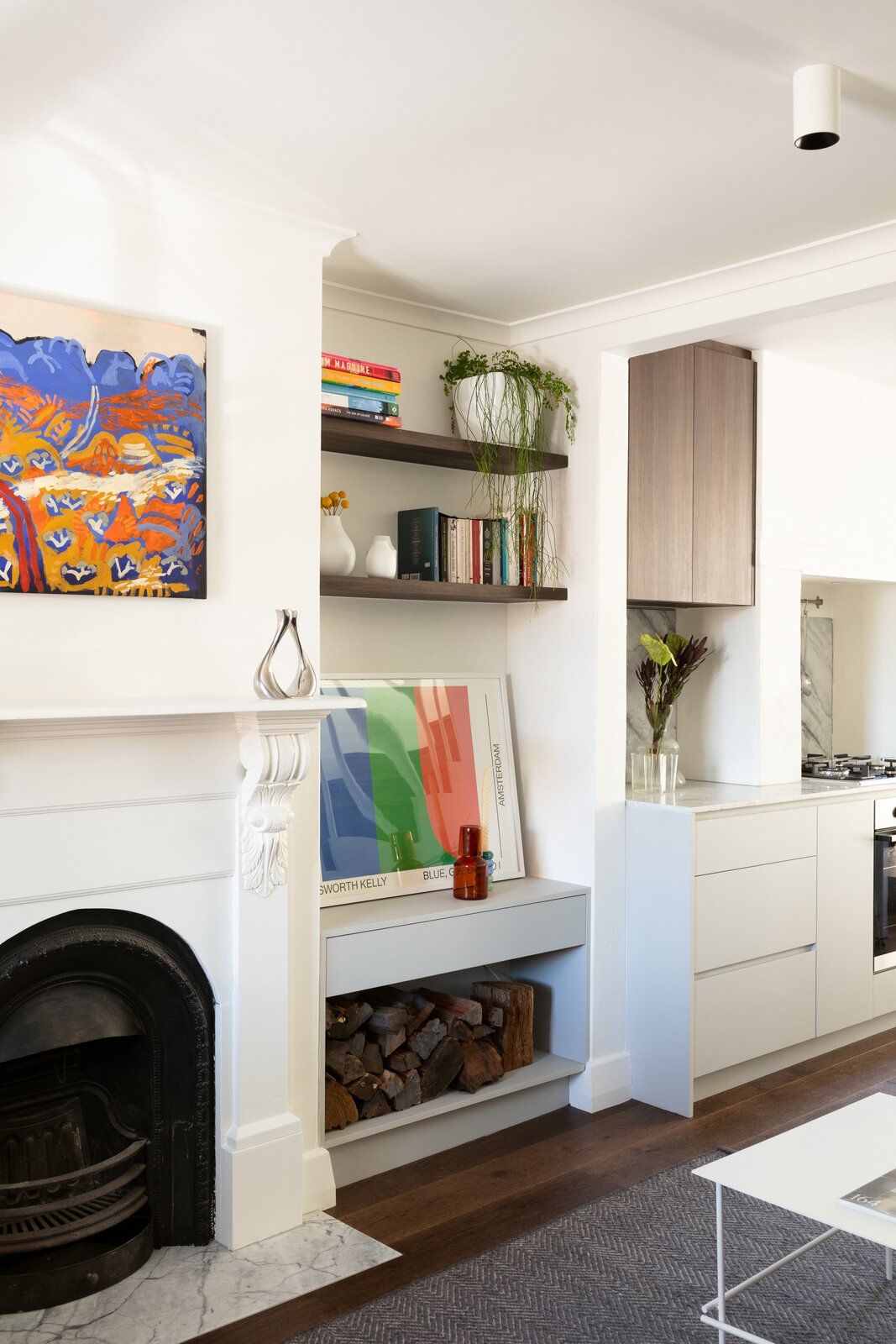 The architects maintained the living room’s original fireplace and selected dark-stained European oak for the flooring throughout the home.

The architect employed large double-glass doors in the dining area to connect the first level (where the open-plan common areas are located) to the sun-drenched rear courtyard and a much-loved community park beyond it. "The courtyard is a continuation of the interior living spaces," the architect says. "There’s also an interior light-well garden located between the kitchen, dining, and bathroom that brings lots of natural light into the home and provides an immediate connection to greenery." 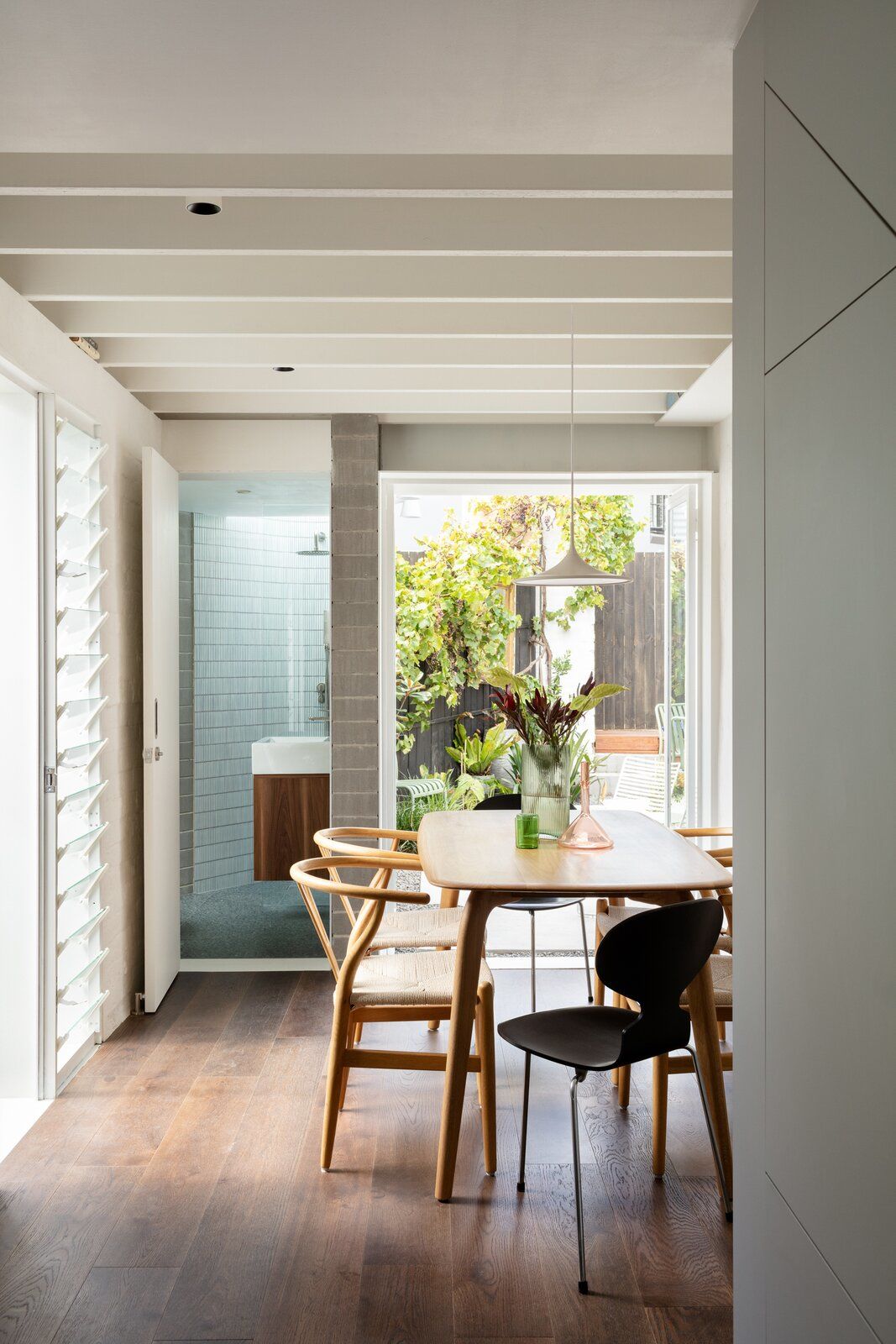 Sunlight pours in through the rear glass doors, washing over the wood dining table and the European oak flooring.

The bathroom on the first level brings more greenery and sunlight to the public areas. "A new, smaller bathroom is positioned within a triangular portion of the site on the ground floor," Williams says. 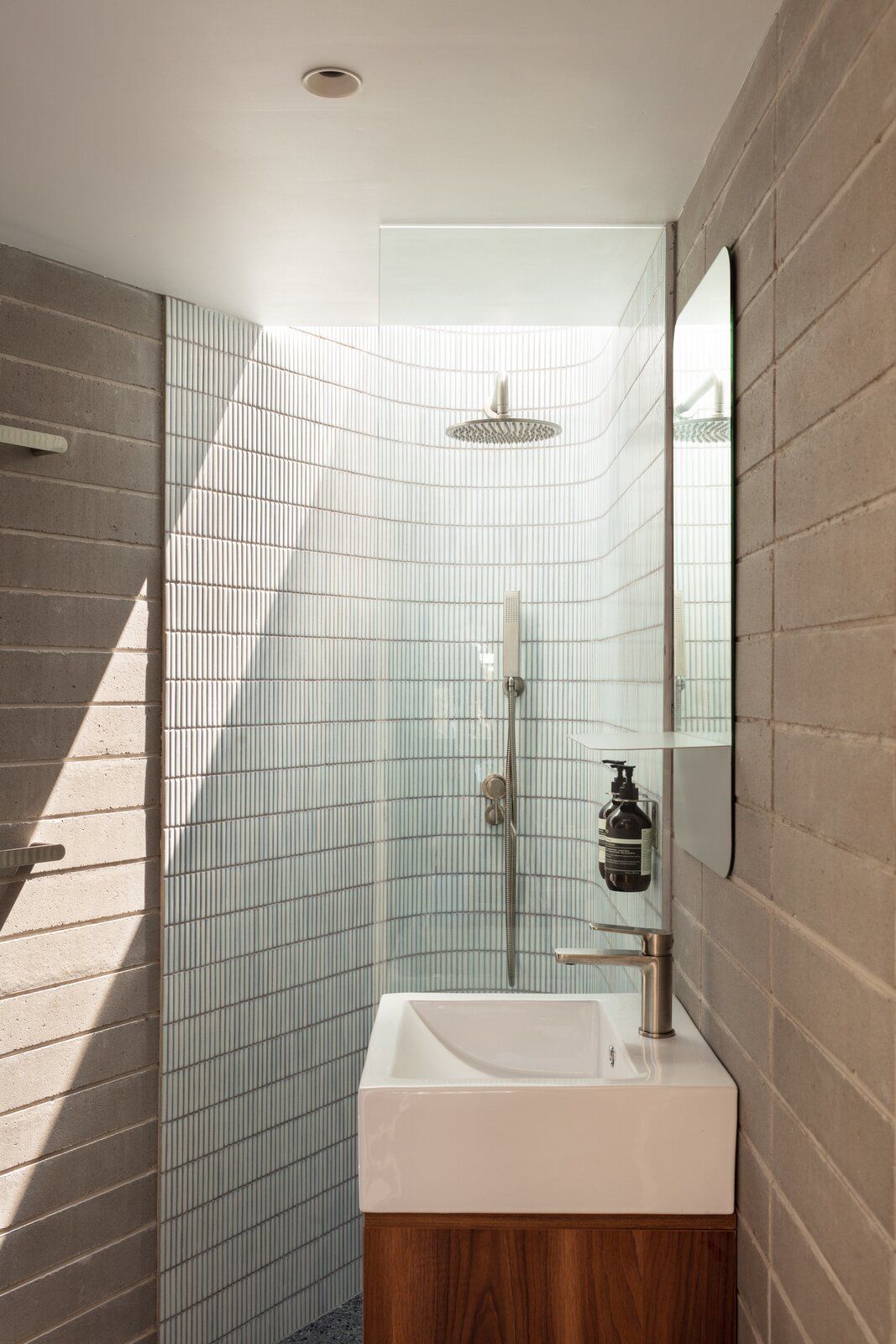 The small bathroom on the first level features concrete block walls and ceramic mosaic tile. A skylight in the shower supplies an indoor/outdoor experience.

The exterior of the first-level bathroom, clad in pale-gray concrete brick, juts out into the rear courtyard. "It’s an element that’s somewhat sculptural," says Williams, who topped the space with a living roof. "The green roof provides a much-loved outlook for one of the bedrooms on the second level," the architect says. 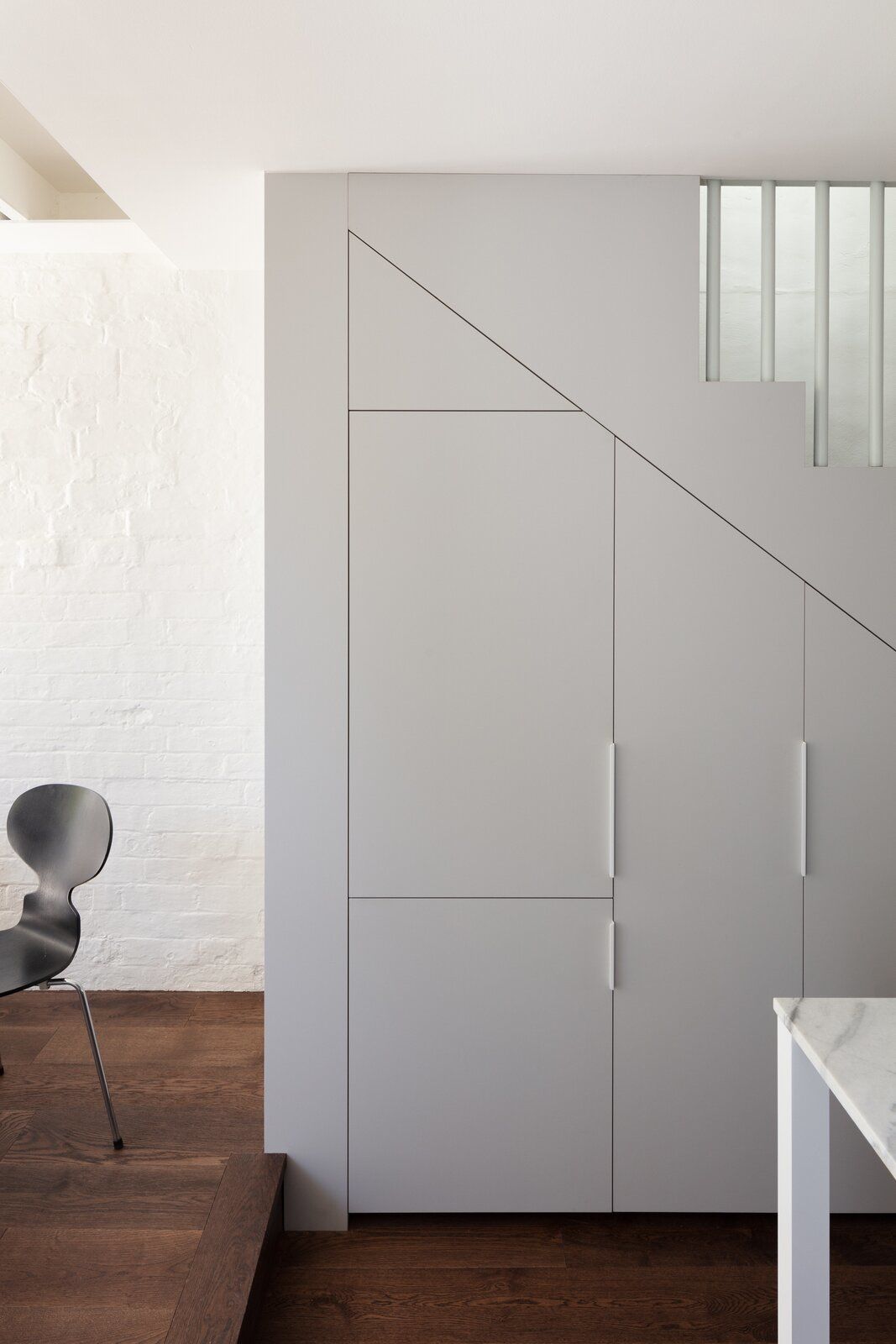 White-painted storage cabinets are built into the wall beneath the staircase. 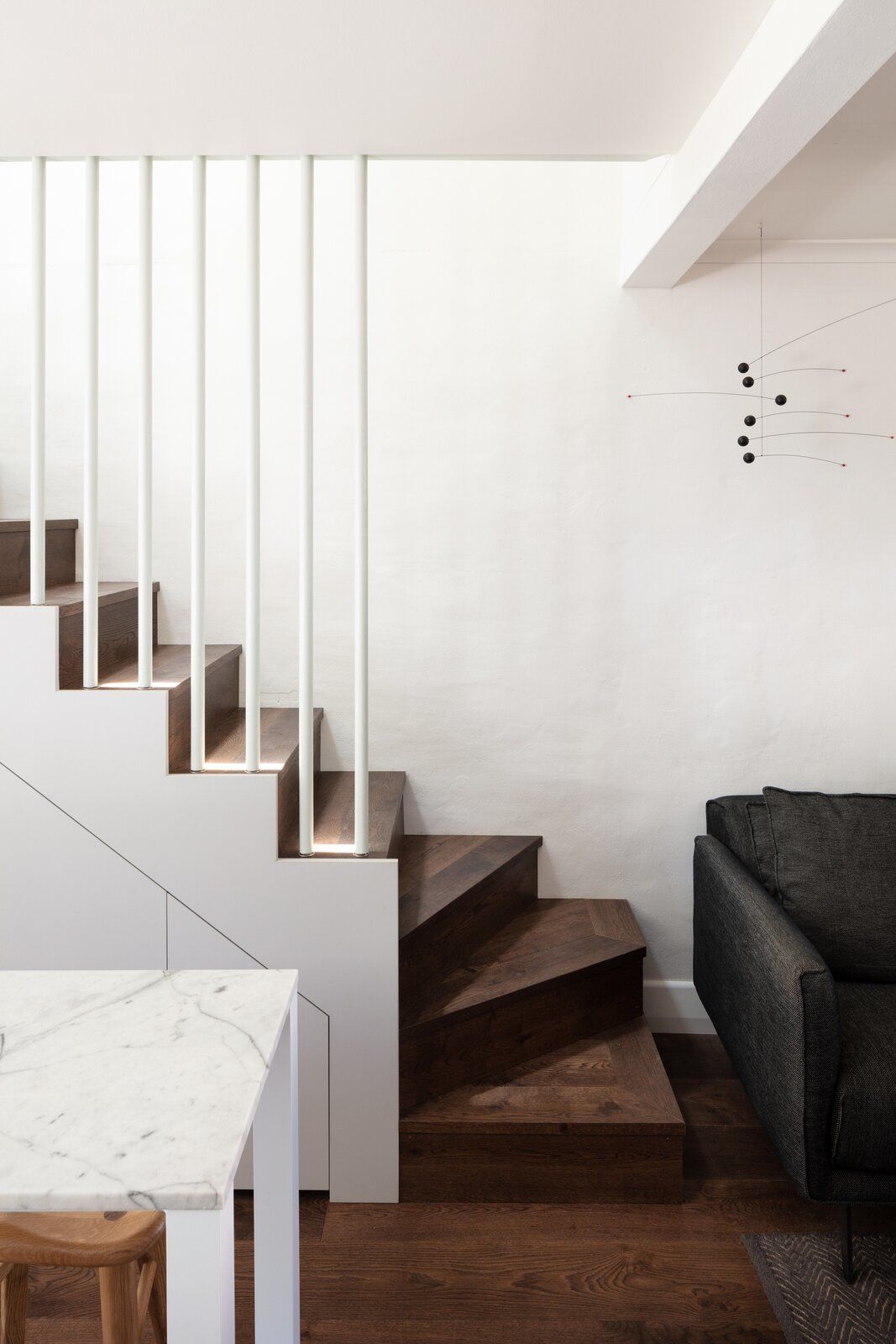 The staircase features a slim silhouette that preserves ground space for the open-plan first level, where the kitchen, dining, and living areas are located.

The first-level bathroom has a curved shower area with a skylight, which provides the feeling of an outdoor shower. "The ground-floor plan responds to the objectives of the brief, which was to provide living areas that connect to sunlight and greenery," Williams says. 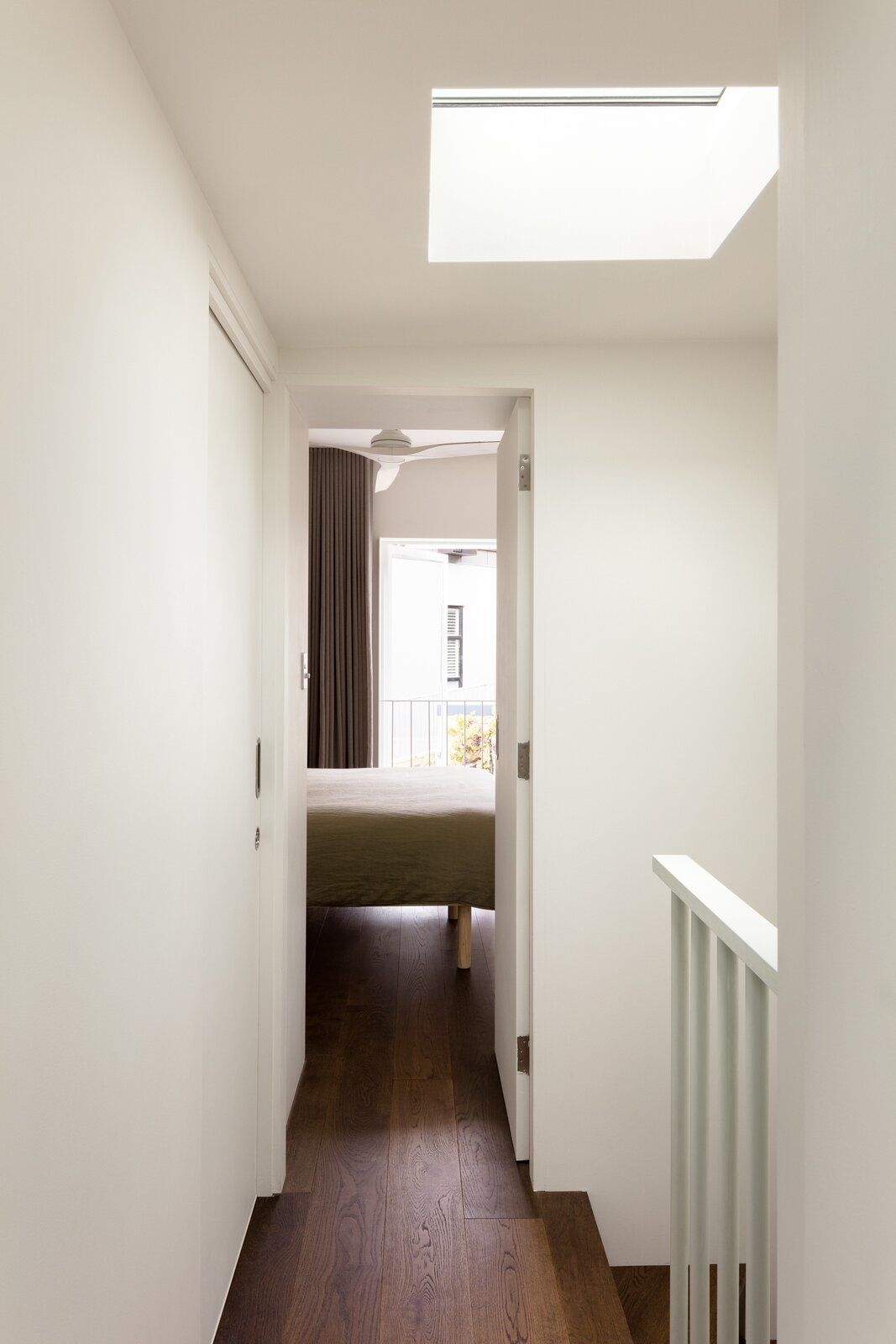 A skylight above the staircase floods the upper-level hallway with natural light.

The architect selected an all-white palette for the interior walls to let the greenery, sunlight, and textured finishes take center stage. "The uniformity of color, and the minimal form add a sculptural element and offset the layers of graffiti and urban life that surround the home," he says. 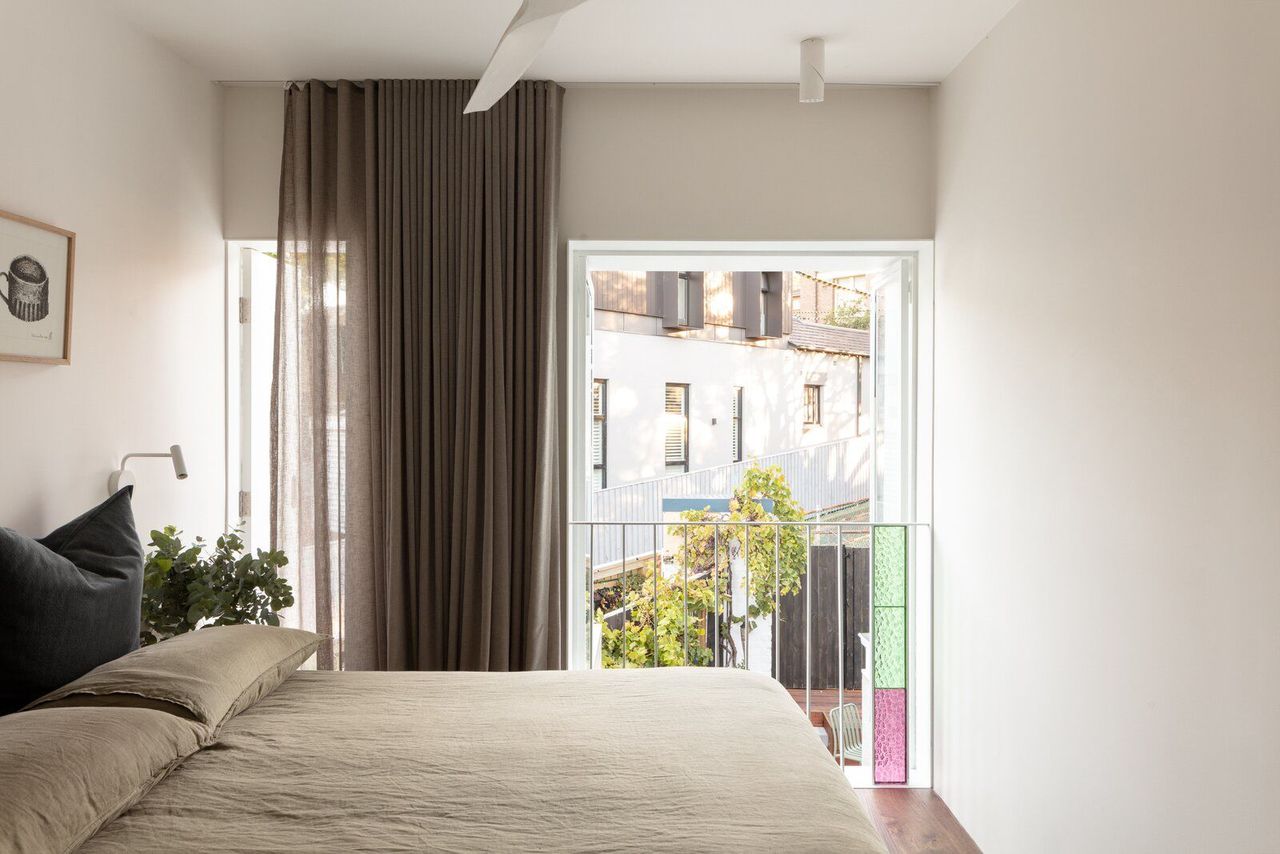 A small balcony connects one of the bedrooms on the second level to the landscape.

Williams maintained much of the existing house’s structure and footprint, changing only the arrangement of the rooms and removing unwanted walls that blocked natural light and chopped up the space. "The reworkings were minor, but they improved the plan dramatically," he says. 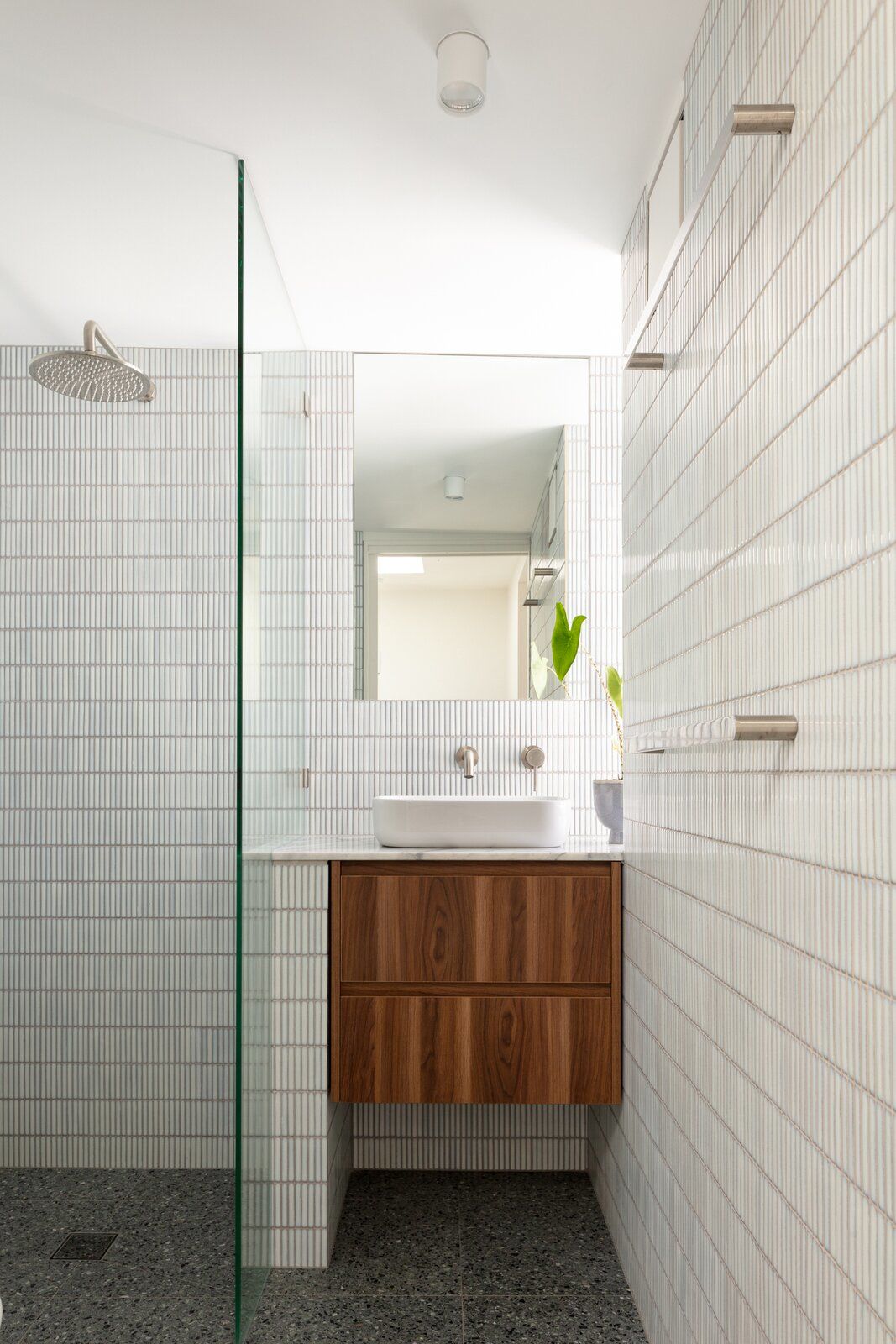 The bathroom on the second level is outfitted with terrazzo tile flooring, ceramic mosaic tile walls, and a walnut vanity.

The new home’s footprint is slightly smaller, but it features rooms that are practical in size. "The living areas are perfectly large enough, and with the connection to the courtyard, the ground floor effectively doubled in size," Williams says. "The site afforded no room to spare, so-like when building a finely constructed boat-we focused on using every millimeter of space available to create a comfortable home." 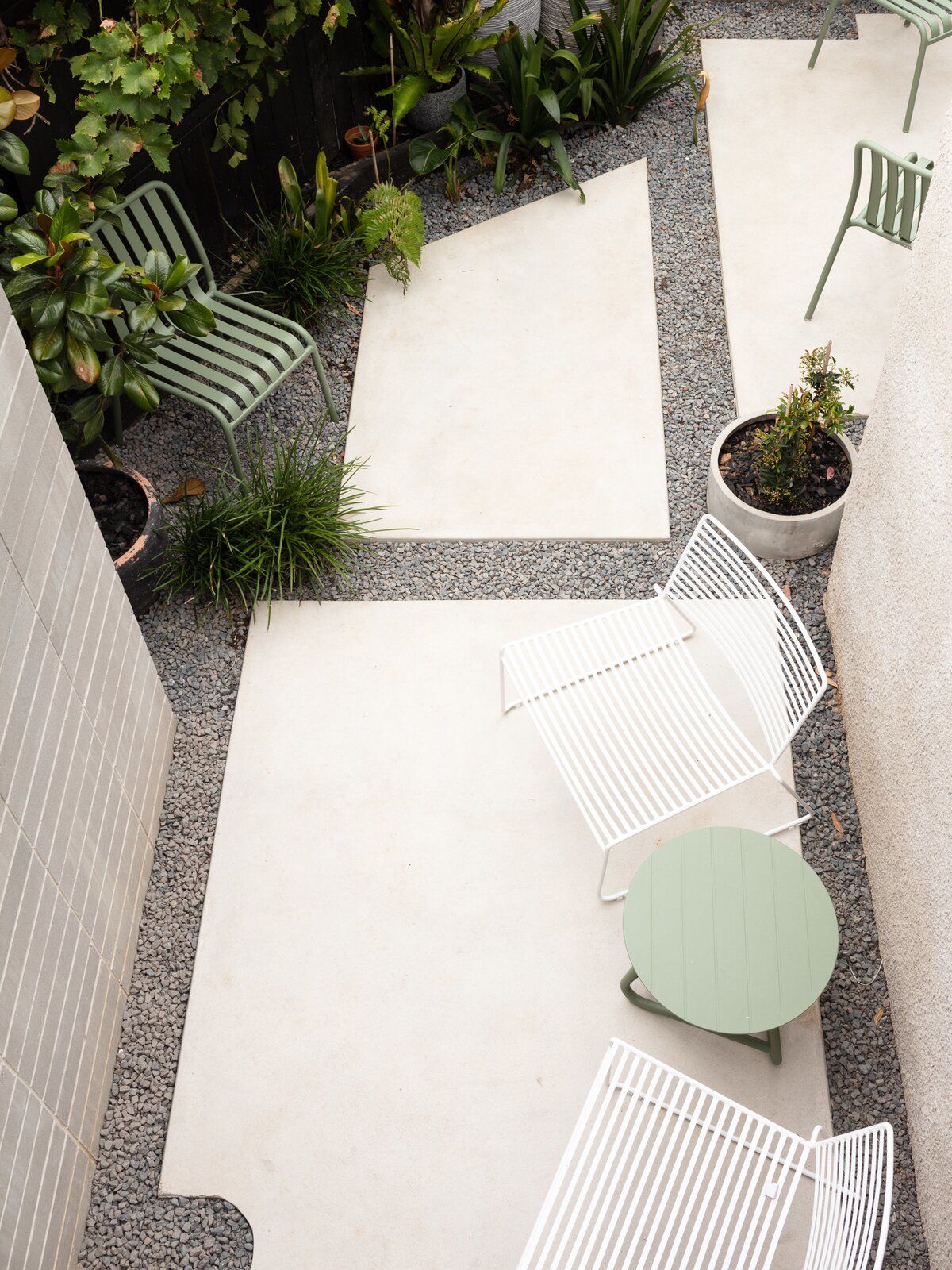 One of the second-level bedrooms looks down to the ground-floor courtyard. 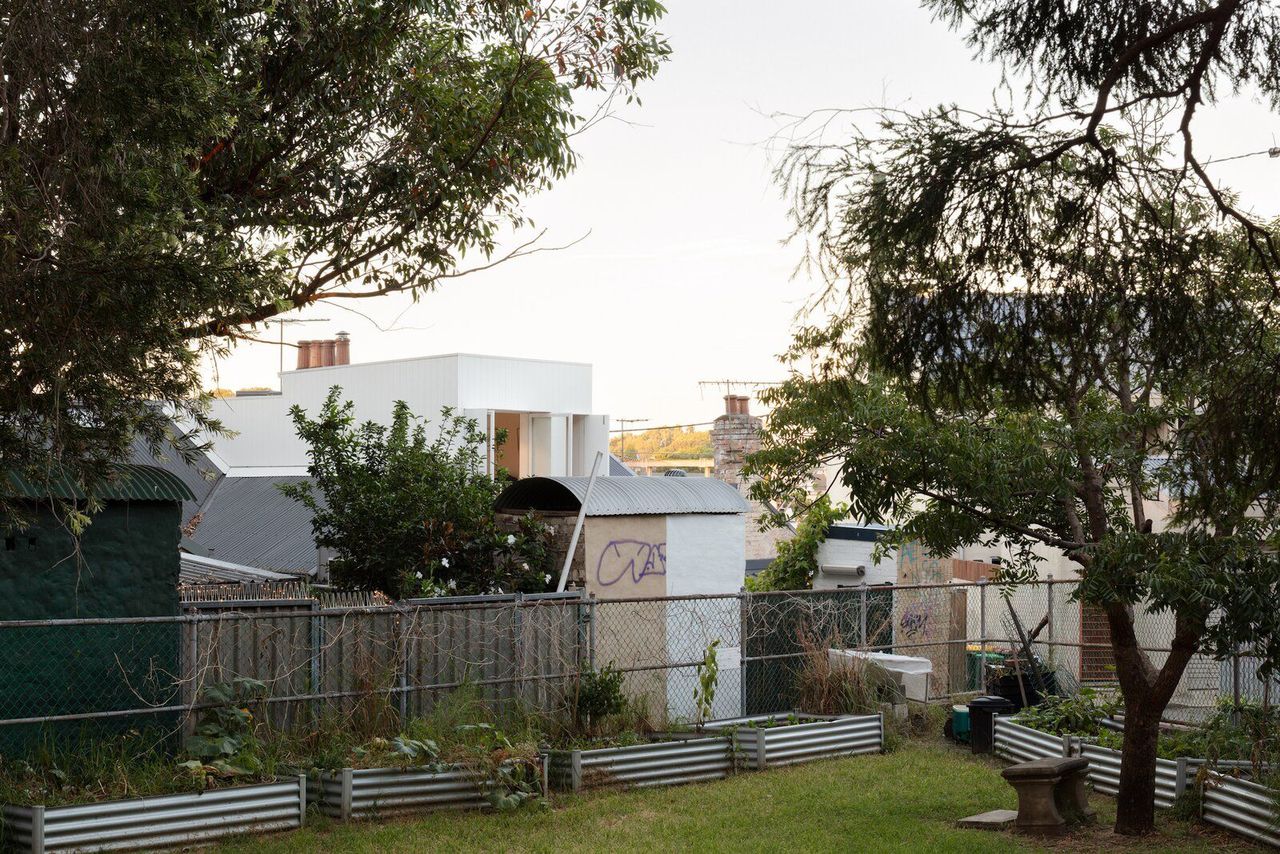 A much-beloved community park and garden behind the home offers more opportunities to connect with nature.