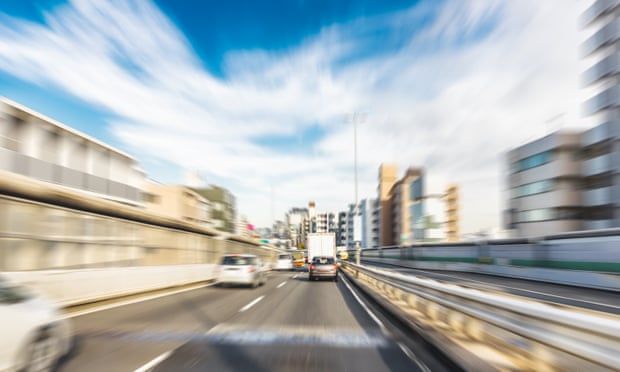 'A long road': the Australian city aiming to give self-driving cars the green light

Ipswich is an ideal place to trial technology to bring fully self-driving cars to Australian cities. But the project has had to overcome a lot of road bumps

As the traffic lights turn from amber to red, Miranda Blogg accelerates towards them.

A dash-mounted screen in her Renault ZOE flashes a warning featuring a traffic light symbol.

“Whoops,” she says, as she brakes, still well ahead of the lights. 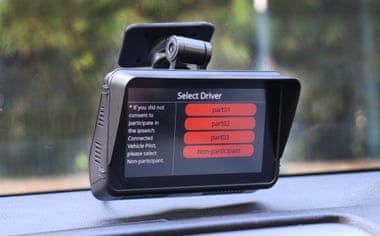 A dash-mounted screen in a Renault Zoe helps test self-driving systems in Ipswich.

Blogg is the director of the Connected and Automated Vehicle Initiative (Cavi) at Queensland’s transport department. Since September it has retrofitted 350 vehicles with cloud-connected antennae, under-the-seat control boxes and dash-mounted screens to test systems in the streets of Ipswich that might one day allow fully self-driving cars to operate.

This technology installed as part of the Ipswich connected vehicle pilot – Australia’s largest to date – allows cars to communicate with other cars, sharing information about their position, speed and other data, and to receive real-time warnings from roadside infrastructure about road hazards or red lights.

Blogg says that emerging data is promising, but further research will be needed to explore whether the system could work on a broader scale.

As we crawl through Brisbane’s peak-hour traffic, heading west towards Ipswich with Blogg behind the wheel, the dash-mounted screen displays nothing more than a static white circle.

But as we hit the Centenary Highway, just past the Moggill Road turnoff, we enter the 300 sq km radius of roads that are part of the trial, and the screen blinks to life, showing the current speed limit.

A few kilometres further on, Blogg points out a roadside sign flashing a variable speed limit, signalling that the usual 90km/h limit has been reduced to 80.

Being able to “read” variable speed limit signs is crucial to the connected driving vision, which demands accurate real-time feeds from a multitude of sources. There are 90 jurisdictions in Queensland that manage speed limits, including 77 local councils, 12 TMR districts and the toll-road operator Transurban.

“It seems simple but it’s actually quite a lot of effort,” Blogg says. 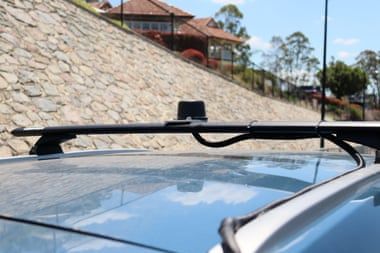 Cloud-connected antennae retrofitted to cars can ‘talk’ to information-gathering antennae on traffic lights in Ipswich.

As we reach the central business district of Ipswich, Blogg circles the block to demonstrate the car’s ability to recognise the red light – one of the 30 sets in Ipswich fitted with information-gathering antenna.

Similar warnings are activated when drivers head towards hazards such as water on the road, road closures or a crash, or when there are pedestrians or bicycles crossing at an intersection.

No vehicles have yet been automated as part of this trial, says Prof Andry Rakotonirainy, the director of QUT’s centre for accident research and road safety, one of the partners in the trial.

However, the technology represents an important link in the transition to self-driving cars. In the meantime, it will “help people to drive safely, and potentially reduce road trauma”, he says.

Participants are now being recruited for a different trial, which will include elements of automation.

Ipswich was chosen for the trial partly thanks to its proximity to smart motorways, which already embed information, communications and control systems in and alongside the road.

Unlike Brisbane, it uses the same standard traffic signals as rest of the state. Unlike the Gold Coast, it has no expanding light rail network to complicate matters. And unlike the Sunshine Coast, the CBD has a grid structure, facilitating ample interactions between cars, bikes and pedestrians.

There was one more reason – when the trial was set up, the ebullient “Mr Ipswich”, Paul Pisasale, was mayor.

Pisasale threw his support behind the iGO plan for a sustainable transport future and the Smart City program, which promised innovations such as robotic street cleaners, wheelie bins that alert garbage trucks when they need to be emptied and park benches with solar-powered charging stations.

These initiatives survived the downfall of Pisasale, who resigned in June 2017, and was later jailed in relation to a raft of charges including extortion, fraud and sexual assault, and the later sacking of the entire Ipswich City Council in 2018, followed by a 16-month period of administration.

It was a tumultuous time, which heightened concerns over the continuity of the project.

“We moved pretty quickly to gain the support of the new councillors,” Blogg says. “Sometimes it can be a very complicated project to explain [but] they were great, they were on it, which made my life much easier.”

Other challenges lay ahead, including equipment malfunctions due to summer temperatures in Ipswich which are, on average, 5C higher than Brisbane’s.

Then followed a year of more or less empty roads due to Covid-19, which the team filled with up to 30,000 kilometres of on-road testing to keep participants motivated and to prepare for the current on-road phase.

“Some may refer to it as the Cavi curse,” Blogg says. “It was a long road.”