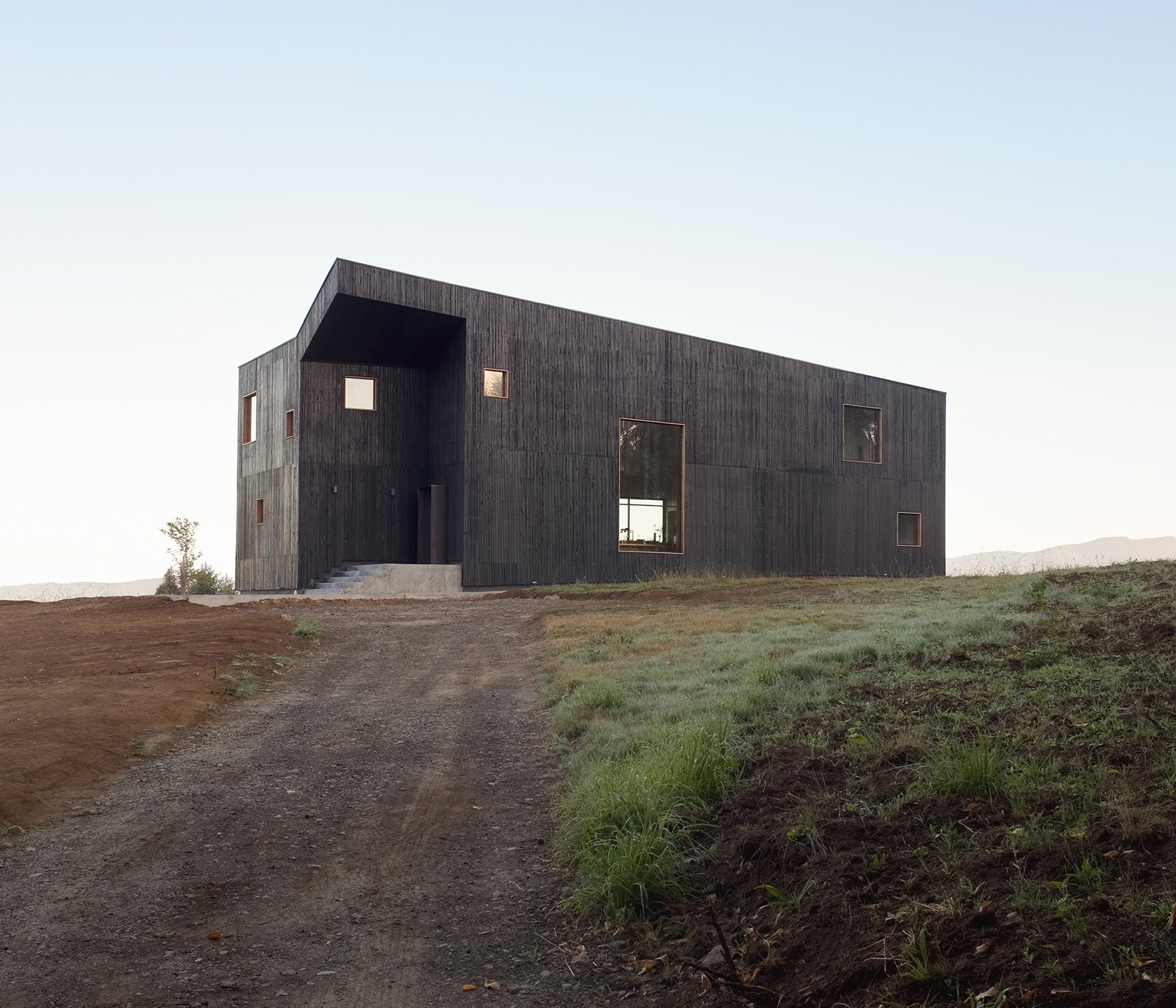 From some angles, this dramatic residence resembles a pitched-roof shed, while other vantage points reveal its graduated form.

Rising from the foothills of one of Chile's most active volcanoes, this family home near the town of Pucon in the Araucanía region responds to the dramatic landscape that surrounds it. Santiago, and London based practice Ampuero Yutronic's initial concept for Casa Hualle was a simple rectangular volume, but the drawings evolved, through a series of manipulations and interventions, into a more sculptural form. 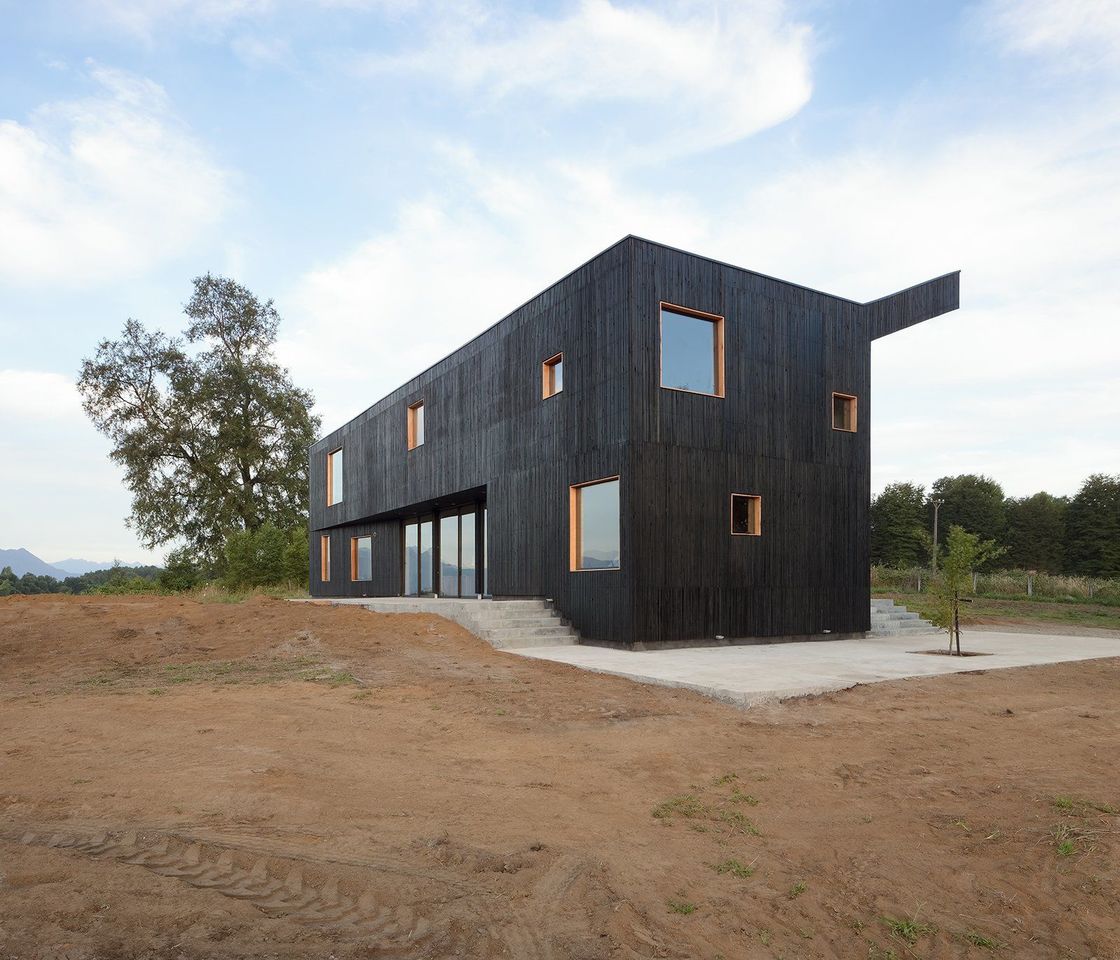 Perched on a concrete terrace on half a hectare of open land, the residence has a monolithic black form, its tint echoing the natural landscape's dark volcanic stone. 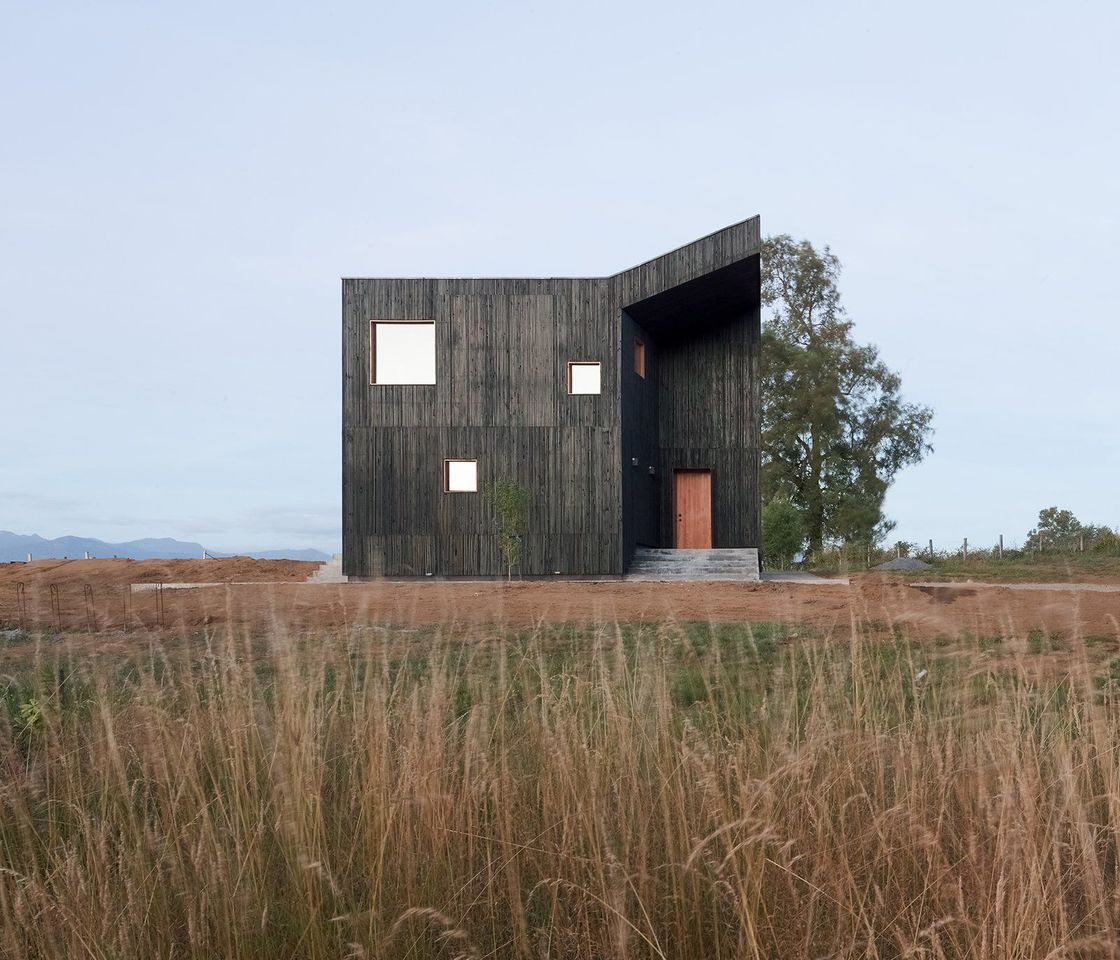 "The geometry of the roof transforms from a typical pitched gable on the short northeast end of the façade, to a flat roof on the opposite end of the southwest facade," says cofounder Javier Ampuero Ernst. "This transition creates a dynamic arrangement of folding roof planes."

Inspired by the pitched-roof agricultural sheds found around Araucanía, the house is conceived as a single, sculptural volume with almost 2,475 square feet of living spaces spread across two levels. 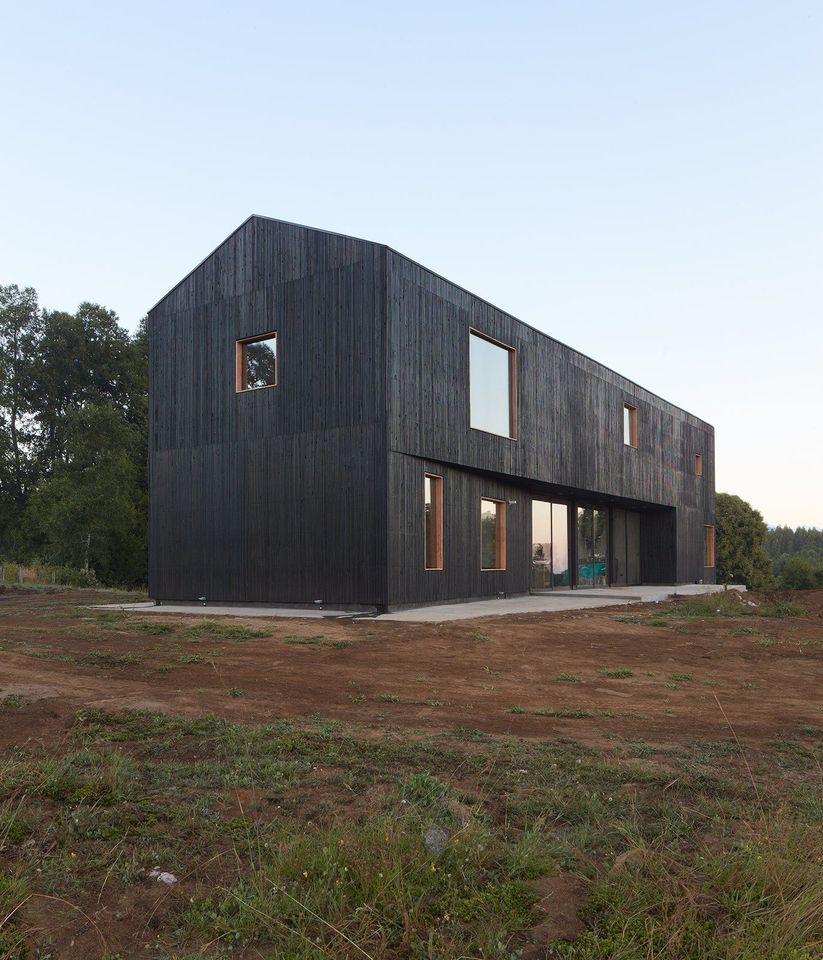 The windows, which vary in size, were strategically placed to capture dramatic views of the volcano and lake.

"The rectangular footprint is extended to align the south side perpendicular to the axial view of the volcano, creating an irregular floor plan and volume," says firm cofounder Javier Ampuero Ernst. "The entrance to the house is emphasized by a large cutout in the overall volume on the southwest corner." 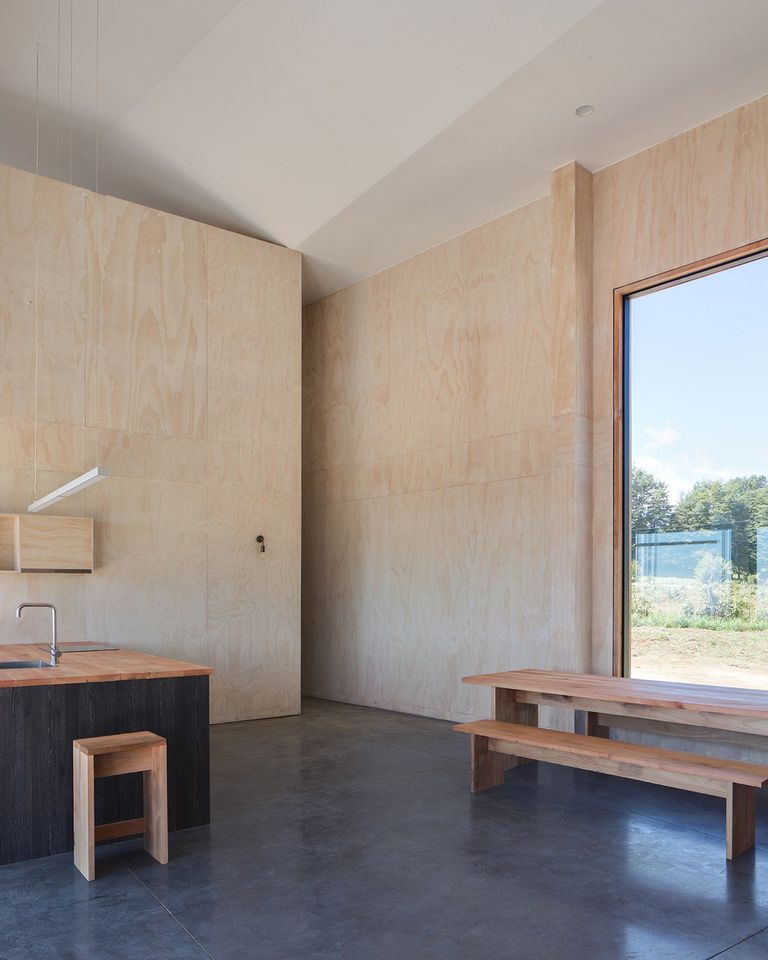 The roof extends above the cutout section to accentuate the entrance, and to provide shelter from wind and rain. 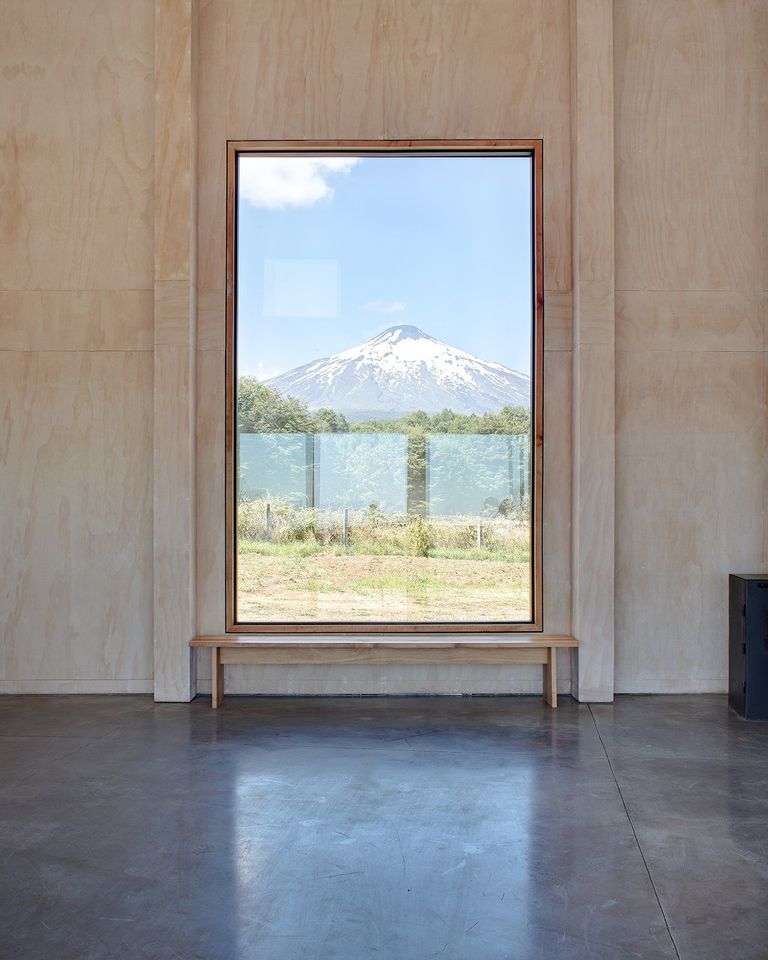 Polished concrete mixed with black volcanic sand is used for the floor, while the ceilings are lined in plasterboard.

In contrast to the dark exterior, the interior walls are clad in pale, stained plywood. As a result, scenes of the outdoors that are framed by windows stand out in contrast like landscape paintings against a gallery wall. 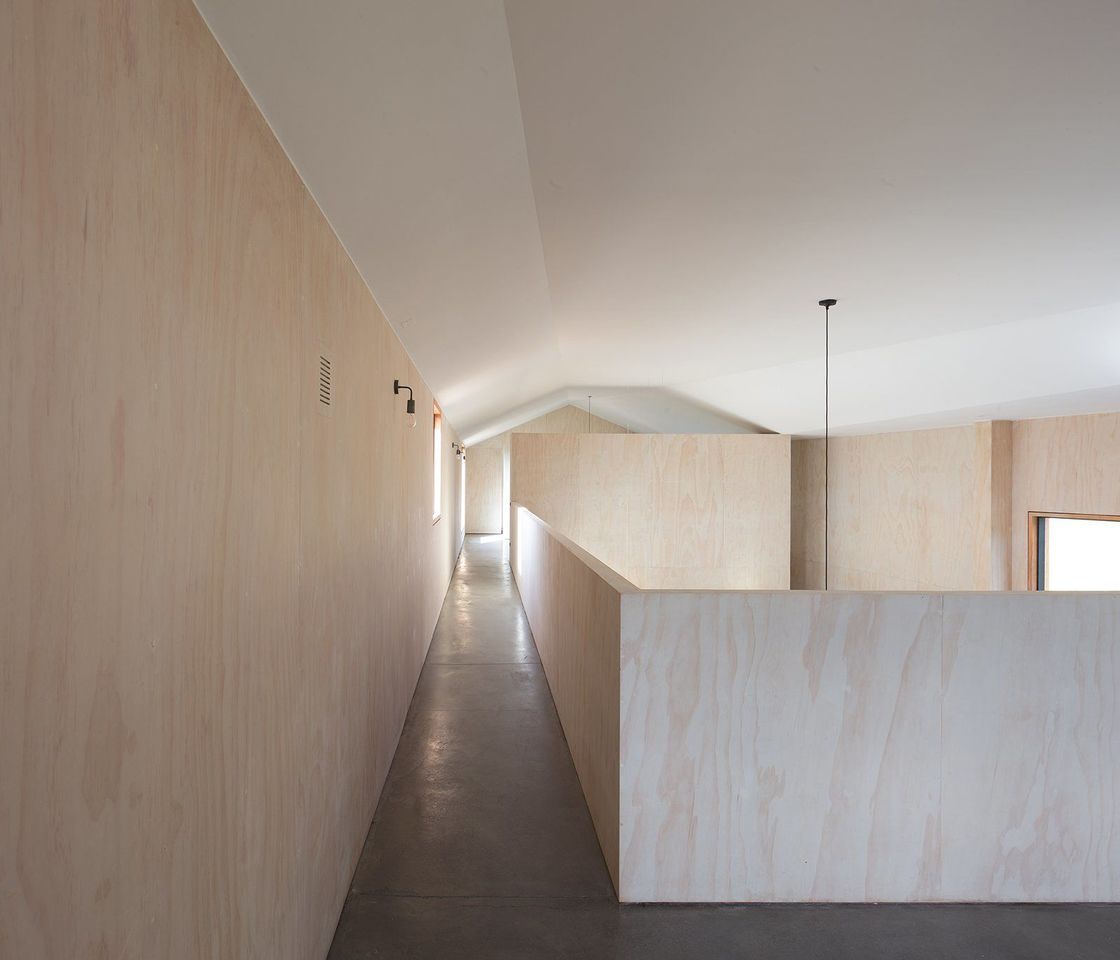 The corridor on the upper level.

The ceiling-which is supported entirely by the external perimeter wall, and uninterrupted by internal partition walls-folds and flows sinuously through the entire length of the building. 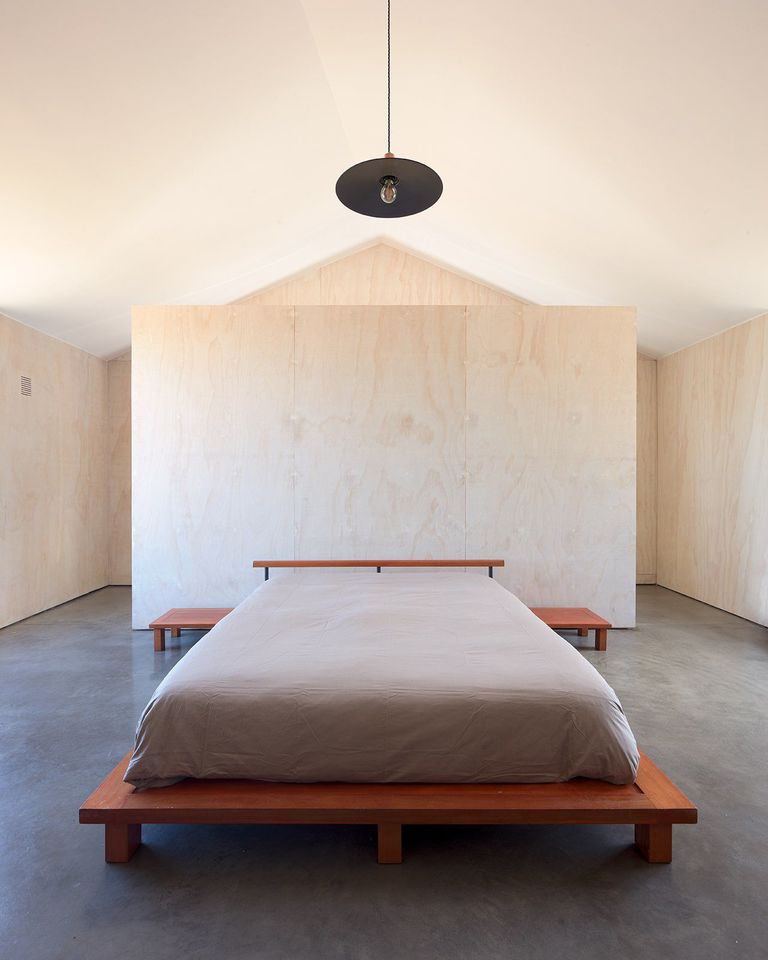 On the upper level is a corridor with a studio, library, and gallery that leads to the ensuite master bedroom. 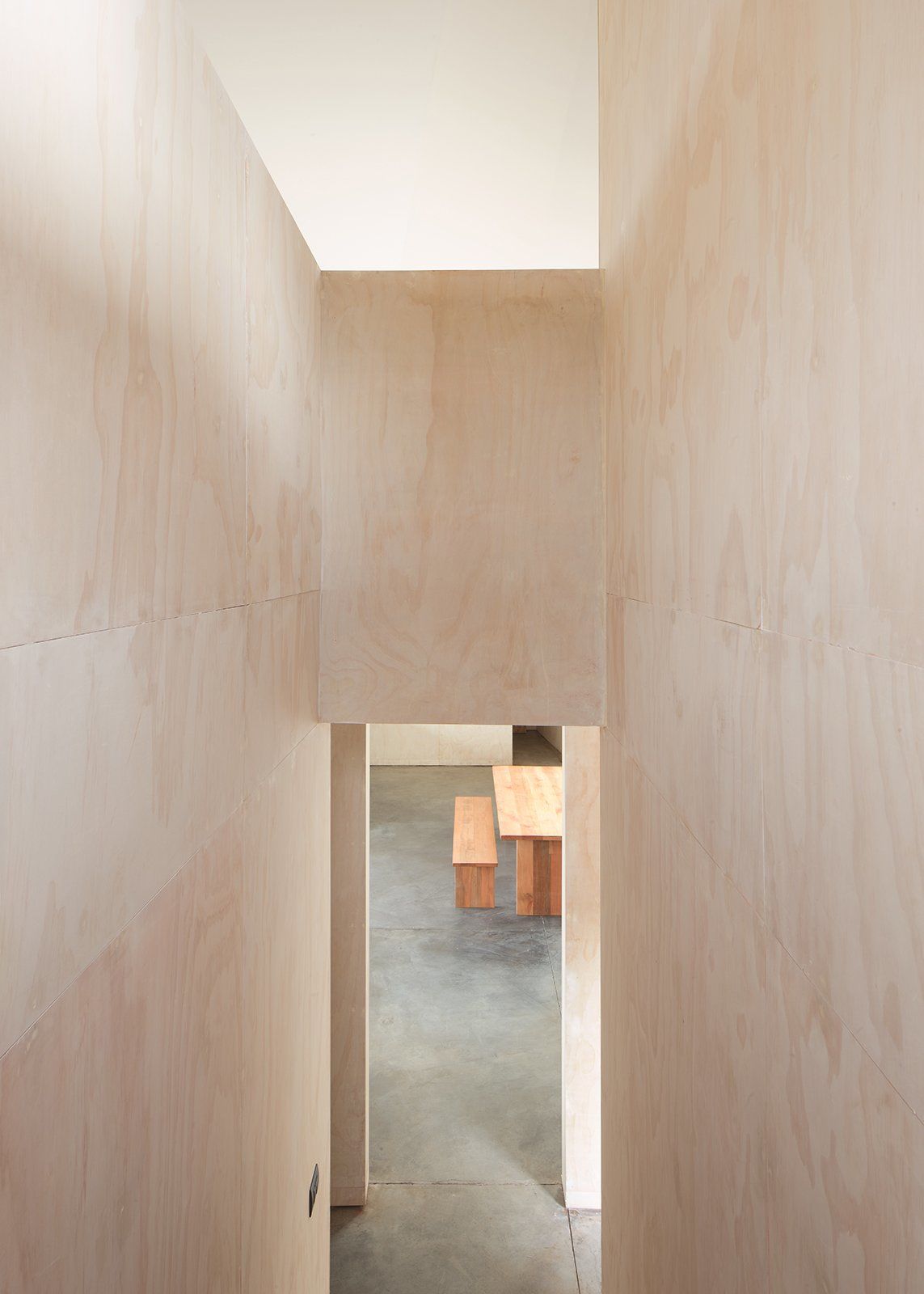 The living room, dining room, kitchen, and two guest bedrooms are located on the ground level.

The living spaces are arranged around a central, double-height volume with the main living areas oriented on a north-south axis. Large apertures capture the best volcano and lake views, further connecting the residents with their environment. 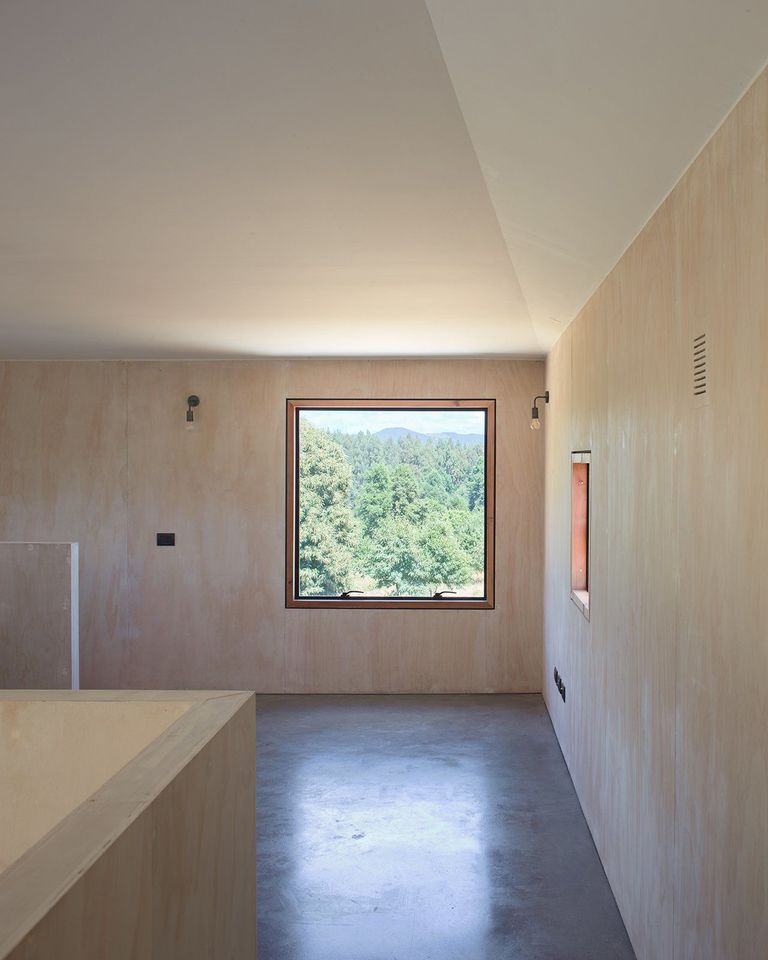 A view of the temperate rainforest outdoors.

Says Ampuero Ernst, "Approaching by road, the house appears as a prominent, simple, black form on the hillside, reminiscent of the traditional, large, agricultural, pitched-roof sheds found in the area. In contrast, when viewed from the main valley to the north, the building nestles and blends into its rural pastoral surrounds." 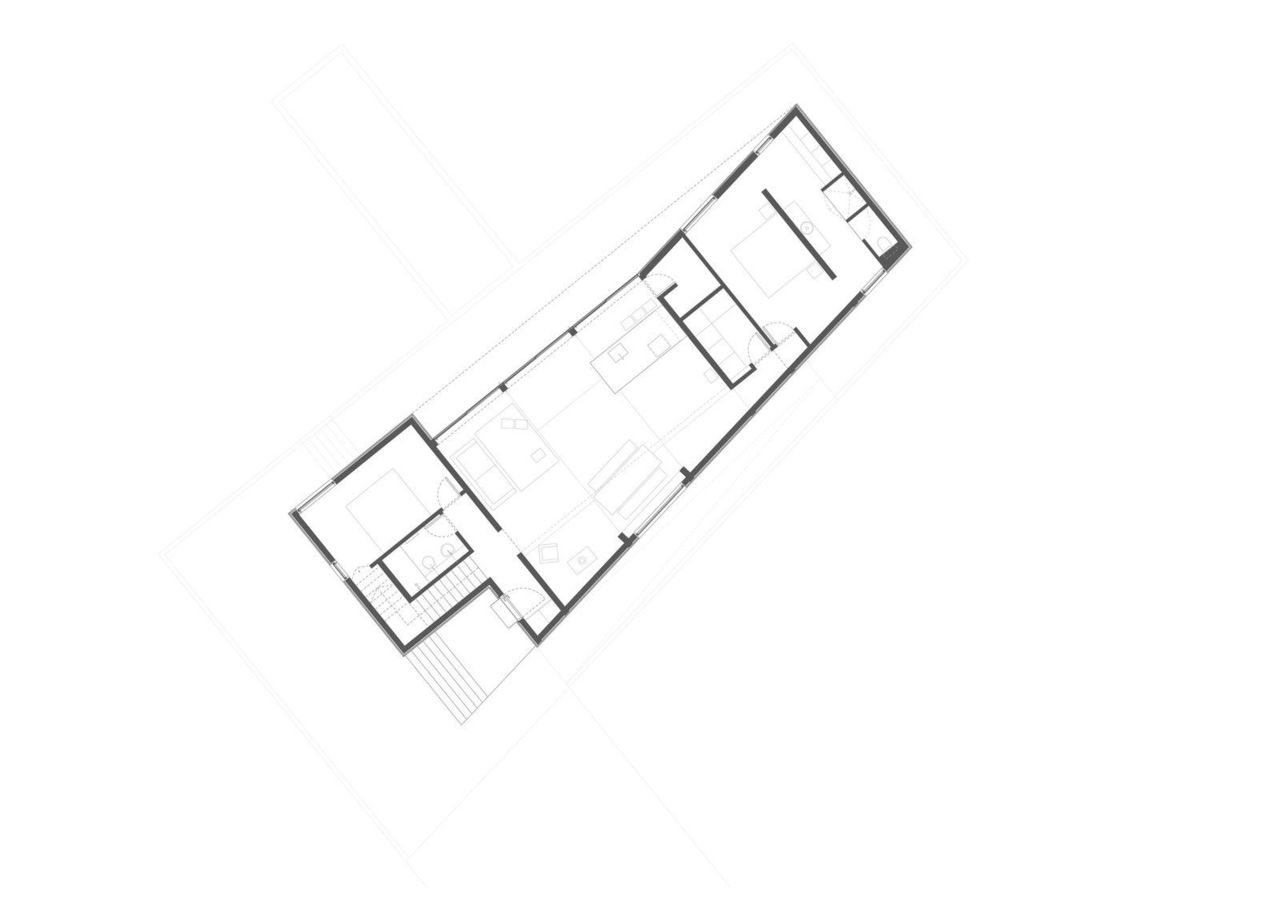 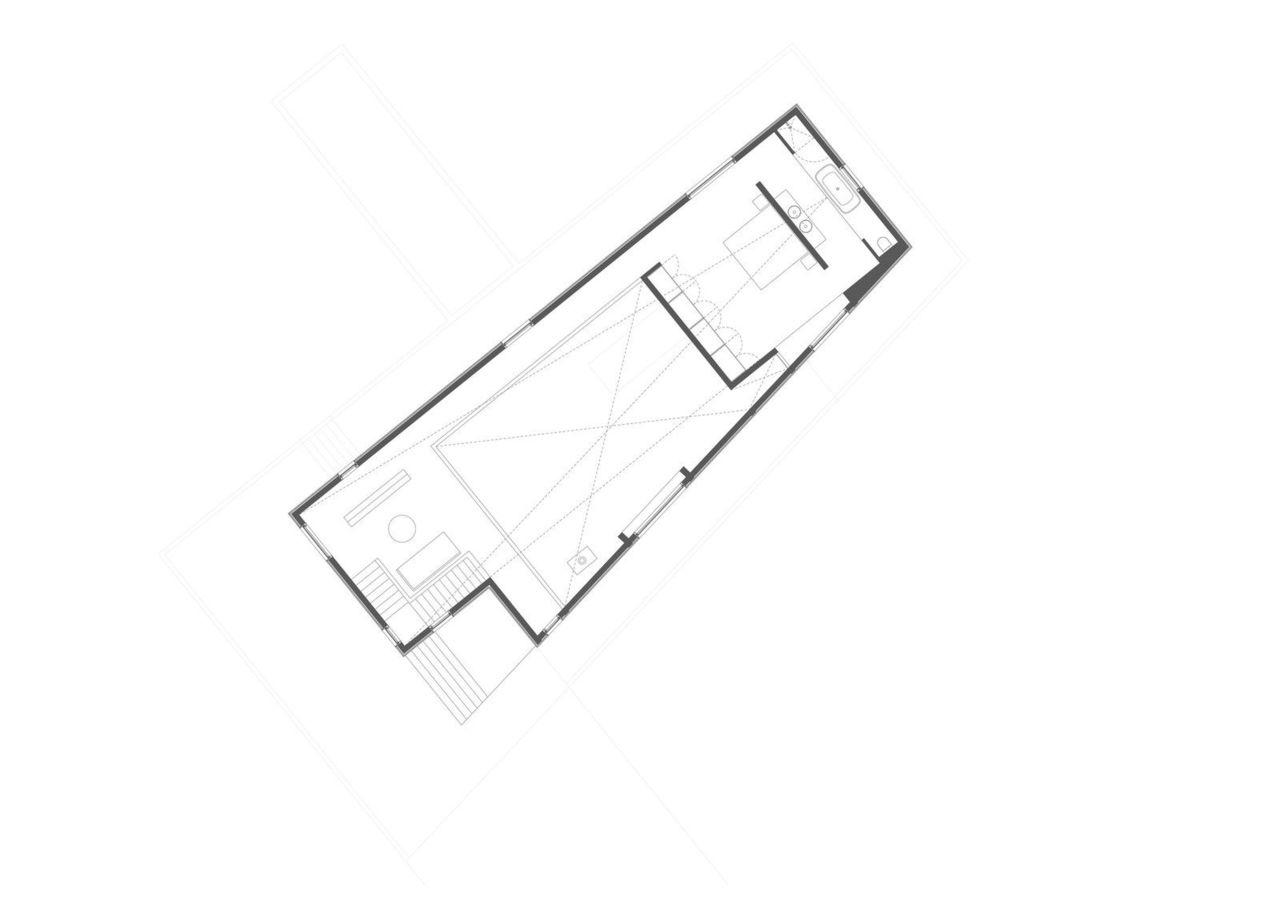 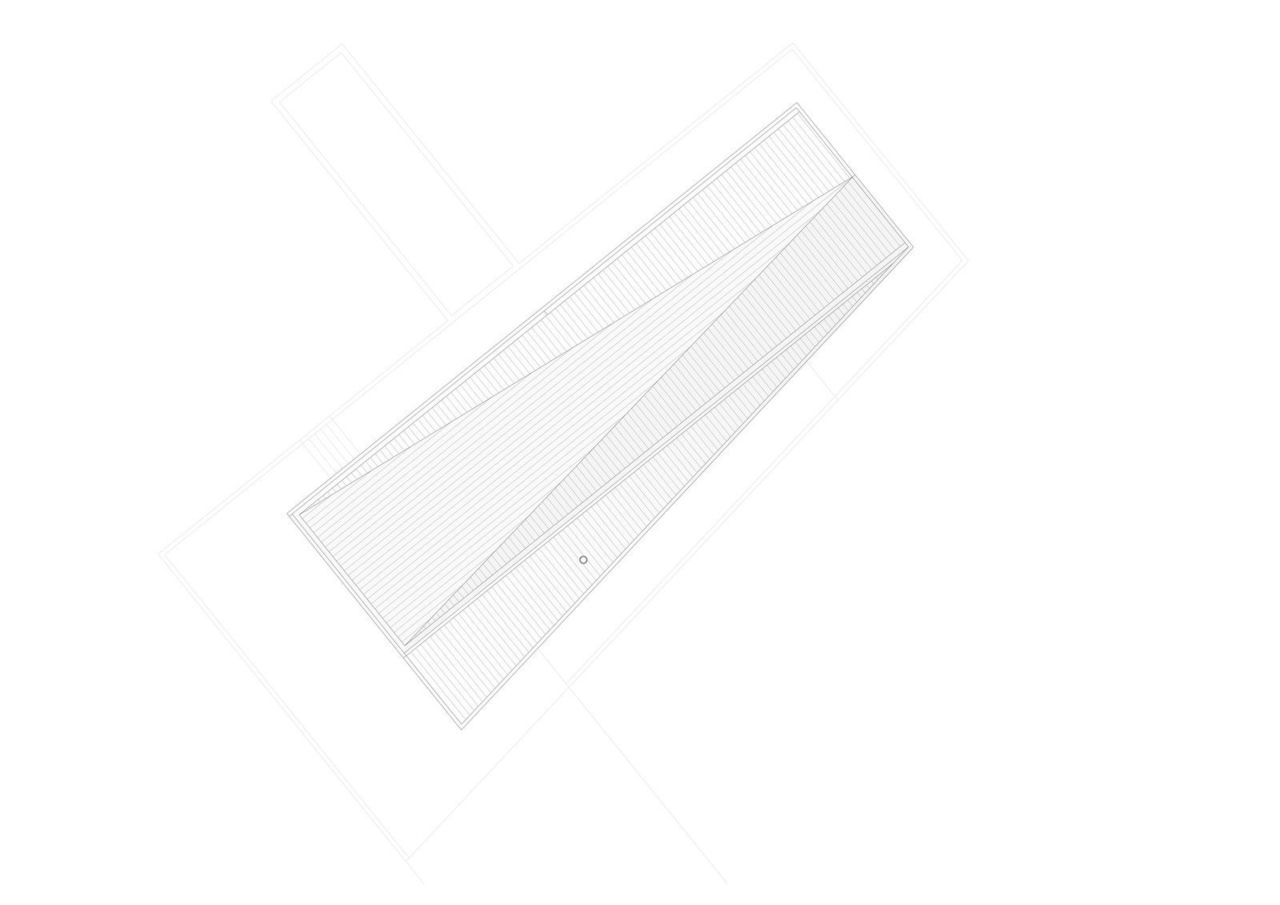