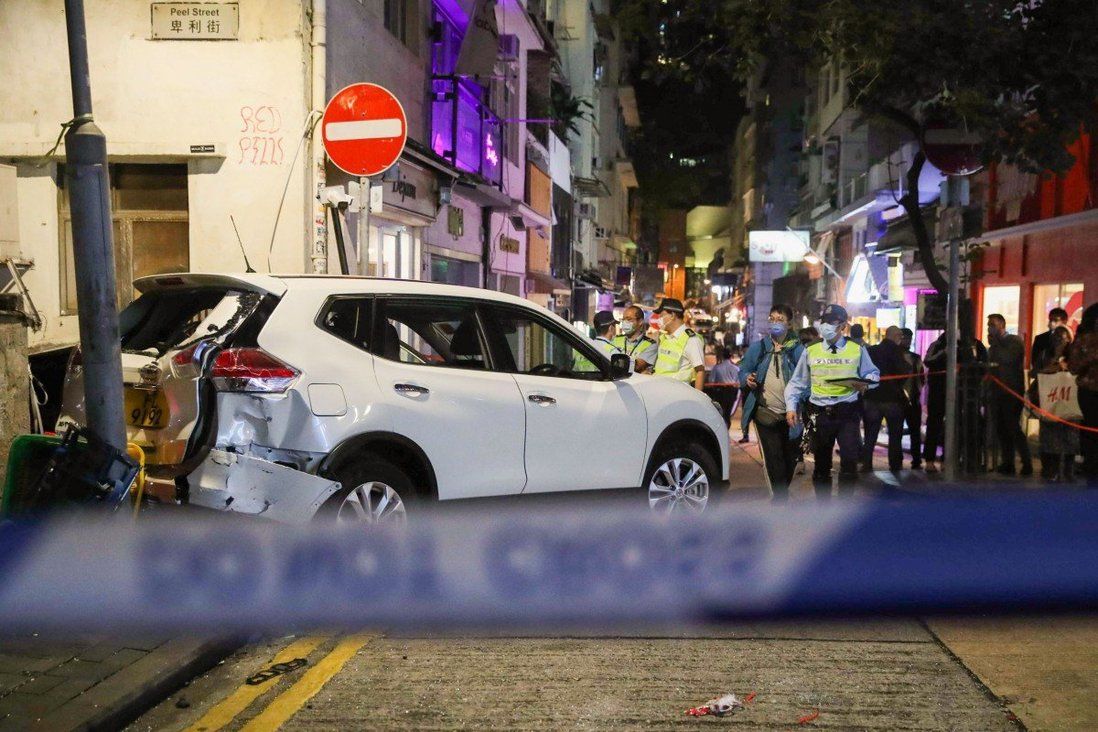 The driverless vehicle had rolled downhill for about 100 metres on Peel Street before shooting across Staunton Street and onto the opposite pavement.

Eight people were injured, two of them critically, when a car jumped a curb in a Hong Kong nightlife district packed with revellers on a busy Friday night, trapping one woman underneath. A 44-year-old female driver has been arrested.

A police investigation indicated the driverless vehicle had rolled backwards downhill for about 100 metres on Peel Street before shooting across Staunton Street in SoHo and slamming into pedestrians on the opposite pavement at about 8pm.

The runaway vehicle was only brought to a stop by a lamp post – left bent by the force of the collision – at the top of the stairs above a pedestrian-only stretch of Peel Street. Both the intersection and the street below are lined with popular bars and restaurants. 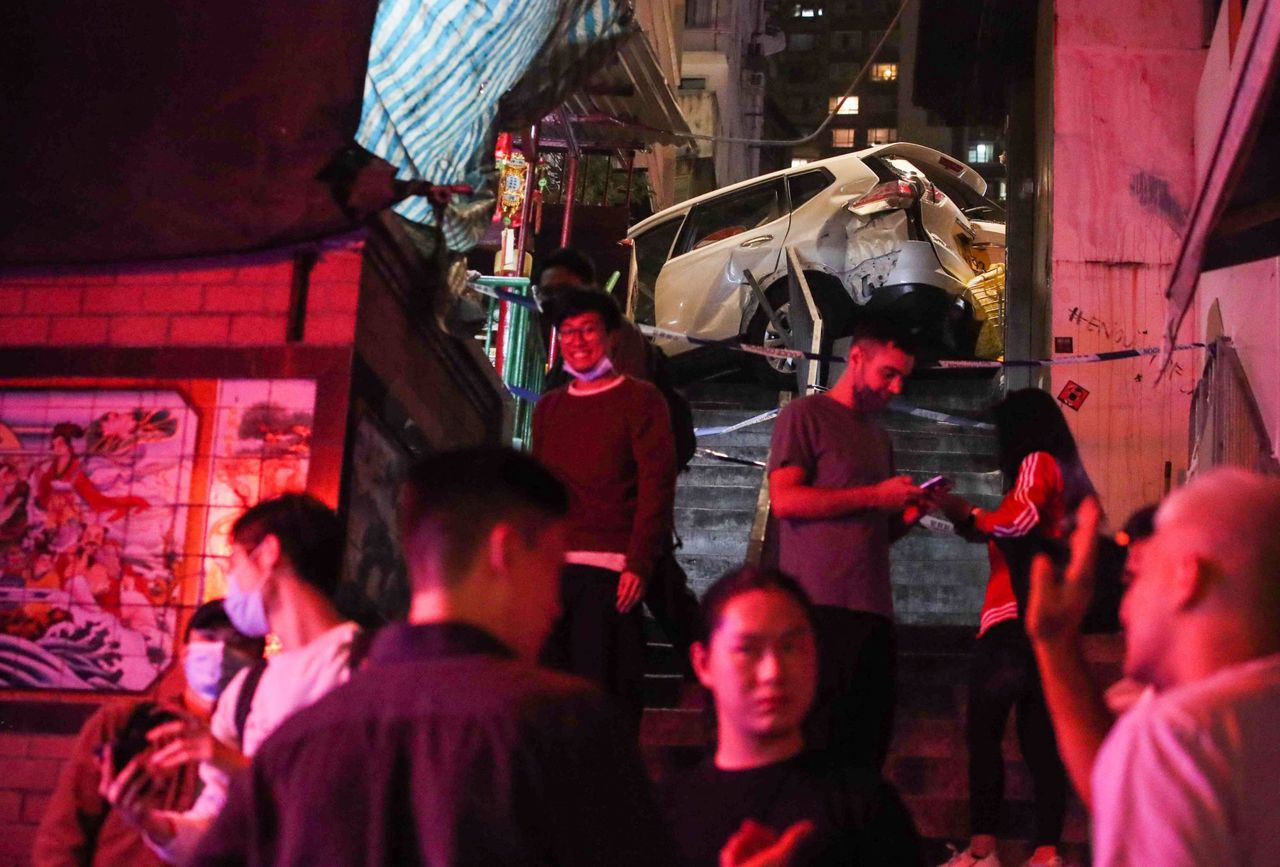 The accident took place at the top of a set of stairs above a pedestrian-only section of Peel Street lined with bars and restaurants.

Another four people, three men and a woman, were also in a stable condition after being sent to Ruttonjee Hospital for treatment.

A police source told the Post that the driver of the vehicle, a 44-year-old woman, had told investigators she might have forgotten to apply the handbrake after parking the car on the steep incline of Peel Street.

An accident investigation team from the police force’s Island region is looking into the case.

A witness who was near the scene of the accident told the Post she had seen a woman swept under the car.

“The girl was completely run over,” she said. “Her three friends were screaming and it was so heartbreaking.”

In a video circulating online, dozens of bystanders could be seen attempting to lift the vehicle off the trapped woman.

Another bystander described hearing a “loud metal crashing sound” when the impact occurred, adding that the door of the vehicle appeared to be ajar. 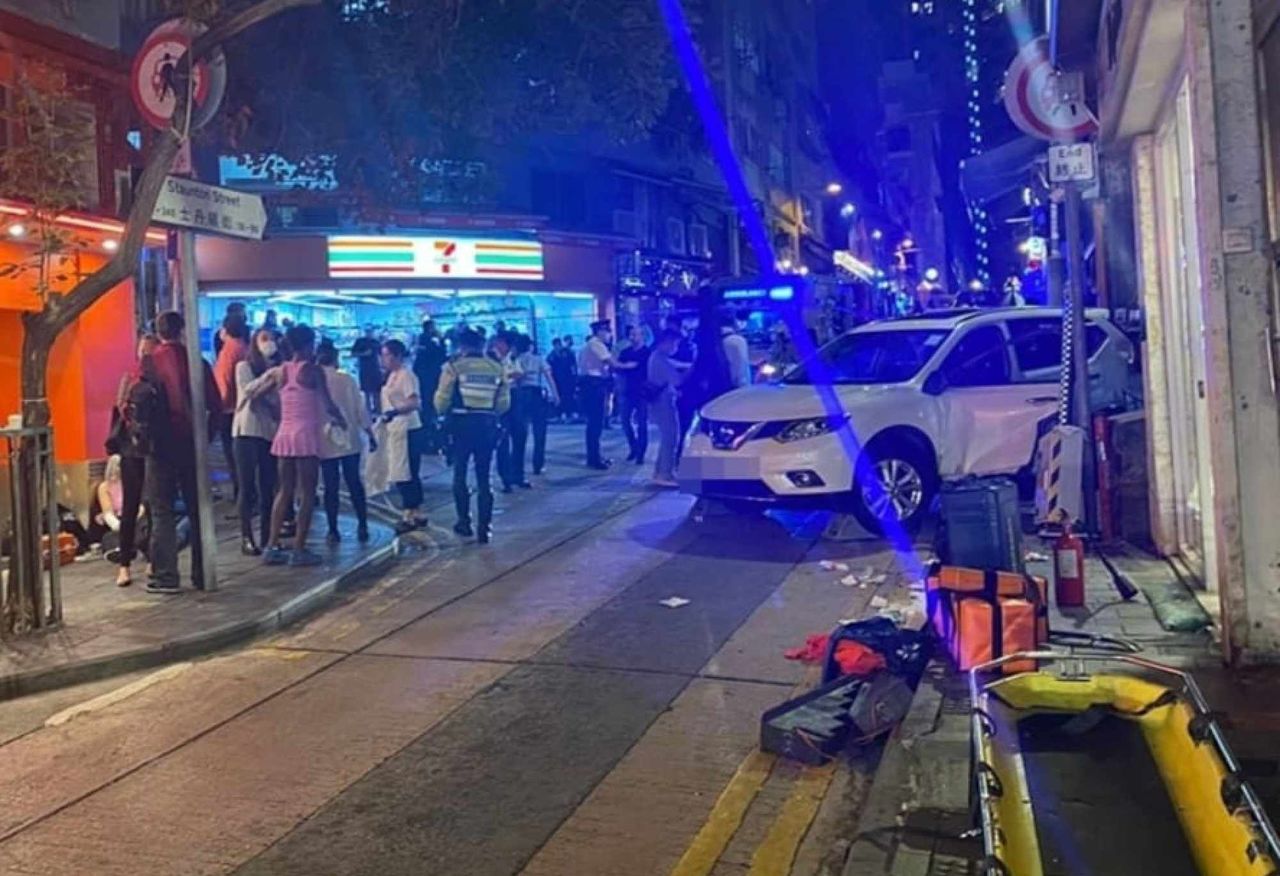 The crash took place opposite a 7-Eleven whose pavement is often packed with weekend revellers.

A woman who was drinking in the outdoor seating area of a bar on Peel Street told a local television station that chaos broke out as the white vehicle suddenly rolled past, with people yelling and “wine spilling everywhere”.

“We were left stunned,” she added.

The crash took place just across the street from a 7-Eleven convenience store whose pavement is often packed with partygoers on the weekends.