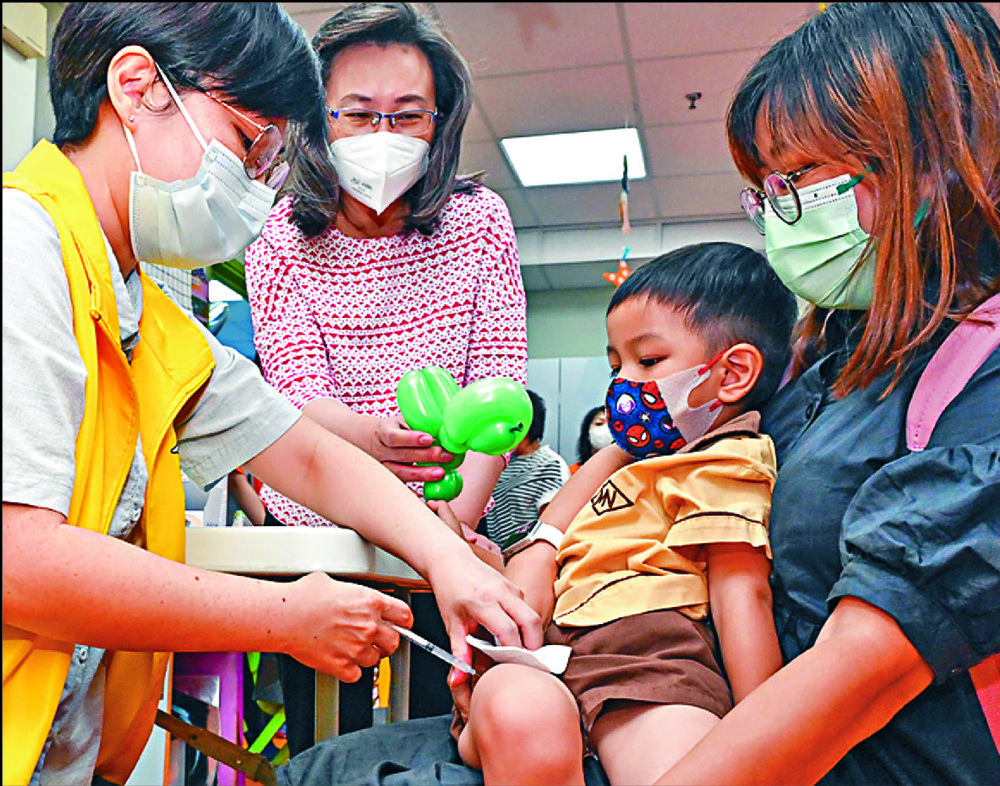 219 toddlers get their first jabs

Over 200 toddlers between six months and three years old took their first Covid jab yesterday - the first day of vaccinations for the age group, authorities said.
A government official said that as of 6pm 219 toddlers had received their first Sinovac shot, and another 739 bookings have been received. Around 150 of these bookings were made in the first half hour of registration opening.

Secretary for the Civil Service Ingrid Yeung Ho Poi-yan, who is in charge of the city's vaccination drive, called the response encouraging, and urged parents to get their children inoculated as soon as possible.

After inspecting an outreach vaccination service at a nursery center in To Kwa Wan, Yeung said: "There have been kindergartens lining up for outreach service for children in the next week."

She said since December 31, two toddlers below three as well as six children aged from three to 11 have died after contracting Covid.

One is a 22-month-girl who succumbed to Covid-triggered brain inflammation on Monday.

When asked about progress in procuring the toddler version of the BioNTech vaccine, Yeung said the Health Bureau is still in talks with manufacturer Pfizer.

The rate of symptomatic Covid infections in toddlers below three has surged by 50 percent in the past week while other age groups have only gone up by 10 percent, the University of Hong Kong's infectious disease expert Ho Pak-leung said.

The chairman of the Hospital Authority's central coordinating committee on pediatrics, Alan So King-woon, added: "We can see that most of the children admitted to hospitals, especially those who were seriously ill, are aged below three years."

So hoped the vaccination coverage in toddlers can exceed the 60-70 percent mark in those three to 11 years old.

Authorities are giving the Sinovac vaccine to children above six months at five vaccination centers. All of the centers have quotas available every day until September as of 7.30pm yesterday

Parents can also book the shot for their children at over 1,000 private clinics for free.
#BioNTech  #vaccine  #Pfizer  #Covid
Add Comment