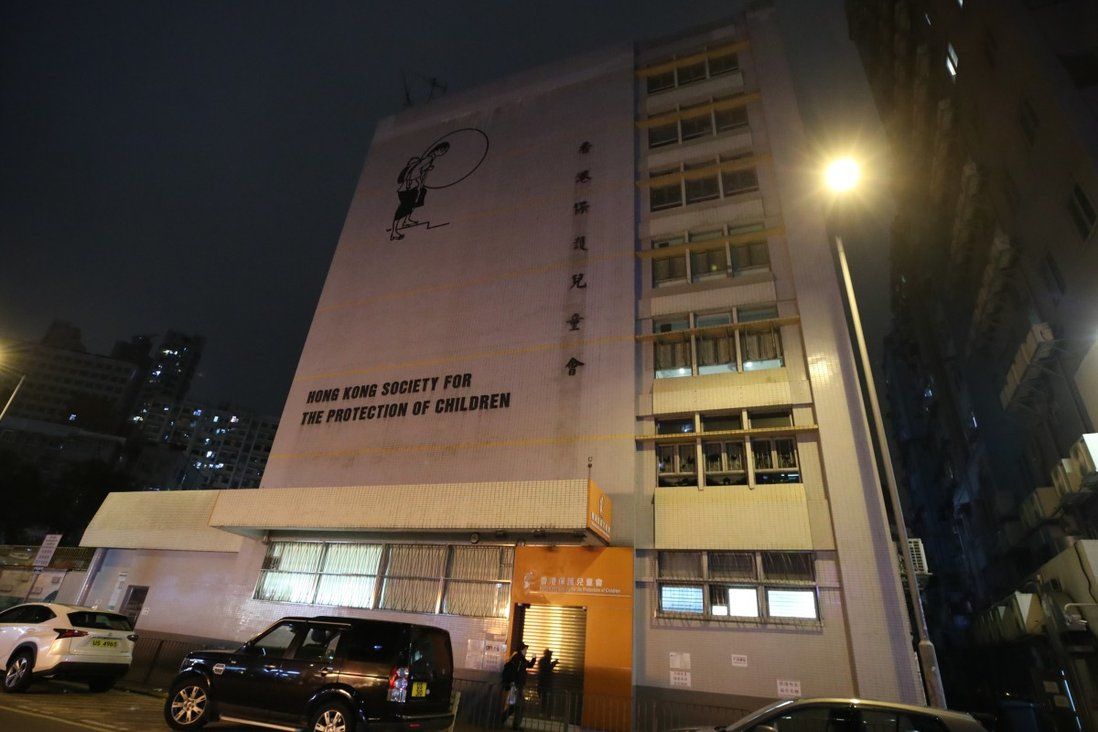 Susan Choy, director of Hong Kong Society for the Protection of Children, and Shirley Chui, superintendent of children’s home where alleged abuse took place, step down from their positions.

Two senior employees of a scandal-hit child protection group in Hong Kong have resigned over accusations of abuse after an independent review found rough handling of toddlers there had become “habitual”.

Susan Choy So Suk-yin, director of the Hong Kong Society for the Protection of Children (HKSPC), and Shirley Chui Wai-ying, superintendent of the Children’s Residential Home in Mong Kok where the alleged abuse took place, had stepped down, the group said on Wednesday.

Most of the staff at the home would also be replaced, it added.

The HKSPC released on Wednesday a summary of the interim investigation report it submitted to the Social Welfare Department a day earlier.

Twenty staff from the society have been arrested and charged after a police probe showed at least 35 children at the home were believed to have been abused. The employees allegedly yanked their hair, hit them on the head, slapped their faces and tossed them to the floor. 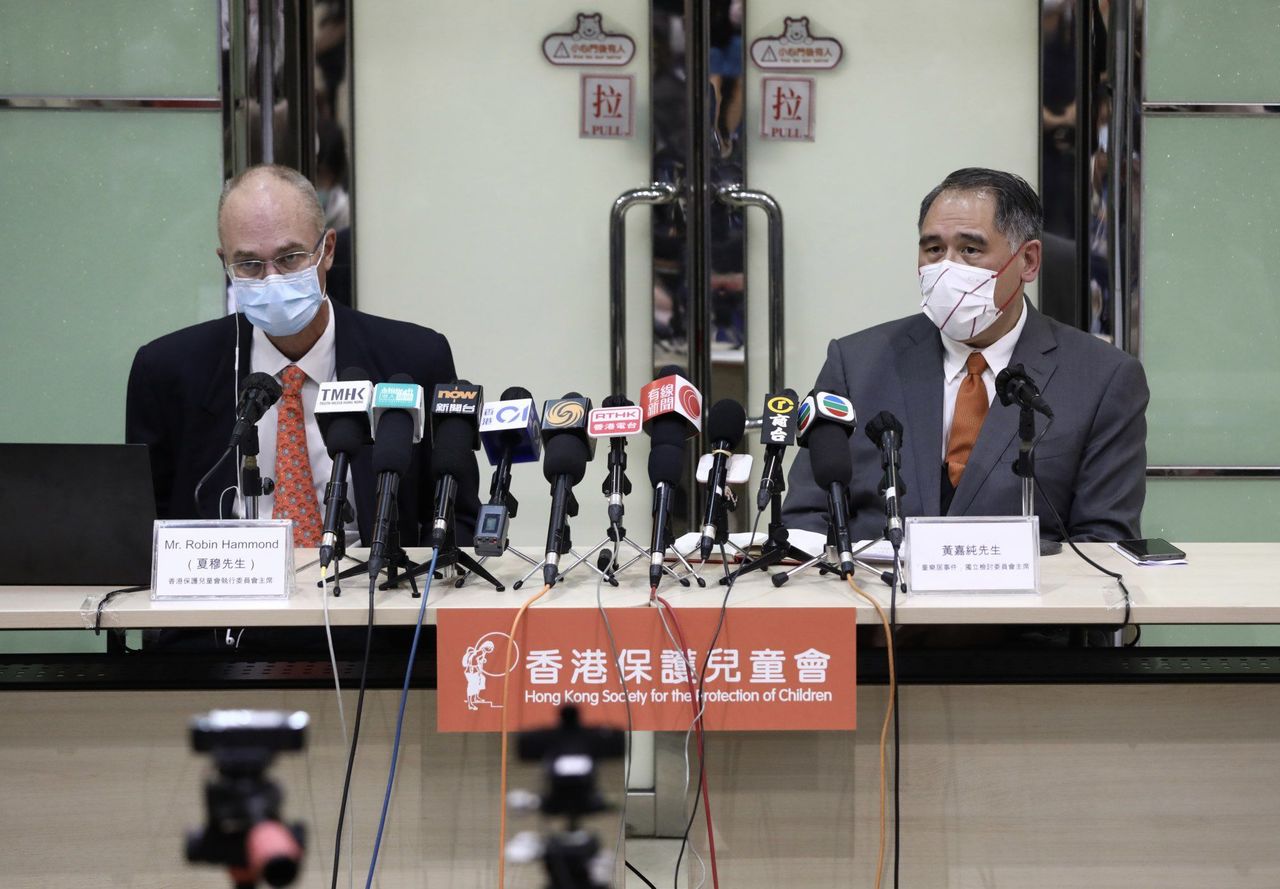 Robin Hammond (left), executive committee chairman of the Hong Kong Society for the Protection of Children, and Lester Huang, chairman of the independent review committee, speak to the press on Wednesday.

Before the alleged abuse came to light, the home had 61 staff looking after about 100 children aged up to three who have been abandoned or orphaned, or lack care because of family problems.

After three weeks of site visits, surveillance footage review and interviews with staff, the independent review committee the society appointed to investigate the scandal concluded that all levels of the organisation should be held responsible.

“They exposed the children in their care to unnecessary harm by failing to put in place the necessary systems to prevent and detect abuse, and to review its operations in the interests of the children,” the report stated.

Lester Garson Huang, chairman of the committee, said: “The entire organisation and its management team all should be responsible for the abuse cases.”

He said they found care workers at the home treated the toddlers roughly without regard for their feelings.

According to the report, surveillance footage revealed instances of rough treatment including a child being lifted by the collar and dumped to the mat, and another having her ears pulled.

“The rough handling of the children had become habitual and formed a culture at the home,” he said, adding that no one reported the practice and the home’s management team also failed to take the matter seriously.

The committee recommended the home replace all of its child care workers, including those who had not been arrested, to “terminate this existing culture”.

The committee also found the home lacked regular inspection of CCTV footage and staff training on prevention and handling of child abuse, with the last session conducted more than seven years ago.

It recommended the home reform its supervisory mechanisms, strengthen its staff training and set up a complaint and whistle-blowing system.

The report also found that the home had a high turnover rate of care workers over the last three years, with more than seven in 10 of the staff having less than three years of experience looking after children.

The worsening quality of services, coupled with a huge workload, had also contributed to the alleged abuse at the home, Huang said, adding that his committee would review the HKSPC’s other service units soon.

Robin Hammond, chairman of the HKSPC’s executive committee, said the society acknowledged the report’s findings and would adopt all of its recommendations.

The society has already suspended or terminated the duties of the 20 arrested employees, and another seven staff at the children’s home have resigned.

Currently, there are 34 care workers, including seven deployed from the group’s other service units, looking after 61 children at the home. The society said 27 of these workers would be replaced in phases, depending on the recruitment progress.

Hammond said the group would invest more resources in recruiting and retaining staff, strengthen internal control and management capacity, as well as training and counselling for staff and children.

“I wholeheartedly apologise for our failures. I’m particularly sorry for the children in our care,” he said. “We will do everything we can to regain your trust.”

Secretary for Labour and Welfare Law Chi-kwong said the incident revealed severe shortcomings across the HKSPC, from daily operations to supervision and staff training. The organisation had failed to meet the requirements of the Social Welfare Department and fell short of public expectations.

Law said the department would strengthen inspection of child care service providers to ensure they meet the standards for service quality and statutory requirements, with effective internal control and monitoring mechanisms in place.

The department would also require all residential homes for children to install CCTV systems to enhance surveillance and financial support would be provided if needed, a spokesman said.

Law added that the department would continue to monitor a review of HKSPC’s other services as it weighed whether the organisation was still fit to provide department-subsidised services in the future.

The city’s two largest pro-Beijing parties called for the release of the full report so that lawmakers could investigate the incident under the Legislative Council (Powers and Privileges) Ordinance.

“The top management’s resignation doesn’t mean the problem has been solved,” said Elizabeth Quat of the Democratic Alliance for the Betterment and Progress of Hong Kong. She demanded a separate investigation into the Social Welfare Department’s supervisory role over the home operator, which now runs 29 service units.

Bill Tang Ka-piu, of the Hong Kong Federation of Trade Unions, said as an immediate remedy, the government should consider suspending the funds allocated to the operator before ensuring its “serious management failure” was rectified.

After the alleged abuse surfaced, the department sent a 20-member multidisciplinary team to the home on December 27 to evaluate about 70 children staying there at the time.

A designated team was also stationed at the home on January 17 to monitor its daily operations until its improvement measures and operation met the department’s requirements.